It’s been quite some time since I tried a new bra as part of my quest to find a sleep/house bra.  Essentially, I am looking for a bra that is comfortable enough to wear around the house and sleep in if I wish.  In my cup size (KK/L) this has proven almost impossible to find, particularly with the fact that a non-wired bra would be my preference as I find it terribly uncomfortable to sleep in a wired bra.


Some months ago, I visited Leia Lingerie at Bluewater with Georgina from Fuller Figure Fuller Bust.  We received excellent service from store manager Leigh and our fitter Annie and they were aware of my search for a sleep bra.  They suggested I try a nursing bra from Royce called the Jasmine.

I was not averse to trying a nursing bra as I have done so in the past and know that with the large cup size I require this might be the only way of solving my quest. 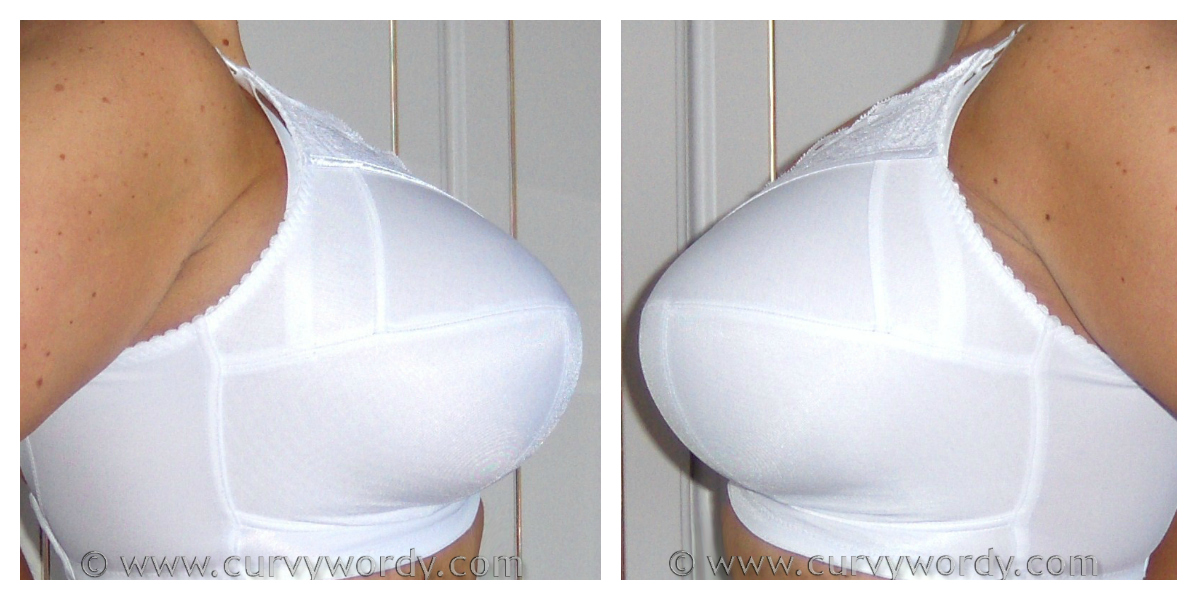 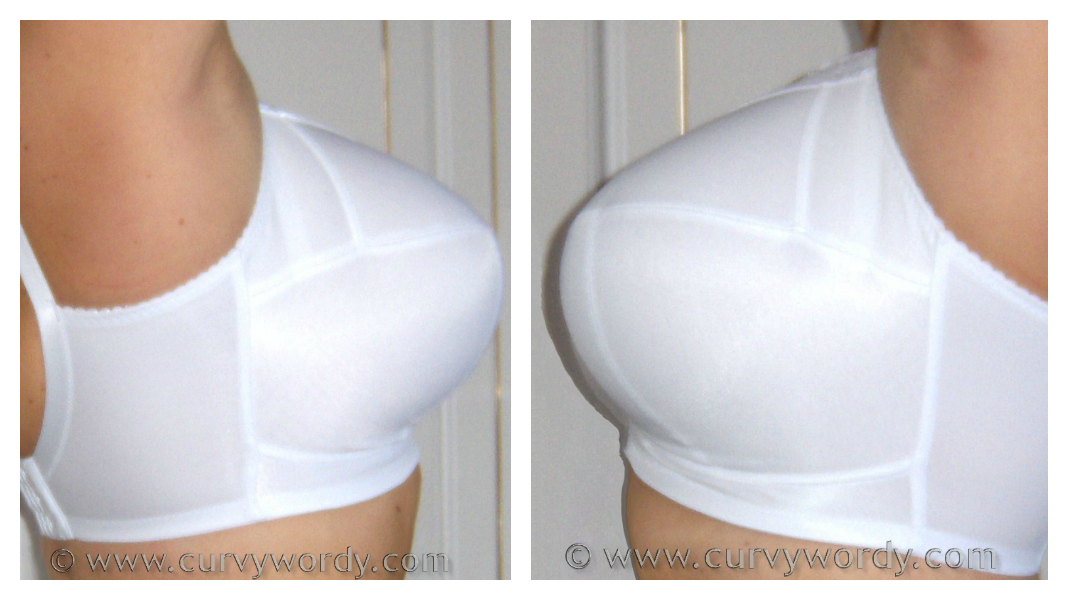 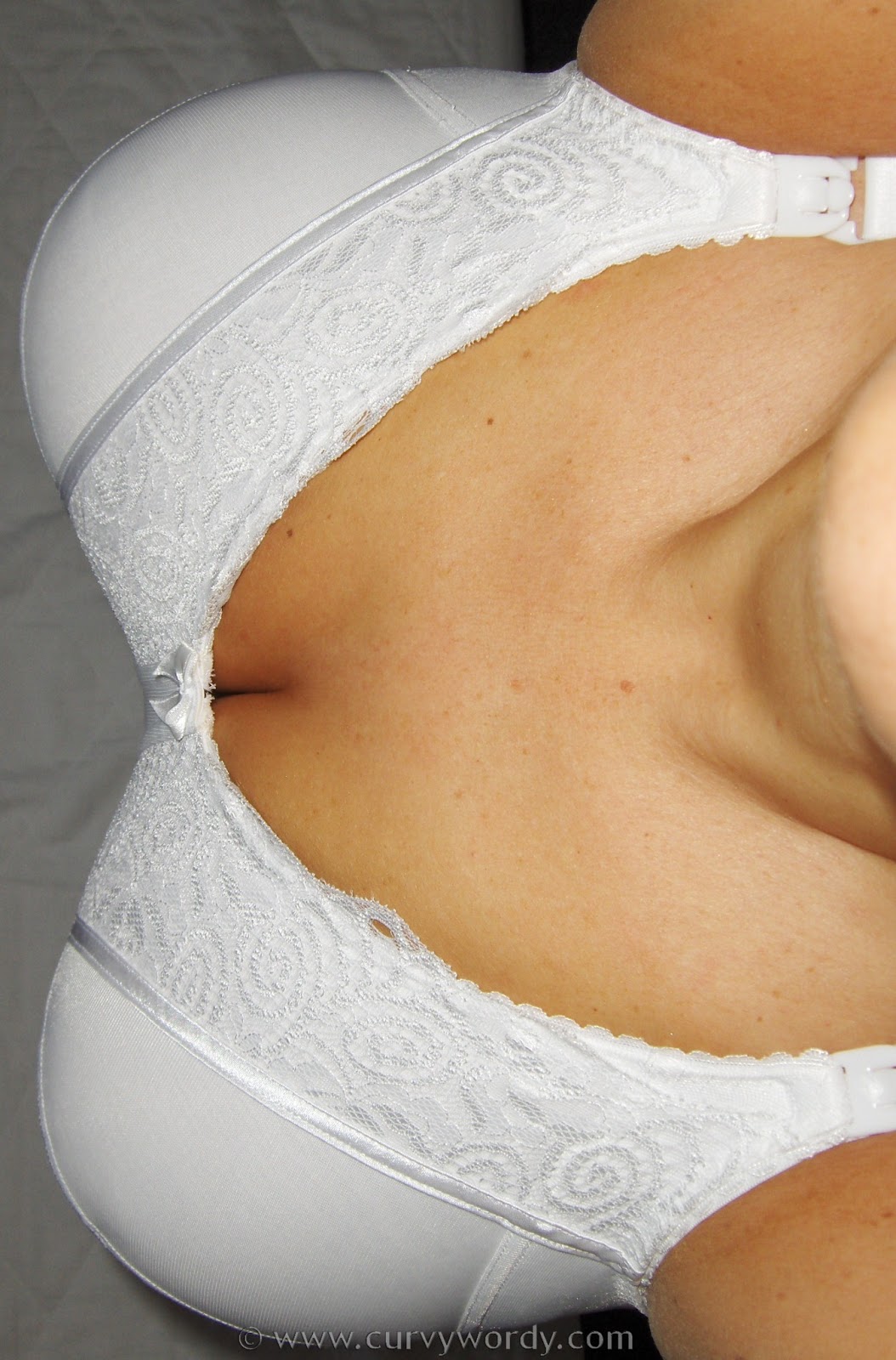 Of course, most nursing bras and non-wired bras will tend not to look pretty and sexy – after all, they are supposed to be practical and somewhat industrial.  Their main job is to support the bust and they leave prettiness and sexiness to their lacy wired cousins.

And the Royce Jasmine doesn’t do a bad job at all.  The cups are cotton lined for comfort so  it feels cool and soft.  They have some pretty lacing along the top portion of the cups, which is a nice touch and makes the bra less basic in appearance.

However, as you can see from the pictures above, particularly the one showing ‘my view’ looking down on the bra, it’s clear that the 32L is too small in the cup for me.  If my calculations are correct, the Jasmine is the UK equivalent of a 32HH, so it’s no wonder I found it rather snug!

The tops of the cups cut into my breast tissue, although less so than many of the non-wired bras I have tried previously.  The width of the cups was actually good for me – often by taking a larger cup size I find they get impossibly wide but as the photos show, this is pretty much perfect for me.  However the depth wasn’t quite there and I felt the bra squashed my boobs somewhat.

A common issue I have with non-wired bras is the central gore.  I think it would be impossible to find one that completely separates my boobs and sits as flush to my chest as I would expect with a wired bra.  The Jasmine actually does a decent job of separating my boobs, although there is a small amount of meeting in the middle due to the cups being too small.

In case you’re reading this because you’re pregnant and thinking of giving this bra a try, I had to mention the drop tabs.  They are easy access and I imagine it would be really simple and comfortable to pop the bra open to feed your baby.  This system is so clever as the breast remains supported and it is relatively straightforward to snap the tabs back in place.

The band fastens with four rows of three hooks and eyes so there’s plenty of room for adjustment due to weight fluctuations during pregnancy.  Of course, I am not pregnant and I was trying this bra for different purposes, but the fact this band can be tightened up to four hooks and eyes is a real bonus whether you’re pregnant or not.

I found the Jasmine’s band to be extremely tight.  In fact, I think I should have gone for a 34L, which would have been roomier in the cups as well as in the band.  I have worn this bra several times since getting it and I have noticed that, due to its construction, the bra’s band sits lower on my ribcage than my wired bras and I think this makes all the difference.

The straps are fully adjustable and very comfortable.  They have plastic clasps and adjusters so there’s nothing to dig into your skin or cause discomfort.

The bra comes up very high under the arms and I found it cut in a bit.  I think this is a similar issue to the band sitting lower on my body – I am accustomed to my bras sitting in certain positions and when I try a bra where this is different it takes quite a bit of getting used to.

Overall, I do not think I have found my sleep/house bra with the Royce Jasmine but I do think it’s a great option for any new mums looking for a breastfeeding bra.


Here is a list of all my previous sleep/house bra reviews: