The Royce Charlotte is another soft cup bra which I reviewed back in the early days of my blog.  I tried it in a 36H but found it to be completely unsuitable for me.


The Charlotte is available on Bravissimo in sizes 28DD-J and 30-40DD-K (also available in a nursing bra).  It’s a great selection of sizes and the promotional picture suggests good support and shape.


I ordered a Charlotte from Bravissimo in a 34K as I felt the smaller band and larger cup might just work for me. 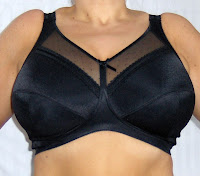 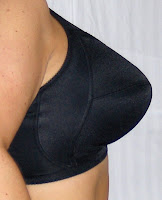 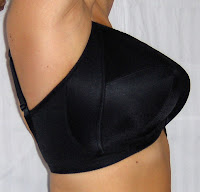 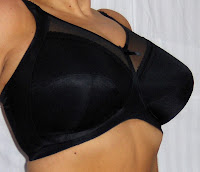 At first view, this bra might look like it suits me well.  The cups are clearly large enough in volume and the band fits me well.


The cups are made from a soft poly cotton mix fabric and have a pretty polka dot mesh section along the top.  The straps are wide and comfortable and there are four rows of three hooks.


However, the straps only adjust part way (not even halfway), meaning that I cannot give my breasts as much support as I would like.  These pics show the straps fully adjusted.


The tops of the cups cut into my breast tissue, giving me slight quadraboob.  I’m not overly fussed about this for a bra that I would wear at night and around the house but surely it can’t be good to wear a bra that does this?  I know some of the Ewa Michalaks I own are a little small in the cup but they certainly don’t cut in as significantly as this bra does.


My biggest gripe is that the cups are too shallow for me.  This 34K is the largest cup available and yet my breasts still met in the middle – I hate it when that happens!  I guess to some extent this is inevitable for unwired bras as there is no central gore to hold the breasts apart but even so I was disappointed at how much spillage into the middle there was with the Charlotte.


I think this is a very pretty bra and Royce have tried hard to make it pretty and appealing to a younger market but for me it doesn’t quite hit the spot.


You can read my other reviews of the soft cup bras I’ve tried here: