I have reviewed the Royce Sadie in one of my earlier posts but wanted to try it again in a smaller band and bigger cups.  I found this bra available on Bravissimo, which is a great place to find large cup bras.


The Sadie is also available as a nursing bra on Bravissimo.


So, to recap, the things I am looking for from a sleep bra are comfort, separation, support and shape.  So far I have come close with the Triumph Doreen but their sizing does not go small enough in the band and large enough in the cup for me. 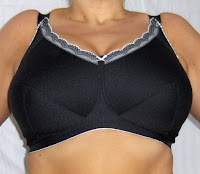 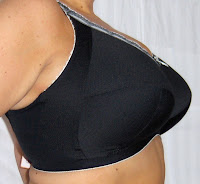 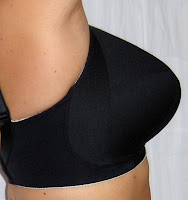 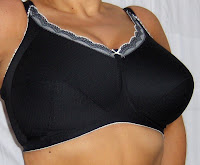 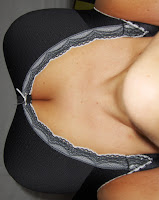 The cups on the Sadie are made from a faintly spotted poly cotton fabric, which contains X-Static.  This component is designed to give the best performance and comfort for the fabric by eliminating odour and static, regulating temperature and having an antibacterial effect.  The tops of the cups are edged in a pretty white and black lace, which I am guessing must be made with cotton as it is so soft and not at all scratchy.


The fit was so much better than the 36H I tried previously.  The cups were, of course, more generous and therefore gave me better shape.  The band was tighter and provided more support and because of this I found the straps more comfortable.  Interestingly, I had found the Royce bras I tried on last time very difficult to put on; this one was a breeze!


However, this was still not the perfect bra for me.  The tops of the cups cut into my breast tissue, creating a slight quadraboob, and I felt there was not enough separation between the cups.  This meant that my breasts were touching in the middle and I am sure that would lead to a sweaty cleavage at night – not nice!  I felt like I wanted to adjust my boobs all the time.


The straps are not fully adjustable and in fact don’t even adjust by half.  This was a problem for me as I wanted to make them shorter but there was no way to do that.  The band is very stretchy, but feels like it would not stretch with wear, and fastens with four rows of three hooks.


I feel that Royce bras are excellent quality but again I am finding a problem with cups being too shallow for me.  Had the cups been deeper, I would not have had such a problem with breast separation and therefore think I would have been more likely to keep this bra.

You can read my other reviews of the soft cup bras I’ve tried here:

And there’s more to come soon so stay tuned!