For a long time, I have been looking for a sleep bra.  My definition of a sleep bra is one which is comfortable enough to wear in bed (every night if wished) and also around the house during the evenings and at weekends.


So far, I have only tried non-wired bras in my quest.  I have tried soft cup bras, sports bras, maternity bras and even a nursing bra, but nothing yet has quite hit the spot.  I have stumbled every time, with the main reason being that I don’t get separation of my breasts in non-wired bras.  This has lead me to wonder if I might be able to find a wired bra which would be comfortable enough to sleep in.


Now, my Ewa Michalak bras are super comfortable.  I wear them each and every day and it’s a pleasure to do so.  Rarely do they dig in, rub or give me any kind of pain or discomfort so they would be ideal to wear in bed as well.  But, as I wear them every day, I think it would be unhealthy to wear them at night as well so I am on the lookout for an underwired sleep/house bra, as well as a non-wired one.


A few weeks ago, I tried the Bravissimo Inspire Sports Bra in black.


I was so impressed to see that Bravissimo had produced an own brand sports bra which went all the way up to a K cup – brilliant!

I ordered this in 30K and 32K.  Firstly I tried the 30K and the band was so firm that I could not get it done up.  I admitted defeat and moved on to the 32K instead: 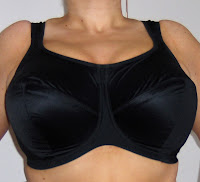 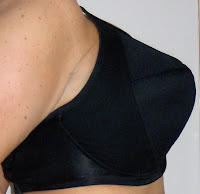 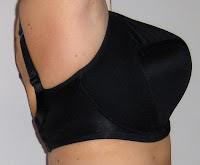 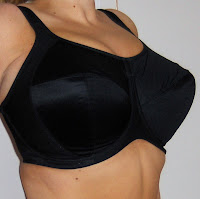 In general, this really wasn’t a bad fit at all.  It gave me a great uplifted shape (if a little pointy) and the fabric was lovely and soft.

The 32 band was a good fit and fastened with three rows of four hooks so it felt very secure.  However, it felt a bit loose after a few minutes’ wear so I wonder if the 30K I received had been mislabelled and was in fact a 28.  It really did feel as if I ought to be able to size down in the band fairly easily.

As you can see from the photos above, the cups were too small for me.  Sigh.  The 32K is the equivalent in sister sizing to a 30KK and a couple of months ago I was fitted into 30K Freya bras, so this should have fitted me no problem at all.  But it didn’t.  The tops of the cups cut into my breast tissue and, although the cups were pretty good depth-wise, the wires were too wide and ended up in the rear area of my armpits.  Ouch.

I see from the product reviews on the Bravissimo website that some customers have suggested going up a couple of cup sizes to get a good fit.  Sadly this was not an option for me as K is the largest cup this bra goes up to.

The central gore was interesting on this bra.  It came up fairly high but there was an extra bit above where the wires ended.  I am sure that doesn’t make things very clear so I have taken some pictures to demonstrate this: 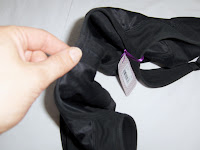 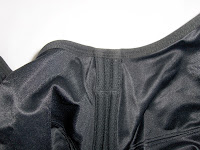 The third pic above should show very clearly the point I am trying to make.  It’s like an extended central gore…but without the wire.  I am not sure what it was supposed to achieve and whether it is there on the smaller cup versions of this bra (if you have this bra please let me know!) but on me it did not work at all.  The wires sat firmly against my sternum but this section stood away like a central gore on a non-wired bra.  It felt very odd because it was like it half-fitted!  I know most Bravissimo own brand bras have too-short wires under the arms but I have never experienced it on the central gore before – and so intentionally: note that the top inch (ish) of the central gore is sewn up so the wires cannot enter.  I don’t think this helped with the fit of the cups but because they were too small I can’t make a completely accurate judgement on this.

My major frustration with this bra was the straps.  They were only 1/3 adjustable because they were ‘comfort’ straps – padded straps which are wider than usual at the point where the straps rest on the tops of the shoulders.  This extra wideness means that this section couldn’t fit through a regular bra strap adjuster so only the lower back section is adjustable.  This wouldn’t necessarily be a problem but the fact that the straps worked themselves loose within moments of putting the bra on most certainly was!  I note this is a problem experienced by other wearers (as seen from the reviews on the product page) and some have said they’ve overcome it by stitching the straps in place once they are happy with their length.  Great idea – but surely this should not be necessary?


I would have loved to have put this bra through its paces as a sports bra but as the cups were too small I didn’t want to take the chance.  I also didn’t sleep in it and simply returned it to Bravissimo (who are a FAB retailer to deal with – superb customer service, easy-peasy returns and lovely quality items).  They seem genuinely interested in helping all their customers find the best fit, regardless of the number of tries it takes them…several in my case!!

For me, this bra was not a keeper but if it had been available in a cup size to fit me I would have been very pleased to give it a go.  Even though the 32K was too small, it felt very supportive and comfortable.  I would recommend this bra if you are on the larger end of the cup size scale and looking for something to wear whilst working out, but do be aware that you might need to try a different cup size than your usual one in order to get the best fit.

You can read my other reviews of the potential house/sleep bras I’ve tried here:

I won’t give up on my search so no doubt I’ll be posting more reviews very soon!