Regular readers of my blog will know about my ongoing mission to find a bra which is comfortable and supportive to wear at night and around the house.  It’s not an easy task as I need bras with deep but fairly narrow cups and this is very hard to find in wired bras, let alone non-wired ones.

The latest bra I tried is the Emma Jane maternity bra 430 in 34K.  I bought it from eBay here.  It’s worth noting that this particular style is no longer available on the Emma Jane site so I guess it’s a discontinued style but there are various similar bras on offer instead. 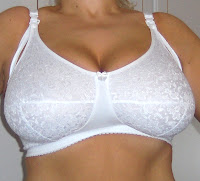 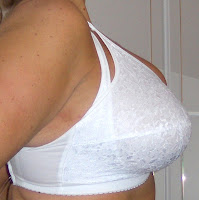 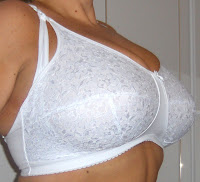 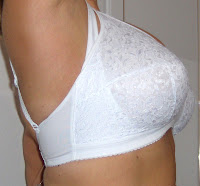 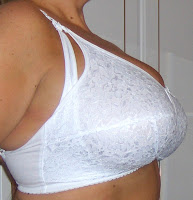 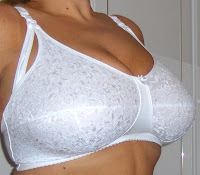 (Apologies for not having the band straight in the first pic!)

I must admit that I hadn’t read the description properly and wasn’t expecting to receive a breastfeeding bra; I was thinking it’d be something more like the Panache Sophie Support Bra I tried a little while ago.  When I realised my mistake I decided to give it a try anyway as you never know where you might find a comfy bra!

Well, this bra was indeed pretty comfortable.  The band was slightly loose on me on the first set of hooks (of which there are only two, by the way) so I wonder if the 32 band might have been better.

As a non-wired nursing bra I was very surprised to find this had interchangeable straps.  The ones which are on the bra in the photos are slightly wider, comfort straps (although the wider section ends up being on one’s back rather than shoulders, which is bizarre) and the spare ones are regular width straps.  I wondered after I’d posted it back to the seller if it would have been possible to make this into a multi-way bra but I don’t see why not.  This would have made it a really flexible non-wired option.

Unfortunately with this bra I suffered the same problem as I have done with many others – the cups are simply not deep enough, particularly in the top half of the cups.  Bra manufacturers seem to think that if they make the cups wider then they will fit larger busts.  This approach may suit some people but sadly not me.  The tops of the cups cut into my breast tissue and gave me an odd little quadraboob area in the middle of my chest.  They also pushed my breasts downwards, giving me that ‘ski-slope’ look – not flattering at all!  However, the bottoms of the cups gave a nice shape so I think Emma Jane are not far off making a suitable non-wired bra for me.

I think this bra would be great for ladies with smaller busts as I think perhaps the weight of larger boobs does not help create a good shape in non-wired bras.

Trying this bra on made me wonder what on earth I would do if I ever ended up breastfeeding (I’d have to meet Mr Right first, of course!!).  I would have such a difficult time finding a nursing bra which fitted me properly – I wonder if I would give up on the idea and stick with my Ewas instead…