I have been trialling some of the new CHP styles recently released by Ewa Michalak and my latest one to review is the CHP Koktajl.

It’s a very beautiful bra with black lace overlaid on lightly foam padded turquoise cups.  It reminds me somewhat of the PL Turkus and HP Turkus…but more on that later!

The HP, CH and CHP styles are not available in the largest cup sizes because it is felt that they do not offer enough support for such heavy breasts.  However, I ignore this advice and squeeze myself into a couple of cups too small in order to have a wider choice of bras and styles from EM – this is not something I would recommend but it’s down to personal choice.  It means that I have to adjust my bra and boobs fairly regularly in order to make sure they are looking their best and comfortable but this is an effort I am willing to make. 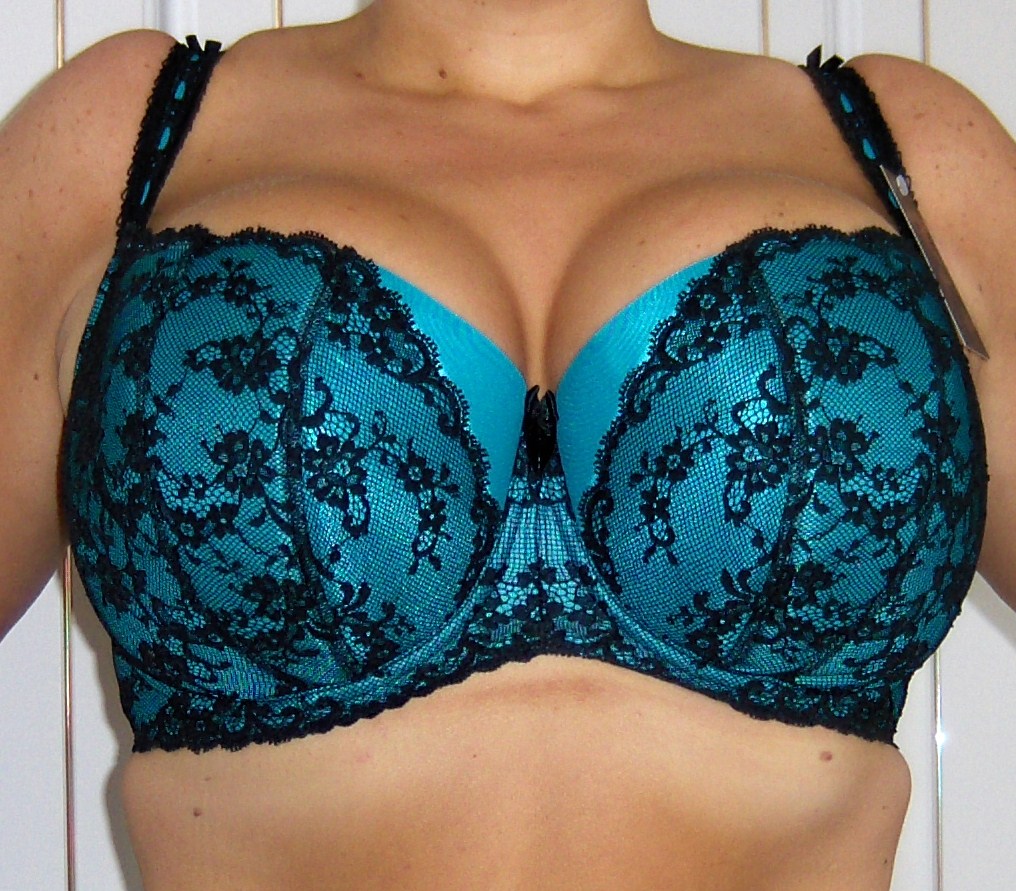 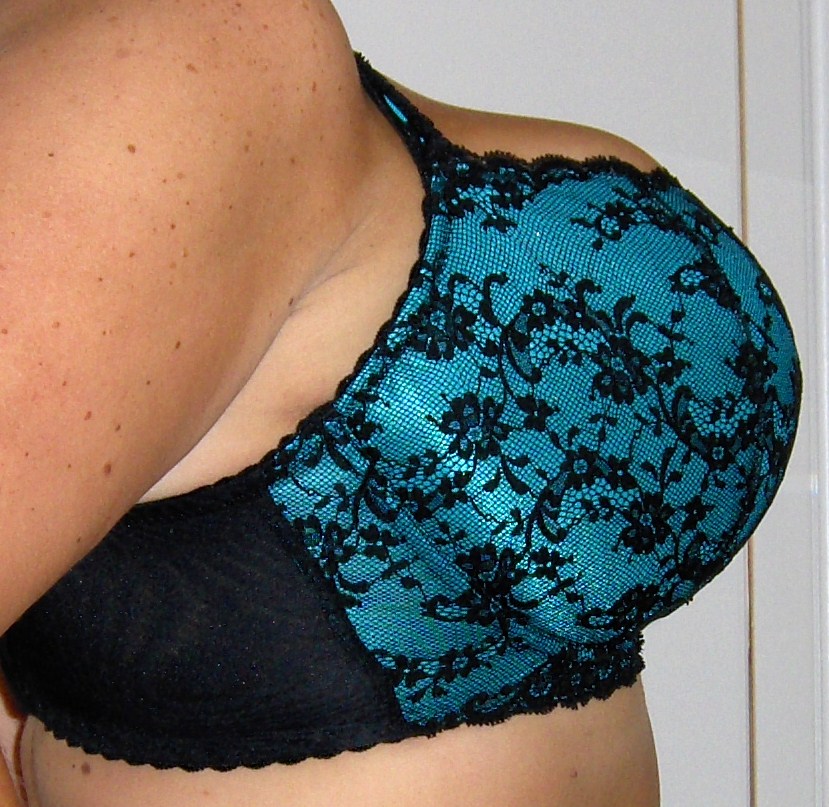 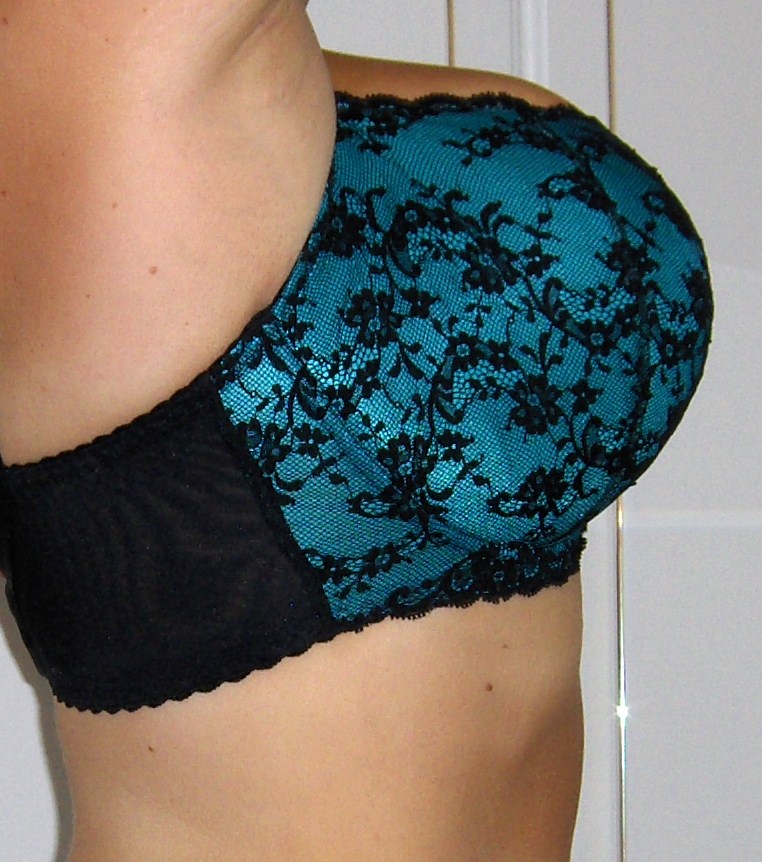 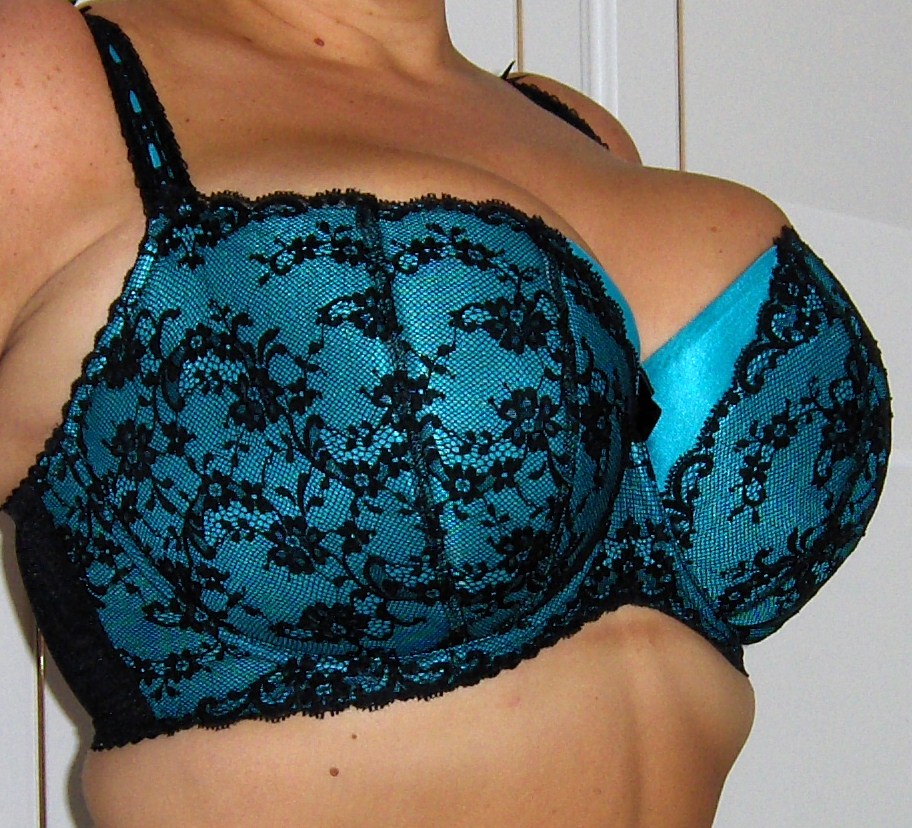 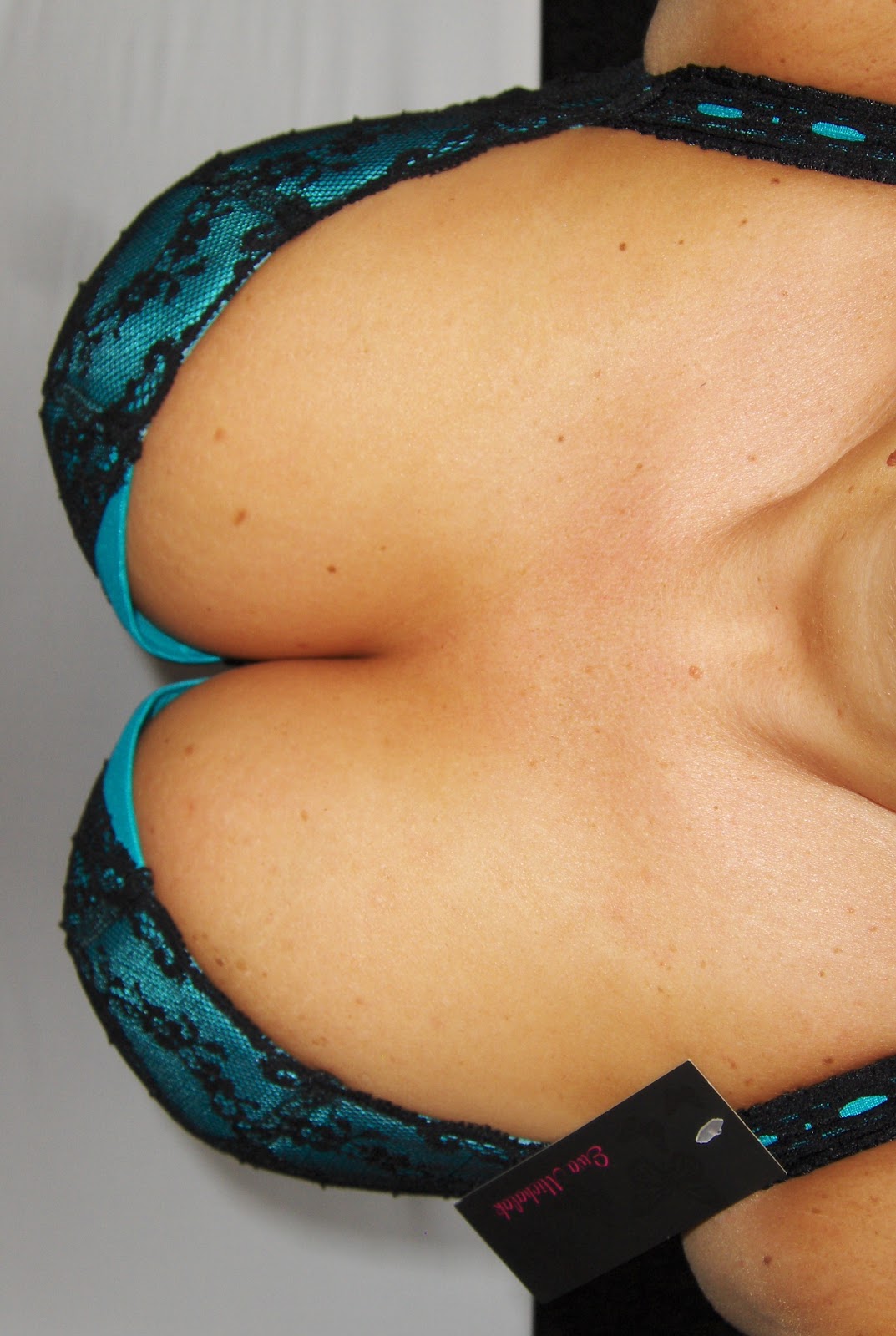 Not surprisingly, it turned out to be a bit too small in the cup for me.  I think even just one size up would be a great improvement but probably in this one I would do best in the same size as I wear in PLs. 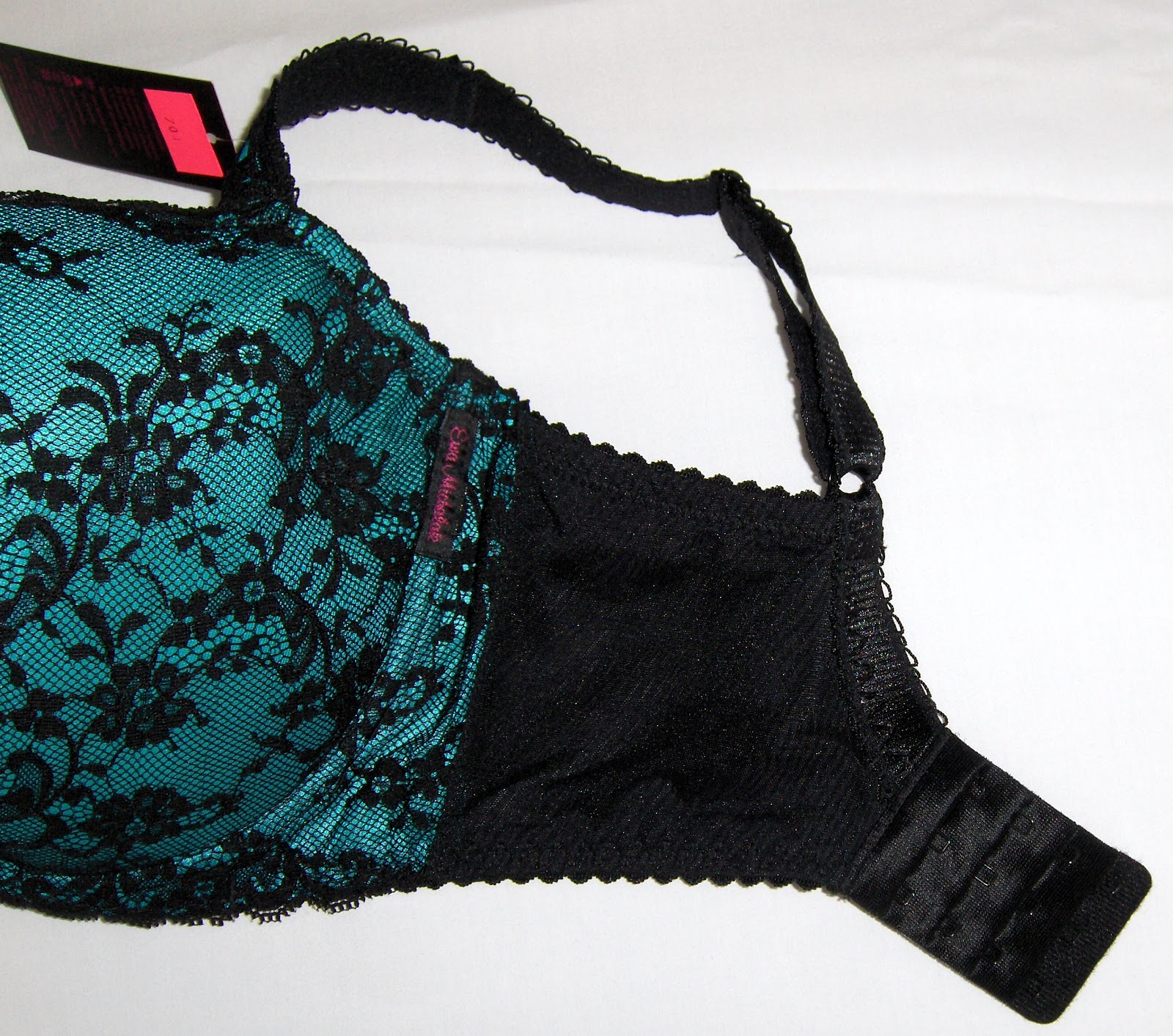 The straps adjust halfway and are much less stretchy than those on the other CHPs I have tried.  Contrary to the other CHPs I’ve tried, these straps were a good length for me, and they were not too wide set either.  The front half of the straps only have minimal stretch and feature black lace overlaid on turquoise material, as with the cups.  There’s a cute little black bow on the halfway point of the straps – a nice touch.  The back half of the straps has some stretch for comfort but is still pretty unyielding, which is a good thing in my opinion.  All to often bras have straps which are not strong enough – this one is brilliant!  Two more things make these straps pretty much perfect: the adjustable back halves have embellishments down the sides which mean the adjusters stay put instead of sliding down; and the straps connect to the band with plastic circular rings.  Superb!

The 32/70 band is fairly loose on me so I think I would have done better with a 30/65JJ.  It fastens with four rows of three hooks, offering more support than the CHP Groszki i Róże and the CHP Kurczak I tried.


The wires are a good width for me but I do notice how they come up further under my arms than the PLs.  It’s not so much that it irritates but more that my body is not used to having wires which run a bit higher.  The central gore is brilliant and sits flush on my sternum without feeling uncomfortable.


This bra is so, so pretty.  I did not get matching briefs with this one but for those of you who already have some for the PL or HP Turkus I have good news for you.  The turquoise colour used for this bra is exactly the same colour as the Turkus so it’s easy as pie to mix and match the undies, as you can see below… 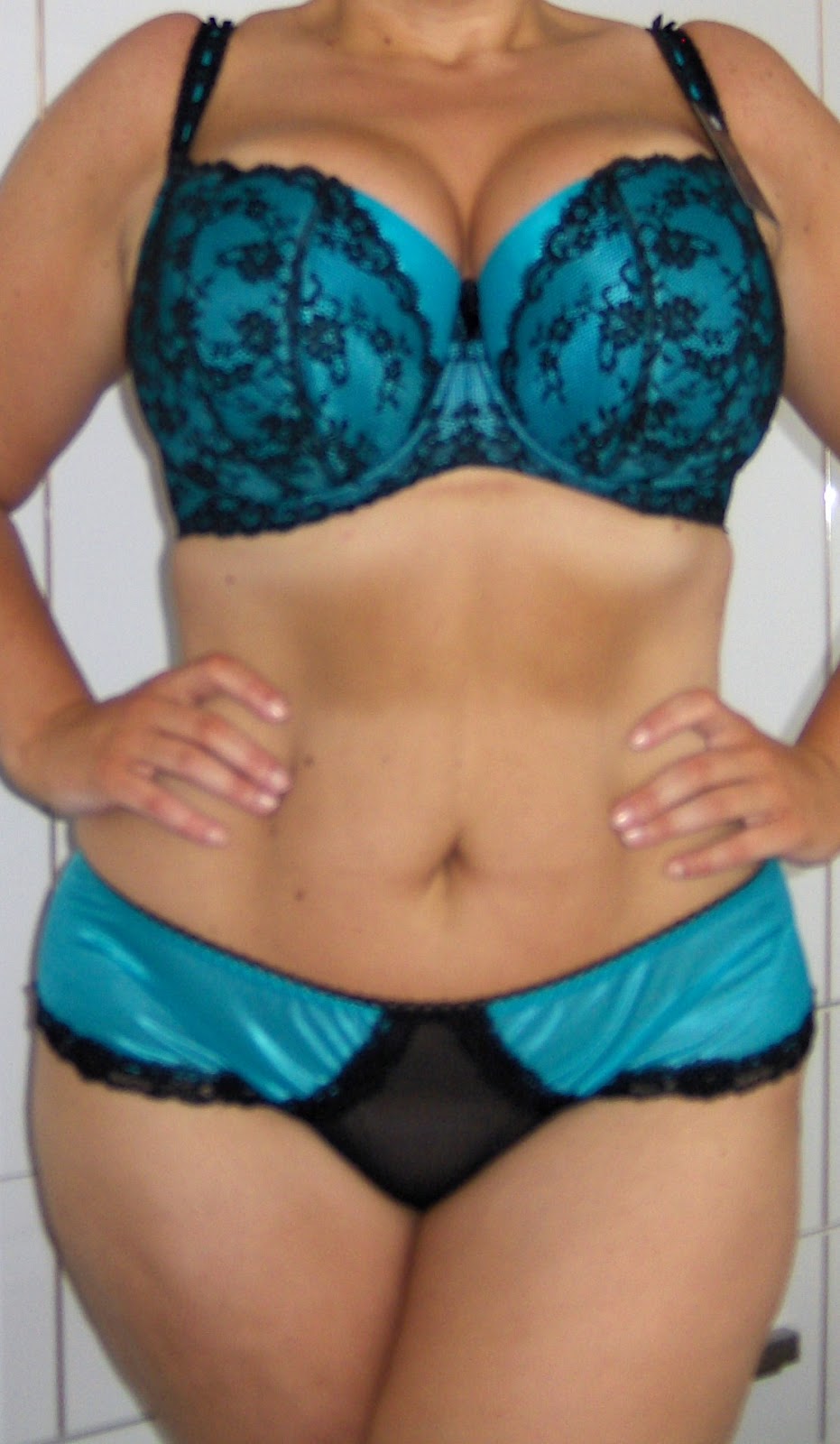 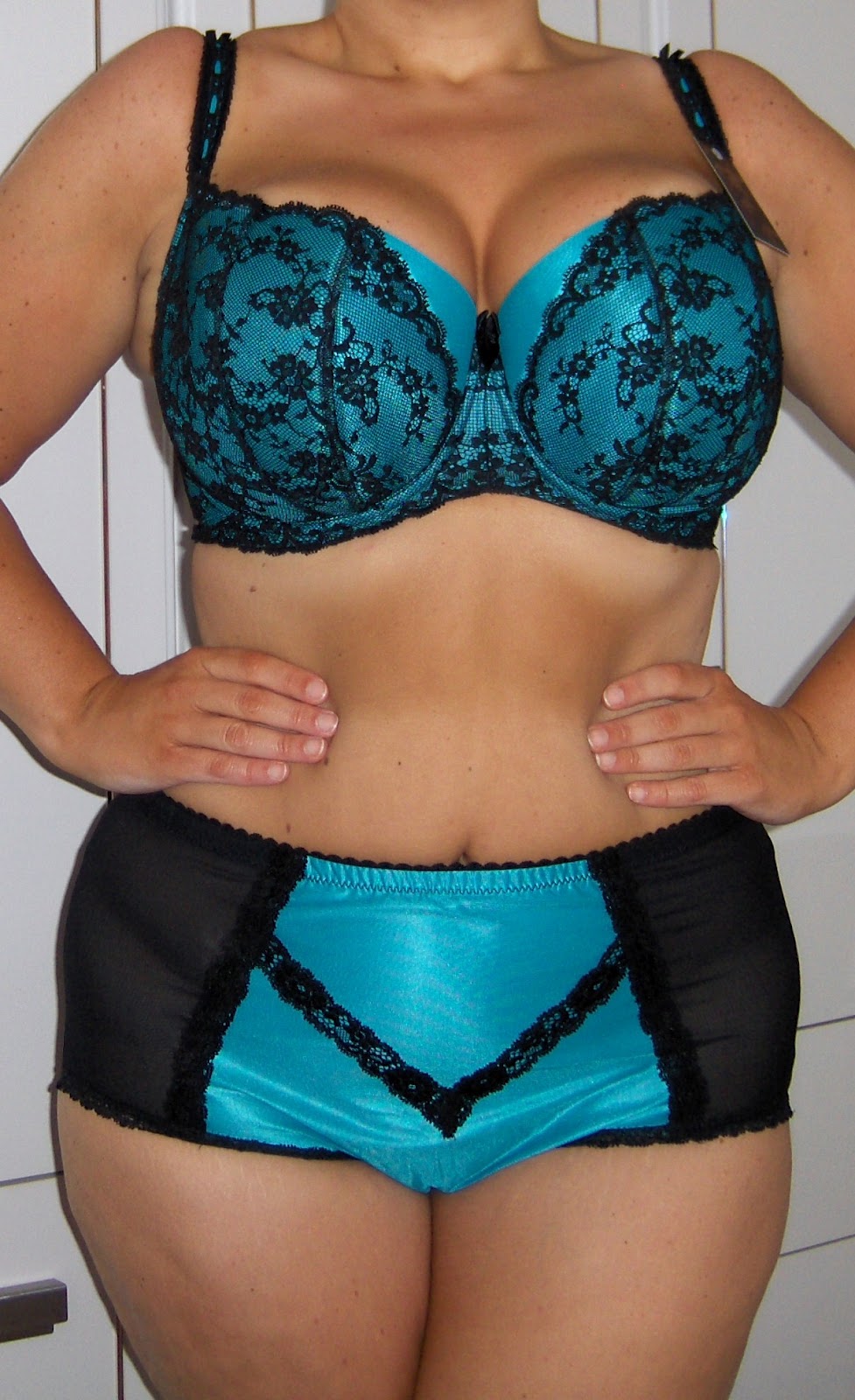 I think these are not a bad match at all, particularly the thong (top photo).  Good news for my bank balance!


The CHP came about because there was demand for a Ewa Michalak bra which gives the forward projection of the CH as well as the push up of the HP.  I think the CHP has achieved this, whilst maintaining the high central gore which means the breasts are well supported.


I love the look of the CHP Koktajl but for me it’s just a bit too small in the cup.  I will keep it however as I am sure it will come in handy for something, and with the ‘matching’ briefs and thong from my Turkus set I really can’t pass this one up!  I love the look of black lace over the top of the turquoise and I hope this is a feature that EM include on more bras in the future, with different colour lace and base colours.  There’s something very sexy indeed about this combination.


So, I’ve now tried three CHPs and I’m pleased to report that I am a fan of this style!  I highly recommend them to you – do let me know if you’ve tried any and how you got on with them by commenting below.