I must admit that I have never in my life felt the need to own a yellow bra. When they started appearing in shops and online a few months ago my mind was not changed and although they were eye-catching I still did not have a great desire to have one in my possession.I was recently sent several bras by Ewa Michalak to try out and lo and behold one of these was their own yellow creation: the CHP Kurczak, which means ‘Chicken’ in Polish.


Shortly before Ewa launched this bra, she asked fans on her Facebook page to come up with some suggestions as to what it should be called.  I suggested ‘Rhubarb and Custard’, in honour of the much-loved yellow and pink boiled sweet sold in the UK.  Obviously this wasn’t the winning name but seeing as the bra was made available soon after Easter (and therefore in Spring), it was appropriate to name it ‘Chicken’.

The CHP style is a combination of the best points of two other styles – the CH and the HP. Put simply, the intention of this bra is to push your boobs against your chest but also to project them forwards.  Sounds good to me!

The CHs, HPs, and CHPs are available in limited sizes because these styles do not work for larger, heavier breasts.  However I do like to have a change from my beloved PLs sometimes and so I squeeze myself into EMs a couple of cup sizes smaller – naughty me.  But the effect can be amazing – here I am in a 32/70J: 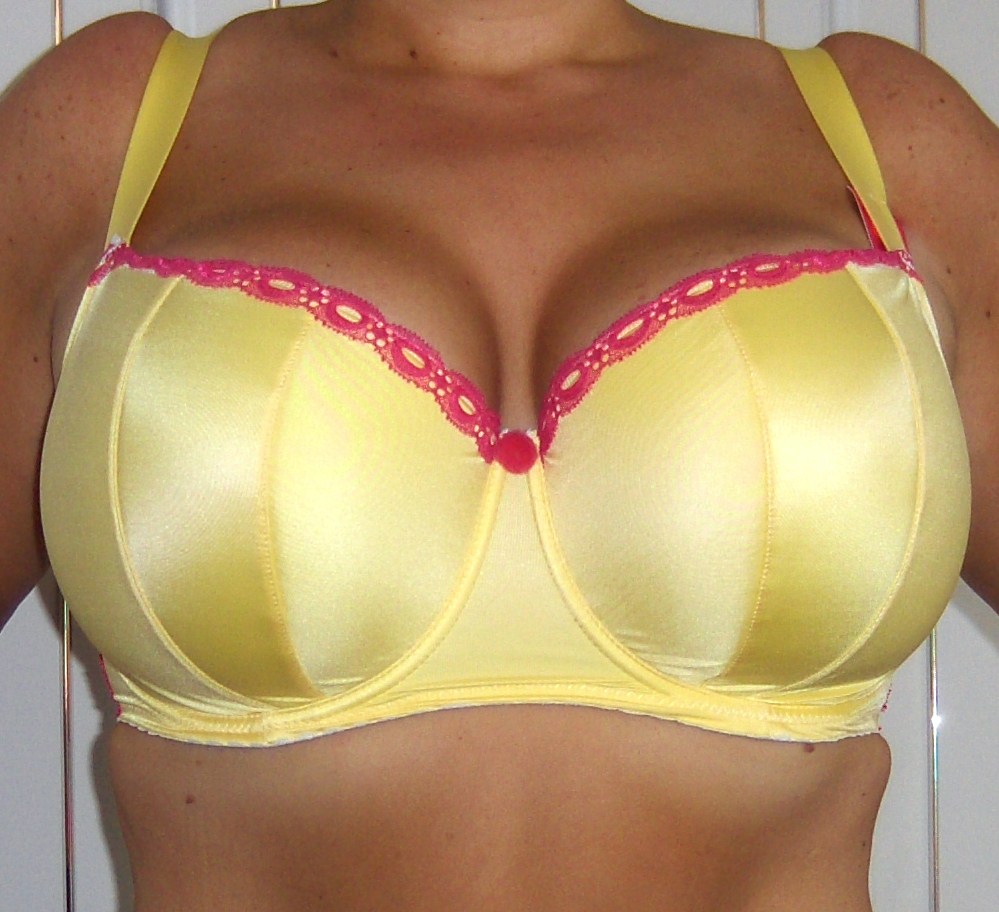 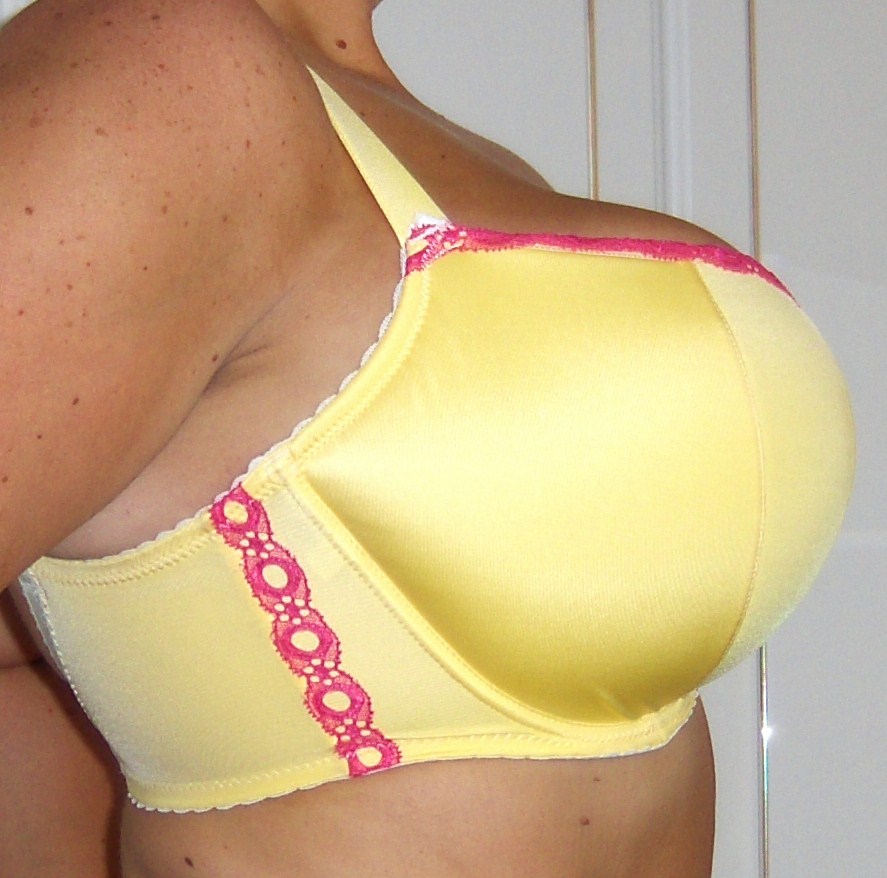 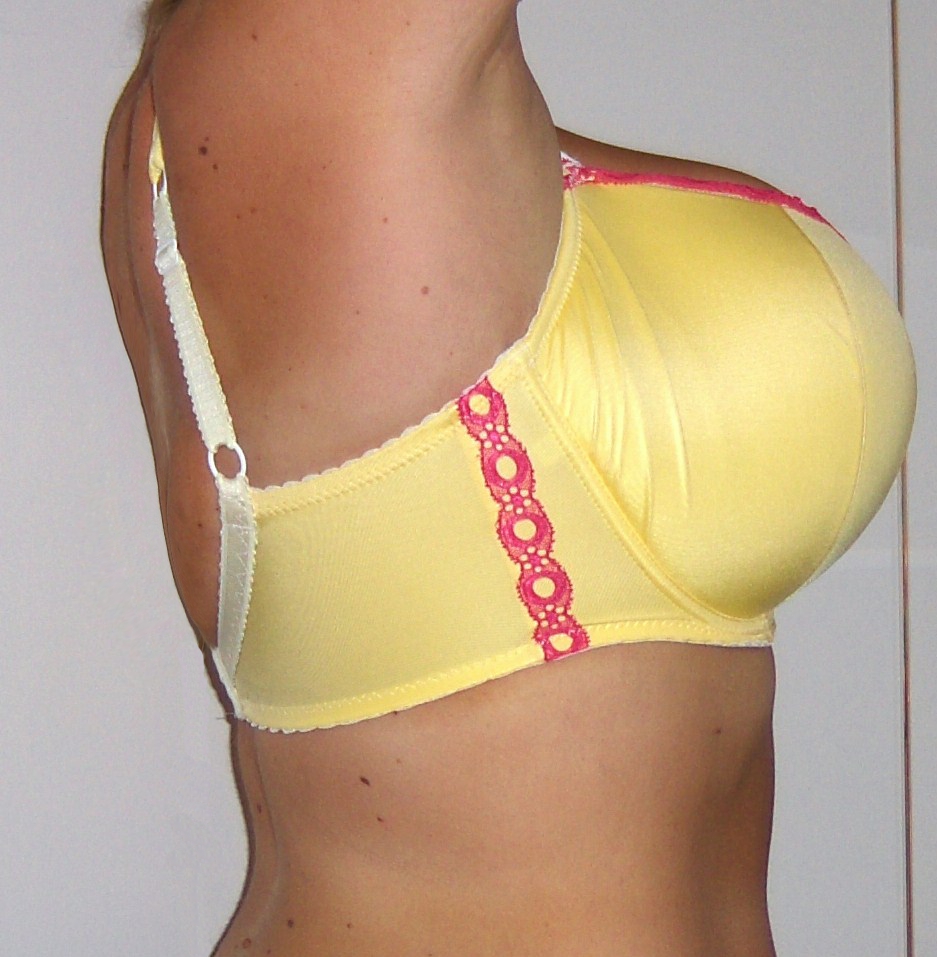 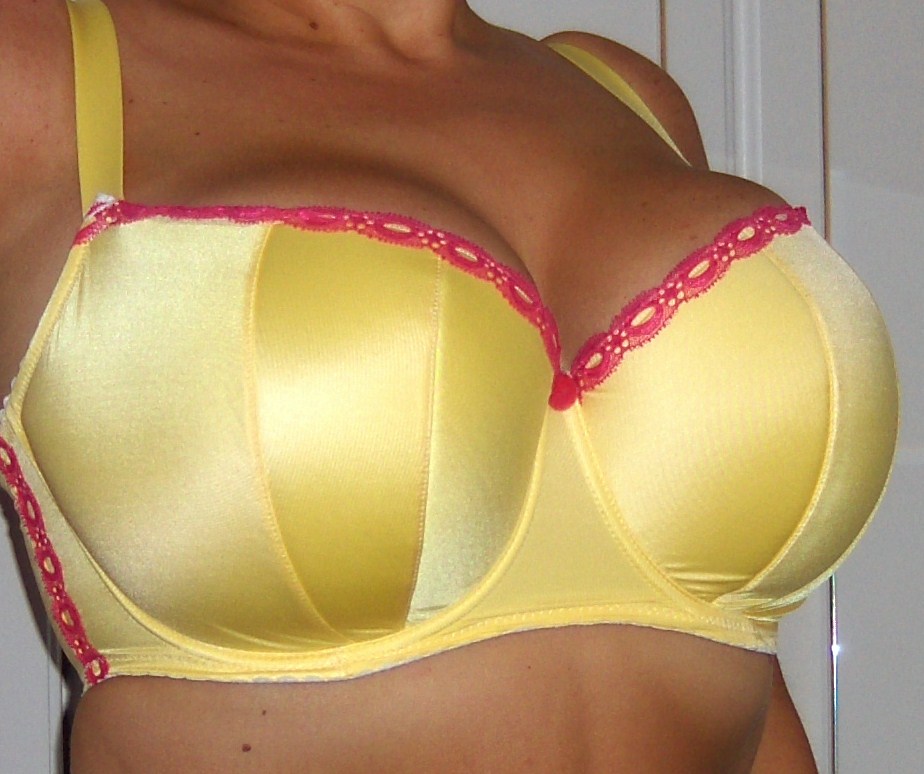 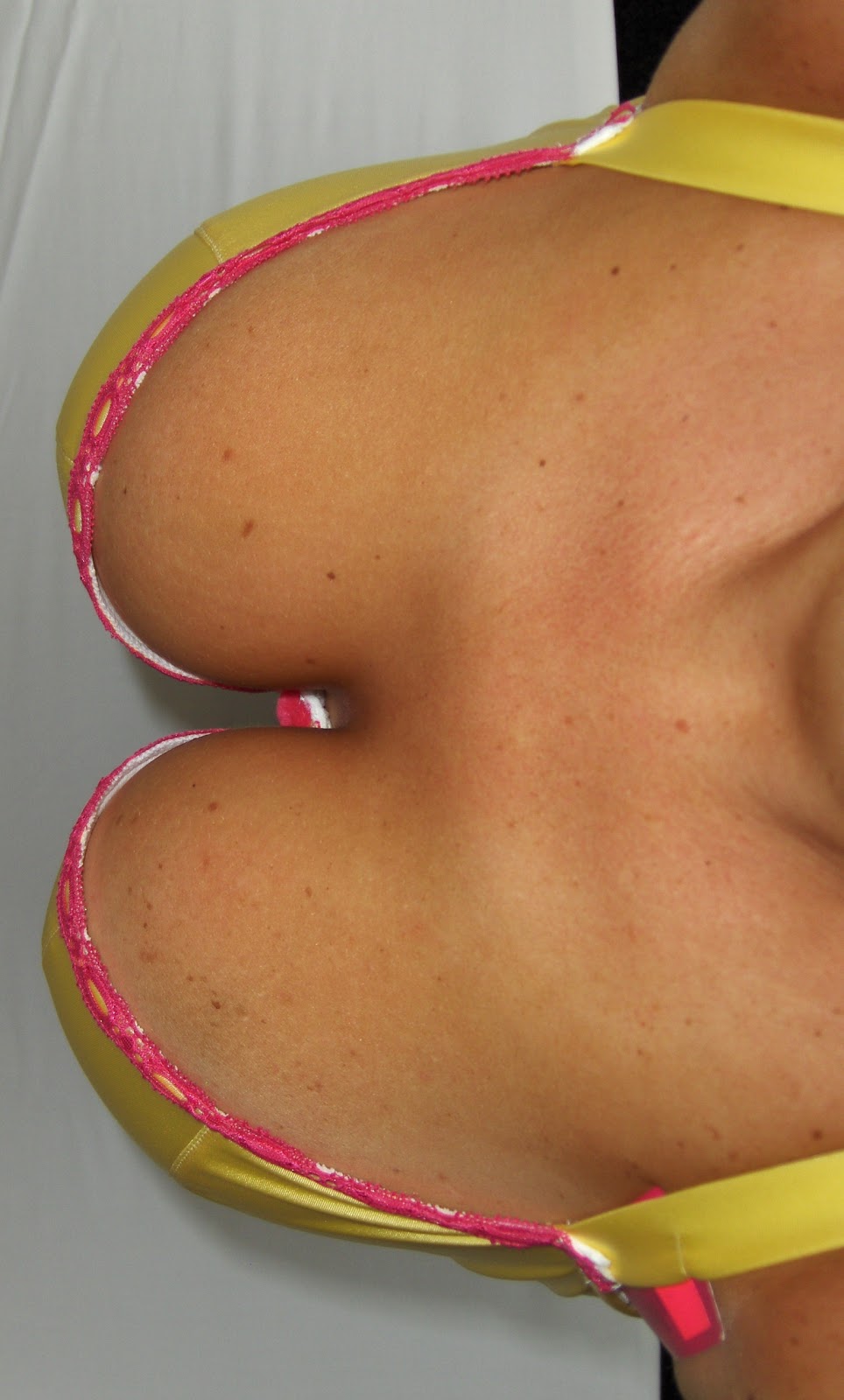 The yellow colour of this bra is actually far more bright and vibrant in real life than these pictures show.  It’s a gorgeous yellow – beautifully golden in hue – and is offset by the contrasting raspberry lace along the tops of the cups and under the arms.  Amazing!  I really love this colour, which has really surprised me, given my distinctly uninterested stance beforehand.

The lightly padded cups are covered in a satin-like microfibre fabric, which has a slight sheen to it, and the insides are lined with cotton for comfort.  A nice, thoughtful touch.  As you can see from the pics, this 32/70J is actually not a bad fit on me at all but if I could I think I would have liked to go one cup size bigger.  Sadly this (and its sister sizes) is the largest the CHP goes to because Ewa feels that this style will not work in larger cups so I will have to make do.

I love the cute pompom on the central gore – such a fun idea!  It gives the bra a cheeky, youthful feel, which is quite a contrast to the majority of my other EMs, which are either pretty, practical or downright sexy.

The band is fairly stretchy and generous and I would have comfortably fitted into a 30/65JJ as I put this on the tightest hooks immediately.  It fastens with three rows of only two hooks, which is something I am not accustomed to at all but found surprisingly comfortable and supportive when I wore this bra for an extended period of time. 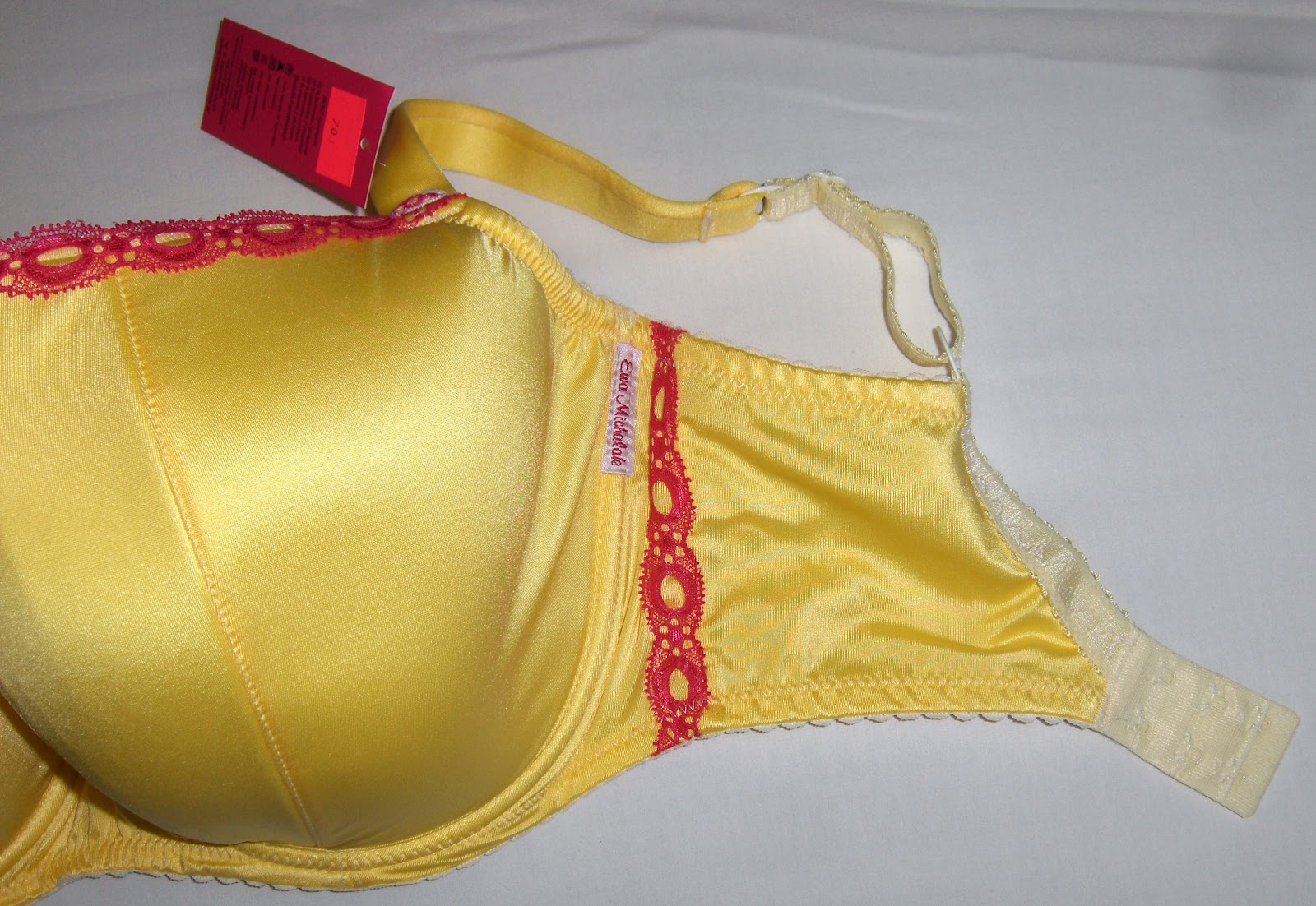 Unfortunately I have my common gripe with the straps.  They are only halfway adjustable and the front half of the straps is elastic covered in material, with the back half being regular adjustable straps.  The front half will stretch out quickly, if my other bras with straps like this are anything to go by.  The back half of the straps is made from a strong material which has embellished edges, meaning that they don’t slip at all.  This is very important seeing that you will be relying on the straps for additional support, besides that which is offered by the band.  I need to shorten the straps permanently and hopefully this shouldn’t be too tricky a task.


I am delighted to say that the straps are connected to the band with plastic rings, rather than metal ovals.  This makes them very comfortable and I am pleased to report that they don’t dig in at all.


The lace edging along the tops of the cups tends to curl over as it is only sewn along one edge.  I think this is also be a pretty easy fix but it’s a pity this wasn’t addressed during manufacturing and testing.


Interestingly, this bra fitted much better at first than the CHP Groski i Róże, but over time they have ended up looking and feeling very similar.


Having become accustomed to wearing CH bras which have removable padding, this one and the CHP Groski i Róże feel a little more flimsy in comparison.  The bras with removable padding seem to have better overall construction, regardless of whether you choose to wear the pads or not.

The CHP seems to be a good blend of the CH and HP styles.  My preference would still be the CH but there will definitely be times when this style will come in handy.  The CHP has a higher central gore and the wires come up higher under my arms than the PLs, but not uncomfortably so.  My breasts certainly feel more secure in CHPs and CHs but I do not get the superb cleavage offered by my PLs.

So now I have three Ewa Michalak style of bra that work for me – I wonder if there will be more in the future…?


Check out The Undergamer’s review of the CHP Kurczak here.