Summer is slowly but surely heading our way here in the UK (honestly!!) and even though it’s been a slow hiccuping start with only a handful of warm, sunny days and rather more cloudy/windy/rainy ones I have every confidence that we’ll have some hot days suitable for sunbathing coming soon.


And, of course, for sunbathing we need a bikini!  I’ve reviewed quite a few of them here on my blog but these reviews were mainly last year so I am delighted to bring you my first bikini review of 2013: the Curvy Kate Horizon Red Stripe Bikini.

Curvy Kate have really outdone themselves with their swimwear range this year.  It’s vibrant, varied and gorgeously designed.  If you’ve read my 2012 Curvy Kate swimwear reviews then you’ll know I had some issues with the fit so when I heard they’d completely redesigned and recut their swimwear (as I found they had with the Curvy Kate Portia I tried recently) I was itching to give it a try.


The lovely Curvy Kate team sent me the Horizon Red Stripe Bikini Top in 32JJ and Fold Over Briefs in 16. 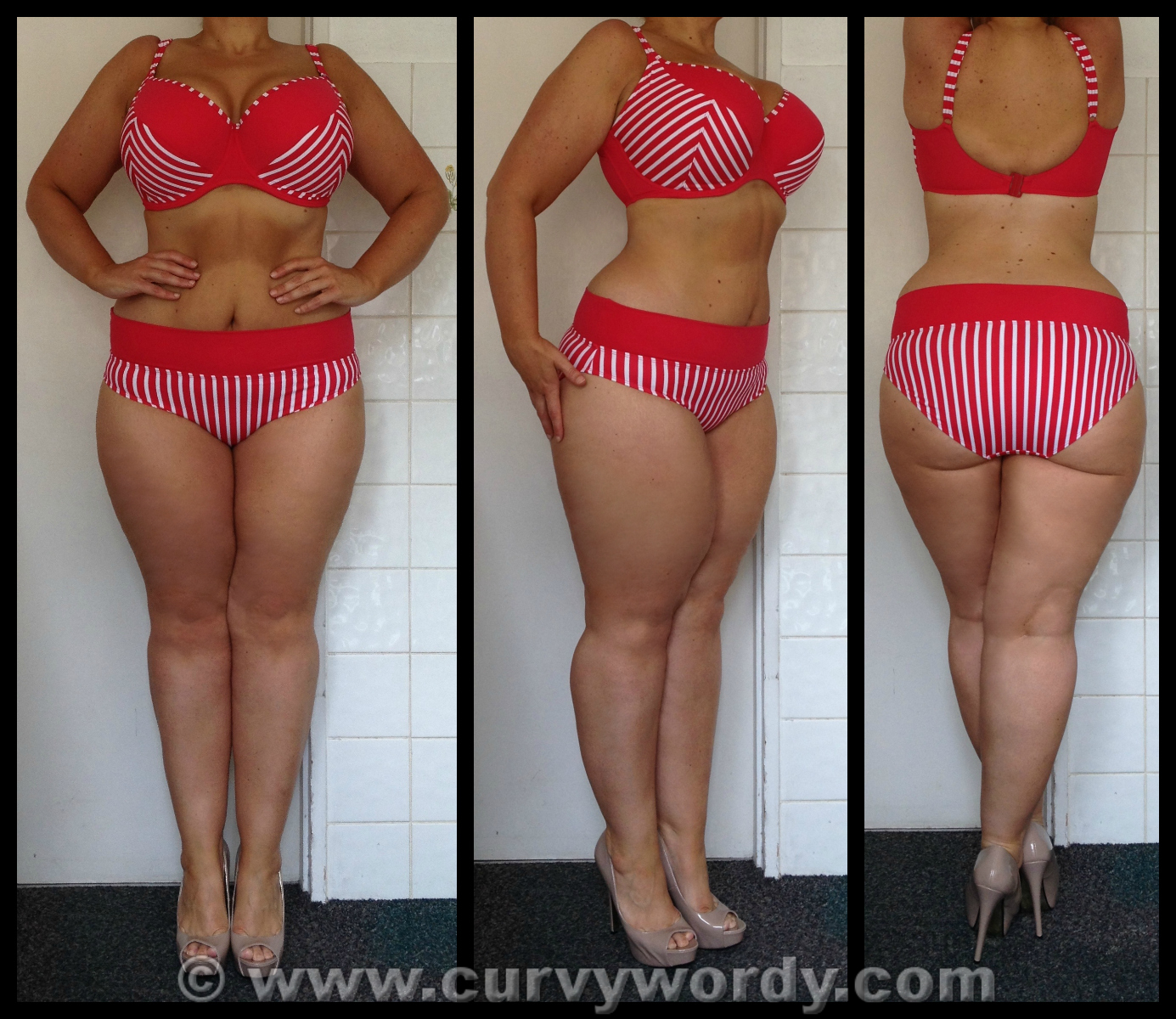 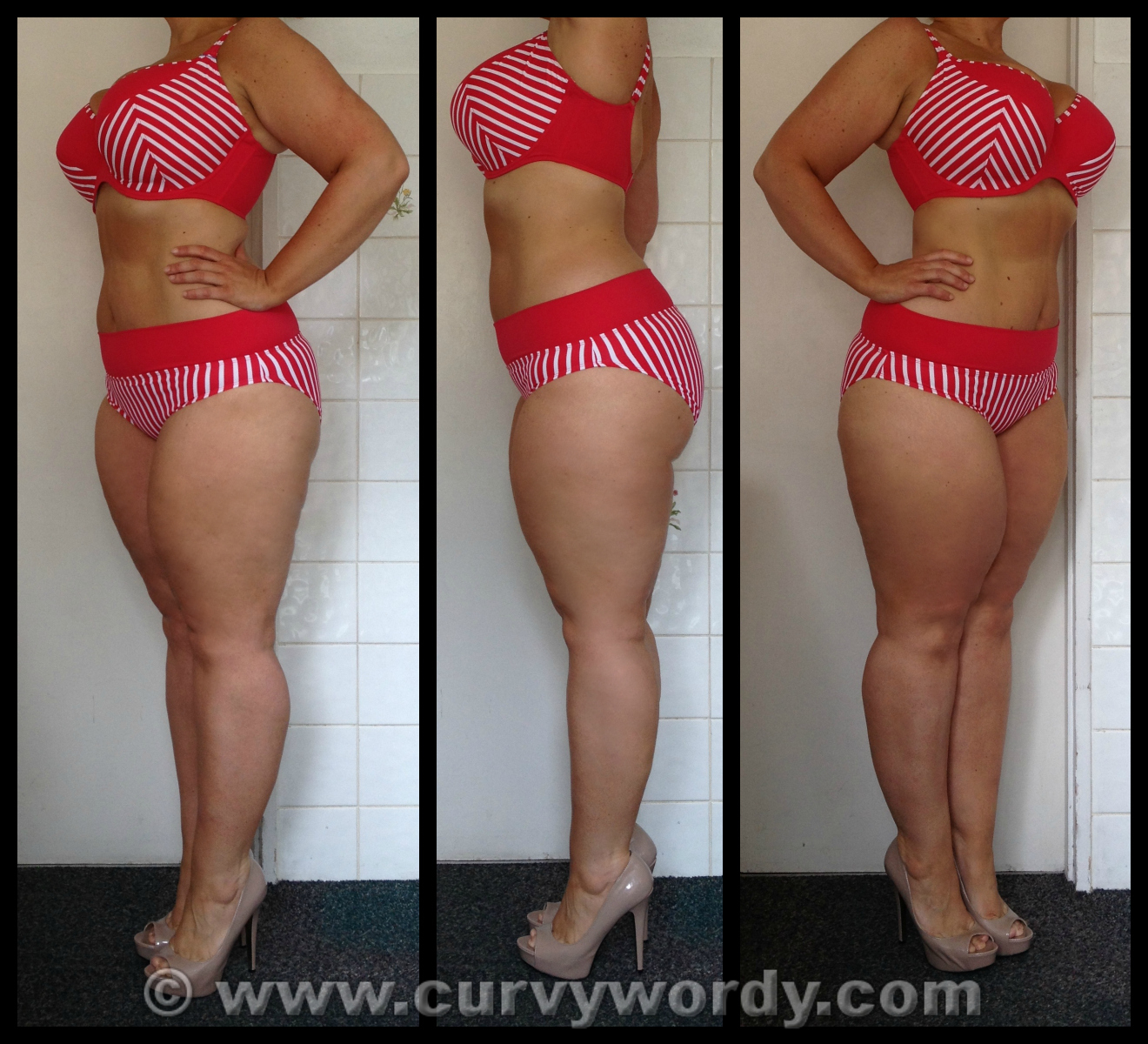 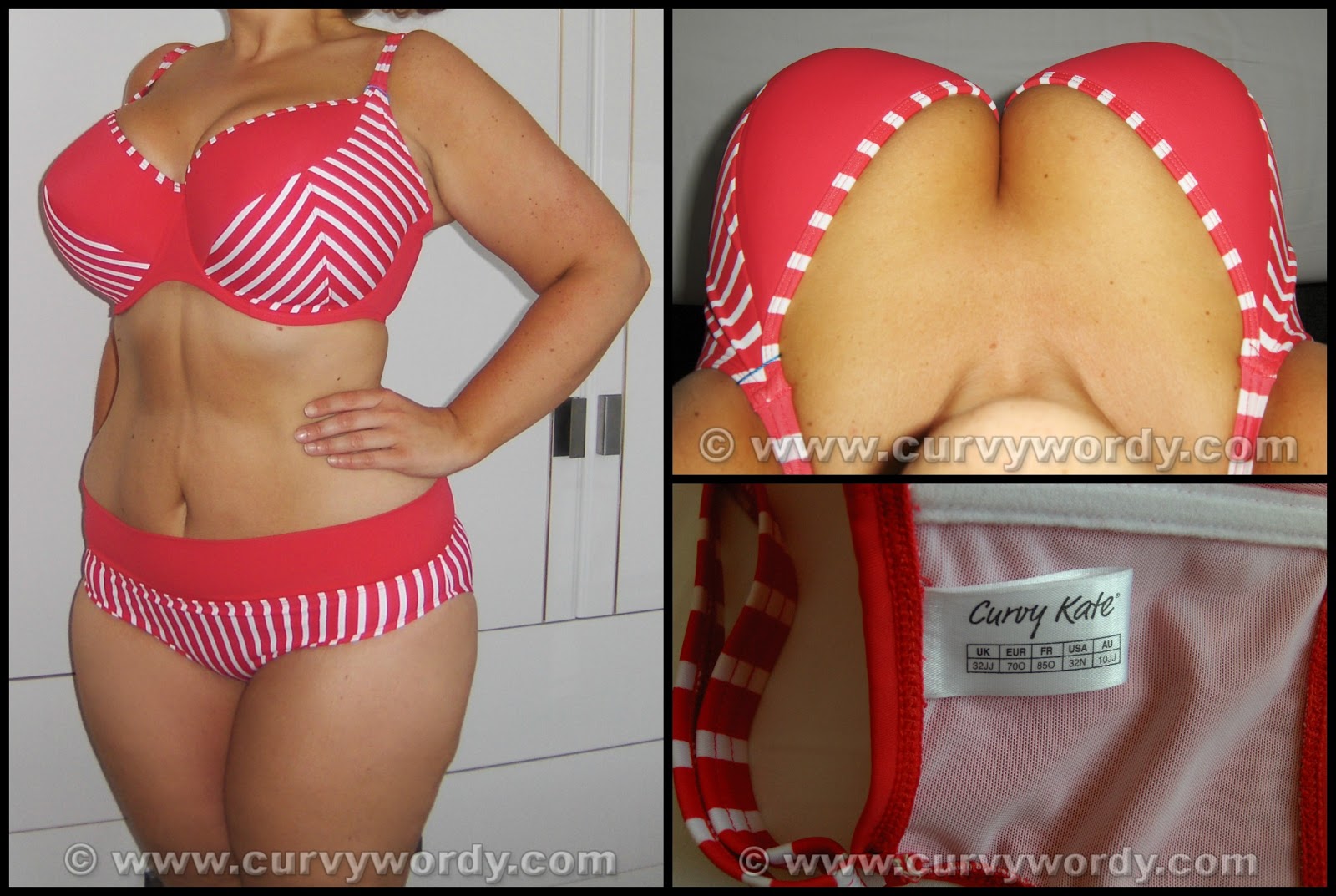 I went for a 32JJ in the bikini top as I find tops often run a little large in swimwear and/or stretch with wear so I don’t mind them being a bit small for me to start with.  I also like to get a good tan and if my boobs are too covered then I might get visible tan lines, which is something I would not be at all happy with!


I’d heard the fit in the 2013 padded bikini tops was similar to that of the redesigned Curvy Kate Daily Boost bra.  Having only tried the 2012 Daily Boost I was a little hesitant as I’d had some shape issues when I tried it but I cleared the memory from my mind and tried the Horizon Red Stripe Bikini without prejudice.


I was absolutely amazed with how different the fit was compared to the sets I’d tried in 2012.  I found the 32K Curvy Kate Rio Ruffle Bikini Top had incredibly wide wires and it came up uncomfortably high under the arms on me.  Yes, the 32JJ Horizon Red Stripe Bikini Top is a whole cup size smaller but it is SO incredibly different in terms of fit.  The wires were a good width for me, being only very slightly too wide, and their height was perfectly comfortable.


The central gore on the Horizon Red Stripe Bikini is higher than that of the 2012 bikinis I tried, but not so high that it poked or caused me pain.  Yes, the bikini top is less plunge-y than that of the previous collection but I felt much more secure in it and had to do far less adjusting when wearing it.


The gore laid flat on my sternum but I did find that the underwires were quite a bit shorter than the channels they sit in, which meant that the bikini kind of folded over and came away from my body a bit at the underarms and the central gore where the wires began and ended.  This was not a huge issue but it does make me wonder if it would have been better for the channels to be made the same length as the wires and therefore the top would have come up less high under the arms, which would have been even better for me.


The lightly padded cups are soft and comfortable.  They are made with quality materials and the workmanship is good – there was no bad stitching or loose threads that I could see.


The straps are very stretchy and adjust fully, and are thankfully much shorter than the infamous overly long straps of 2012, but I still found them to be too long and had them adjusted fully when putting the bikini top on.  I found the adjusters did not stay put, however, and as I pulled the straps over my shoulders the adjusters slid back and refused to be pulled any tighter because of the ‘slidey’ swimwear material and stretchy straps.  As with the 2012 bikini tops, this issue could be easily solved by stitching the adjusters in place when fully adjusted but it is a shame that this would be necessary.


The 32 band was a good fit on me but as you may be able to see from some of the photos above the band came away from my body a little at the front so I would have liked to try the 30 band to compare fit.  It would also be good to try the 32K for cup sizing reference as again you can see from some of the photos that the cups were a little snug on me, or perhaps slightly the wrong shape for my breasts, but that is only very obvious from the ‘view from above’ shot – which is my view when I wear the bikini top.  The band fastens with a typical bikini fastener, which is naturally in matching red!


I tried the Fold Over Briefs in size 16 but I wish I had asked for an 18.  The fold-over section creates a bit of a dent in my hips where the briefs are a bit too small, so a size up would have minimised this.  I tried folding them down but as I am a fan of high rises rather than low I did not like this look at all!  The coverage over my bottom was good – much better than 2012, which was almost indecent – but again I think a size up would have worked better overall.


The alternative option for matching briefs is tie-side ones, which are not to my taste at all.  In my opinion, the Fold Over Briefs and Tie Side Briefs are fairly similar and the rise is almost identical if you wear the former folded down (as I think you are supposed to) so it would have been great if a completely different brief option had been available, such as a high waist pair.  There are plain red ‘Paradise‘ shorts but again they are not the sort of thing I’d usually wear so are not an option for me.


Overall I am seriously impressed with the Horizon Red Stripe Bikini.  The redesign is brilliant and I am sure many women will be much happier with the cut and fit of the padded bikini tops.  The set looks wonderful on and feels so comfortable and supportive.  I look forward to seeing what beauties Curvy Kate bring us in their swimwear line in 2014!