I have already reviewed the Curvy Kate
Caribbean Curves and Bondi Breeze bikini tops and shorts on here and
my final review of CK’s gorgeous 2012 swimwear is the Rio Ruffle. 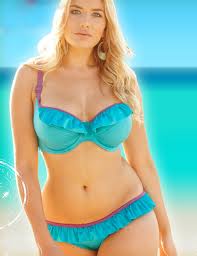 I must admit that I was least hopeful
about this set as it’s in a colour I would not usually go for in
swimwear. Although aqua/turquoise colours suit
me well on the whole I tend to go for bikinis in darker
colours than this.  I really love the look of it – so retro and feminine – but in the past I have shied away from wearing anything so eye-catching when on the beach or by the pool.


I ordered this bikini top in 32K from
Simply Be to start with as I wanted to try it out for size. 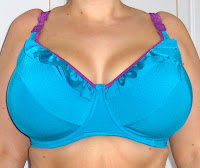 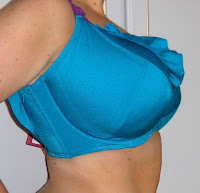 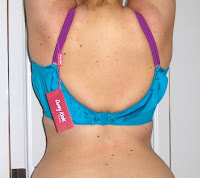 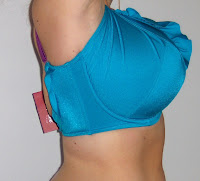 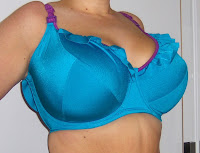 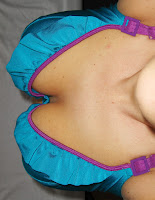 The band was perfect and I was
pleasantly surprised with how well this top fitted me in the cups.
The wires were rather wide for me, however, and came up a bit too high under the arms for my liking.  Furthermore, the cups gave me more
coverage than I would like and gaped a little in places so I didn’t keep this one but it was still
a useful exercise to figure out what size might fit me better
instead. I decided that going down a couple of cup sizes would work
best for me as the material is very stretchy and it would offer a
better shape and more support in a smaller size.


After speaking with the lovely people
at Curvy Kate, who had kindly agreed to send me some swimwear for my
prize in their ‘Name The Bra’ competition, I went for a 32HH (as the
J wasn’t in stock) and a size 20 in the skirted briefs.

Well, shock horror, this bikini ended
up being my favourite of the lot (closely followed by the Caribbean
Curves). I love how the frilled edges give a very feminine feel to
this bikini and there are also frills on the back of the top and
briefs which is a nice touch.

The deep pink complements the turquoise
material perfectly and each colour makes the other appear more
vibrant. The cups are lightly padded, which is great for getting
into a cold pool or sea! The turquoise looks so pretty in the
sunshine and made me feel like I was suitably attired for sunbathing.


The cups are lightly padded with a thin layer of foam –
hopefully this is a sign of more padded bras to come from Curvy Kate, I certainly hope so! I felt well supported and although there was a bit of
east/west shape going on it was minimised by the pretty frills along
the edges of the cups. The wires again were a bit too wide for me
and the cups too shallow but as I had sized down to reduce this it
wasn’t anywhere near as significant as the 32K cups.


I absolutely adore the plunge style of
this bikini. It’s lower in the central gore than the Bondi Breeze
and Caribbean Curves on me, which is great as I wear plunge bras on a
daily basis so it doesn’t do to have tan lines that don’t match!


I found the straps exactly the same as
the other two CK bikinis I tried: much too long! I will be putting
this right by hand now that I have returned from my holiday but its a
bind that I have to make such adjustments and seek out some matching
thread. The straps also did the same thing as the Bondi Breeze,
where the doubled-over straps wouldn’t lie nicely on top of one
another and instead spread, which made for wider tan lines than
expected.


The wires in the cups were a bit too
short so the central gore fabric curled over slightly. This could be
rectified by pushing the wire ends into this section but that meant
the underarm area would sometimes curl out. I find this issue with a
lot of Bravissimo own brand bras but the 2012 swimwear is the first
time I have known of it in CK items.


Interestingly, the band on this bikini
top was significantly tighter than the band on the 32K I tried a
couple of weeks previously. Surely they should be exactly the same?
This one felt very tight and I wonder if it was a mislabelled 30.
Anyway, I soon grew accustomed to it and found it did a great job at
staying put for the day.


Now on to the skirted briefs. I’m
afraid that I felt rather let down by the bottoms of all the CK
bikini sets I tried – they are all very low rise and the Rio Ruffle
is no exception. In fact, I would say they were the skimpiest of the
three and I felt so uncomfortable in them when I tried them on at
home that I went out and bought some plain alternatives from the high
street.


These are size 18 from Debenhams‘ own
label:

They were a great match fabric- and
colour-wise but I really didn’t like the gold embellishment and the way
it made one side of the briefs less deep than the other. I
contemplated removing it and either replacing it or restitching the
side section but in the end I ran out of time before my holiday and
these were returned for a refund.

These were a better shape generally and
the lack of fussy detail was good. This sort of shape is usually what I go for when choosing bikini briefs.  Unfortunately, however, the top
section is supposed to be ruched and I think it has been stitched
incorrectly and so instead it sits as a rounded band, which didn’t
look right. Additionally, the fabric does not have a sheen, unlike
the fabric used in the Curvy Kate set and I was concerned that this
might be noticeable when worn alongside the bikini top. The colour was also not quite the right match, although this was less noticeable in real life.  For these
reasons I decided not to keep these either.


So in the end I took the skirted briefs
on holiday with me and tried to get used to how skimpy they were.
The frills on the briefs actually were quite flattering as they
covered over what can sometimes be a tricky area if the briefs dig in
at the sides. However the front and back rises on the briefs are
almost indecently low and I had to keep checking to ensure I wasn’t
showing anything I shouldn’t have been! Again, I would politely
request that Curvy Kate address this issue when designing next
summer’s swimwear ranges and in addition offer us an option of
regular briefs without tie sides.


As I found with the other Curvy Kate swimwear bottoms, I think a size 16 would have been better for me as these ended up feeling very loose by the end of my holiday. However I would be very nervous that two sizes smaller would mean me showing various bodily parts that aren’t meant to be on display at a public pool or beach!


In conclusion, this is a really lovely
bikini set and if you can make the briefs work for you then you are
definitely on to a winner. Well done, Curvy Kate!