I got ever so excited a few months ago when I heard that
Curvy Kate would soon have a padded bra available all the way up to a
K cup – this is the stuff that my dreams are made of!

It’s funny – before I discovered Ewa Michalak bras around a year ago I had no idea there were padded
options available for larger cups. Now I am finding that UK
companies are expanding their ranges to include more padded options
and I must admit I am a complete convert. I find padded bras give me
great shape, uplift and support and it’s nice not to have to think
about one’s appearance on colder days, if you know what I mean! That
said, I do long for a couple of unpadded lacy options for my lingerie
drawer so I do give these a try whenever I find them in my size but I
have yet to find one that works as well as my Ewa Michalaks.


Anyway, back to padded bras.

The Daily Boost has been available for
a while now and when the lovely people at Curvy Kate were sending me
the three bikinis I’d won in their competition, they were kind enough
to throw in a 34K Daily Boost to road test as well. 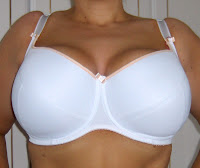 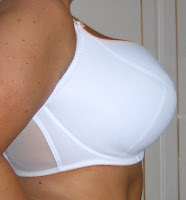 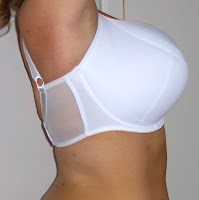 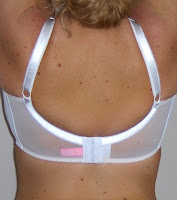 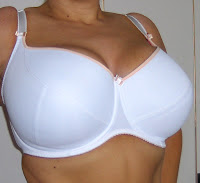 Having never tried the Daily Boost
before, I had no idea what size I would need. I’ve tried lots of
Curvy Kate styles in the past but not yet found one that worked for
me because I needed a larger cup than the Ks available. I therefore
hoped that the 34K (equivalent to 32KK and 30L in the cups) might be
a winner, albeit rather large in the band.


I was so excited to try this one. When
it arrived I was really impressed with the quality of materials as it
felt very soft to the touch and well made. The bra is mainly white
but there is some beige piping which makes a nice feature and breaks
up the plainness of the white fabric.


As I suspected, the 34 band proved far
too big for me. Even with the bra on the tightest hooks it was still
too loose, which is a real pity.  I could have done with a 32 and possibly even a 30.


The cups fitted better around the
central gore section but interestingly the bra felt like it came up
too high in the upper section of the cups for me and there was some
gaping at the top. It was almost as if the cups were too tall for my
boobs, if that makes sense. 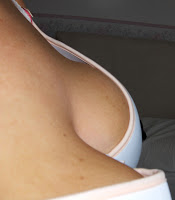 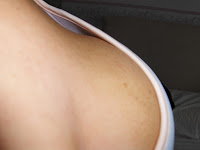 I hope these two pics will show this issue.  Of course I appreciate it doesn’t help that the wires were too wide for me and the band too big so the fault is perhaps not so much with the bra itself but with it not being available in the right size for me…

The straps are fully adjustable and I
was able to get them to a good length for me. I don’t think they
will readjust themselves, as some bras have a tendency to do.


As with all the Curvy Kate bras I have
tried so far, the wires were too wide for my up front breasts and I
was left with empty spaces at the sides of the cups. The cups also
gave me rather an odd shape because the apex of the cups was not
where I needed it to be and the cups were too shallow.


I was so disappointed that this bra did
not work for me. However, I think it is a really great padded option
and the fact it comes in nude as well as white means that it’s one which can
be worn as an everyday bra and will fit with most outfits perfectly. If you’re a fan of Curvy Kate bras then I would recommend this one as an alternative to your unpadded lingerie.

I do hope Curvy Kate will continue to expand their padded and unpadded options and
that one day in the future I will find one that suits me as I love the superb quality of their lingerie.