A little while ago I won three Curvy Kate sets because I was the winner of their ‘Name The Bra’
competition for their ‘Smoothie’ bra. Initially, I tried the three
Showgirl sets (Tempt Me, Thrill Me and Tease Me), all of which were
gorgeous undies but sadly all the bras were far too small for me in
the cup.


Curvy Kate very kindly let me try some
swimwear this time around and I was able to test drive the items on
my recent holiday to Spain.


Now, if you regularly read my blog, you
will be familiar with my struggle to find a CK bra that fits me in
the cup. It appears that a 32KK or even L would be the best size but
even if they made these sizes – they go up to a K cup, amazing! –
I think the wires would be way too wide as the cups are unfortunately
not deep enough for my boobs in smaller sizes. Despite this, I was
keeping everything crossed that the bikinis would work for me.


A while back I talked about bikinis and
how I find I can often size down because the material is far more
stretchy than that of regular bras. I even just about managed to
cram myself into a 32H Freya bikini recently!


The first set I wore on holiday was the
Caribbean Curves bikini top and matching shorts. 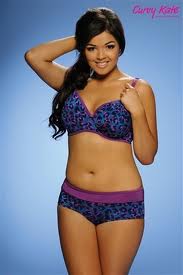 
I absolutely adore the way animal print has been incorporated into this bikini and the rich pink, blue and navy colours are just beautiful. It’s such a clever combination that would surely be flattering on any skintone.


Having never tried
CK swimwear before I was unsure as to what size to go for but after a
conversation with the lovely staff at head office it was agreed that
I would road test the 32J bikini top and size 18 shorts.

As you can see, it worked out pretty
well for me! First impressions were that the bikini top fitted
fairly nicely but the shorts were a little on the skimpy side so when
I packed for my holiday I threw in a pair of plain navy bikini briefs
which I’d had in my drawer for a while. The bikini comprises a
purple, blue and navy pattern so I thought I might be able to get
away with plain briefs in one of these colours if necessary.

As it turned out, I wore the matching
shorts on my holiday after all. I did feel rather exposed at times
as I was not used to wearing anything that low cut but after a couple
of wears I soon got used to exposing more flesh. My main problem
with them is that the rise was so low. It was as if the
manufacturers had used to same rise height for the size 8 as they did
for the size 18 I was wearing, which meant that the shorts came up
way too low at the front and barely covered by bottom at the back.
Cue lots of adjusting whenever I was wearing them! It’s clearly not
a dealbreaker as I wore the shorts a lot but my plea to Curvy Kate is
that they address this issue for next year’s swimwear range. I would
also prefer an option of regular bikini briefs (not tie side ones)
with a higher rise.


Although the shorts fitted well when I first tried them on, I think I would have done better with a size 16 overall.  By the end of my holiday they had become quite loose, and that’s even with me gaining a bit of weight due to eating far too much (that’s what holidays are for, right?!).


So, on to the bikini top. It really is
far more like a bra top than a bikini but it is nicely low cut for
great tan lines and the amount of material on the back section is
kept to a minimum, I guess for the same reason.


What’s interesting is that the top is
padded and currently the only padded CK bra available up to a K cup
is (as far as I am aware) the newly released Daily Boost so I do hope
they plan to bring out more padded offerings in due course. This
bikini gave me a much better shape than any of the unpadded CKs I’ve
previously tried and I didn’t get the dreaded quadraboob to the same
extent at all. Admittedly, I had to readjust myself on occasion but
in the main my boobs stayed put and looked good in this top.


The wires in the cups were a bit too
short so the central gore fabric curled over slightly. As a quick
fix I pushed the wire ends into this section but this meant the
underarm area sometimes curled out. I find this issue with a lot of
Bravissimo own brand bras but the 2012 swimwear is the first time I
have known of it in CK items. I also found that the wires were too
wide and the cups too shallow, but this is a very common bra/bikini
top problem for me and I know there are certain brands that fit me
better in this respect than others. This bikini top would therefore
work particularly well for those who have wider set boobs which are
not as up front as mine.


The back band fastens with a typical
bikini clasp, although it is chunkier than those I’ve had on other
bikinis in the past. Also I think it fastens the opposite way to
those I have previously worn but that might just be my memory playing
tricks on me! Either way, it fastens easily after one has worked out
which way round the clasp should go. The clasp had an annoying habit
of turning on its side because it had not been stitched firmly enough
in place – this could be easily rectified at home with a needle and
thread. The 32 band was good on me but I do wonder if the 30 in this
one might have actually been better.


The straps are fully adjustable but are
WAY too long and there is a feature plastic clip on the straps at the
front which impedes adjustment of perhaps another centimetre. The
straps kept readjusting themselves and even though I wore them at
their shortest I still found them to be too long. Had I had more
time ahead of my holiday I would have unstitched them and made them
shorter but I didn’t and had to make do.


The top came up a little high under my
arms but not enough to be a bother and the boning did not trouble me
at all. This is a very comfortable bikini top!


Overall, I liked this set very much but
if the minor issues could be ironed out I believe I would have a
bikini that I really loved. Several people on holiday
commented on how nice it was and I felt very proud to be wearing a
bikini that fitted me as well as a bra and gave me great shape and
support.


And check out Denocte’s superb review on Kurvendisussionen here (if you’d like to read it in English, click the Union Flag at the top of the post).