A little while ago, Curvy Kate ran a competition on their Facebook page to name their new bra.  It’s a smooth moulded bra and will be available (in selected band sizes) up to a J cup.  Up until this point, I knew very little about Curvy Kate and had only once tried on one of their bras a years or so ago and had unfortunately ordered the wrong size so they weren’t a brand particularly on my radar.

However, when I heard about this bra competition I put on my thinking cap.  I knew some of Curvy Kate’s bras were called ‘Tease Me’, ‘Thrill Me’ and so on…so I decided to enter the suggestion of ‘Smooth Me’ into the competition.  I hadn’t realised at the time that the ‘Tease Me’ etc bras were all part of a range called ‘Showgirls’ – bras for ‘special occasions’ that had some extra va-va-voom to make the wearer feel very special and sexy – and therefore my suggestion of ‘Smooth Me’ would perhaps not be appropriate as the new bra was not a Showgirl style.

I didn’t think any more about the competition until a few weeks later when some of my lovely Facebook friends told me I had won!  I went straight to the CK page and there it was in black an white: the announcement that I had won their ‘Name the Bra’ competition.  CK had decided to call the bra ‘Smoothie’ but my suggestion of ‘Smooth Me’ had been their inspiration and so they crowned me as the winner.  It’s so very kind of them – I felt like rather a fraud as the name they went with wasn’t the one I’d submitted but I have since been reassured by the lovely Hannah and she has persuaded me to accept the prize of three sets of CK lingerie 🙂

Not being an owner of any CK sets before this competition, I was at a loss as to what to order.  However, as soon as I saw the Showgirls I knew I had to give them a try.

The first set I tried was the Tease Me Black/Wine. 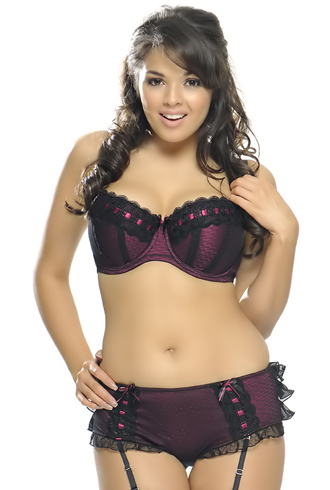 My friends advised me that the Showgirls came up rather big in the band and possibly a little small in the cup.  This presented me with a problem as the largest cup in the 34 back (which seems to be my back size for now at least) was an H cup.  I knew there was no way I would fit my bazookas into this bra but could not resist giving it a whirl anyway. 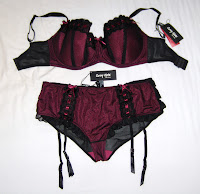 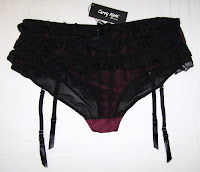 Just WOW.  Fuchsia pink polyamide/elastane fabric is overlaid with black lace mesh and fuchsia ribbon.  There is thicker black lace behind the rows of ribbon along the tops of the cups and down the front of the shorts, which is very flattering, and there are two bows (one black with thicker ribbon underneath one fuchsia pink thinner ribbon) on the central gore and at the point where each of the straps meets the top of the cup.

The straps are plain black but of a decent thickness and I am sure they would not slip or adjust on their own during wear.  They are fully adjustable.

The back band is reasonably stretchy (I have entered the measurements on Bratabase, as with all the bras I try, in order to help others find a good fit for themselves) and fastens with three rows of three hooks and eyes.

There are several options for undies to match with this gorgeous bra and I went for the shorts.  I adored the three rows of frills on the upper area of the backside and on the lower front of the shorts and the fact the whole back section was completely sheer (you may see in the pics I am wearing a thong for hygiene purposes but I have tried to edit it out).  A very naughty, sexy addition to these shorts were the removable suspenders, which made me feel very saucy indeed!

I wished so hard for this set to fit me and although the shorts were fine sadly the cups on the bra were way too small.  I think I would have needed two, if not three, cup sizes larger, and even then I would have wanted the same cup width but more depth and I think it would be unlikely the larger cup sizes would be made that way.

I considered keeping this set for the bedroom only but seeing as I already own several Ewa Michalak sets which are a better fit for me in the cups I felt this would be excessive.  Plus I don’t have anyone in my bedroom at the moment so it ended up being rather a depressing thought!

I am currently in talks with the lovely Hannah at CK to find out what set I should go for instead of the Tease Me so look out for more Curvy Kate reviews in the coming weeks.  Plus I have reviewed the other Showgirls I ordered as part of my prize, Tempt Me Black/Gold and Thrill Me Grape/Jade, elsewhere on my blog.