A little while ago I reviewed the gorgeous Curvy Kate Portia in Seafoam/Pink in 32K.  It was a lovely set and overall fitted me pretty well.


One bra I have been longing to try since it came out less than a year ago is the moulded cup Curvy Kate Smoothie.  I was actually the person to name this bra; Curvy Kate ran a ‘Name The Bra’ competition on their Facebook page and I came up with ‘Smoothe Me’.  Now, that’s not quite ‘Smoothie’ but apparently I inspired the eventual name and was credited with the win.  Yay!

The main stumbling block for me is that the Smoothie does not go up to a K cup, unlike many of the Curvy Kate range.  It is available in sizes 28-30 D-J, 32 D-HH, 34 D-H, 36 D-GG, and 38 D-G.  Whilst this is an impressive range of sizes it is disappointing for those of us with larger breasts who are only too keen to have a moulded cup bra to choose from.


However, I was determined to try it nonetheless and the fabulous folk at Curvy Kate HQ decided to humour me and let me try the Curvy Kate Smoothie in Raspberry. 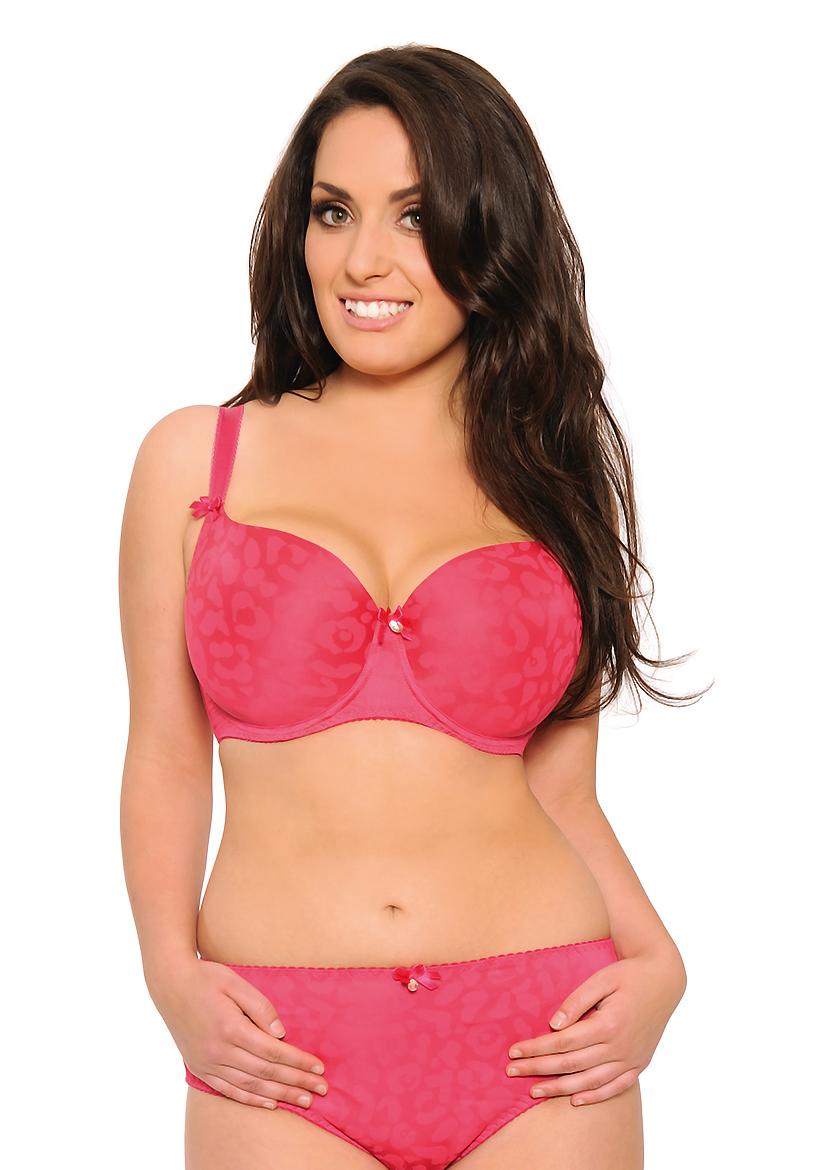 I am sure you can see why I was so very eager to try this one – the colour is beautiful!  So summery and fun, and not to mention feminine and girly.  I tried the Plunge Bra in 30J and the High Rise Brief in 18. 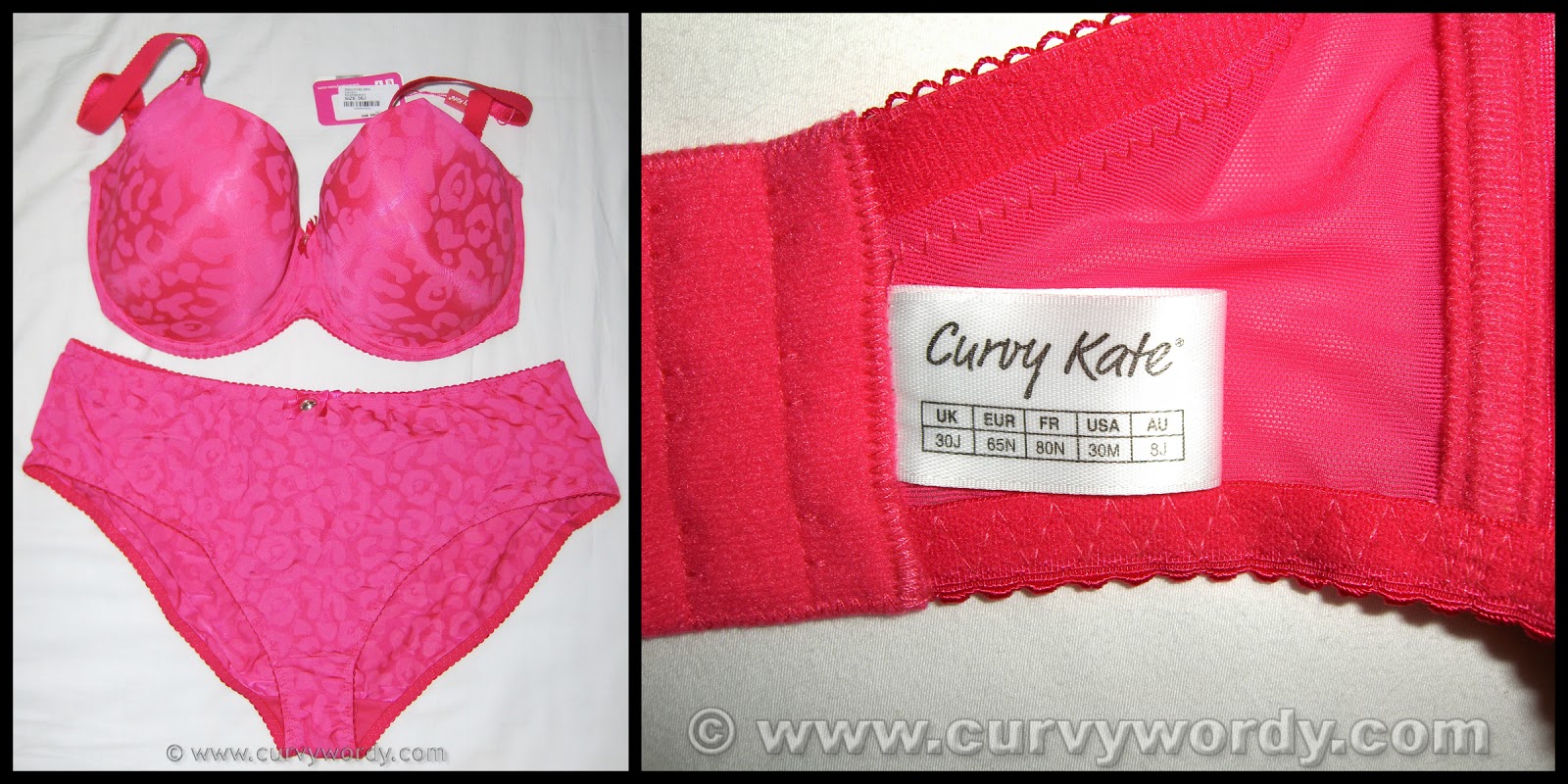 Absolutely lovely, isn’t it?  In reality, the colour is a cross between the photo of the set on the left and the stock photo above.  It’s a really vibrant, rich fuchsia pink and although it won’t be to everyone’s taste I think it’s terrific. 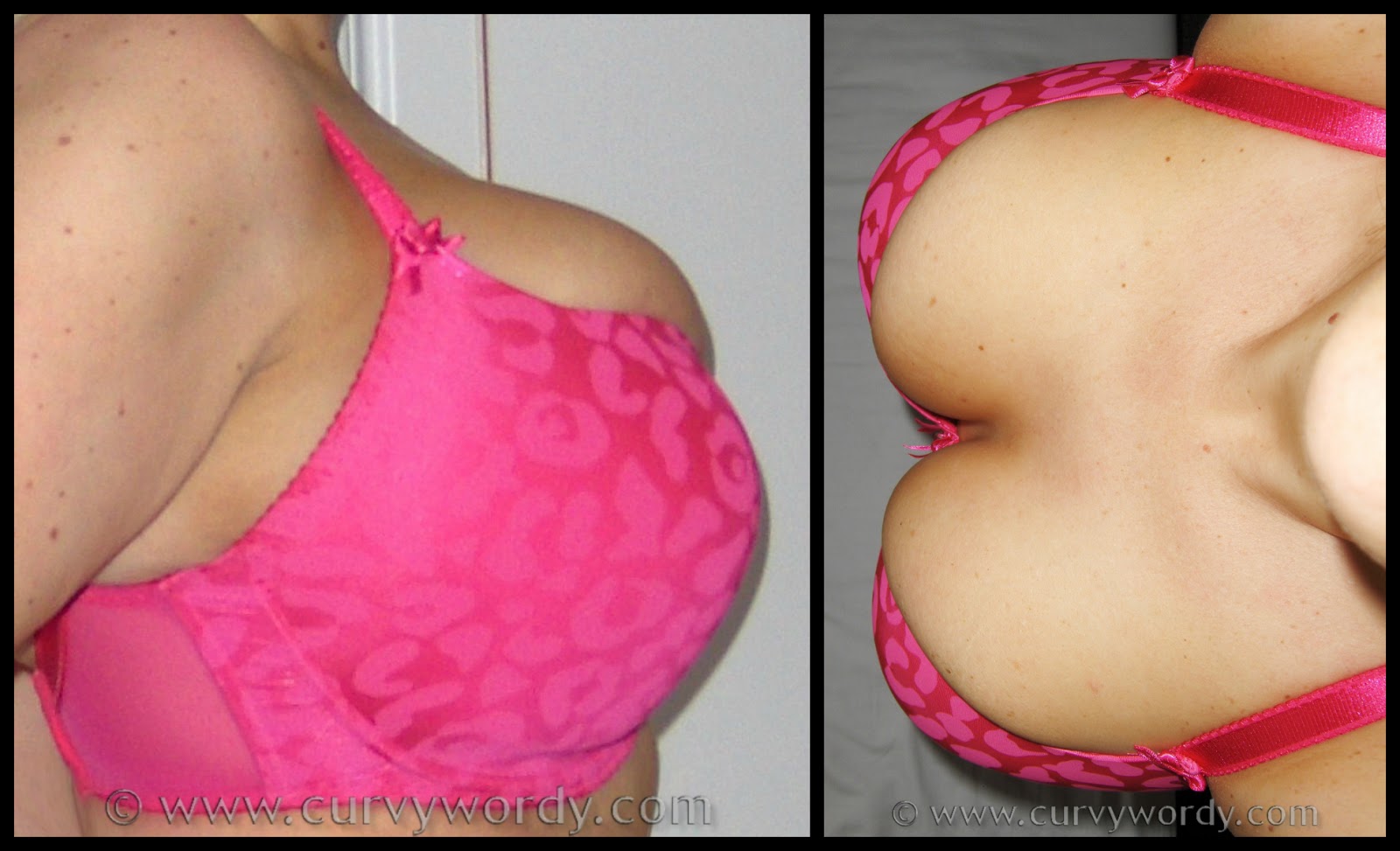 Sadly for me, I couldn’t say the same for the fit.  Just as Curvy Kate had suspected, the bra was way too small in the cups, to the point of causing major quadraboob by almost cutting my breasts in half!  I too had thought this would be the case but sometimes I just want to try a wide selection of lovely lingerie like everyone else.


So, fit aside, what did I make of this set?


Well, the cups are moulded so there are no seams to show up under clothing.  The material is flexible and has a little bit of stretch to it.  The cup outer layer is made of leopard print raspberry fabric that has a slight sheen to it so the print can be more or less noticeable, depending on the light.  So pretty!


The band is fairly stretchy and I found the 30 length to be spot on.  The section of the band that goes around the back is sheer fabric, which adds another sexy touch to this bra.  The band fastens with three rows of three hooks and eyes.


The underwires are a good width and encase my breast tissue at the sides.  The central gore almost tacked to my sternum but of course as the cups were way too small it did not quite reach its intended position.


There is a very cute bow and diamante detail on the central gore, along with bows at the point where the tops of the cups meet the straps.


The straps themselves are quite stretchy and fully adjustable.  I experienced no problem with the adjusters moving on their own, thanks to the embroidery along the edges of the straps that helped the adjusters to stay in place.


As you can see from my photos, the bra has a lovely plunging shape so is perfect (in the correct cup size) for low-cut tops and dresses.  Despite the cups being far too small for me they felt quite supportive and gave me a rounded, uplifted shape.


The High Rise Briefs felt rather like the Portia shorts on me but I can see in the photos that they do look a little different.  I would have liked them to be more high rise, but that’s just personal preference.  The size 18 was great on me and fitted well without cutting in, although I did find them a little roomy in the tummy area.  The coverage over my backside could have been better but this did not affect wear as the briefs felt very comfortable on.


So, despite this bra being several cup sizes too small for me, I am still very impressed with the Smoothie.  Vying for the same market as the Freya Deco, I think the Smoothie does a good job of offering bright colourways and prints, instead of sticking to plain, basic colours.  Let’s face it: the more lingerie choices we have the better so there is definitely room in our lingerie drawers for more than one moulded cup bra!


I love the Smoothie and hope that one day Curvy Kate will bring it out in larger cup sizes (although I completely appreciate why they don’t – I can’t begin to imagine the amount of engineering required to create the 30J, never mind a 30K!).  Have you tried the Curvy Kate Smoothie?  What do you think of it?