A few months ago, Polish lingerie superbrand Ewa Michalak brought out a long-awaited new style of lightly padded bra: the S shape.  When this bra was in the planning stages it was known as ‘BP’, which supposedly stood for ‘balconette padded’.

This shape was designed specifically for ladies with larger breasts, and also for those who have softer breasts, who need a different shaped cup that would offer superior support to the PL shape, which had previously been the only other option for those of us with larger boobs.  This new shape was much anticipated and of course I was keen to try it for myself.
The very first style Ewa Michalak brought out in the S bra was the S Wiśniówka. I was sent two sizes in the S Wiśniówka – 32K/70K and 32KK/70KK.  I have recently been wearing 30L/65L PL bras and this is the size I would have chosen to try but when the S bra first came out Ewa was only selling it in sizes that she’d fit women into herself so that she could be sure of the support and shape each bra provided.  30L/65L was not a size that had been tested so instead I went for the sister sizing option of 32KK/70KK and, as I’d heard that some people needed to take a size down from their PL size to get best fit in the S bra, I also tried the 32K/70K (equivalent in cup size to a 30KK/65KK). 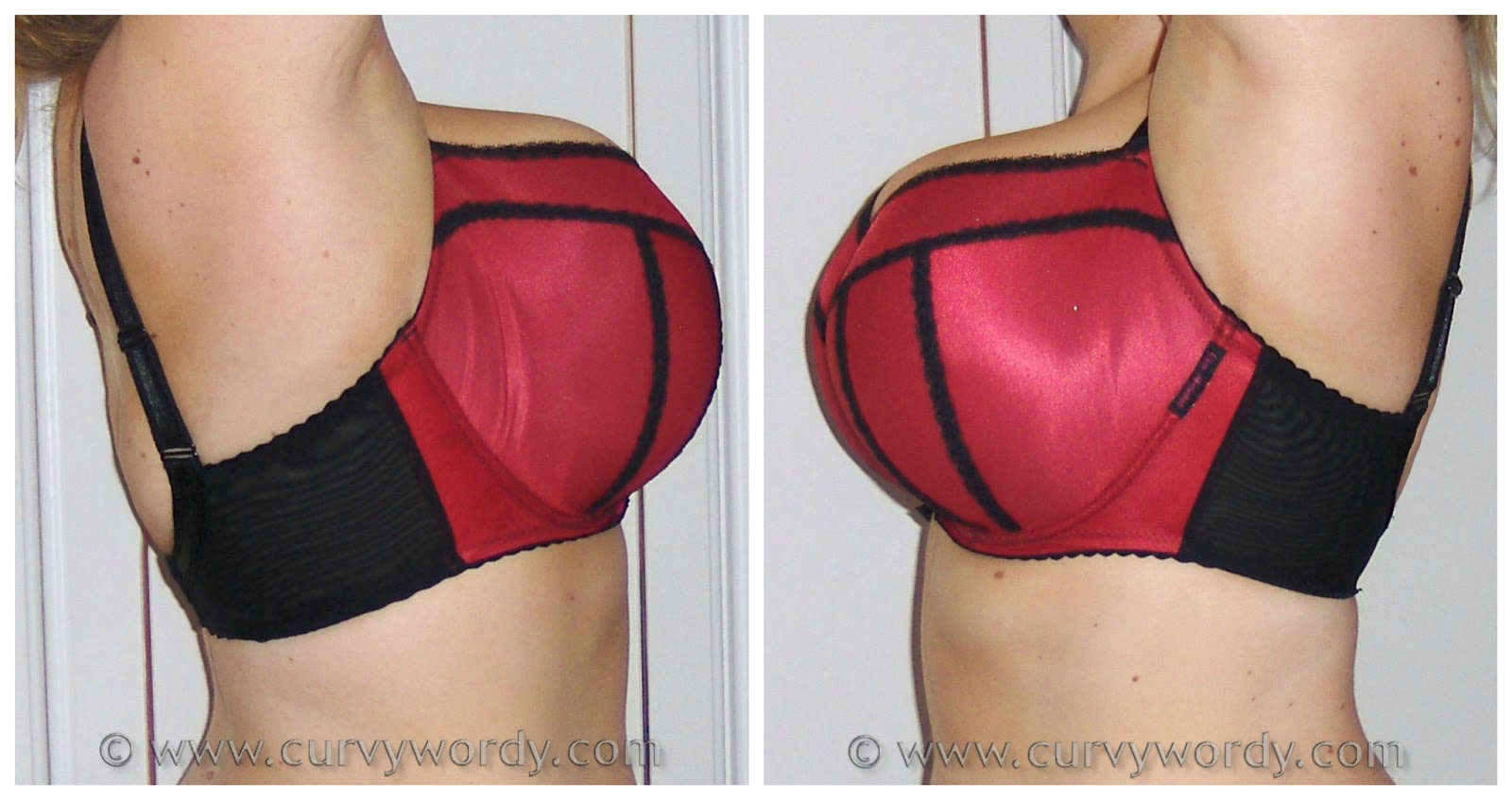 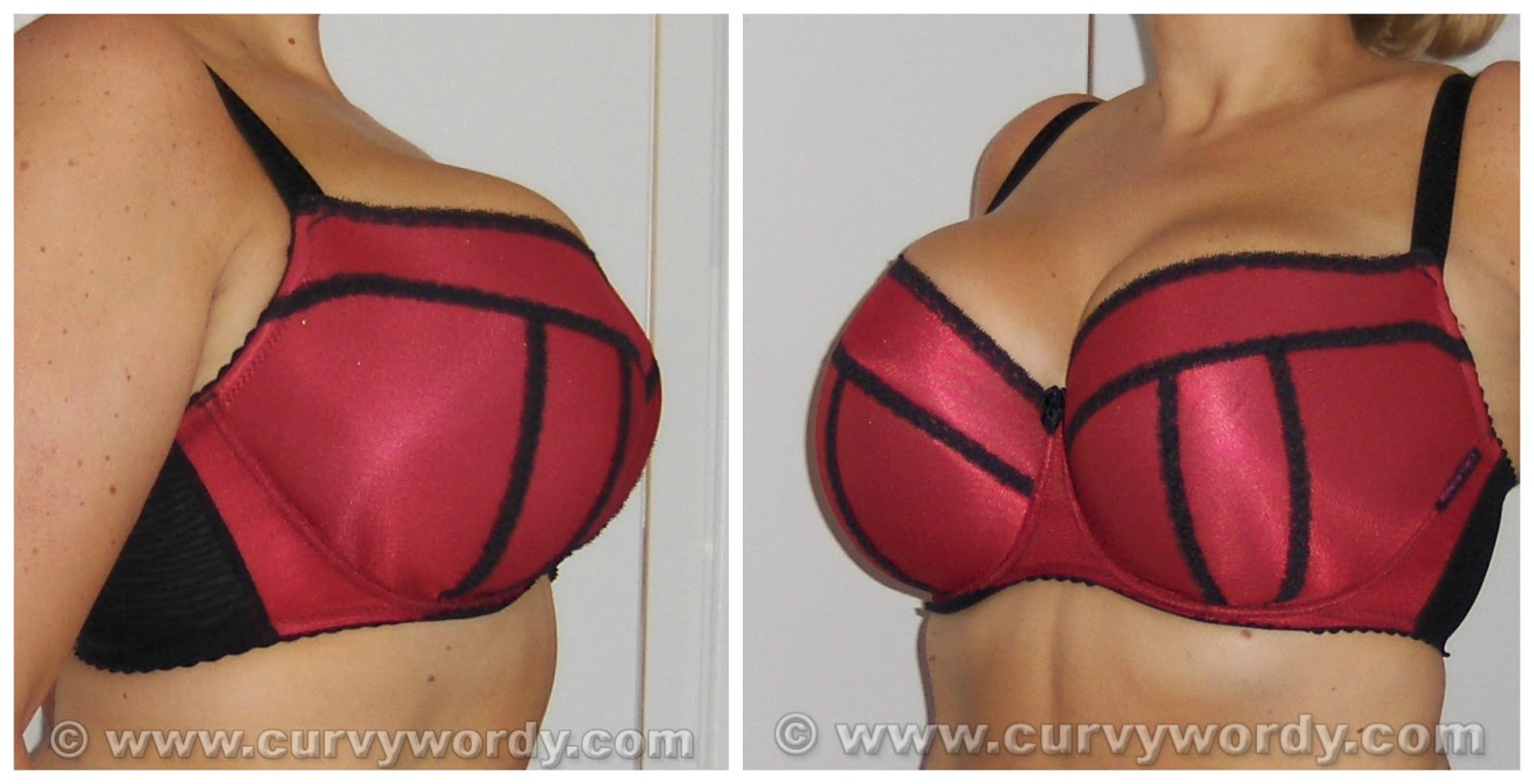 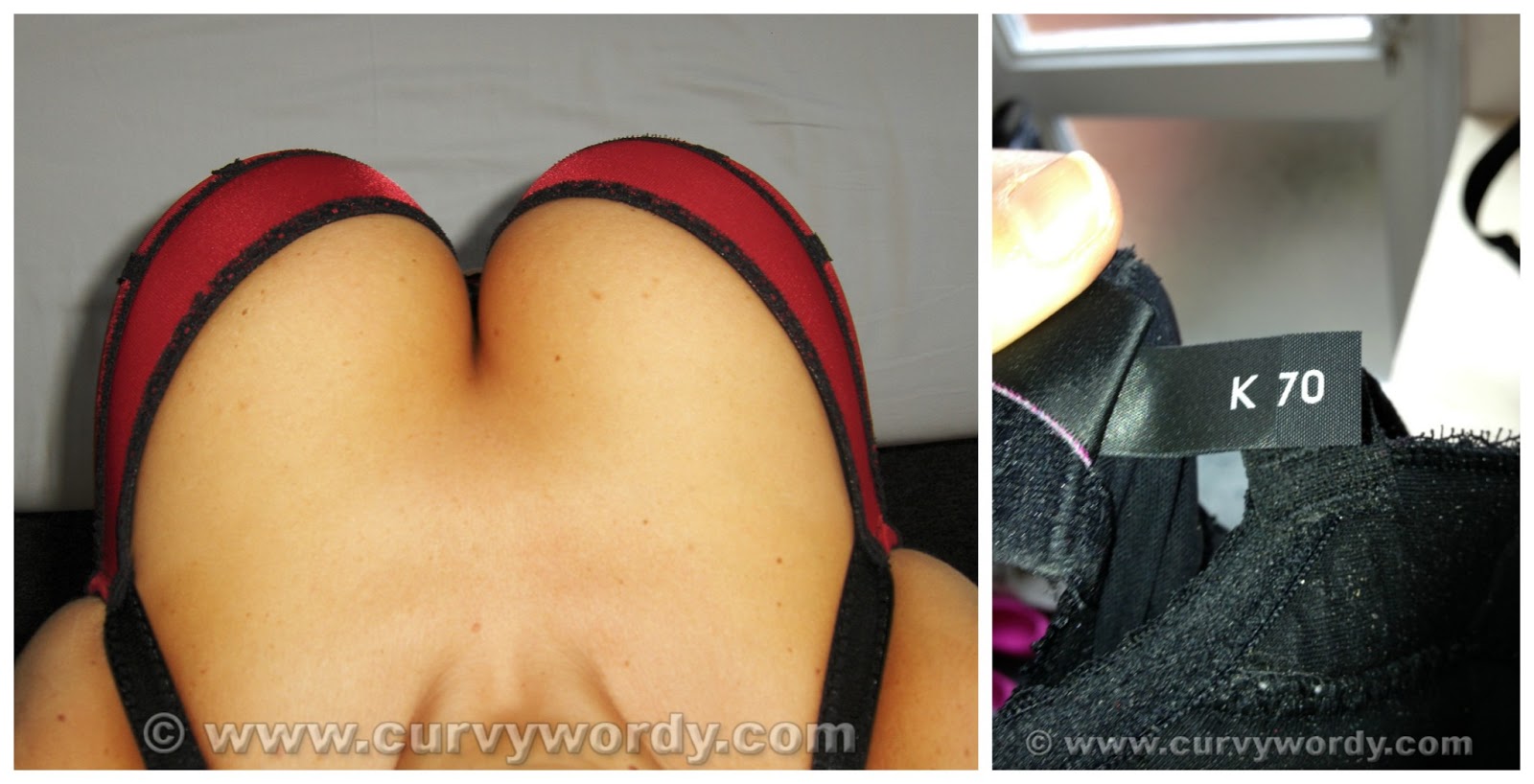 As you can see, despite the fact that the central gore sits flat against my sternum, this bra came up rather small in the cup.  So, how did I get on with the 32KK/70KK? 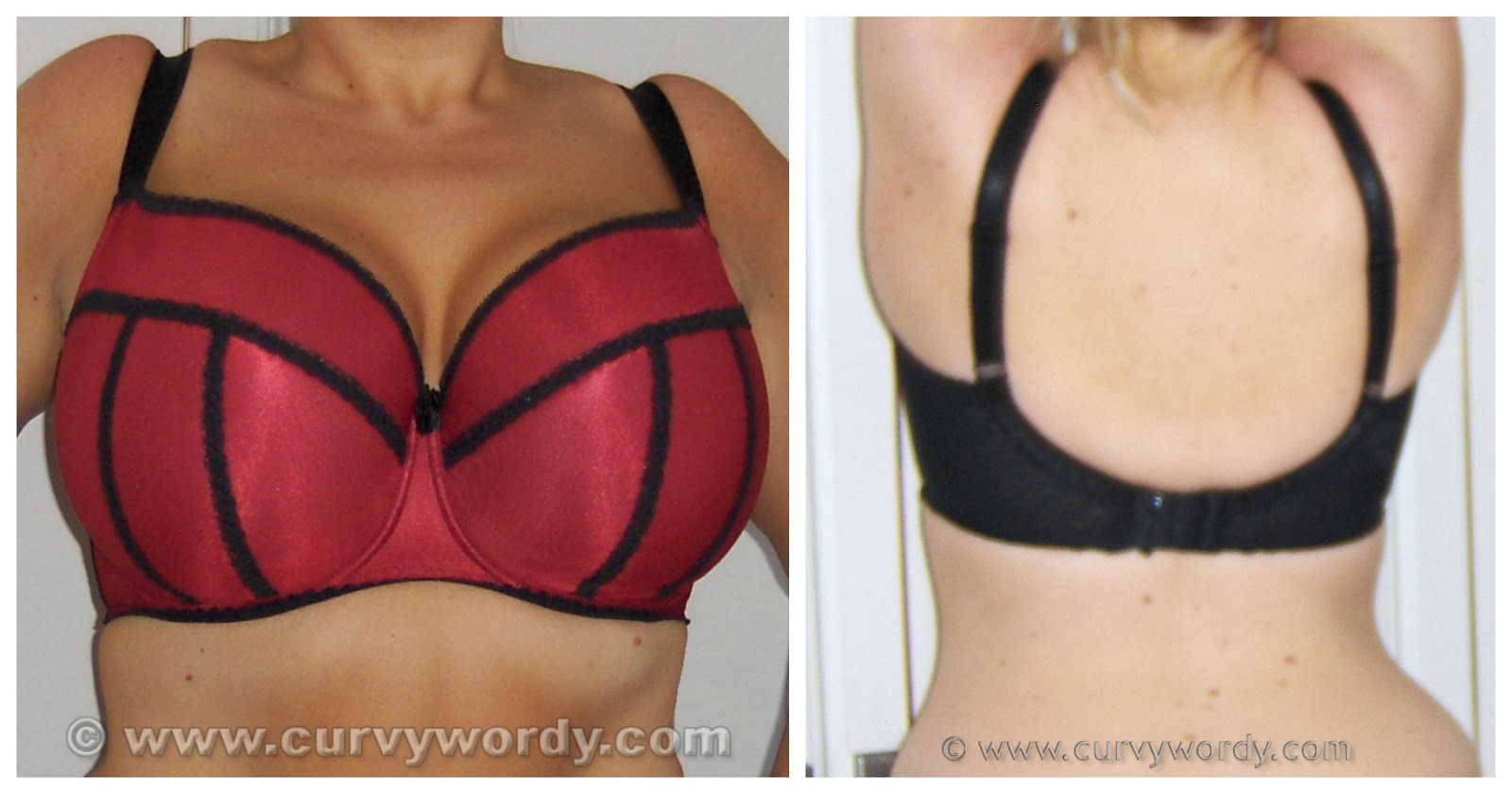 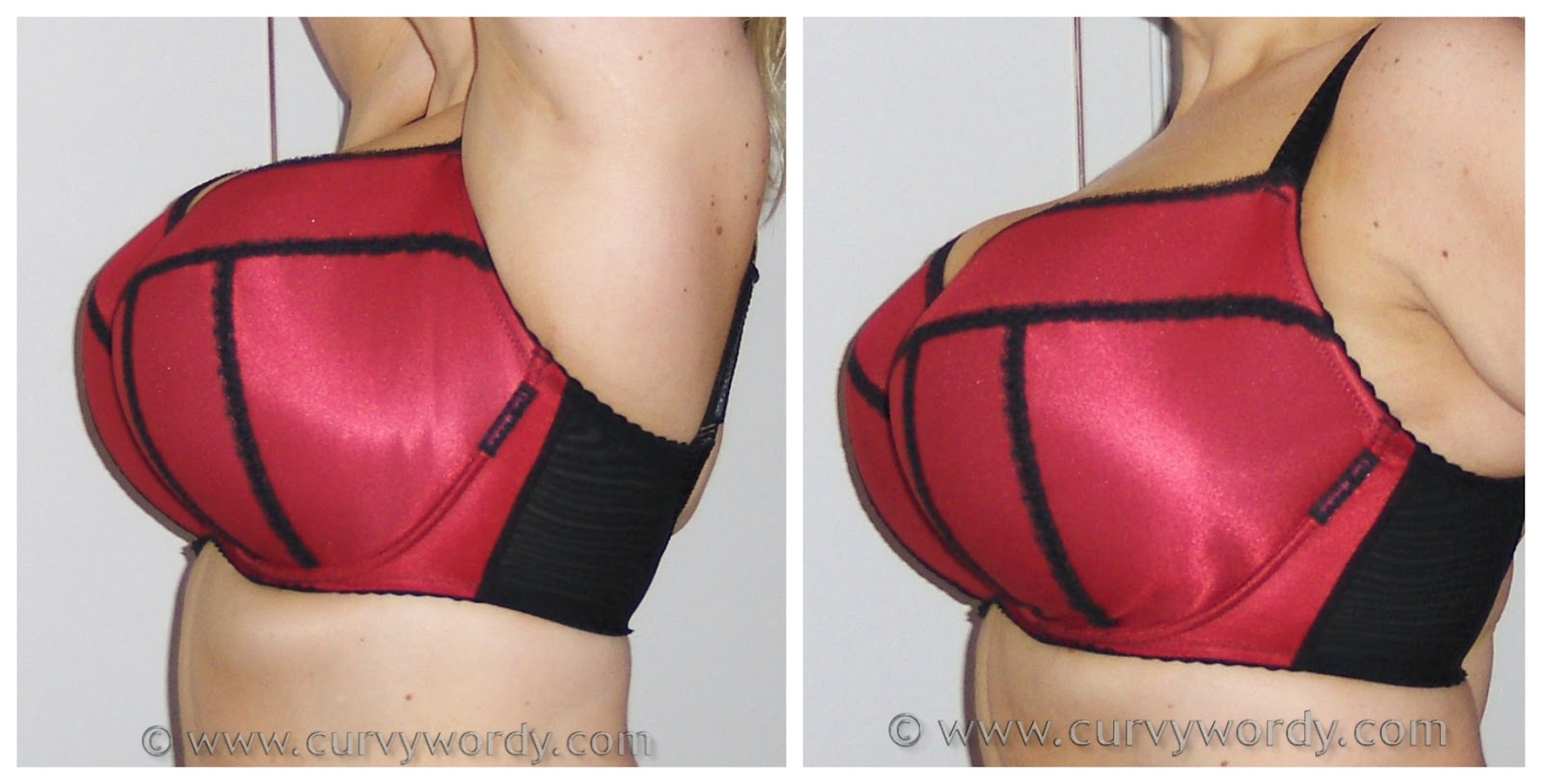 If anything, this one was a bit too large in the cup.  Again, the central gore tacked perfectly to my sternum but it was almost as if there were two cup sizes between the two bras as the fit was so completely different.  I am not sure how well these photos show this so I took some more to clearly demonstrate the problem:

I found the 32KK/70KK cups rather too tall and therefore I was left with gaping at the tops of the cups where they met the straps.  It’s not hugely noticeable when I’m wearing the bra under clothing (see further down in the post for pics to demonstrate this) but I know it’s there and the cups feel less supportive than the 32K/70K.

Interestingly, when I pinch a small amount of the cup to close the gap, the cup fits much better:

So the depth of the cup is fine but its height affects the fit on the upper portion.  I think a simple few stitches in the tops of the cups will help me to solve this issue and make the 32KK/70KK cups fit me much better.

As you can see from my photos, the 32K/70K offers much less boob coverage than the 32KK/70KK.  I decided to put the bras together to demonstrate the extreme differences between them:

(Don’t forget that you can click on any of the photos on my blog to get larger images.)

When placed together like this, it is clear to see that although the bras have central gores of the same height, the larger cupped bra has cups that are taller by over an inch at the strap point.  This is quite some difference and goes some way to explaining the gaping issue.

So what about the bras themselves?  Well, the S Wiśniówka is a gorgeous deep fuchsia pink shade, almost identical in fact to the PL Fuksja I used to own.  In fact, it’s so similar that I can wear my high waist briefs with the S Wiśniówka and they look like they were made to match.  Great news!

The S Wiśniówka’s lightly padded foam cups have similar depth to my PL bras but they offer more coverage and are in fact much more like a full cup bra.  However, even with the taller-cupped 32KK/70KK, the S Wiśniówka is far less full coverage than any true full cup bra I have tried, but it still gives great shape and support.  Ewa Michalak wins again!  The cups have much more horizontal curve to them than my PL bras, meaning that the breast is contained and the chance of spillage is significantly reduced.

The wires on the S Wiśniówka come up higher under my arms than my PL bras and I do find that when I wear the 32KK/70KK I get a bit sore from where the underarm section meets the straps.  This does not occur in the smaller cupped bra so this is another issue caused by the too-tall cups on the KK, and it’s worth pointing out that the underarm wires in both sizes do not poke me at all.  Width-wise the S Wiśniówka has far narrower cups than my PLs but overall the depth is about the same.  This means that the S style is perfect for those who need bras with narrow wires but deep cups – this one will meet your needs perfectly.

The fully adjustable straps are fairly stretchy but very soft, making them very comfortable to wear.  They have a clever embroidery along the edges that should stop the adjusters from moving during wear and so far I have found them to stay firmly in place.

The 32/70 band was a little too big for me and I have already found that it stretches with wear so a 30/65 would be better.  The band fastens with four rows of three hooks and eyes so there’s plenty of option to adjust as necessary.

I have read other reviews that say the S style cups give them a pointy shape but I have not found this at all.  As you can see from my photos above, the shape is great: rounded and projected, which perfectly suits my ‘up front’ boobs.  However, I have noticed that the shape changes depending on how the bra fits and the 32KK/70KK gives a very slightly pointer look than the too small 32K/70K and I wonder if this is related to breast shape, as well as size.

Many of Ewa Michalak’s more recent PL bras have removable pads in the bottom of the cups to help correct the appearance of asymmetry.  It’s worth noting that the S bras do not have this and Ewa is careful to make a point of mentioning this in the item description.

In previous lingerie reviews readers have asked me to show how the bra looks under clothing, so here is the S Wiśniówka under a simple vest from Primark.

The quadraboob I get from the too-small cup is pretty noticeable and my boobs look rather squashed.  Not the best look! 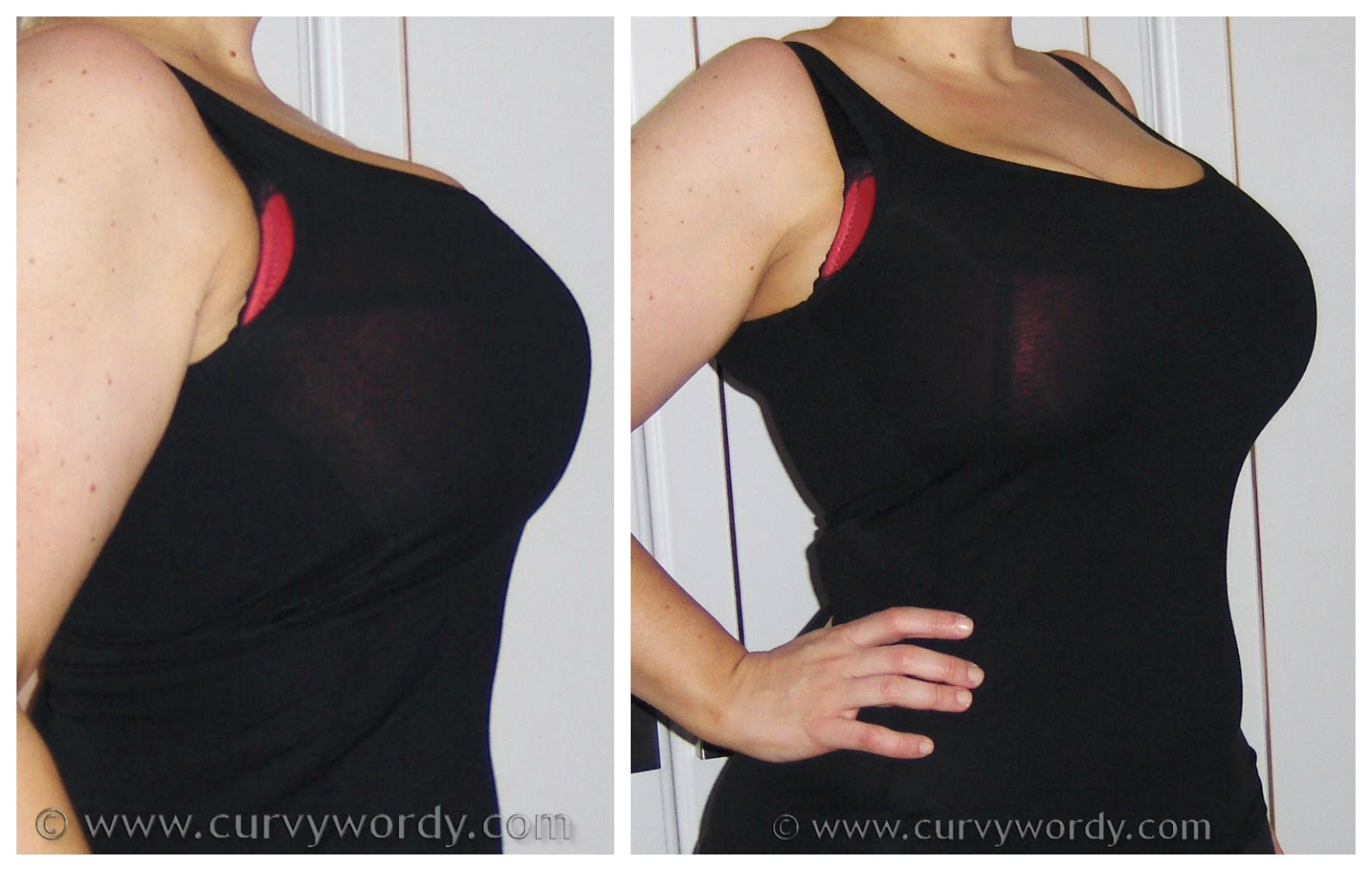 This is a much better fit and the gaping I experience with the taller cups is not visible at all.  In the third picture it almost looks as though the cup is a little small but it must have been how I was standing at the time or the tight vest pushing on my breast tissue as I am certain that the cup is not too small.

You can clearly see the difference between how high I have to wear the vest in the second batch of pictures compared to how low I can wear it with the smaller cupped bra thanks to its shorter cups.  I still get a reasonable cleavage with both bras but it would still be my beloved PL bras I’d turn to if I wanted that ‘wow’ cleavage.

Overall I am very impressed with the S style, despite the fact that I found the cups too tall in the 32KK/70KK.  It’s great to have a different style of bra available to use bigger-boobed women, and in particular for those whose breasts are softer.  There have been many more S bras released since I first tried the S Wiśniówka and additionally Ewa is now able to make the bras in my PL size.  I would love to try other S bras to see if the 30L/65L fits me better than the 32KK/70KK, especially in terms of the height of the cups.

You can read more reviews of the S Wiśniówka here: