I have long been a fan of the Cleo lingerie range by Panache.  Their designs are young, fun and a bit different.


I’ve previously reviewed the Cleo Zia in 32J and found the cups too small so when I saw the Cleo Marcie at a bargainous price on Amazon I knew I had to give it a whirl.

Seeing as the 32J Zia hadn’t been big enough in the cup, I decided to go for the Marcie in 34J and 36J with a view to altering the band once I’d found the best fit in the cups.


First of all, we have the 34J (which is the sister-sizing equivalent of a 30K (a size not available in Cleo bras)): 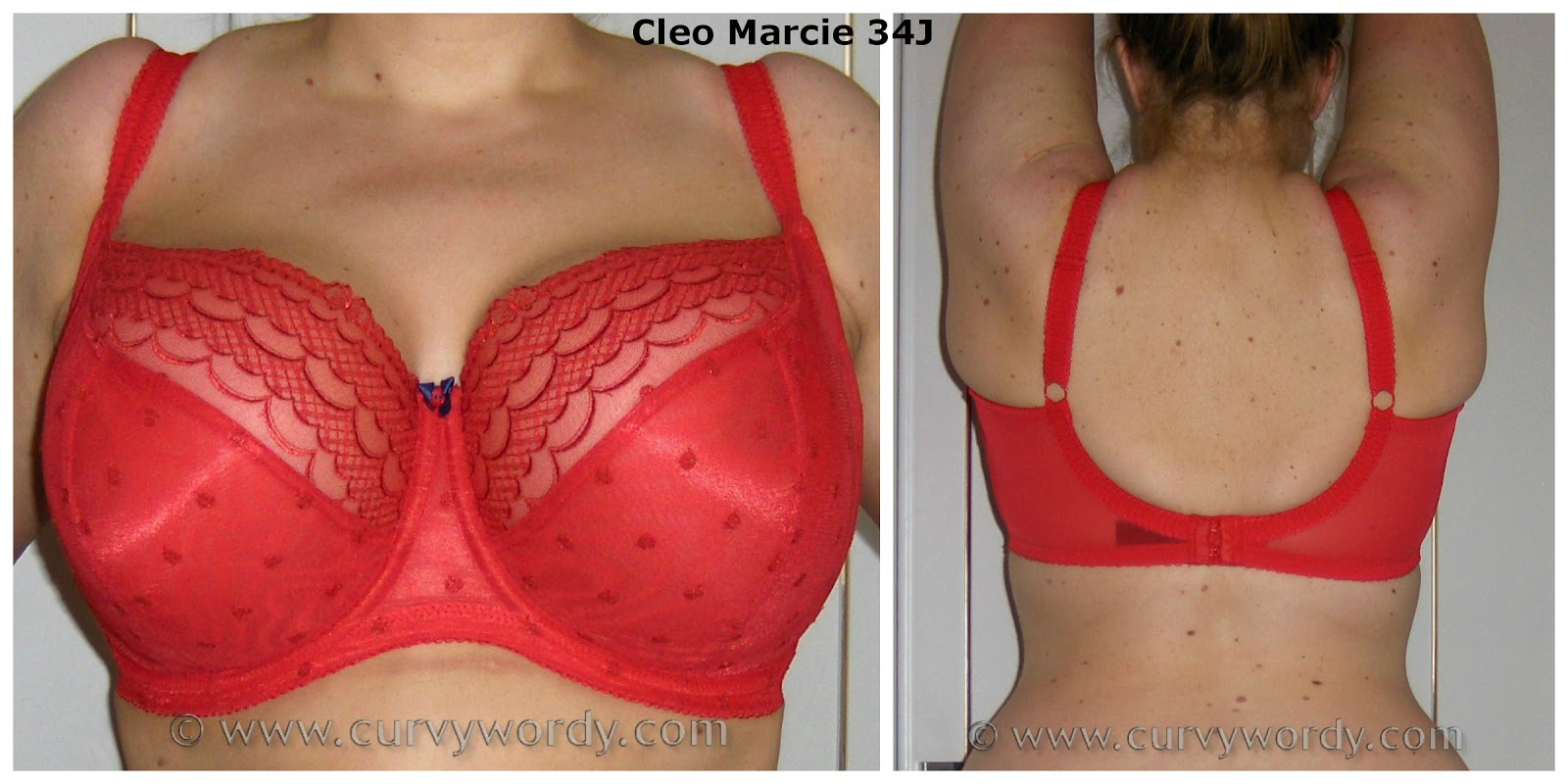 I loved the look of this bra.  It has sheer lace cups with no additional padding so it made a welcome change to the lightly padded Ewa Michalak bras I normally wear.  The red lace on the tops of the cups was lovely and I adored the red polka dot lace fabric which made up the bottom section.


The cups give a lovely, rounded shape, the like of which I’ve only ever seen before from Ewa Michalak padded bras.  I am so impressed with Cleo for engineering an unpadded bra that is not pointy – no mean feat!


The straps are halfway adjustable (although I daresay the adjusters could be forced onto the thicker front section if you needed the straps to be shorter) and I had them adjusted as tightly as possible here, without forcing the adjuster further.  I could have done with the straps being shorter but for this review I was happy to make do.


The band fastens with two hooks and eyes and there are three rows of eyes to adjust as the band becomes stretched.  I have to say that I wish Cleo would make their larger cupped bras with three hooks and eyes for more stability and support because two hooks just doesn’t provide enough for the weight of boobs in this higher end size range.


In these photos you can see that I am wearing the bra on the tightest hooks here and to me it felt very loose.  I would need to alter this band down to a 32 or even 30 as the 34 was just too big for me.  It felt very uncomfortable and rode up at the back.


The cups of the Marcie are deeper than many other UK lingerie brands but unfortunately I found the wires way too wide.  I had empty space at the sides of the cups and the wires poked me under the arms.  The good news is that the central gore laid flat on my sternum and was not uncomfortable at all.


However, I found that the cups had a most peculiar fit.  They were a little big in the top lace section and if I’d kept this bra I would have needed to put a stitch or two in the give a better fit. Conversely, the bottom section was actually too small depth-wise, and created a weird ‘quadboob’ effect in the middle of the cup, as you can see from the final picture above.  You can also see from the angled photos that my breasts are made to point down somewhat and are rather compressed by the cups.


All this points to the 34J being too small in the cup, so I tried the 36J (which is the equivalent cup size using sister sizing to a 30KK):

Naturally, the 36 band was way too big for me and even though I only had the bra on for a short time whilst trying it and then taking photos it was a relief to take off and stop the horrible ‘riding up’ feeling.


The cups on the 36J were better in terms of size, but the underwires went all the way round to my back as they were way too wide.  They were so wide that they were frightfully uncomfortable!  The depth of the cups was better but I had even more loose fabric on the top section than I’d had with the 34J.


Had everything else with the bra been perfect, I would have been happy to alter the band down by 2-3 sizes and put a stitch in the top section of the cups to sort out the excess fabric issue but sadly this bra was a fail for me on many different levels that it was not worth keeping.


The shape I got from the 36J was fantastic – as you can see from the photos above my boobs look round, uplifted and projected forward.  I still found that upon close inspection some of the seams cut into my breast tissue (bizarrely on my left boob this time, whereas the effect was more apparent on the right in the 34J), particularly when I pushed my chest out or raised my arms, and I am not sure how much this would show under clothes.


Other blogs (see links below) have talked about whether this bra is likely to be a better fit for full on top or for full on bottom boobs.  My boobs are relatively balanced so I can say that it’s not the optimal choice for narrow, fairly close-set boobs that are balanced, but I think that due to the loose fabric on the top section of the cups the Marcie would work best for those who are fuller on top.


I wanted so badly for the Cleo Marcie to work for me but sadly I had to admit defeat and have returned both the 34J and 36J for a refund.  I won’t give up, though!  I am determined to find a Cleo that works for me and when I do I will buy multiples!


The Cleo Marcie is available in sizes 28-38 D-J and you can read other reviews here: