For some time now, I have been lusting over the gorgeous corsets available at What Katie Did.  I have seen them on several blogs, including (of course) Georgina’s at Fuller Figure Fuller Bust.


In particular, I have been itching to try the Morticia corset.

It’s a classic steel-boned corset which is designed for waist reduction.  Now, I am not especially interested in reducing my waist measurement but I am interested in wearing a corset that’s comfortable.  And I have read countless reviews that say how comfortable and easy to wear this is so I was sure it was one I would have to try for myself sooner or later.

One day in December last year, I was at a loose end in London so I decided to visit the What Katie Did boutique off Portobello Road. Once instore, I was amazed to see all the wonderful vintage-style lingerie, corsetry, shapewear and hosiery on offer.  Sadly, the lingerie was not available in my size (such a shame – it would be so much fun to have a bullet bra) so instead I made a beeline for the corsets.

After a few minutes I spoke with Aimée, who works in the store.  She was incredibly helpful and asked for my waist measurement.  When I told her it was 29-30″ she said I would need a size 26 corset as the idea is that you go for around 4-5″ below your waist measurement to take into account the waist reduction that can be achieved.  She thought the Morticia corset would be a great one to try first so she went to find one while I duly went into the changing room and got undressed.

A short time later, Aimée came in with the Morticia corset and helped me to put it on.  I found doing up the fasteners (knows as busks) a trifle tricky but I got there in the end.  My boobs got rather in the way so it was easier to stand in front of a mirror to fasten them.

Aimée then tied the corset at the back for me.  She told me that it’s possible to get the corset fastened tighter with someone doing it for you, rather than doing it yourself, which of course I would have to as I live on my own.

I must admit it felt rather lovely having the corset fastened so tightly.  There’s something reassuring about being bound snugly – perhaps it goes back to being a baby wrapped in blankets, who knows – and I very much liked the sensation of the corset on my body.

Aimée was kind enough to take some photos for me: 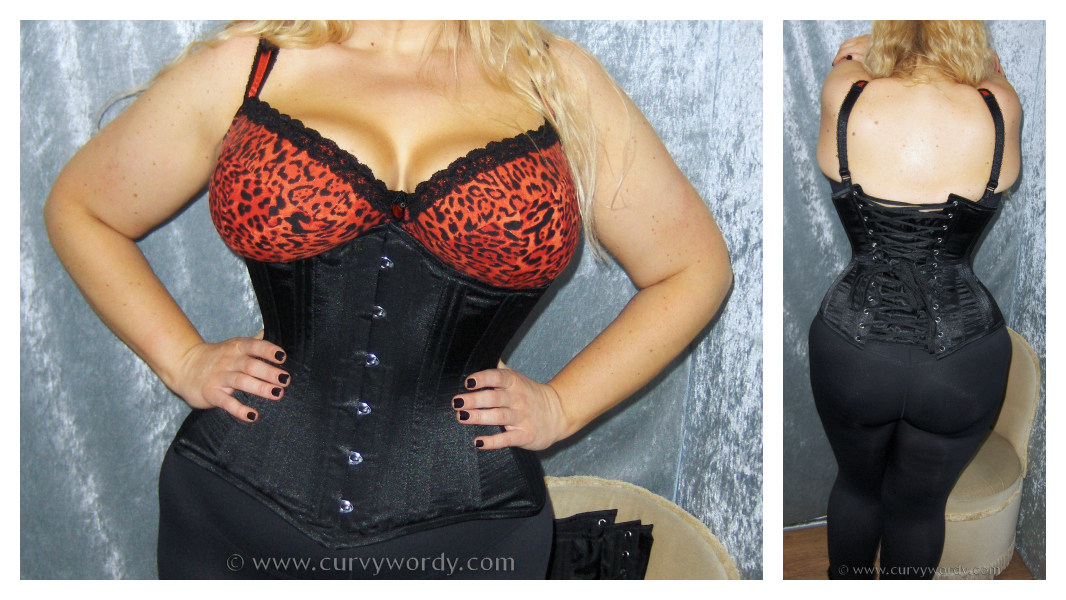 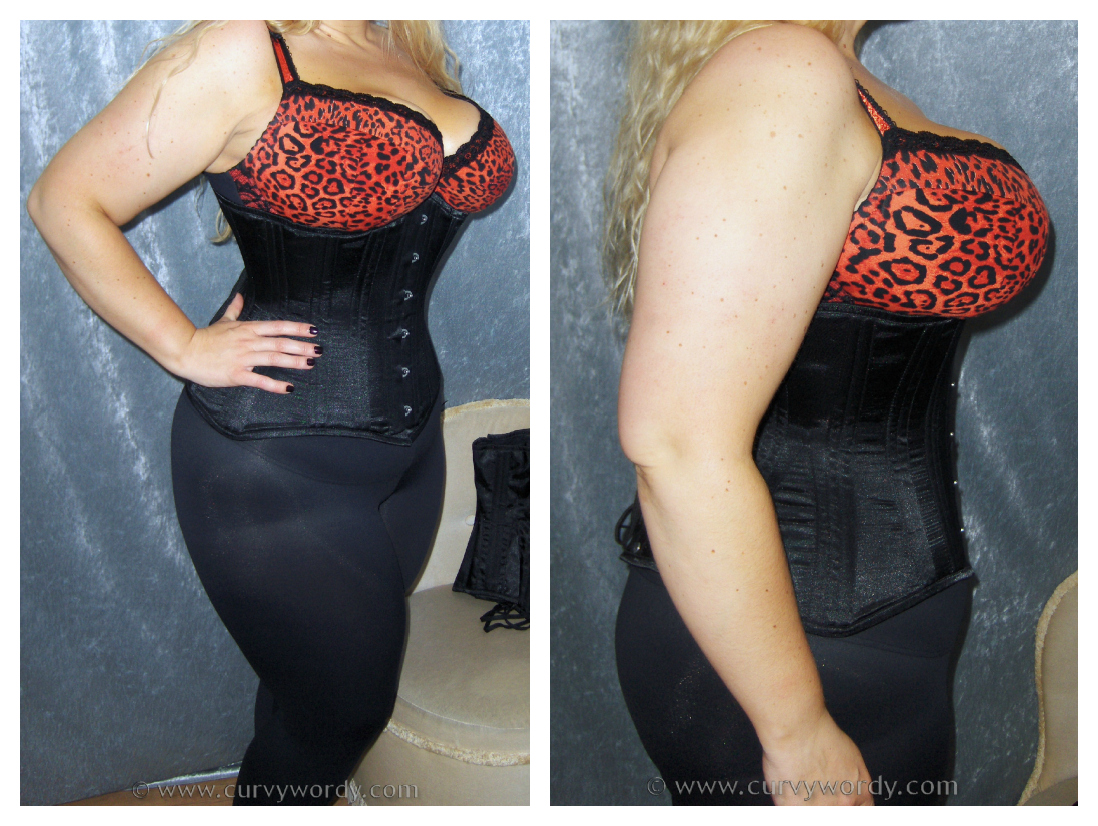 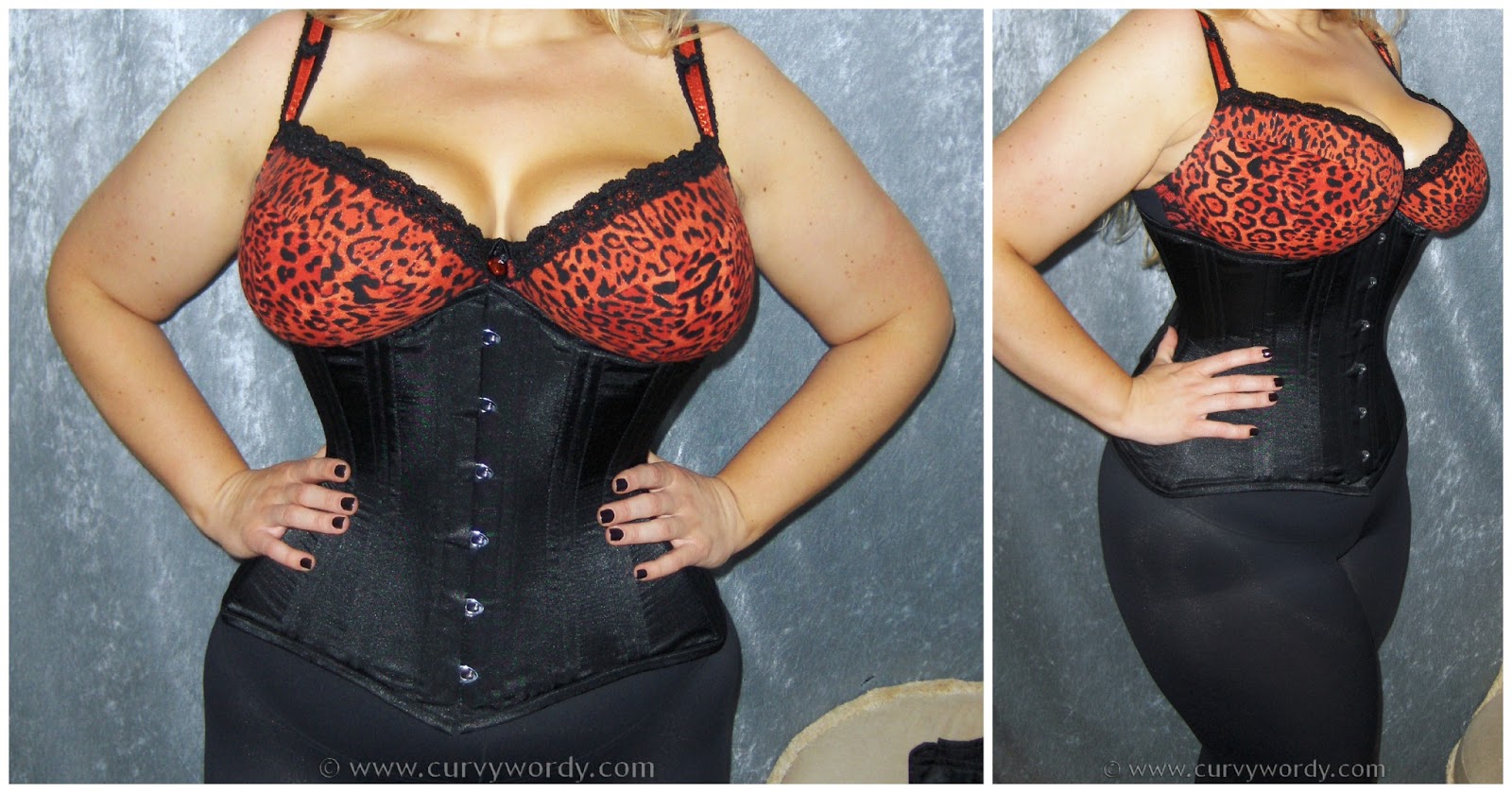 As you can see, the Morticia corset generally worked very well on me.  It has gored hips, which means the corset allows for those like me who have a large waist to hip difference (mine is 17-18″).  The corset is constructed in such a way that the waist can be reduced as much as desired without pulling on the hips, meaning that the Morticia does not cut into the hips at all.

Being made from 18 steel flat and spiral bones means that the Morticia will last a very long time.  Cheaper corsets (especially those bought on the high street) are usually made with plastic boning that bends almost instantly and does not offer the same shaping effect as steel.  You may think it sounds uncomfortable to wear steel boning but I can assure you the opposite is true.  I’ve tried a plastic boned corset before and that rubbed because the bones bent out of shape and then irritated my skin.  The steel bones stay as they are and hug your shape without chafing.

The Morticia is lined with cotton for comfort and there is a modesty panel that you pull across behind the lacing at the back to save unsightly bulges glimpses of lingerie.  The panel is quite generous, which was very much appreciated by me with the significant difference between my waist and hips!

The Morticia is a very glamorous corset and could easily be worn as outerwear instead of underneath clothing.  I love how the seams add to the look of the corset and I was interested to discover that it can be made to order in a number of colourways – I quite fancy a royal blue with black contrasts.

However, the Morticia was not 100% perfect on me.  I have a short torso and the Morticia was a little too tall in the body to suit me properly.  You can see how the top of the corset is pushing into my bra, giving my boobs a funny shape.  I could possibly have minimised this effect by tightening the straps of my bra but they were already reasonably tight so there wasn’t a huge amount that could be done here.

Looking at these photos again, I think that a half cup bra would be better suited to corset wearing and I would be interested to see what the Morticia looks like with my CHP Kurczak, for instance.  I would also like to try putting the corset on again and placing it slightly lower on my body to see if that made a difference, although I think it would migrate to its natural position, which is where it is in these photos.

Aimée was keen to help find a corset that worked for me so she suggested I try the Mae:

The Mae was WKD’s first corset to feature gored hips and although it is less curvy than the Morticia Aimée hoped it might work better for me as it was not shaped at the underbust. 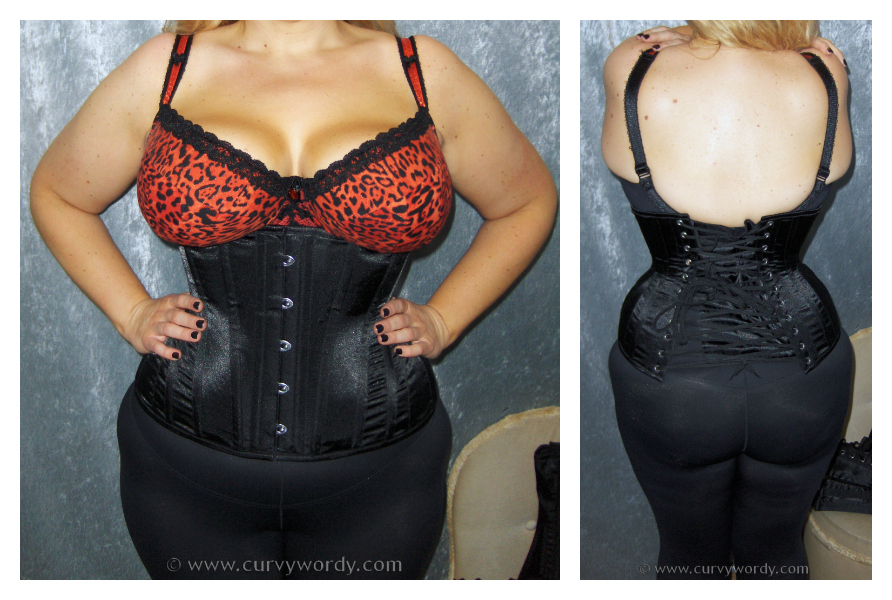 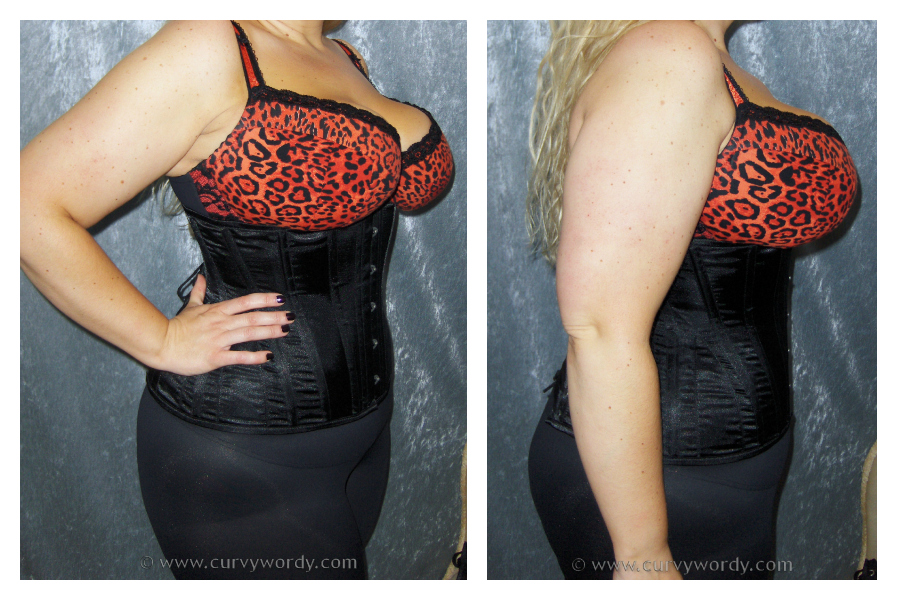 Sadly, the Mae was not good for me.  You can see that it has the same affect on my boobs/bra as the Morticia but more noticeably it cuts into my hips quite significantly.  It was also not possible to pull the waist in as much as we had with the Morticia, even though this was a size 26 too, so this was definitely not the right corset for me.

Nonetheless, it was interesting to discover that there are different kinds of corsets to suit different body shapes – I had no idea!

I eventually left the What Katie Did store empty-handed but with a heavy heart as I had been so looking forward to getting my own corset at last.  However I didn’t want to make an impulse buy as at £159.50 the Morticia is not something I can afford to buy on a whim.

It’s been useful to write this post and look back at the photos taken on the day and I think I should definitely try Morticia again.  Additionally, I think it would be great to try and overbust corset as this would not have the boob/bra problem I have experienced here.

I think the Storm corset would be the perfect overbust corset for me to try.  The description says it is perfect for busty girls over a C cup (busty???) so I think it would be good but I can’t help but wonder how it would cope with my L cups…

I would also like to find out how much a custom-made corset would be as it might be that my figure would be better suited to one of these.  As far as I know, this is not a service What Katie Did offer but I am sure there are heaps of places on the internet who may be able to help.

I thought it was interesting that Aimée asked me why I wanted a corset when I already have a corset-like figure.  I have been asked this before by various friends and although I am always very flattered by their words my answer is that I want to try things that other people have – surely that is just human nature?  Many of my friends have corsets and I love how they cinch everything in and give a streamlined look.  They are also ridiculously sexy!  Who wouldn’t want to have a shape like that?  So, although I may already have an extreme hourglass figure, I’m just like everyone else and want to own a variety of corsetry, shapewear and lingerie items.

Do you wear corsets?  Where did you get yours from?