Ever since I first discovered Ewa Michalak lingerie, I have been longing to try their swimwear.  I got all excited earlier this year when I saw pictures on their Facebook page of the new designs and couldn’t wait to try them for myself.

However, the months passed and the swimwear did not appear on their website.  I checked regularly but still I could not see anything.  It was only during a conversation in a Facebook group I belong to that I became aware that the swimwear was available to order, but one had to contact the Ewa Michalak team directly (via email at sklep@ewa-michalak.pl), rather than order from the site.  Cue quite possibly the fastest email I have ever sent!


Although the colourful bikinis were very pretty, I have found in the past that light-coloured swimwear tends to show my every lump and bump (although I always admire how pretty it looks on other people’s bodies!) so I decided to go for plain black.

The picture above shows the CH Bikini, which I will review next, but you get the idea of the sort of thing Ewa Michalak were offering this year.

The Ewa Michalak team very kindly agreed to send me the PL Bikini in 65KK/30KK and briefs in 16/44. 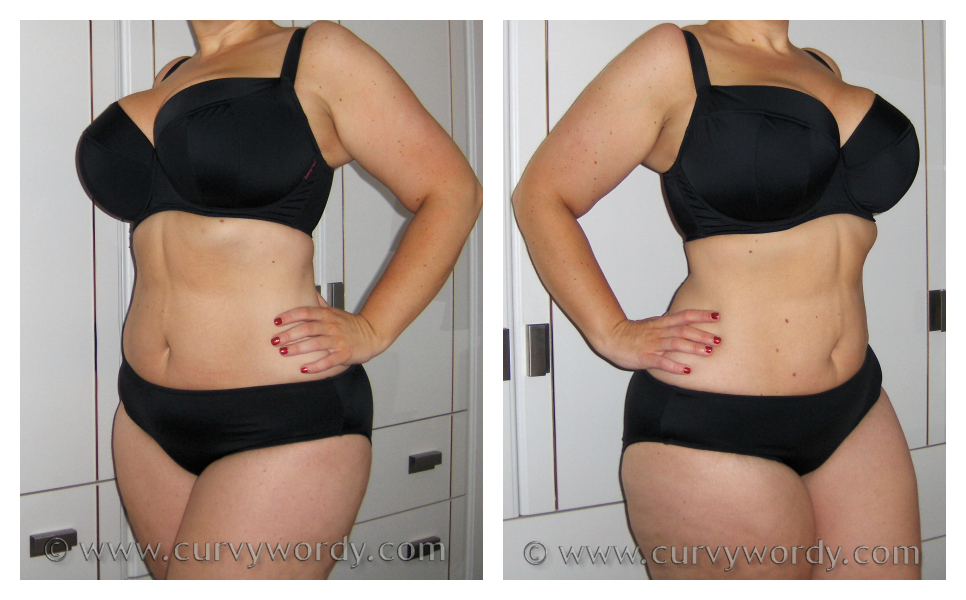 WOW! This will surely be my favourite bikini for a long time to come.  I love the plainness of this set – there are no embellishments or decorations at all, which mean it would be easy to mix and match the top with different bottoms if wished.

The cups are the usual lightly foam padded design as featured on all of Ewa Michalak’s PL bras.  They are overlaid with a typical swimwear type of material, which is very soft and has a hint of a sheen to it.

Interestingly, the bikini top fastens at the back with hooks and eyes, rather than a standard bikini clasp.  HURRAH!  At last, I have a bikini top that will not wear out after one holiday because the band has stretched out.  There are four rows of three eyes, meaning that this PL bikini top should serve me well for several summers to come.  I found the fit of the 30/65 band was pretty much true to size and the same as the majority of my PL bras.

The straps are half adjustable and the front section is made from strips of elastic covered in fabric.  I have not been a fan of these kinds of straps on bras but they feel rather different on this bikini so I am hoping they will be longer lasting and hold up my boobs better than I have found before.

To the untrained eye, this PL bikini top could be mistaken for a bra but I think its simplicity and the covering fabric used make it obvious that it is indeed a bikini top.

It’s interesting to see from the pics above that the 30KK is actually a little bit too small for me.  I have found my 30KK bras to be a good fit, but have decided for my next order I will try 30L if the cups have removable pads.  However, the bikini does not have removable pads so for me they cups came up a bit on the small side.

The size 16/44 briefs were true to size and gave great coverage on my backside, which is no mean feat which you have a meaty posterior like mine!  Admittedly, the briefs feel a little snug now but I am sure after a couple of wears on the beach they would stretch into the perfect fit for me.

I absolutely adore the fact that I can wear a bikini version of my beloved PL bras, meaning that I will have tan lines to match where my bras sit!  And the fact this set is completely plain is making me think about how I could personalise my bikini with a few embellishments bought from my local haberdashery store.  Oh, the possibilities!