Ewa Michalak do a wide range of brightly coloured and patterned lingerie sets.  These are appealing to me as previously I had mostly owned Freya sets which were unpadded and although sometimes brightly or interestingly coloured they paled into insignificance when compared to EM’s offerings.

However, it’s important to have a range of lingerie options in one’s drawer so a good neutrally coloured set is of course a must.  This is where the PL Cieluś comes in.

It is a pale beige/cream colour, meaning that it could be worn under a white shirt without showing up too much.  It is pretty much identical in design to the PL Toffik, with a silky, stretchy layer over the top of the foam cups.  However, the two bras are of quite different colours.  The Toffik somehow seems to match to the wearer’s skin colour somewhat (almost taking on a different colour when worn – sounds bizarre but I swear it’s true!), whereas the Cieluś is a very pale, delicate shade. 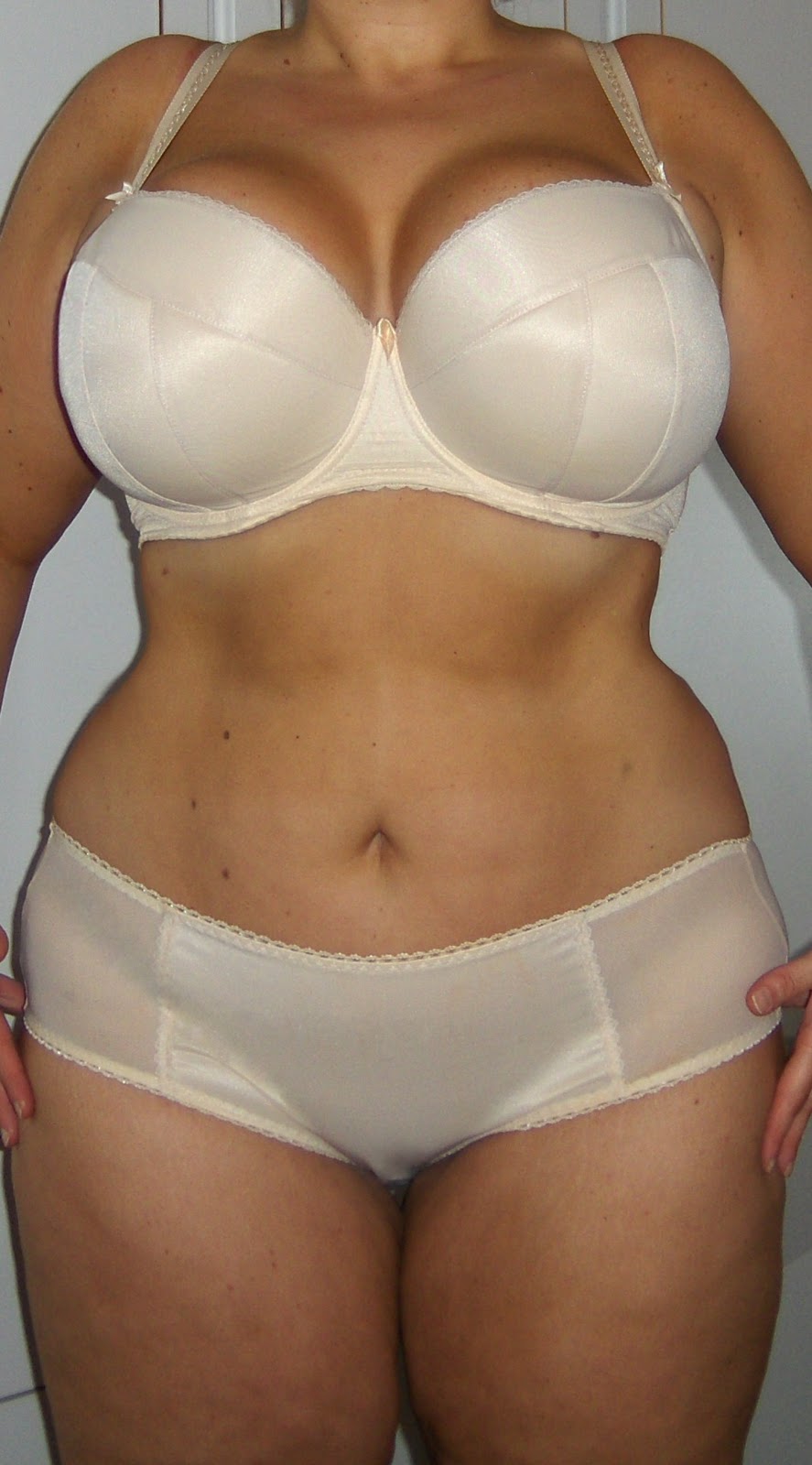 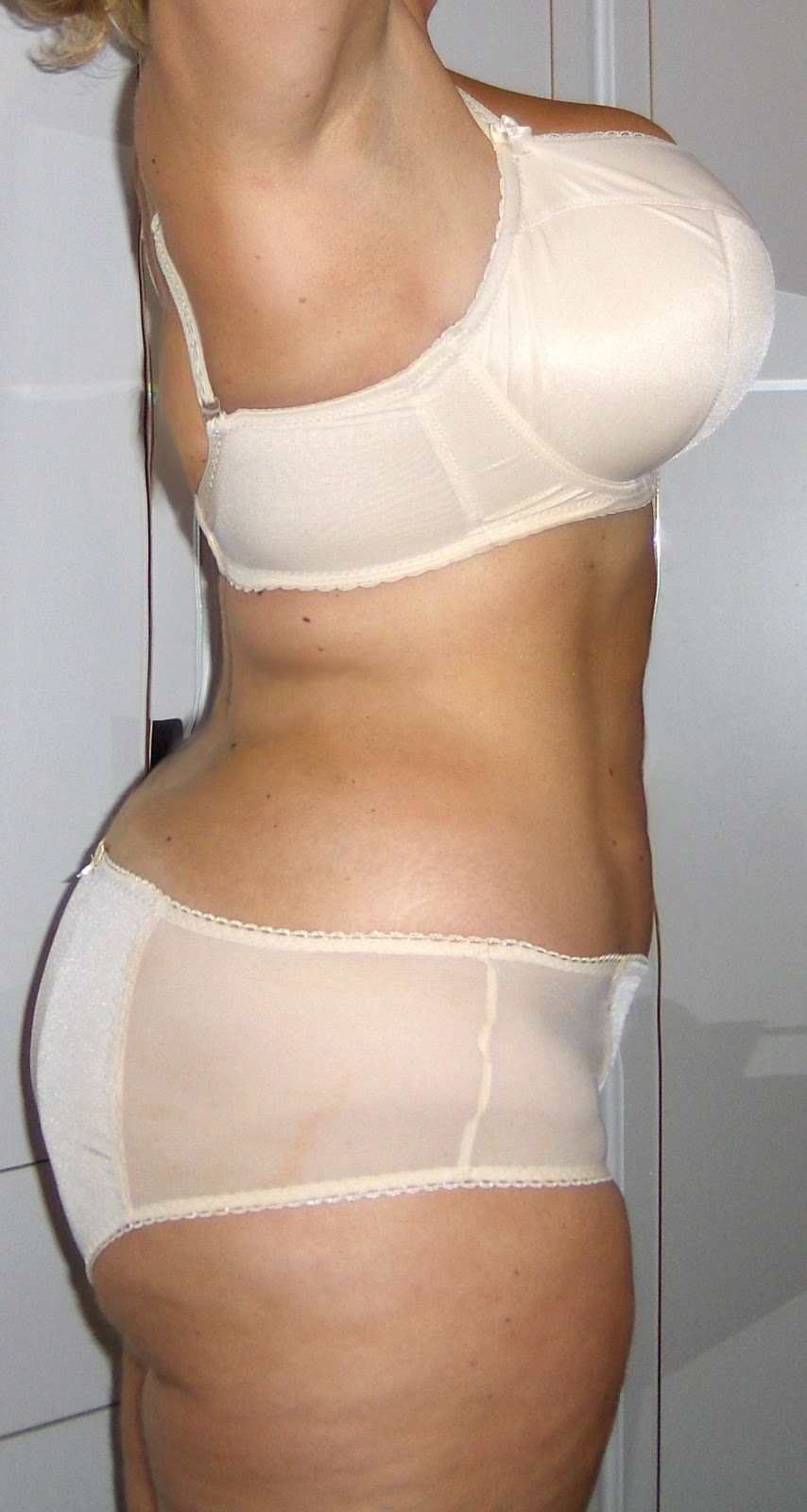 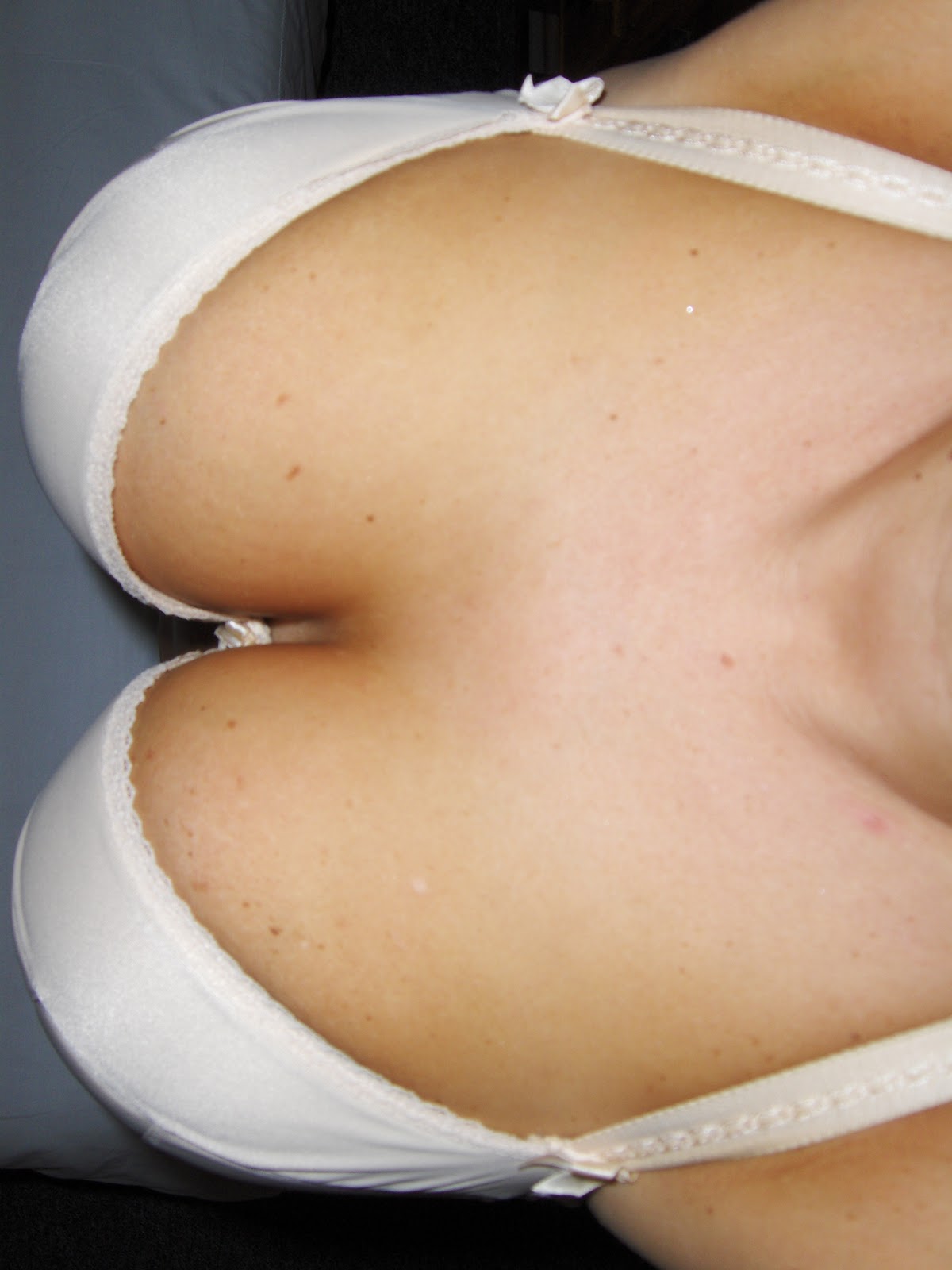 (The third picture above looks a little like the central gore is away from my ribcage – I can assure you this is not the case at all.  It sits firmly on my ribcage all day (and very comfortably so) but the bra gives me such great cleavage that the ‘push together’ effect starts higher up than with some of my bras.)

This bra has become one of my lingerie drawer staples as it acts as an alternative to a white bra (EM do not make a plain white bra in my size – the closest is the CH Lilia which only goes up to a 36H/80H).  I mainly wear dark coloured clothes but nonetheless it’s nice to have a bra on hand for when I wear something in a lighter tone…and of course I can wear it under my dark things too.

The band of this bra has a good amount of stretch but I’m pleased to report that it does not stretch further with washing/wear.  The straps have some give but stay put at the length set by the wearer.  I own this bra in a 36/80J.

The matching briefs are very comfortable and pretty.  I went for these rather than the thong…it was hard to choose between the two and I couldn’t afford both so I decided (for once!) to go for the practical option.  The thong looks something similar to that of the PL Retro.

This is a great set to cover all bases but especially for practical purposes in the absence of a plain white bra.

EDIT: A friend of mine has been asking whether this or the Toffik would be best underneath a yellow t-shirt.  After some rummaging around in the wardrobe I found I owned a yellow t-shirt so I took some photos this morning to show you all the evidence. 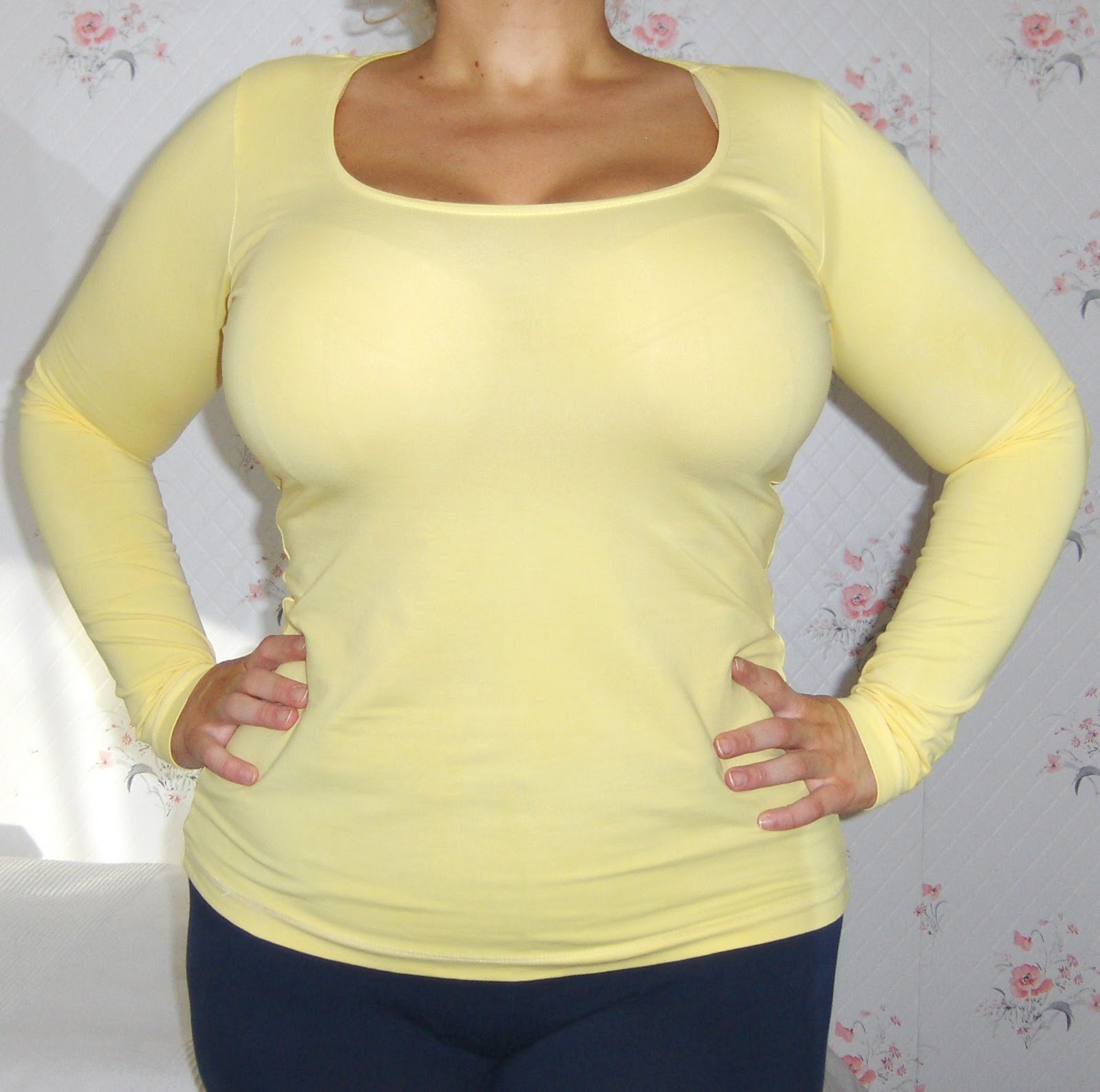 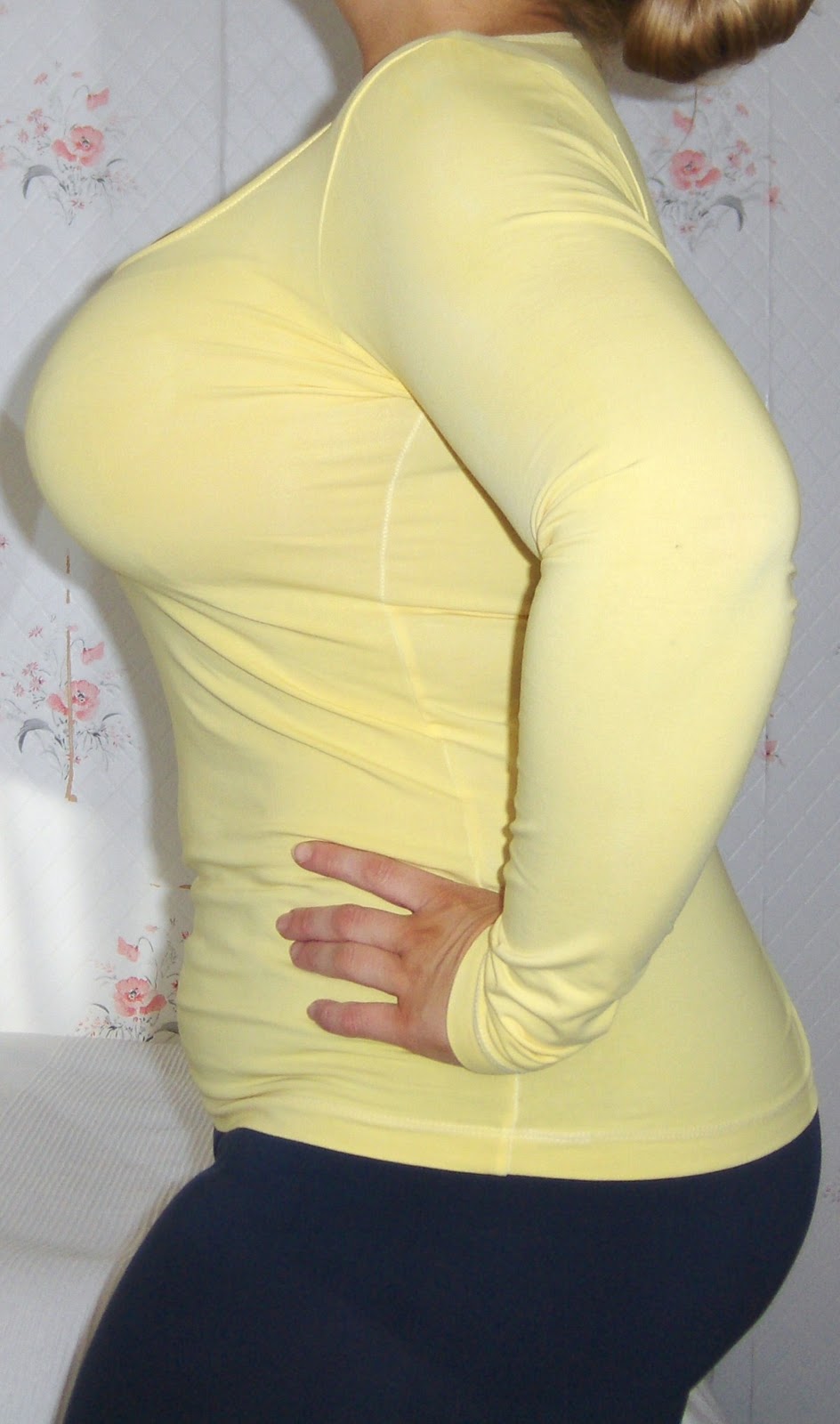 As you can see, it’s pretty good but shows up very slightly more on me that the Toffik.  I have worn dark leggings underneath to show how much a dark colour shows through this top.

For the Toffik, please see my other review here.