I recently reviewed the very pretty Cleo By Panache Minnie Red Spot Balconnet Bra and Briefs on my blog; today I’m lucky enough to be able to review another set sent to me by the very generous Panache team.

Wow! The turquoise colouring and leopard print combination really blew me away! This set is so attention-grabbing and the clash of colours as well as print and floral (on the lacy bits) work together brilliantly to make this set loud, proud, and certainly not aimed at anyone looking for demure lingerie. Turquoise, navy blue, white, lime green and fluorescent pink might not seem like colours that one would normally combine but seeing this set in the flesh I can tell you that they really do blend together very well indeed.

As with the Minnie, I opted for a 36J in the balconnet bra in order to get a good fit in the cups, and a size 18 in the briefs.

When this set arrived, I must admit that I was worried the bra would not work for me as it has a line along the top edge of the cups; usually I find this line cuts into my breast tissue and causes quadboob. This is opposed to a bra like the Cleo Minnie, which instead has a patterned and more open edge. I hope that makes sense! Anyway, I needn’t have worried as the line caused me no problem at all, as you can see from my photos.

The Maya bra is unpadded and has a three part construction, with two sections on the bottom of the cup and one along the top. The lower part of the bra is made from the crazy leopard print fabric and the top of the cup is made of a white, pink, and green floral embroidered lace, which I wouldn’t describe as stretchy but it certainly has some give to it. This should be good news for anyone with full on top boobs as tightness on the top of the cups will often cause double-boobage. Not a good look. There is a lime green bow at the top of the central gore, and the wings of the bra feature a soft and stretchy navy blue fabric.

I find that the Maya gives me pretty much full coverage so this isn’t a bra I could wear with a low cut top, but it’s perfect for wearing under higher necklines. The shape it gives me is brilliant – my breasts are lifted, rounded and supported in a way that looks quite natural and not too much ‘in your face’, as it were.

I love the narrow wires of Cleo bras and the Maya is no exception. The wires are not as narrow as Ewa Michalak bras but they are certainly much less wide than other UK lingerie brands such as Freya, Fantasie, and Curvy Kate. I love the forward projection that Cleo bras give me and the fact that they hold my boobs exactly where they should be – at the front of my body! The wires do not run too high under my arms and thankfully do not dig into my armpits. At the central gore, the wires are a good height and again do not poke me. The narrow central gore sits a couple of millimetres off my sternum but it’s not enough to cause irritation or a fit issue.

Not only do Cleo bras have narrow wires, but they also have deep cups. Finding bras with this combination, particularly at the higher end of the bra sizing scale, is the holy grail for ladies like me and when we find such bras we want to shout about them from the rooftops! The cup depth of the Maya is marvellous and perhaps even slightly better than the Minnie I recently reviewed. Again, however, I think I could have done with another half a cup in depth so maybe next time I will try a 38J and take in the band to make it work for me. In the meantime, this 36J works pretty well for me in the cups.

The band of the Maya is – not unexpectedly – too big for me, as I requested a 36J in the hope that the proportions of the cup would work for me. This is based upon the fact that I currently wear 32KK in Ewa Michalak bras (and probably need 32L/34KK), and a 36J should have the same cup depth as a 32K, only with a larger band. I have always found Cleo to be slightly on the generous side in their cup sizing so I can just about get away with a smaller cup size with this brand.

The bra’s band fastens with two sets of hooks and eyes and there are three rows of eyes, which give the wearer the option of making the band tighter or looser as they wish. Unfortunately my bra arrived with the middle eyes missing, which isn’t a big deal as I have to wear it on the tightest setting anyway but I was rather surprised to see this small fault.

In my recent review of the Cleo Minnie, I said it had the most comfortable straps I have ever worn. I was wrong – the Maya has the best straps ever! They are SO soft and the front section seems to be made from a felt-like but sturdy material. The back of the straps is elasticated and so it seems like the straps can only be adjusted halfway, but I think it would be pretty easy to force the adjuster onto the front section if needed. The straps have a pretty looped embellishment along the edges to stop the adjuster moving with wear and are attached to the back of the bra with circular rings that do not dig in.

I’ve taken to wearing my new Big Tights Company Prague Lady Lace Hold-Ups in my photos as I feel they add a certain something to the aesthetic of the lingerie set; you can see the tops of them in my previous photos but here you can see them in their full glory, along with my bargain Primark nude high heels. 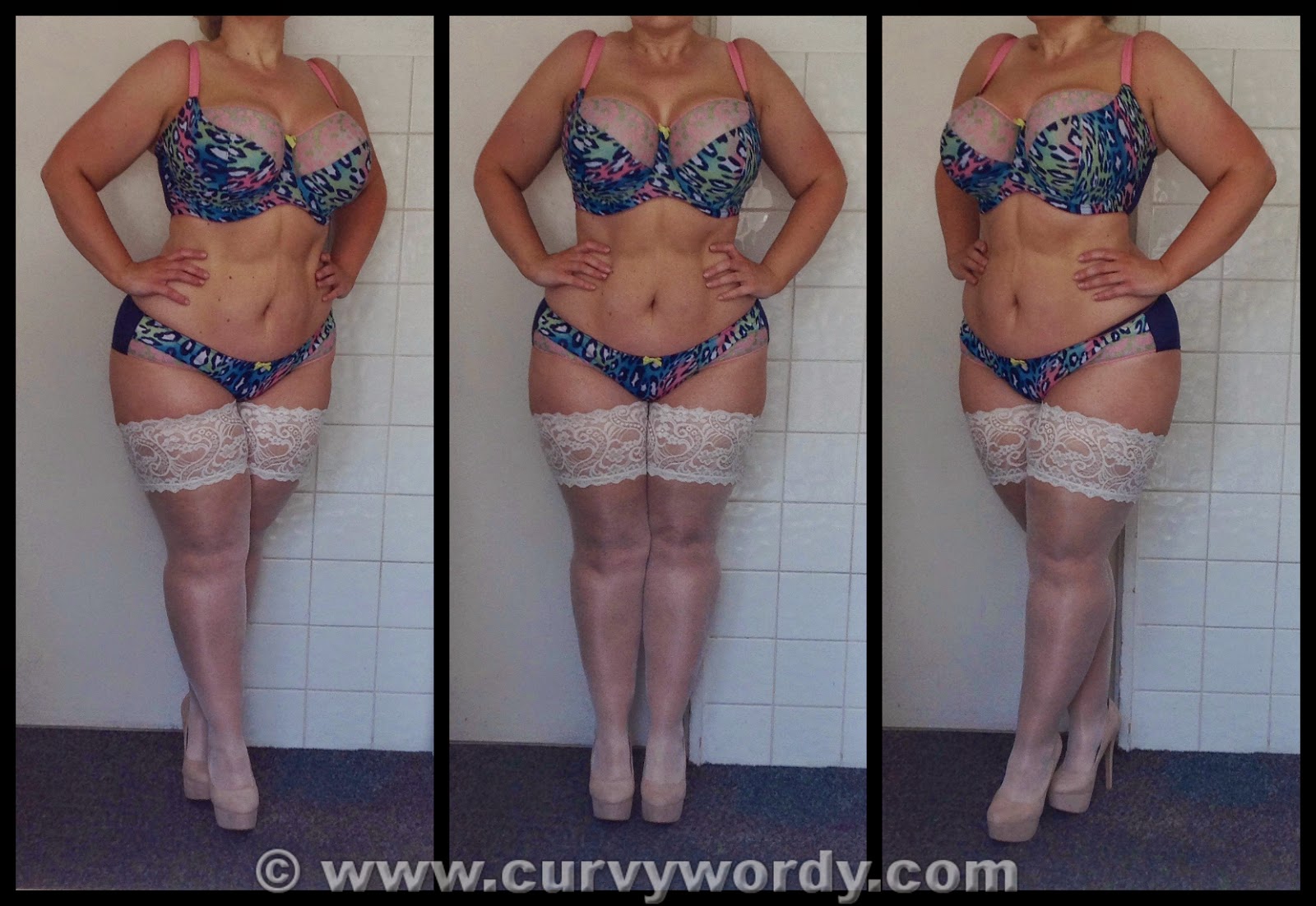 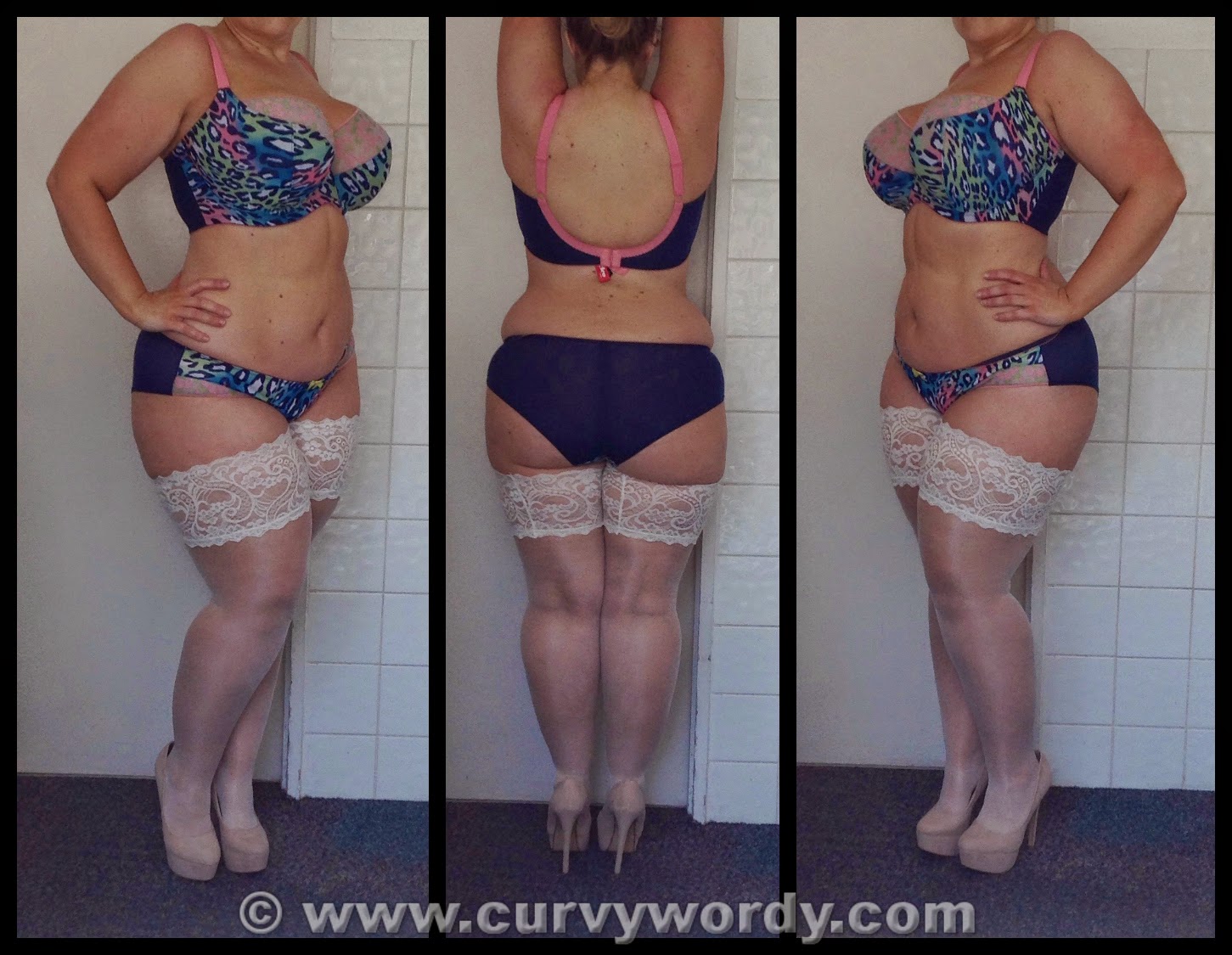 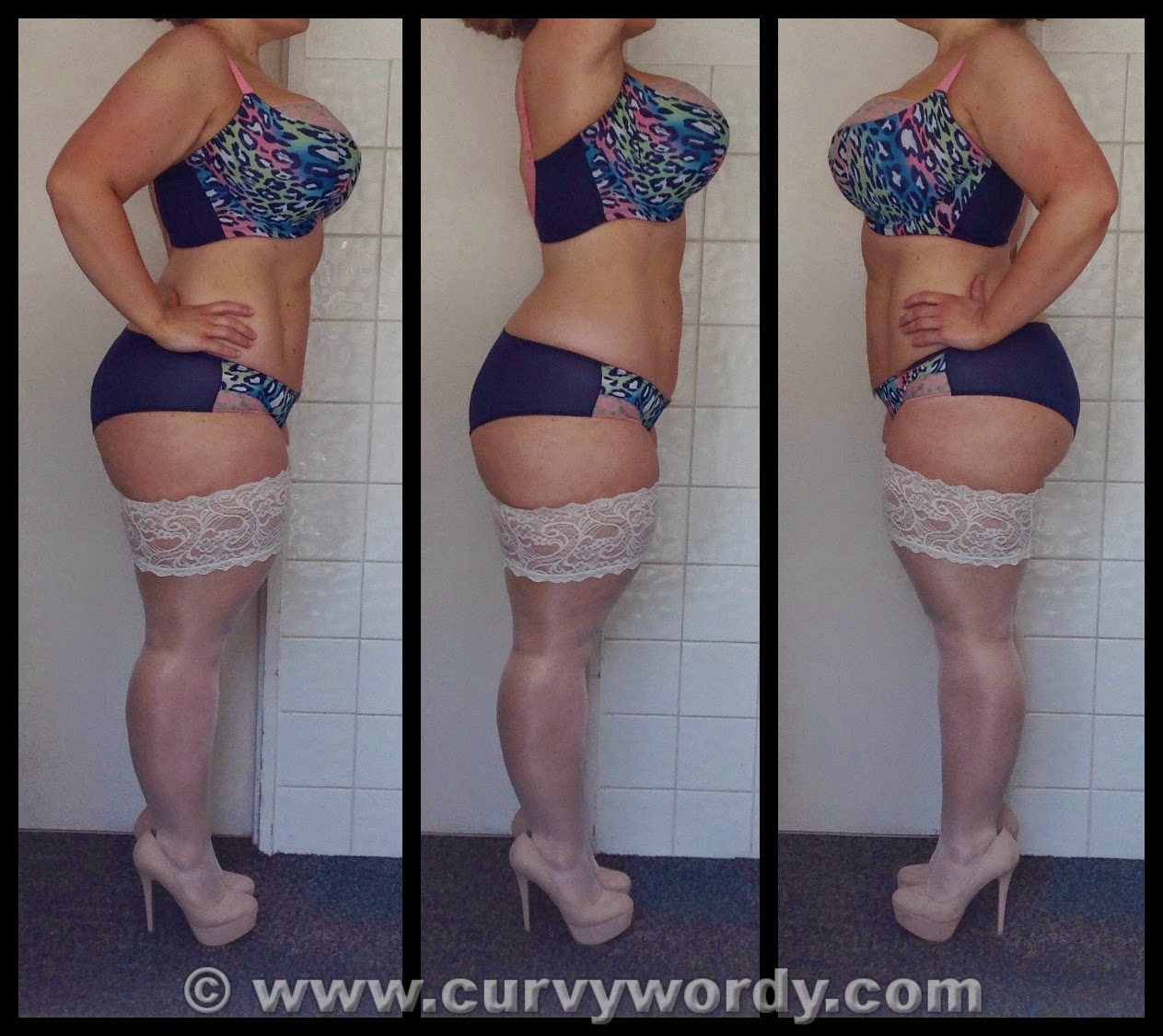 The size 18 briefs are, as you can see from my photos, pretty tight along the top for me and cut into the tops of my hips. They are a very similar cut and size to the briefs that go with the Cleo Minnie but the Maya briefs are definitely less forgiving along that top edge. I find them very comfortable to wear despite this, but do wish that Cleo would make their briefs and thongs in larger sizes as I know many larger plus-size women would like to wear this lingerie. Oh, and a high waisted briefs option would be amazing! The rear of the briefs is made from the same soft, stretchy, microfibre fabric used on the wings of the bra, so it all ties together perfectly.

I really love this set of lingerie and it’s wonderful to have such a colourful option to choose from. However, I do wish Cleo would expand their cup size range and also make their bands with three hooks and eyes instead of just two. That would give them an even stronger position in the lingerie market – surely that can only be a good thing?

If you’d like to try the Cleo Maya for yourself it’s available at Simply Be here.