What do you think about peplums?  My opinion varies, depending on who is wearing it and how.  For example, one of the local weather presenters on tv sometimes wears them and they look awful on her.  She is fairly tall and has a long torso but wears regular sized dresses (as opposed to those specifically for tall people) so they just don’t sit in the right place on her.


I have never tried on a peplum skirt or dress myself.  I have been told that the purpose of a peplum is to highlight one’s waist and/or hips…well, I am lucky enough to have been blessed with a figure that does just that all by itself, without the addition of a frill on my clothing.  But I have also been told that a peplum would look amazing on me so it’s something I have wanted to try, merely out of curiosity.

The lovely people at Simply Be have been getting in contact with a few bloggers recently to ask us to help promote their ‘Find your perfect Christmas party dress!‘ promotion so when they asked me to be part of it I was of course thrilled.


I had an abundance of pretty things to choose from but when I saw the WOW Peplum Illusion Dress I knew it had to be the one I tried.

Image courtesy of Simply Be

It does everything I would look for in a party dress – it sparkles, it appears to have some kind of shaping properties, it has a sweetheart or scoop neckline and it is not too short.  And, on top of all this, it has a peplum on the sides so it was my big opportunity to dip my toes in the water and try one at last.

The dress is available in sizes 12-32 so I went for a 14 as I was uncertain about how stretchy the sparkly section of the dress might be. 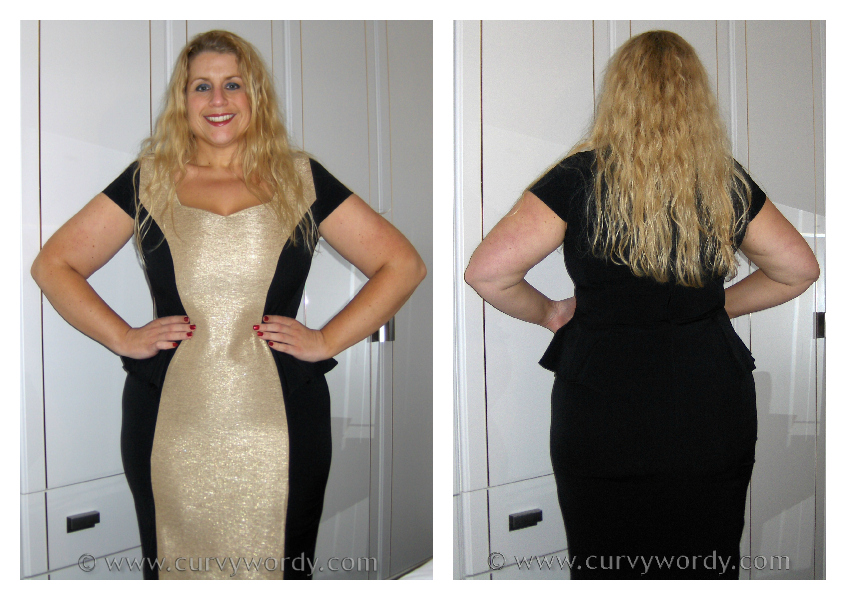 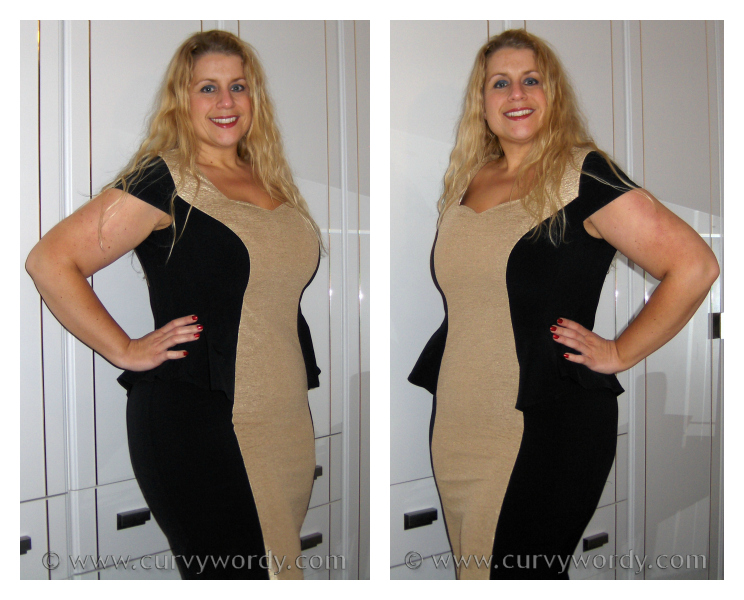 As you can see from these photos, my first try of a peplum dress did not get off to a good start!!  But I don’t think that was the fault of the peplum, but more the proportions of the dress versus my personal proportions.

So, first impressions of the dress when getting it out of the packaging were good.  The dress is mostly made of a very heavy and soft ponte roma fabric which offers excellent smoothing properties, ironing out one’s lumps and bumps with ease.  The front panel shimmered rather than sparkled, but it was incredibly pretty and I think would be flattering on any skintone.

The ponte fabric comprises 79% polyester, 13% viscose and 8% elastane.  That means LOTS of stretch and therefore a superior fit.  The front shimmer panel is 100% polyester, which means minimal stretch, as you can see from the side photo where my boobs are being constricted by the dress (ouch).

When I put the dress on I was shocked at how tight it felt across my 46″ bust.  However I wore the dress (and sat down in it) for quite a while before taking these photos so I had time to get used to it and adjust.  The dress definitely stretched a little with wear, meaning that it fitted a bit to my shape, but no amount of wearing would do anything about the gaping waist.

The skirt of this dress is VERY fitted and I felt the 14 was rather indecently tight on me.  Again, it felt better after I had worn it a while but even so I am not sure I would feel comfortable wearing it out of the house.

The side panels of the dress create the ‘illusion’ of a slimmer figure – because they are dark, the eye is drawn to the shimmery front panel and it appears that the sides are simply a shadow…or something.  I can see how this is the case from some angles, which may appeal to some women.  Personally all I look for is a dress that fits well, regardless of whether it shapes or minimises or gives some sort of illusion, but it’s nice to have something in this vein available for those who like it.

The dress has a zip at the back (although I easily pulled the dress on over my head without using the zip) and the fitted skirt has a small split at the back.  Lengthwise the skirt came down to just below my knee, so it’s very modest.

So, as things stood, I had a dress that felt too tight on the boobs and hips/bottom but was too big on the waist.  Cue the addition of a belt to solve the latter issue: 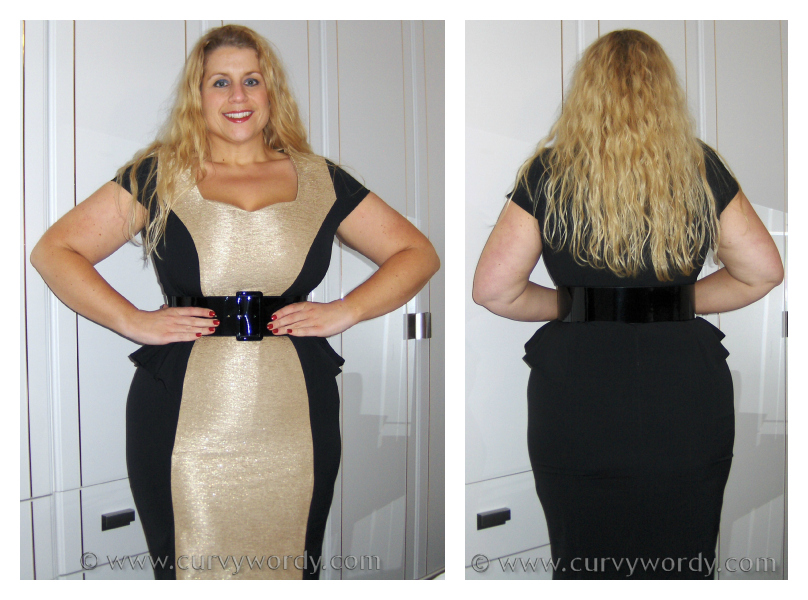 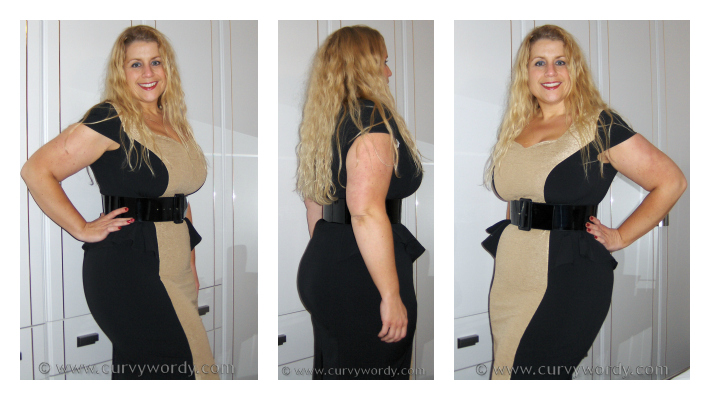 I do love how adding a belt can be like waving a magic wand and all of a sudden an outfit can look completely different.  Obviously it’s not going to solve the tightness across the bust and hips, but if the belt pulls the dress in then it will look better overall.  I also think that part of the reason the dress felt odd on me was because it was SO tight on the boobs and hips, and SO loose on the waist, so by adding the belt the dress felt tighter all over, which seemed to make more sense somehow.

I think the dress looks great with a belt.  Sometimes by adding one it can look wrong as the block of colour is interrupted, but in this case the peplum came to my rescue as the belt sat at the base of it, and so appeared to almost flow out from the belt itself.

In my opinion, this dress is cut to fit women with few natural curves, and the idea of it is to give them more of an hourglass shape.  I haven’t laid the dress out and measured it but I am pretty certain that the proportions are far less extreme than other Simply Be dresses I have tried in the past, i.e. there is less difference between the bust-waist-hips measurements and therefore the dress is more straight-shaped than some others.

I think this dress would have worked better on me in a larger size so that I had more boob and butt room.  I know the waist would have then been even bigger on me but seeing as I need to wear a belt regardless it makes little difference.

Overall I think the WOW Peplum Illusion Dress is a lovely item but if you have extreme proportions like mine then it would be best to size up and invest in a chunky patent belt to pull the waist in.  Once you get the sizing and fit right it’s a truly perfect dress for any festive party.