Summer’s here!  Well…August is here.  Unfortunately the weather in the UK has left much to be desired for the last few months and there have been few opportunities for people to soak up the sun at the seaside, at the park or in the garden.  That is, until this weekend when the weather has miraculously improved and we’re having a mini heatwave!

The previous poor weather hasn’t stopped me from poring over the latest offerings from the various lingerie companies and one of the bikinis that has caught my eye this season is the delectable Freya Limbo.

I absolutely adored this bikini and colourway when I first saw it on the Freya website.  I drooled over it for a long time and knew I’d have to save up to get it as my favourite colour is teal/turquoise and I love how well it works with dark brown.

A few months ago, Georgina from Fuller Figure Fuller Bust and I took a trip to Leia at Bluewater and we both got to try on a Limbo bikini.  She loved hers and was thrilled with how it fitted (you can read her review here) but unfortunately I did not get on with it.  It was a while ago now but I think I must have tried it on in the wrong size.

Some time later, I was offered the chance to review a bikini by the lovely people at Freya Swim.  I leapt at the chance and asked to give the Limbo another try.  This time, I went for the underwired plunge bikini top in 32JJ (available in sizes 28-38 D-JJ) and classic briefs in XL (available in XS-XL). 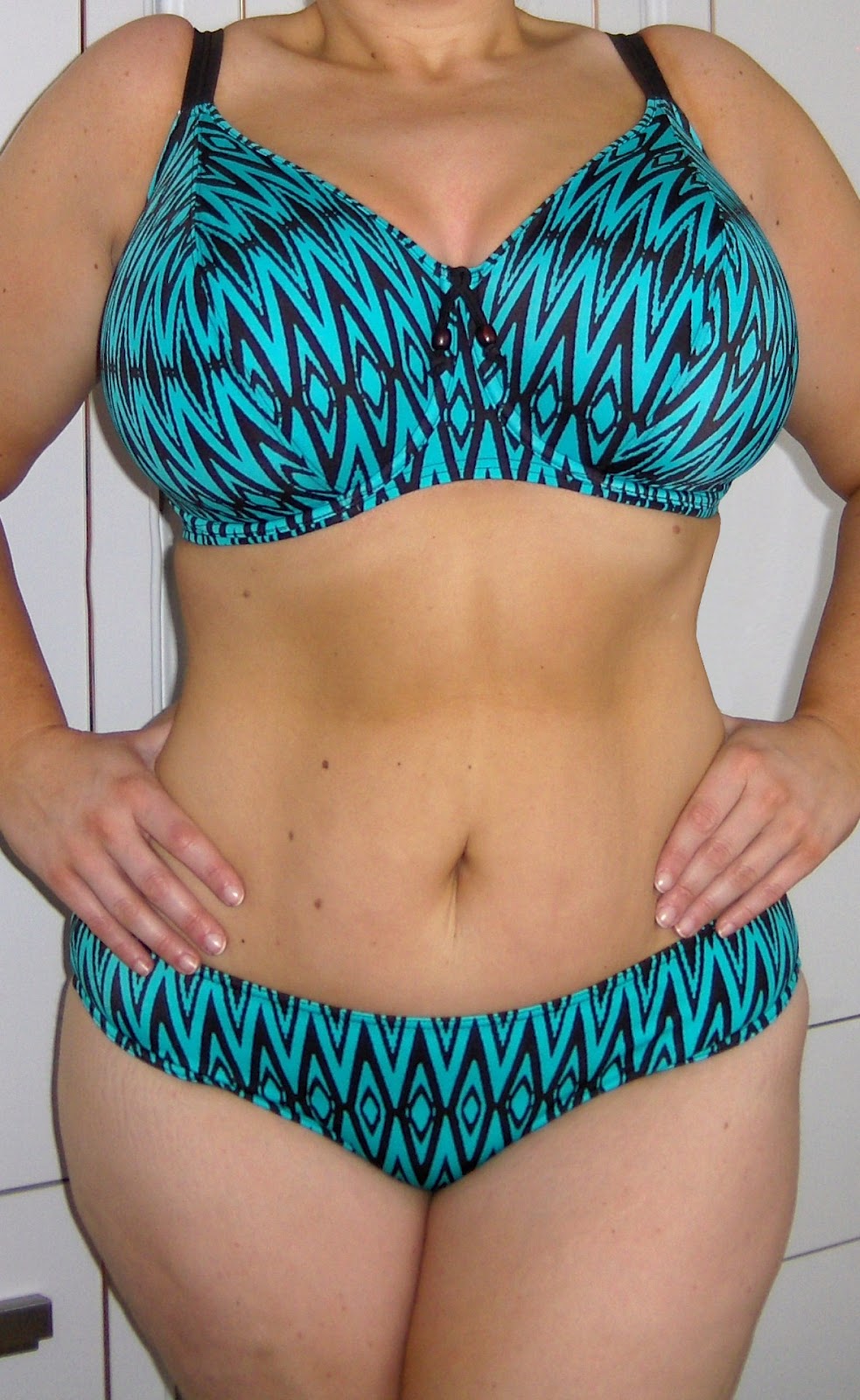 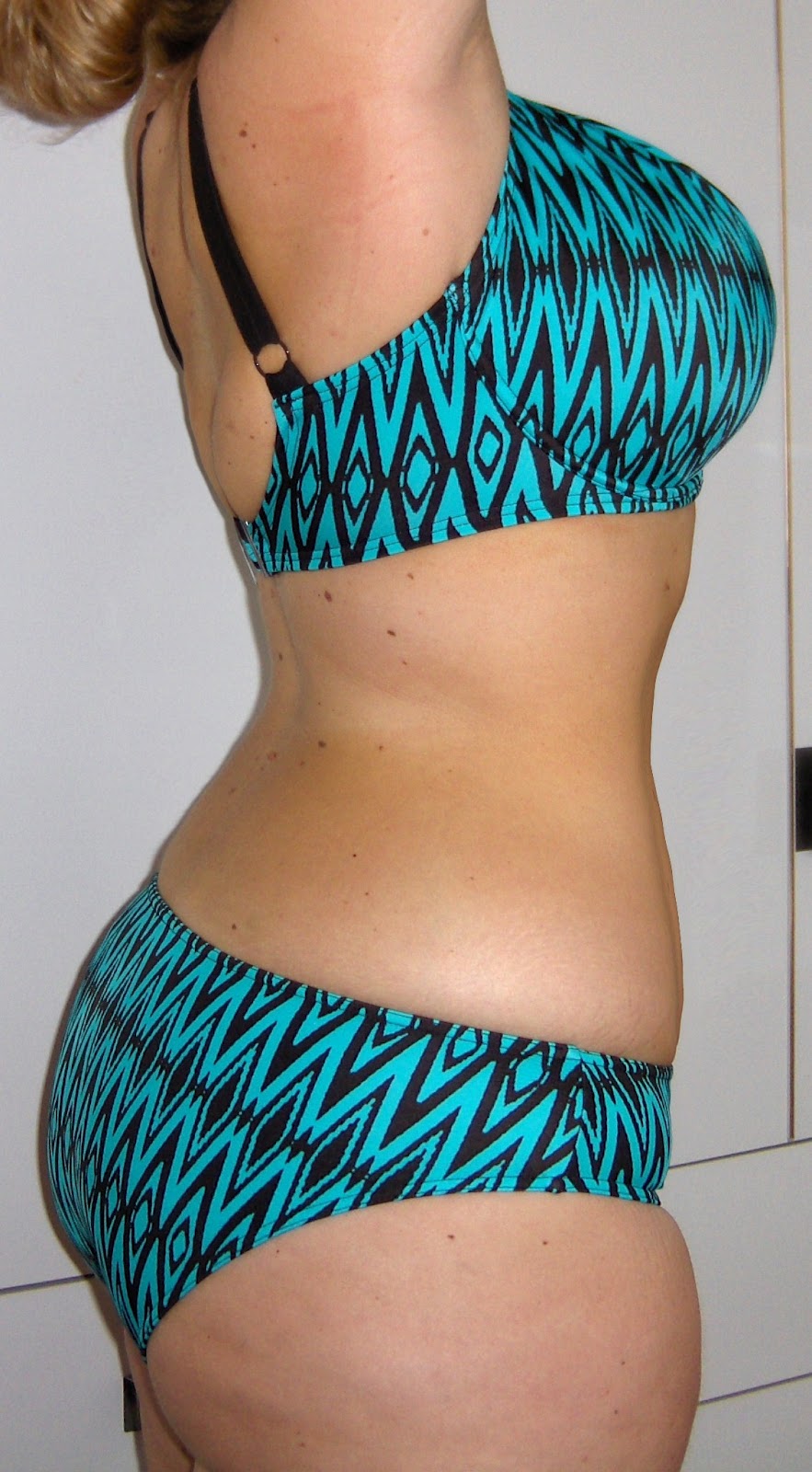 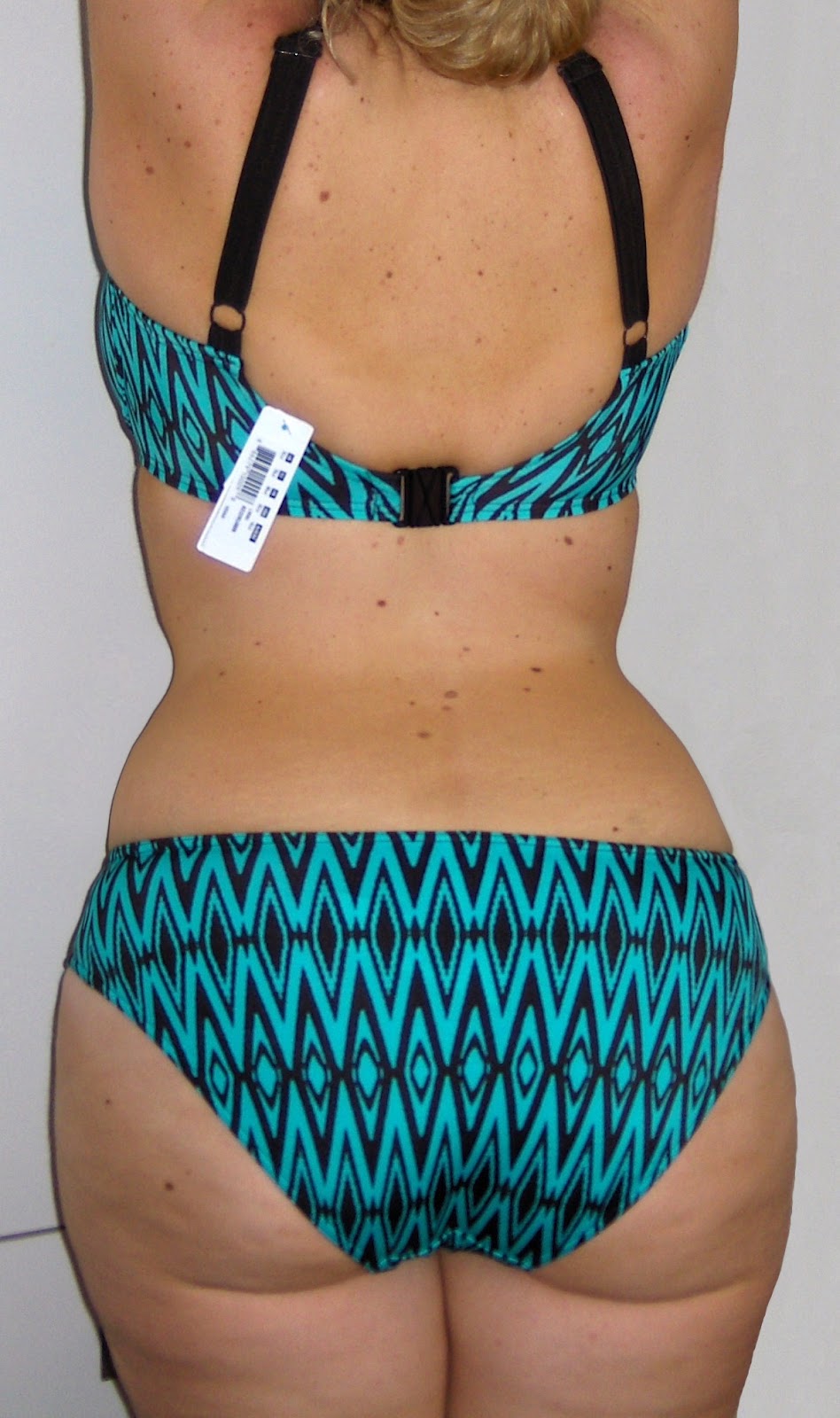 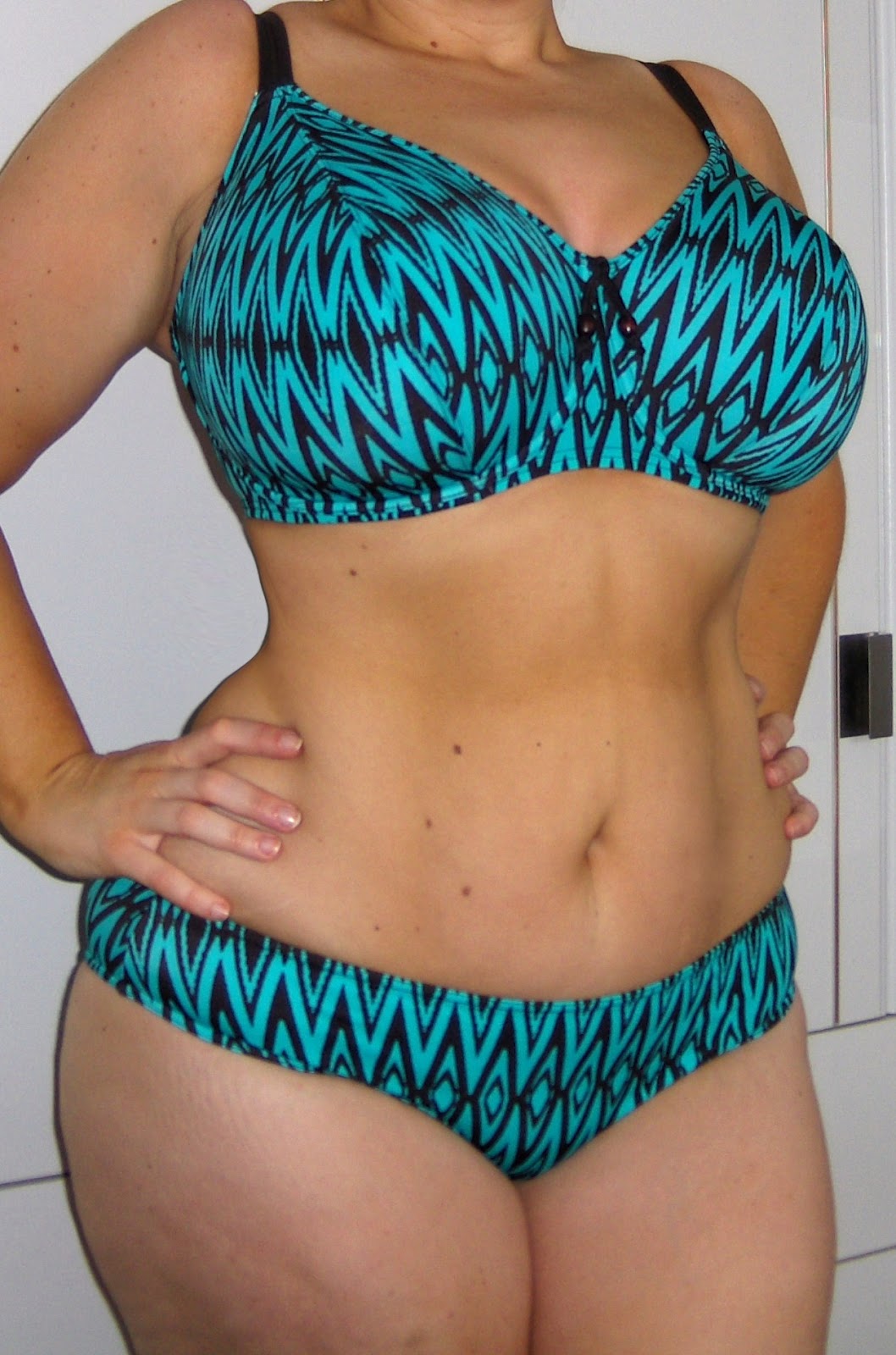 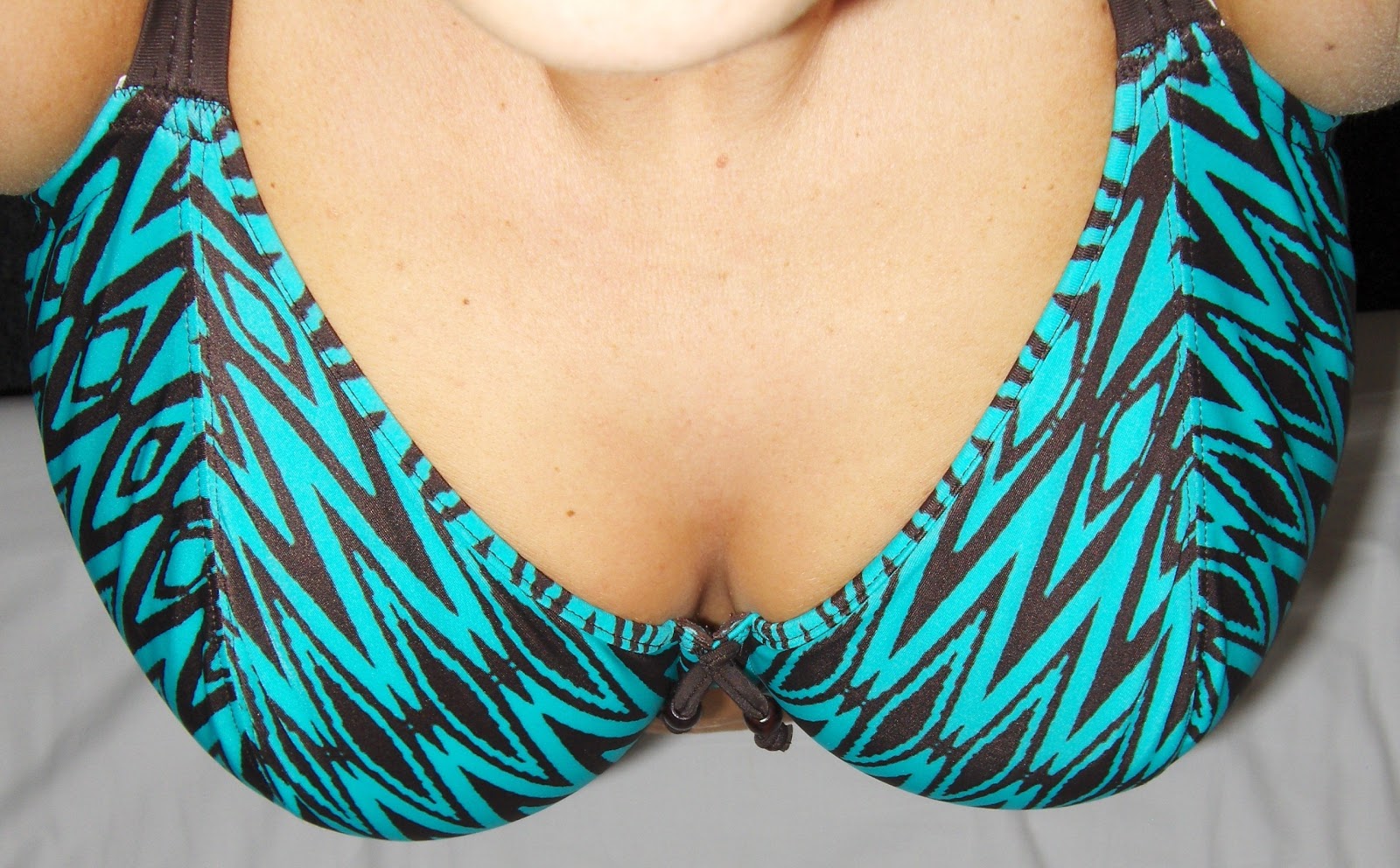 Heaven!  The Limbo bikini was every bit as pretty in real life as I’d hoped for.  The teal is a gorgeous spearmint green and the brown is very dark indeed.  The combination of colours puts me in mind of dark chocolate and mint sweets – something like Mint Matchmakers maybe.

I was pleased with how the cups fitted, although I did find the wires rather wide.  I also prefer less coverage from a bikini top and the Limbo ended up being rather full coverage. It’s described as a ‘plunge’ bikini top but the central gore is far higher than that of my Ewa Michalak bras.  This was very disappointing for me and I would not have described this cut as plunge at all.

As I find with most Freya bras and bikini tops, the central gore would not quite lie flat.  From speaking to other women, this is a common gripe amongst those with fuller busts.  In addition to this, the cups were rather shallow and did not give the forward projection I have become accustomed to from my EM bras.  I guess I have been spoilt and now look for the same uplift, shape and projection with every bra and bikini I wear!  I found the cup separation was a little too much for me – a narrower central gore suits me best and this bikini top had rather a wide one, unfortunately.

The straps are fully adjustable and I found that having them around 3/4 adjusted was about right for me.  They were really comfortable and did not readjust themselves with wear.

The 32 band was a good fit and offered the right amount of support for my heavy breasts. It fastens with a regular bikini clasp but it’s one that’s far bigger than what I am used to.  Did bikini clasps suddenly get bigger or have I just been wearing bikinis with tiny clasps?!  Either way, it worked well and felt very secure.

The Limbo bikini top feels strong and supportive and I am sure it would serve me well on holiday without stretching or losing support.

I’m afraid I had the usual issue with the Limbo briefs: they were too small.  The XL – the largest size available – is the equivalent of a size 16 and my 47″ hips exceed the size range.  I could have gone for the tie side briefs like Georgina did but while they look great on her I personally prefer more coverage at the sides.  I also like knowing that my bikini briefs won’t come undone by accident!

I found the briefs were also rather skimpily cut at the rear.  I know I was wearing at least one size too small but even so I struggled to keep the briefs from going into a mega wedgie!  Not a good look.  It would be better for me to buy some plain dark brown briefs from somewhere like eBay instead, rather than wear these ones which are clearly too small.

In conclusion, the Freya Limbo is an absolutely beautiful bikini.  Personally, I have some issues with the fit but if you like wide-ish wires and shallower cups then this should be a winner for you.  It’s certainly a stunning bikini!


To see my review of the Freya Charleston bikini please click here.