If you’ve been reading my blog recently, you’ll be aware of my efforts to find my true Curvy Kate bra size.  So far, I have discovered that the Showgirl range (including the Tease Me, Tempt Me and Thrill Me) do not come in a large enough cup for me.  I have also found out that the Emily is not right in the sizes I tried.


My next try was the Princess which I went for in Wine and in Black. 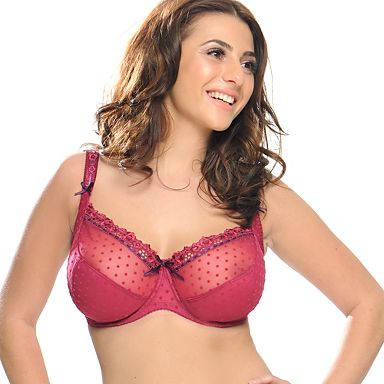 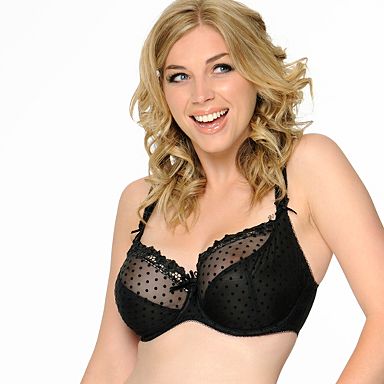 
Before trying this style on, I already felt rather sceptical about it.  It looks rather more full cup than I’d like in these pics and in the others I’d seen.  Don’t get me wrong, it seemed to be a very pretty bra, but perhaps not one for me.


I was very pleased to be proved wrong.  It’s such a pretty style with delicate bows on the centre gore and at the point where the straps meet the cups.  The cups themselves are made from a delicate spotted mesh fabric, which is double lined on the lower half for extra support.  The polka dots have a kind of velvety feel to them – very sexy!  The tops of the cups are edged with really beautiful floral lace and a line of ribbon, which is most noticeable in the non-black colourways.


The straps are not officially fully adjustable due to embellishment down the front of them but I have read elsewhere that it is possible to force the adjuster clip through this section if necessary.


The band has some stretch to it and fastens at the back with three hooks.  It’s a pity the polka dot fabric was not used for this section but I can only assume it’s because it is not stretchy enough.


First of all, I tried the Princess in black in a 30K: 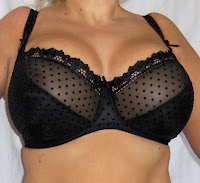 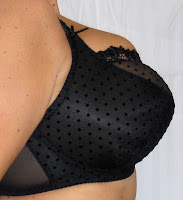 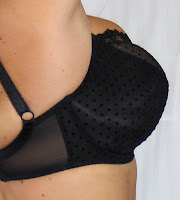 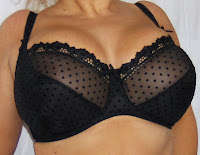 It was clearly too small in the cup but it was far less full-coverage than I had been expecting.  It gave me a very different shape from the side than the Emily (which made me rather ‘square’) but I was given hope by this one that perhaps a larger cup would do me very well indeed.


Although it was the ‘sister size’, I next tried the 32JJ in black: 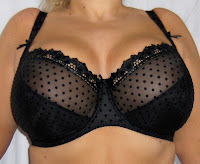 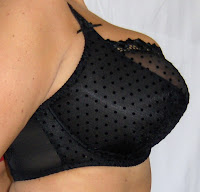 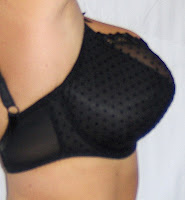 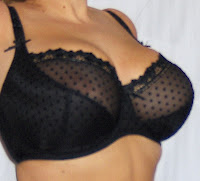 (I am sorry that some of these photos are rather blurred; I did not realise this was the case until I had already sent the bras back so it was too late to do anything about it.)


Interestingly, this fit much better in the cup, although it is still too small for me.  I think the 30 band was too stretched on me and it caused the cups to stretch wider, which gave a smaller fit in the cup. 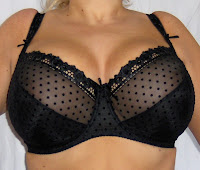 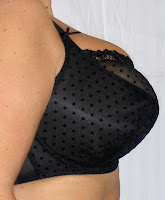 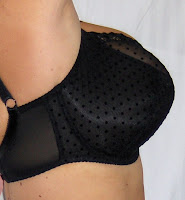 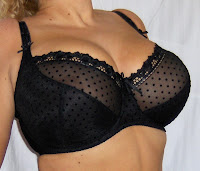 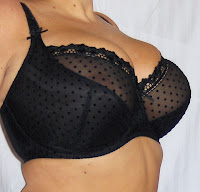 Again, this was too small in the cup.  Boo!  But I wondered if it was because the band was still a smidge tight on me and if a 34 would produce a better fit in the cup.  Unfortunately I cannot answer that question just yet as I will have to place another order to find out. 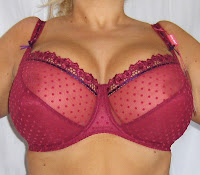 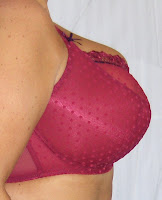 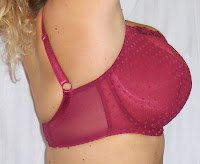 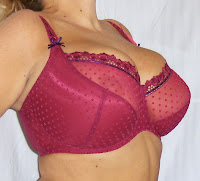 The eagle-eyed amongst you will notice that the contrasting bow is missing from the centre gore on this one – I’m not sure where it went but can only assume it fell off at some point during the manufacturing process.


This bra is such a pretty colour!  And I love the contrasting purple ribbon – it makes what could be rather a plain bra stand out and have a funky edge.  This size was clearly too small in the cup so it had to go back. 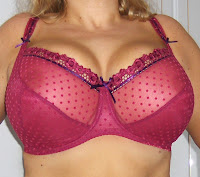 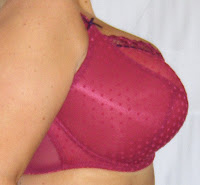 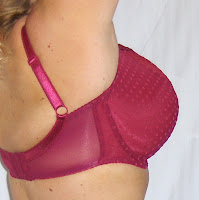 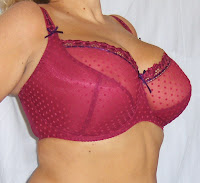 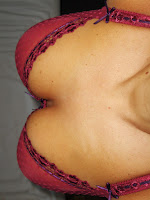 Interestingly, this was the best fit in the cup, even though it’s the same size as the black version.  I have read before that black fabric always comes up slightly smaller than other colours so it’s always worth trying on something other than black if you can (this is true for all clothing, not just lingerie).  Sadly this was still giving me a noticeable quadraboob so it’s not a keeper in this size.


I noticed that the 32K in wine was starting to pull my breasts downwards somewhat so I would be very interested to see if the 34 bands did the same thing.  I like my bras to give my breasts uplift and a rounded, perky shape, and I am not sure this will, even in a larger band.  It may simply not be the right shape for me – but if not, I am sure I will be able to find something I love from Curvy Kate’s extensive range of stunning bra designs.


As with the Emily, I found the cups on the Princess were wider than those I’ve become accustomed to with my Ewa Michalak bras.  I do hope this is not the case with all the styles as wide cups do not suit me at all, nor are they comfortable for me.


If you are a fan of a more full-coverage style bra with wider cups, I would highly recommend the Princess.  Don’t forget to try it in a few sizes and colours to make sure you get the fit just right 🙂