In my bid to find a Curvy Kate style that suits me, I have already tried the Princess and the Emily, as well as the Showgirls (Tease Me, Tempt Me, Thrill Me).


The last Curvy Kate style I tried was the Portia: 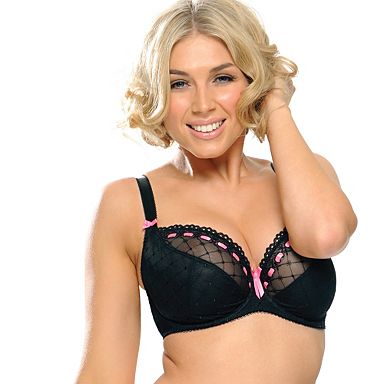 The promo pictures reminded me somehow of the Freya Arabella – a style which has been discontinued but was nonetheless very popular.  I once tried the Arabella but did not get on with the shape as it cut into my boobs, giving me the all to familiar quadraboob look.  I also felt it didn’t give me good uplift, but then again I was wearing too big a band and too small a cup!


The Portia turned out to be rather different from this.  It’s a very beautiful bra – the contrasting pink ribbon along the tops of the cups and the pink bows on the centre gore and section where the straps meet the cups are very eye-catching.  These touches bring to life what could otherwise have been a rather straightforward and unexciting bra.


The cups are made from a lovely criss-cross embroidered mesh and are double lined for extra support.  The centre gore lies flat but the cups are too wide – I suspect some of this is caused by the band being too tight for me and pulling the cups wider than they really are.  This also makes them shallower, which is another thing that does not suit my breasts.


The straps are fully adjustable and the band is stretchier than average.  I say that because I could only get hold of the Portia from Debenhams in a 30 band and it wasn’t overly tight on me.


The first Portia I tried was the 30JJ: 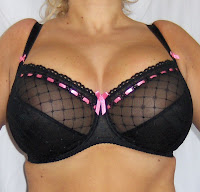 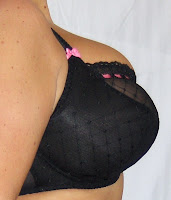 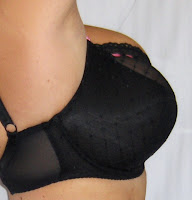 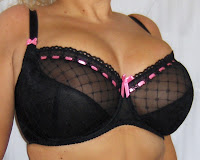 As with so many of the bras that are too small for me, I loved the shape this gave me from the front but the view from the side was laughable.  My double-boob was almost half as big as the boob within the cup!  I liked the fact this bra seemed to curve across the breast, rather than having a diagonal shape from centre gore to strap, but it remains to be seen if this is true for larger band/cup sizes. 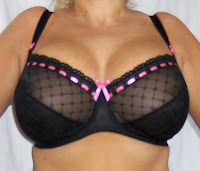 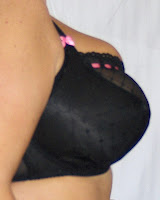 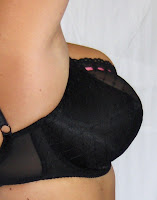 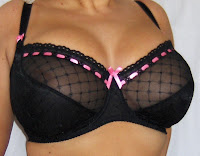 Clearly this was also too small in the cup but I was definitely moving in the right direction. I think I would have to go to a 34 band for this in order to get a better fit in the cup – the 32K would only be the equivalent of one cup size larger than this and I just don’t think it would be enough.  However, the 34 band may prove to be too loose in the band.  Time will tell!


This has to be my favourite Curvy Kate style so far (apart from the Showgirls).  The shape is great, both along the tops of the cups and the side profile.  My breasts, although squashed into a small cup, look supported and uplifted and are given a nice rounded shape. However, again I found the wires were too wide for me and although they did not cut in they simply did not suit me.


I would highly recommend this bra to anyone who likes the wider wires of Panache and Cleo.