The first order I placed with Ewa Michalak back in July was for a mixture of 36/80H and HH bras as that’s what I wore at the time in Freya Millies and Eleanors – although I probably should have sized up at that point as the Freya Hs had been too small for a while and the HHs weren’t doing the job either.

However, I found the EM H cups definitely too small and the HHs still a little on the snug side.  I therefore returned them all and reordered 36/80Js in the styles available.  This was when I found out that not all EM styles are available in all sizes and it’s only the PLs (plunges) that are sold in the larger cup sizes.  At first this was not an issue as I was completely beside myself with excitement to know that soon I would be in receipt of some stunning padded foam plunge bras which gave me the most beautiful shape and uplift.  However I have always mourned the loss of the HP Czarny which sadly did not go above a 36/80H 🙁 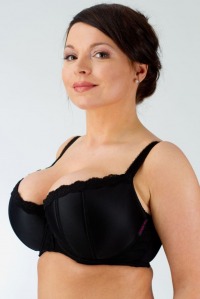 
The worst thing is it’s now available in very few sizes (I guess they are running down the stock) so I can’t even reorder it and pretend it fits!

Over time, as I have reported in previous posts, I have found that some of my 36/80J plunge styles have stretched slightly with wearing and handwashing.  I therefore decided that the next time I ordered I would go for 36/80HH again.  After all, it’s better to have bras that are slightly too small than slightly too big.

So, a couple of weeks ago, I was delighted to take delivery of a lovely brown box which contained the most gorgeous jewels from Poland 😉  I had ordered several new styles, but the one I was most excited about was the PL Onyks. 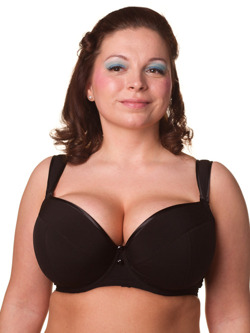 
In my very first order I had tried the CH Onyks but was broken-hearted as it was definitely too small.  I hadn’t realised at that point that I would not be able to reorder it in a larger size as again this is a style which stops at a 36/80H.  Incidentally, I emailed Ewa about this and she replied saying that certain sizes simply don’t work or look good in much larger cups.  I absolutely take her word on this but wonder if the CH Onyks might be an exception to this rule.  Despite it being too small, it gave me incredible support and I find it hard to believe that this wouldn’t be the case in a size or two larger in the cups.  But of course Ewa is the expert and not me and I was delighted when a little while ago I saw she was offering the Onyks in a plunge which went up to a 36/80KK!  And the word on the street is that this plunge style is also coming soon in WHITE <3

Here I am in the 36/80HH PL Onyks and matching briefs: 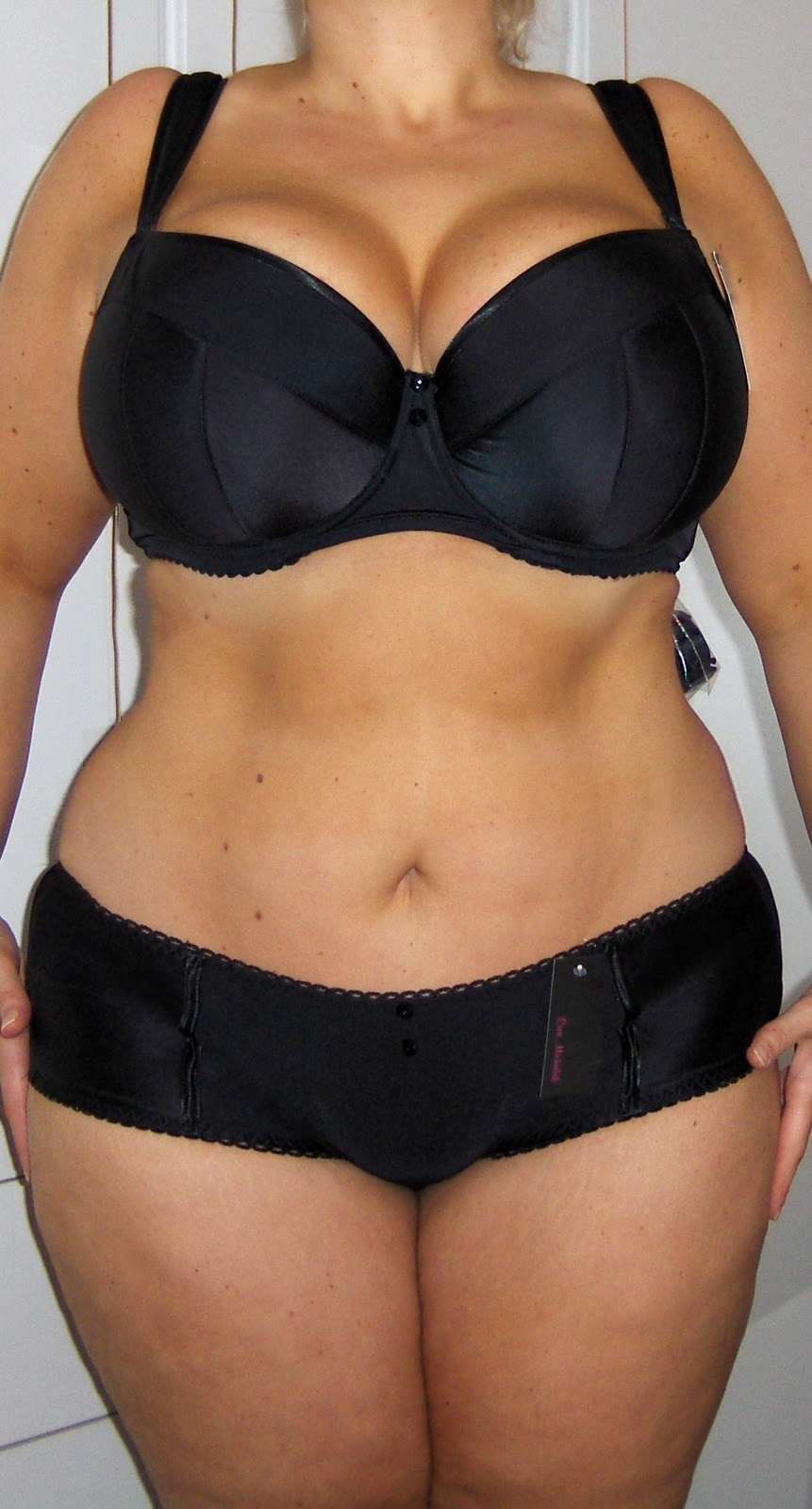 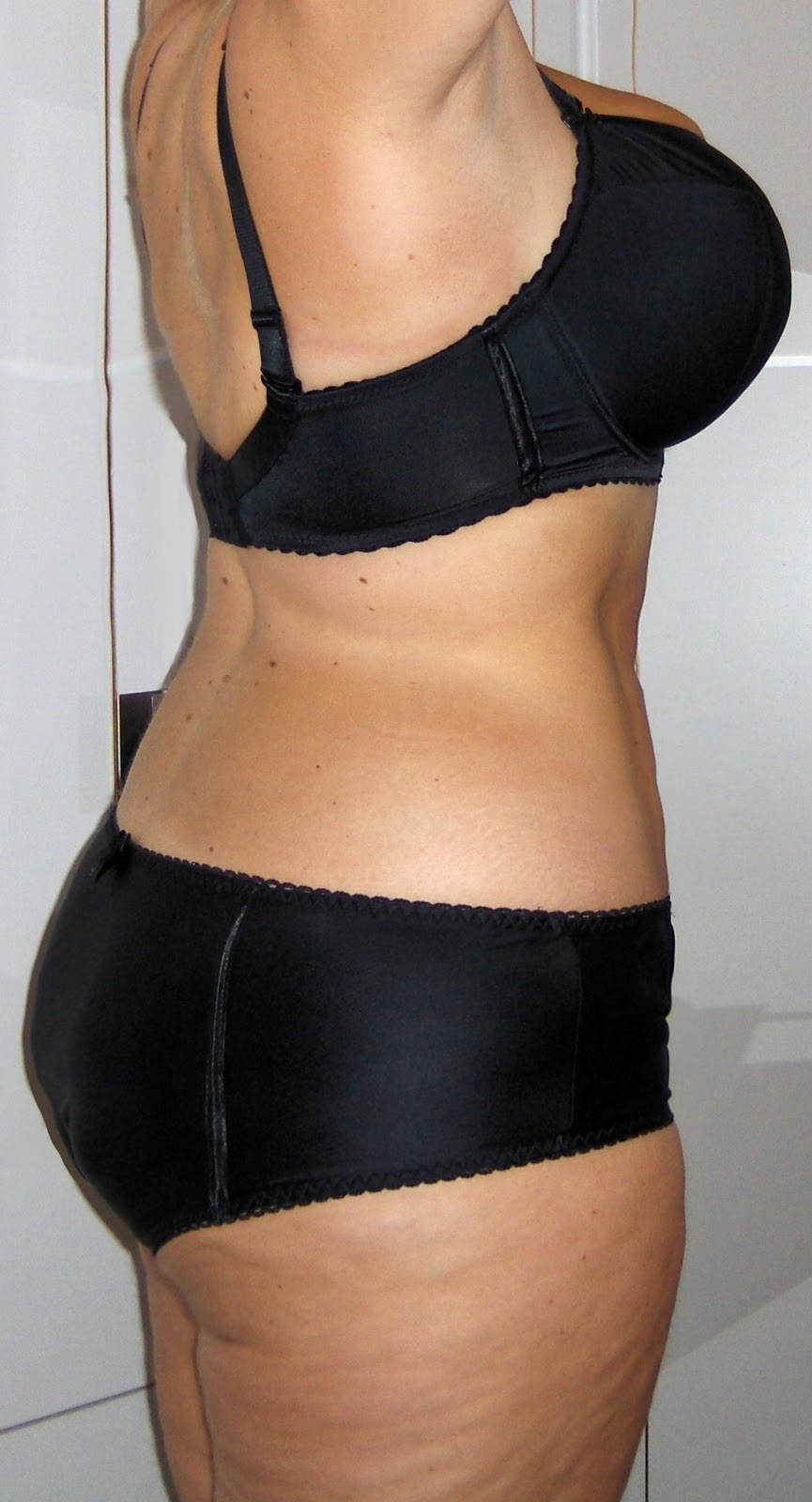 And here is the bra with the matching thong: 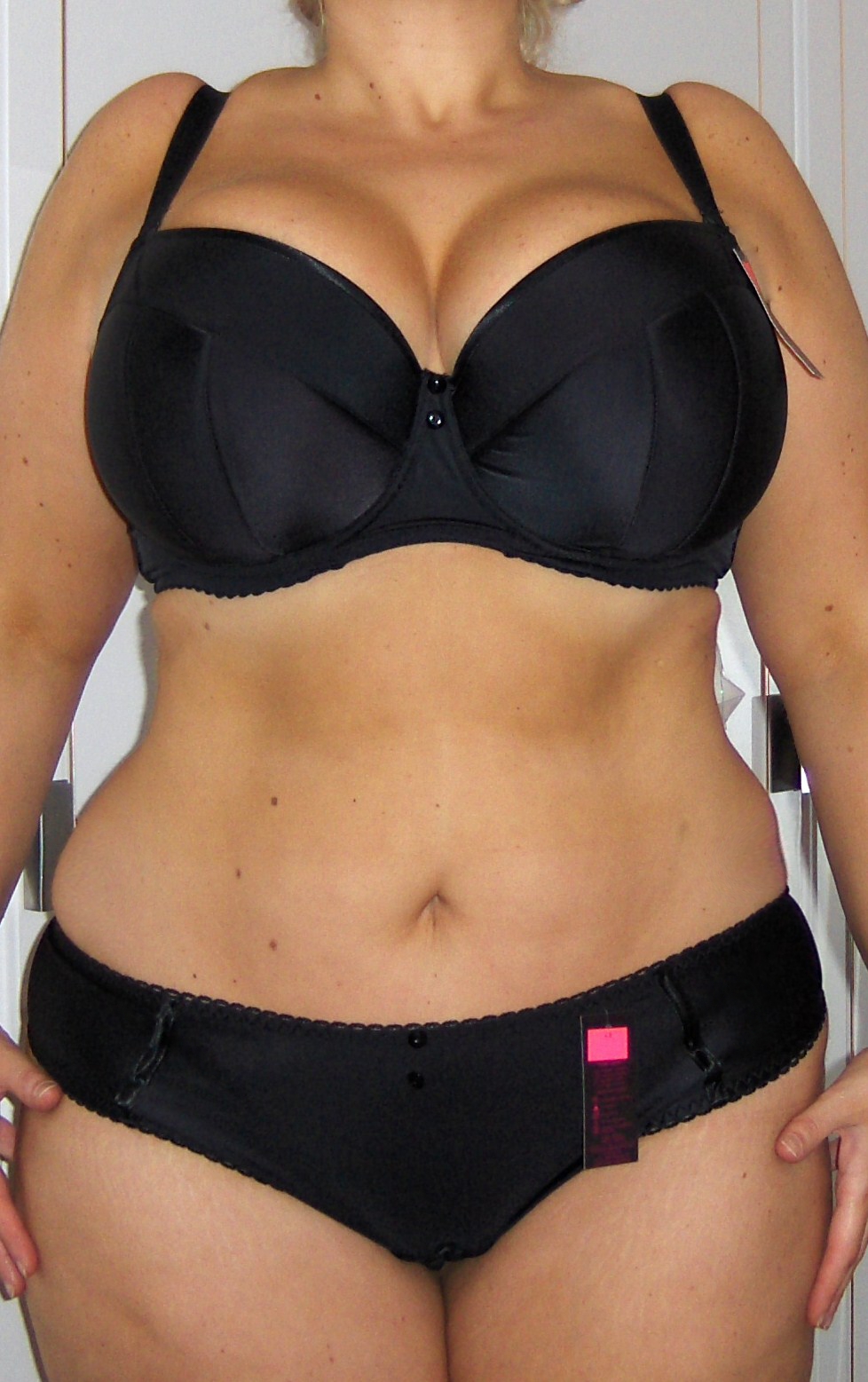 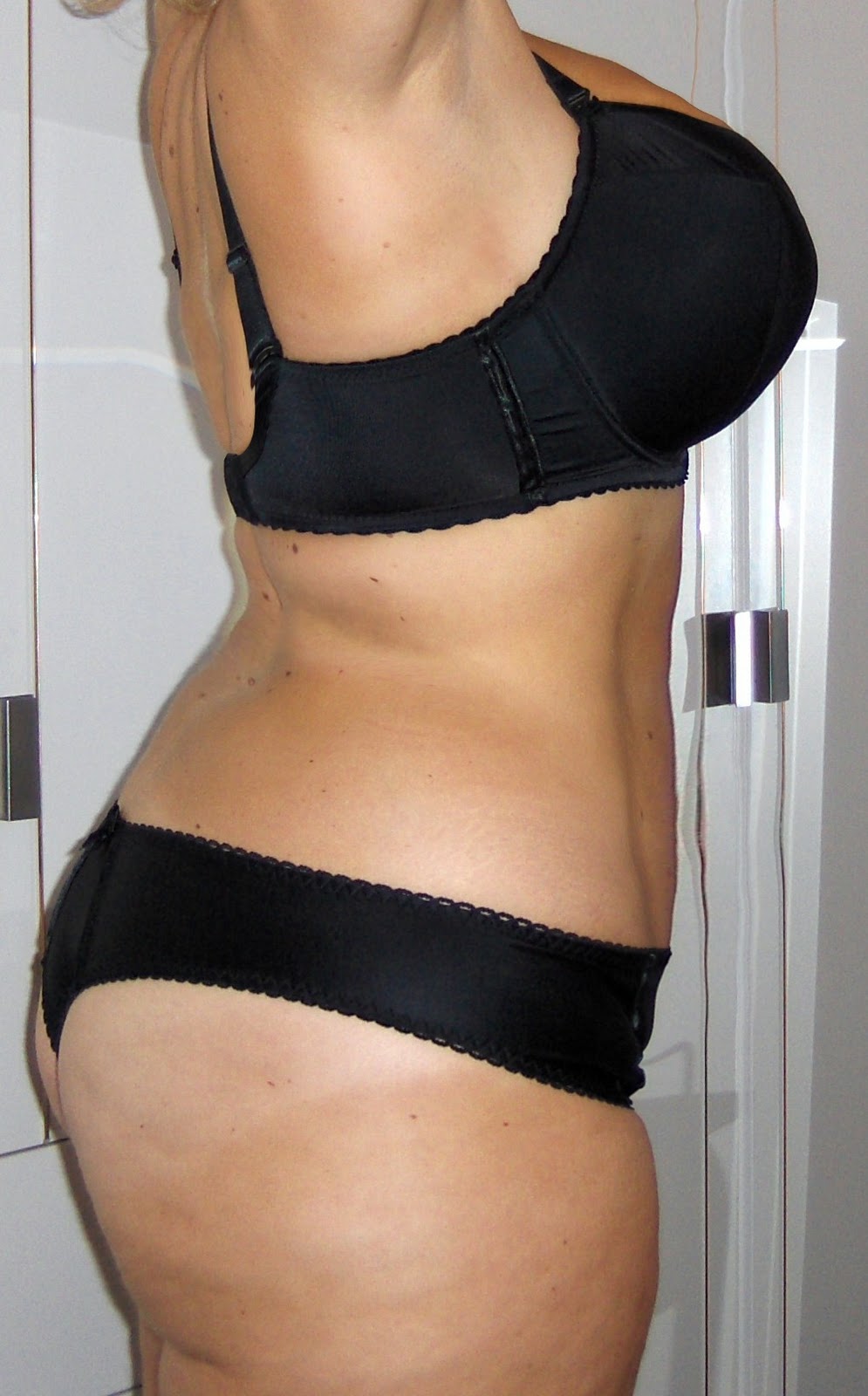 So, I am sure you will notice straight away the difference between this and the 36/80J EM bras I have previously reviewed.  My boobs look far more pushed up in this bra and, although I think they looked good in the larger size bras, I am completely convinced that I have done the right thing by sizing down in the cups.  I get a teeny bit of overspill from time to time but I can quickly adjust this and if these bras are anything like my other EMs they will soon stretch a little and therefore fit much better 🙂

It’s been a while since I tried the CH Onyks but if memory serves then this is a very good alternative.  The bra is another one made from padded foam cups with a silky soft fabric overlay.  It has two cute little buttons on the central gore and looks very elegant and stylish.

Inside the cups, the bra has removable pads.  These are intended to correct asymmetry but can also act as a bit of an extra push-up effect (somewhat similar to the Gossard Wonderbra).  If you don’t want this effect you can remove the pads – simple!  Don’t get me wrong, the effect is not excessive but I do notice the difference between this and my other 36/80HH bras.

Being a multiway bra, the PL Onyks comes with two sets of straps – one regular fully adjustable pair (shown in second pics above) and one pair of wide ‘comfort’ straps (shown in the first pics above) which are only adjustable by a couple of inches.  The latter really were true to their word – sooooo comfy!  My only gripe regarding straps is that it didn’t come with a halterneck strap, as I have been looking for a bra which has the halterneck option for many years.  I am sure it’s easy enough to buy such a strap on the high street or internet but it would have been nice if it had been included as part of the deal.  Ewa Michalak sells interchangeable straps on the website but I would have to buy all three sets of straps in order to get the one halterneck I wanted…seems excessive but if that’s what it takes, that’s what I’ll do!

Speaking of straps, I had a small issue with this bra.  It came with the comfort straps already attached and I was pleased to try these out.  Me being me, I wanted to swap them for the regular straps to see how I got on with them…but this is where I encountered the problem. 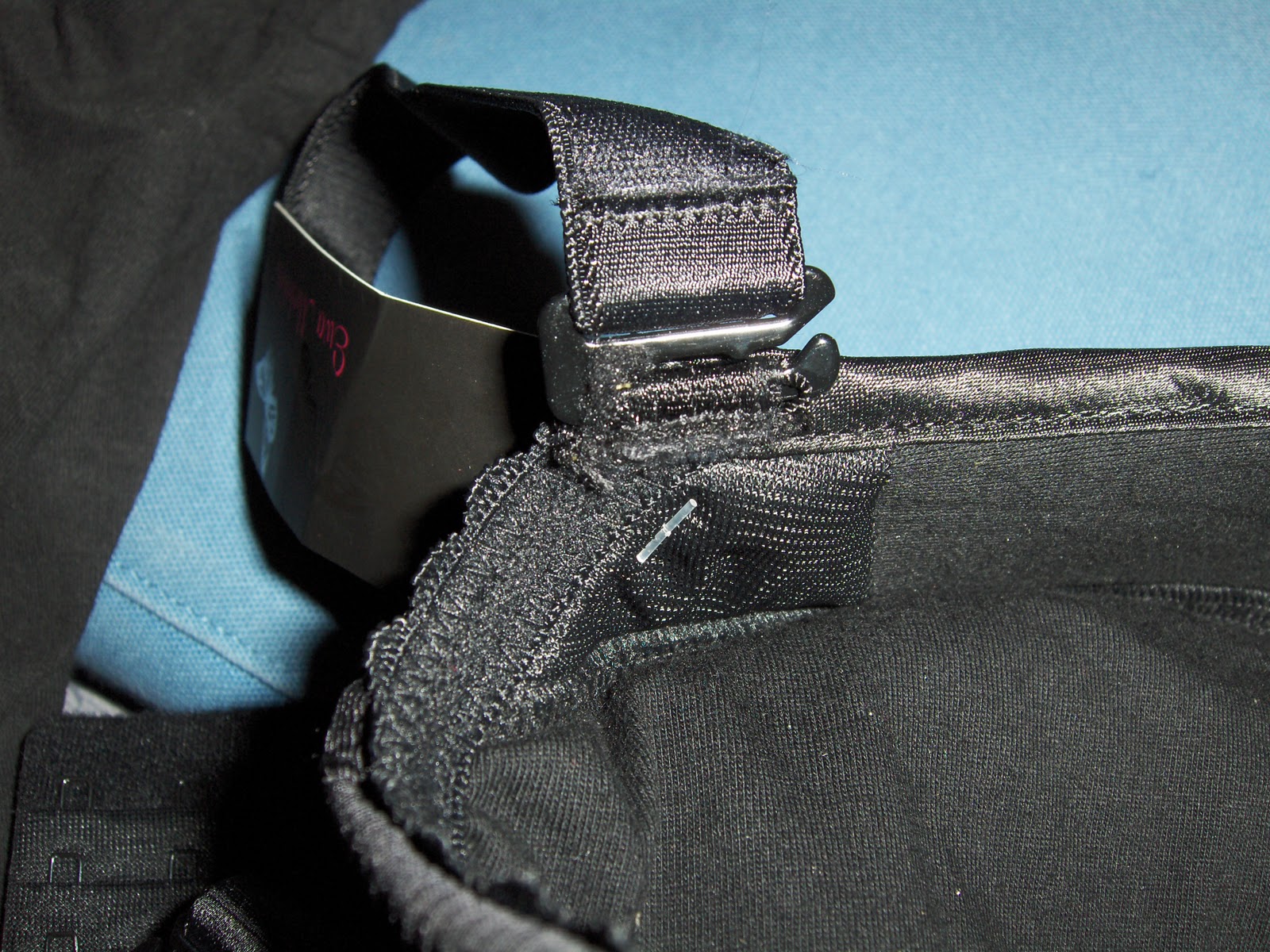 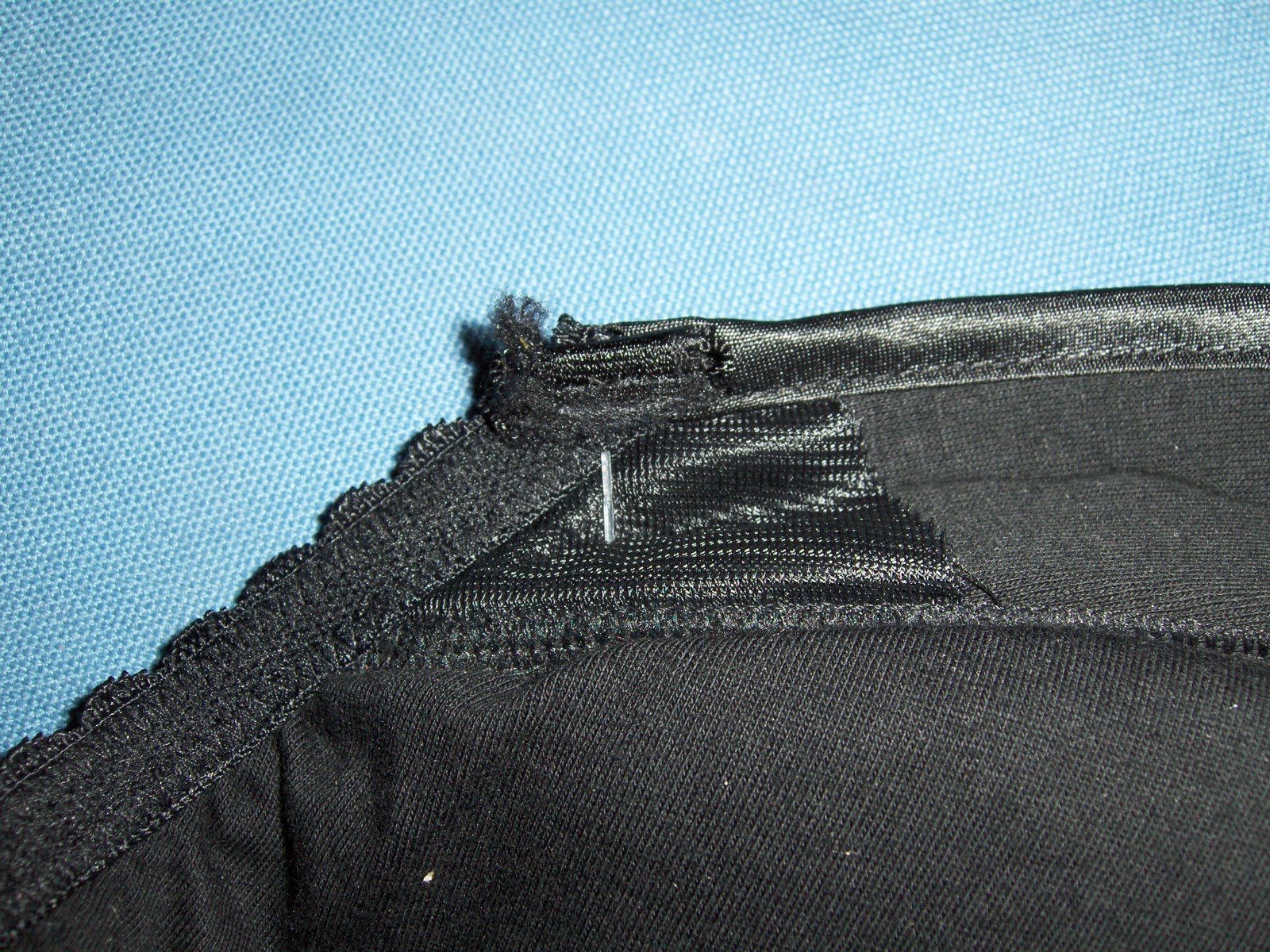 There was a fault with one of the loops to which the bra strap hooks attach.  The material was fraying when I first tried the bra on, but when I tried swapping the straps over I found it almost impossible to push the hooks through because the loops had been sewn so that they were extremely narrow.  I guess it meant that it would be extremely unlikely for the straps to ping off (always a worry with multiway bras!) but it was also therefore extremely unlikely that I would be swapping the straps very often as it was so hard to do.

I emailed Ewa with photos asking what she thought and if I could keep the bra (as I was dying to wear it!) and see if the problem got any worse.  She replied very quickly saying the bra was faulty and I should return it.  As an apology she has very graciously given me free international postage on my next order – superb!  She will also send me a replacement bra.

My intention in mentioning this manufacturing fault is not to highlight a problem – we are all human and mistakes occasionally happen – but instead to share my experiences of Ewa Michalak’s customer service.  I have already raved many times about how fantastic her products are and so when I sent my initial email to report the issue I wondered if her problem-solving would be just as good.  I needn’t have wondered.  Ewa replied very promptly and without hesitation or question she asked me to return the bra and told me what she would do to make up for my inconvenience.  Perfect.  I usually judge a company on how it treats its customers in a crisis rather than on a day-to-day basis and Ewa Michalak has scored 10/10 on both counts.  Well done Ewa – first class lingerie and first class customer service 🙂

So a while back I returned the faulty 36/80HH and after some thought I decided to go for a 34/75J instead as the band in the 36/80 had seemed a bit big.  However I think it got lost in the system somehow as I didn’t receive my replacement for a couple of months! After a bit of to-ing and fro-ing I eventually received my 34/75J bra: 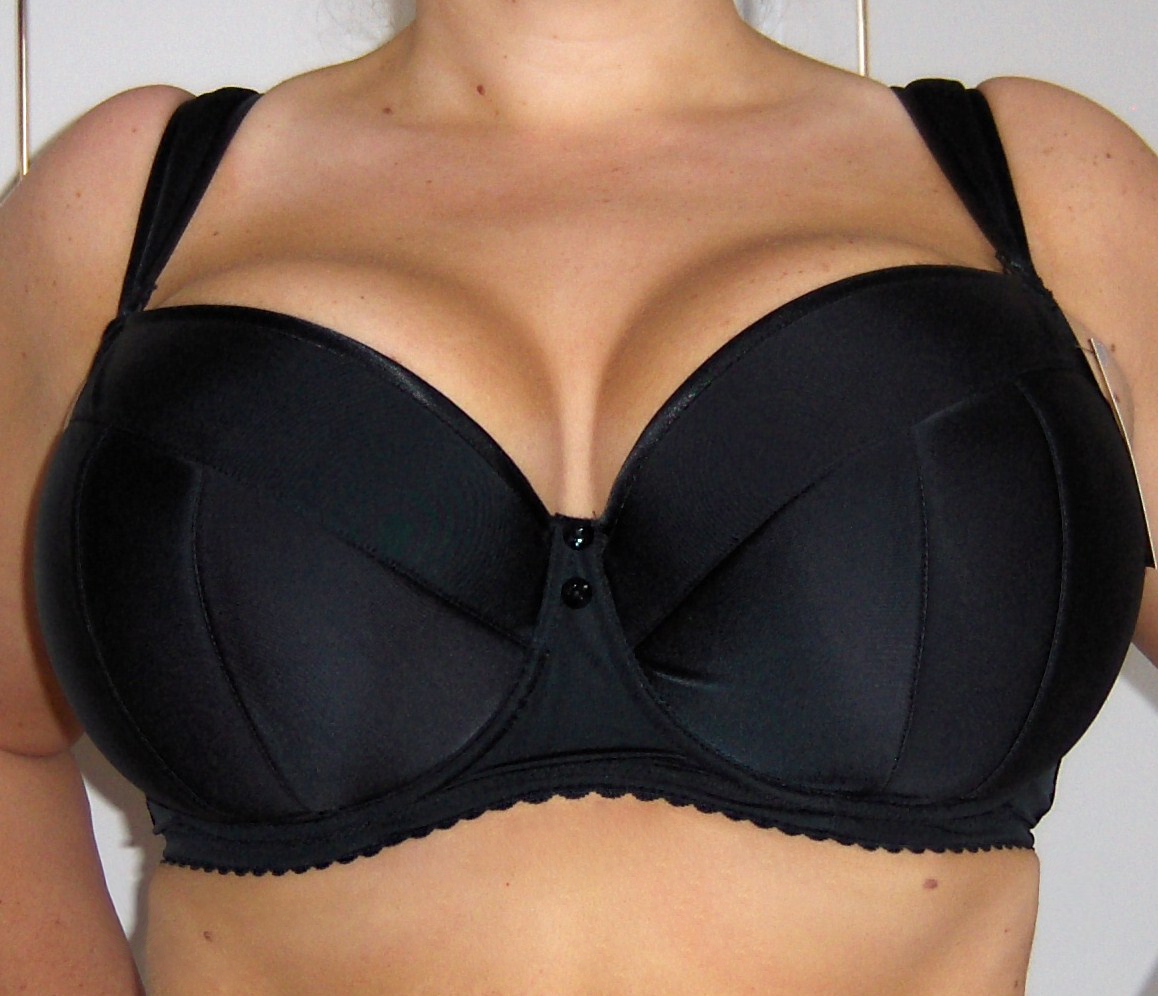 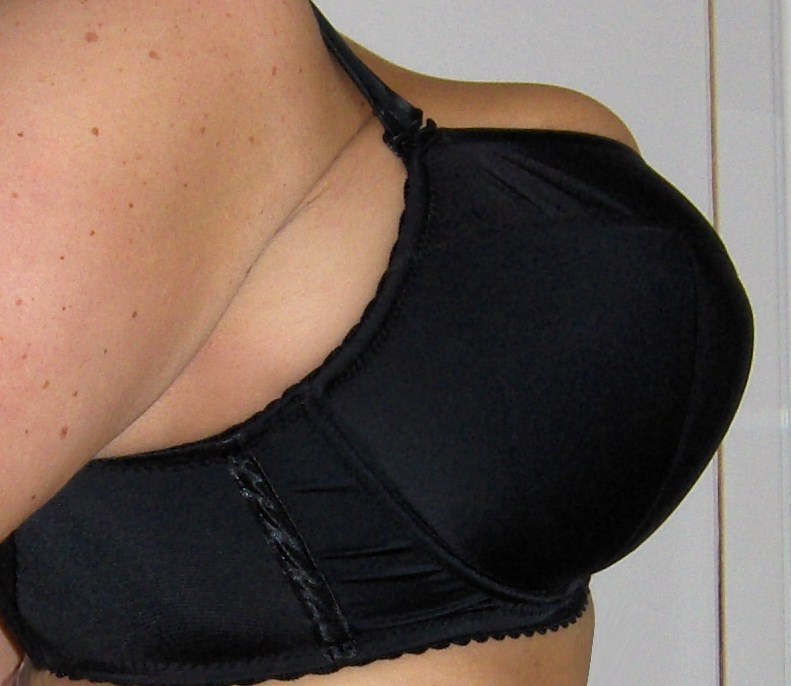 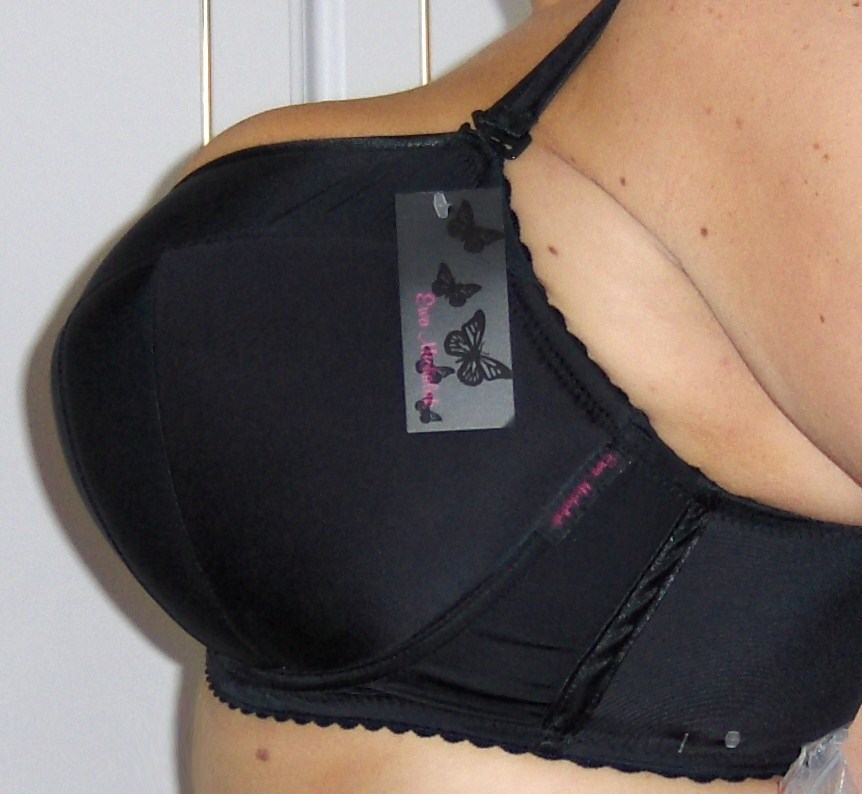 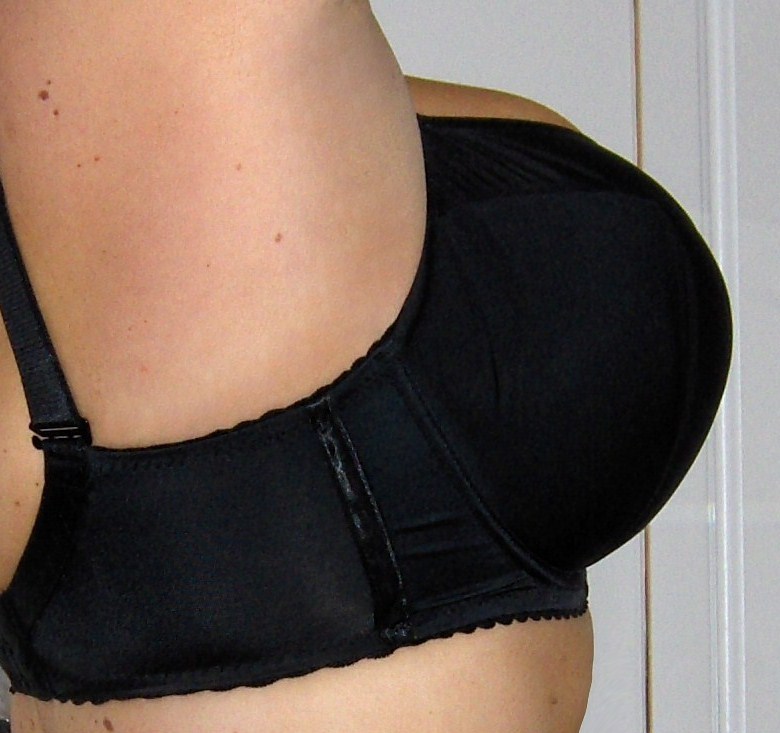 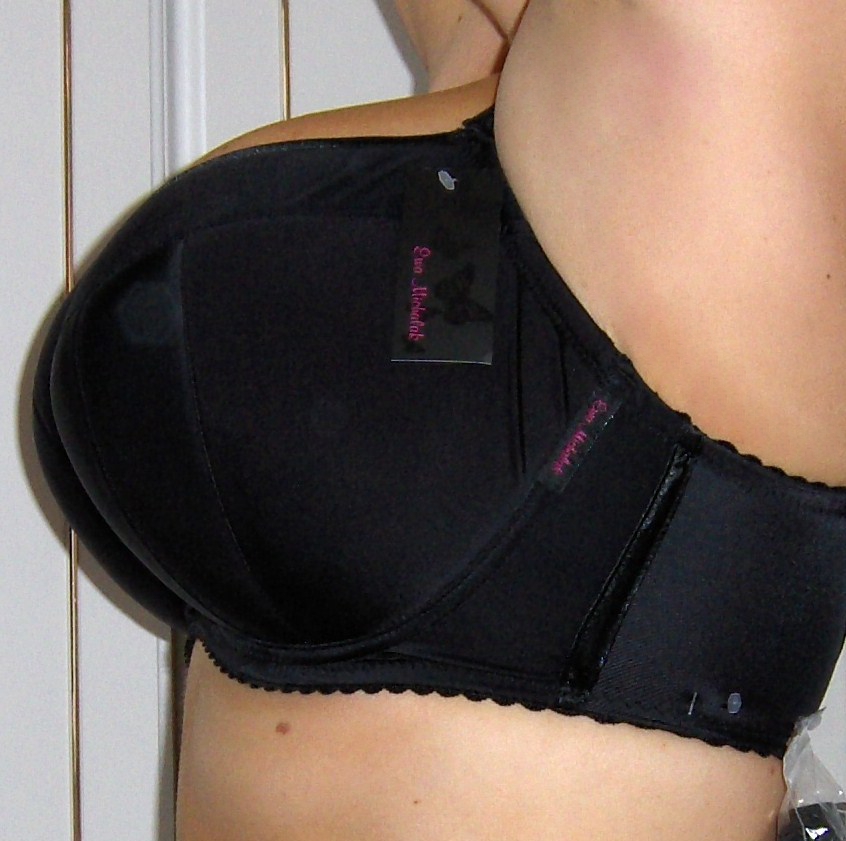 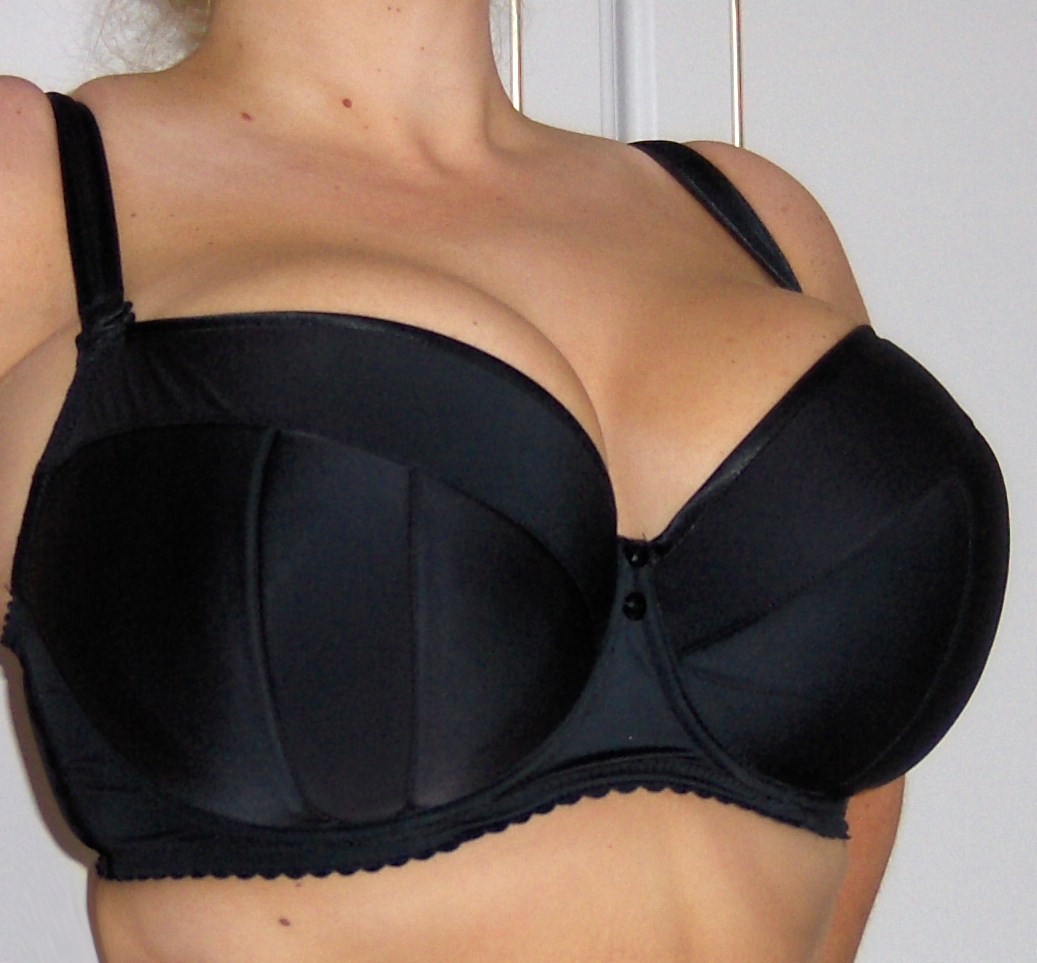 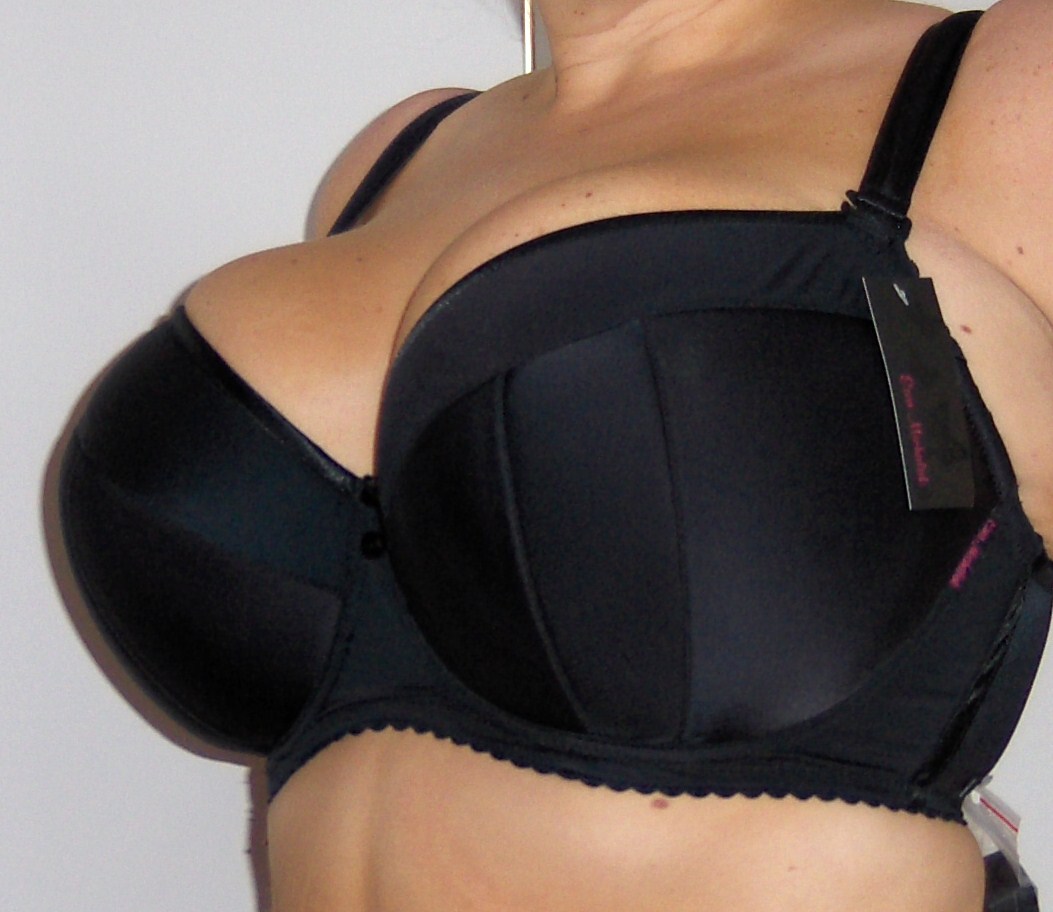 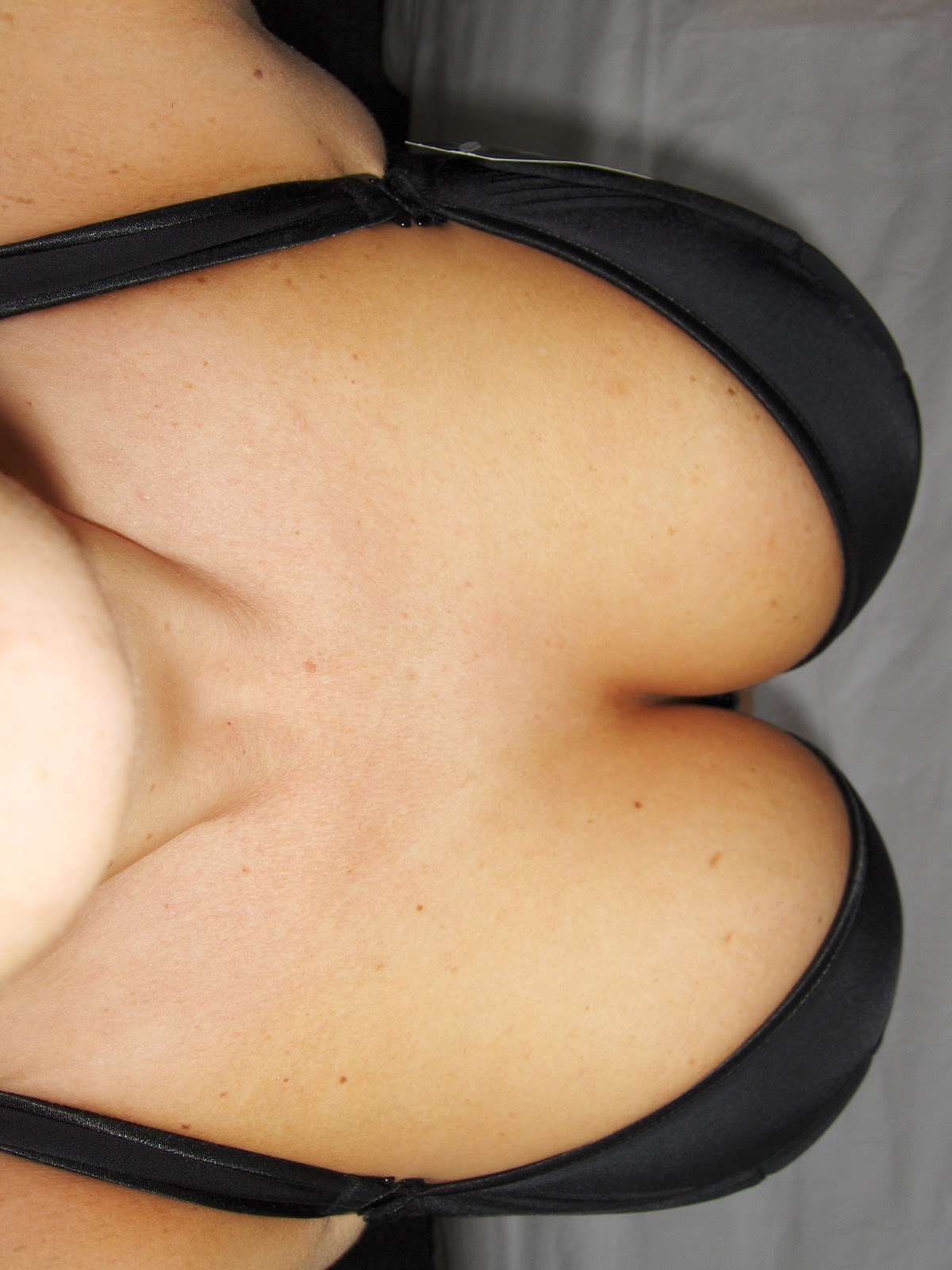 Lovely, but much too small. I packed it up and sent it back to Poland in exchange for a 70K.  What a difference! 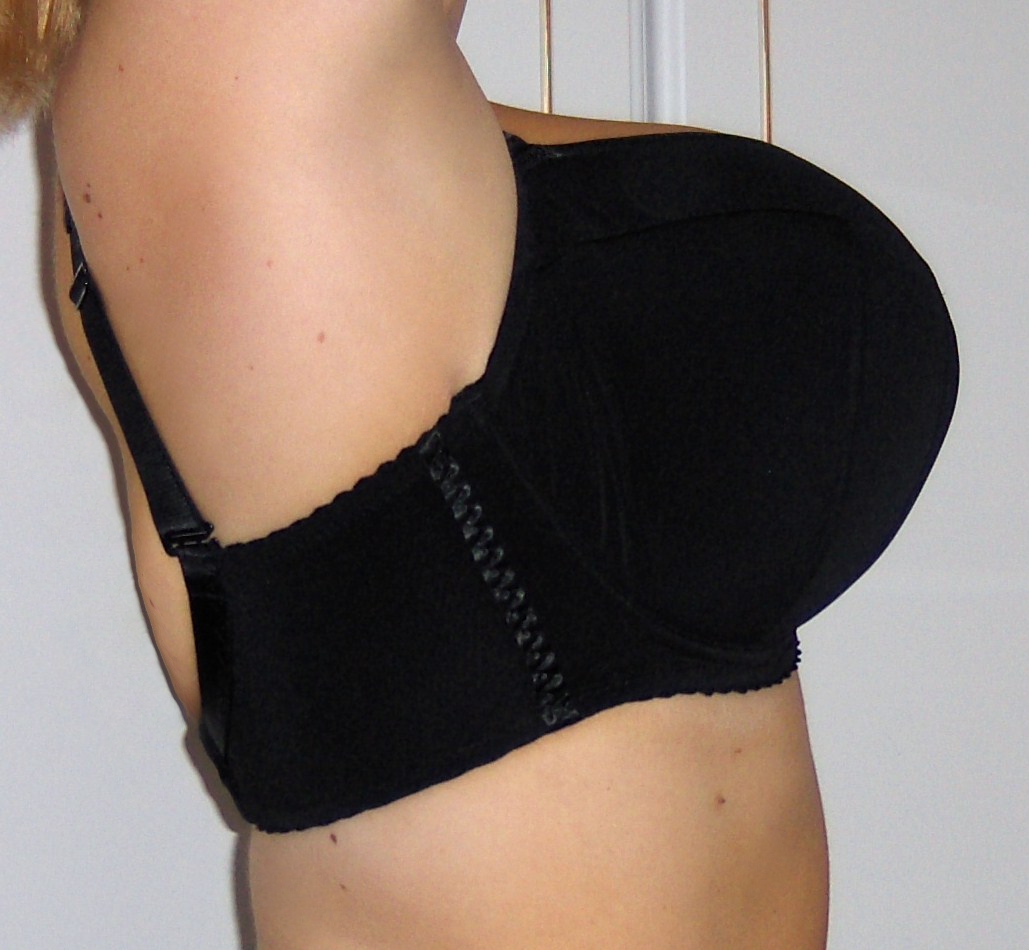 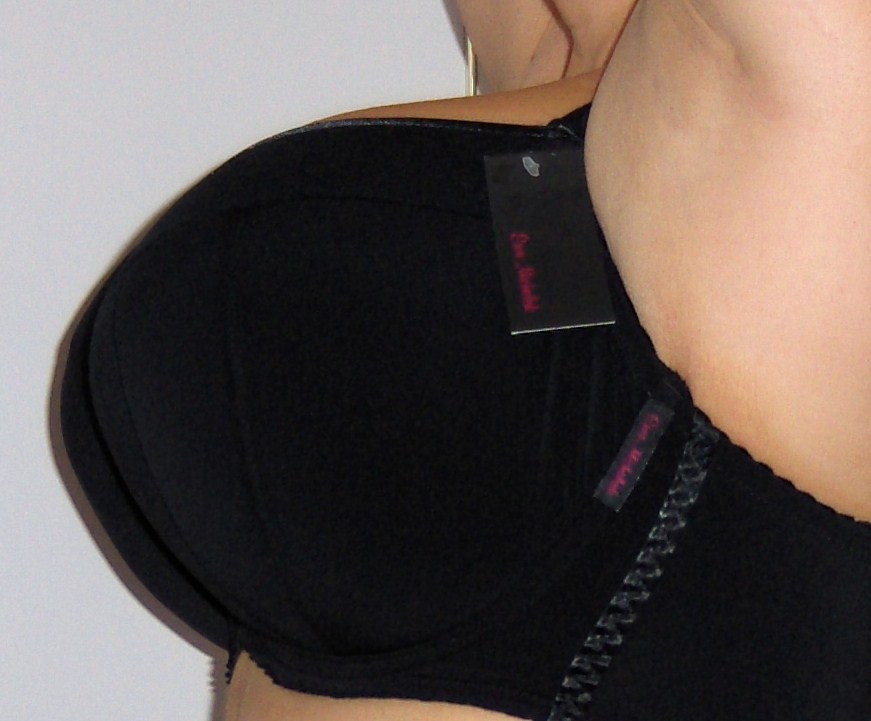 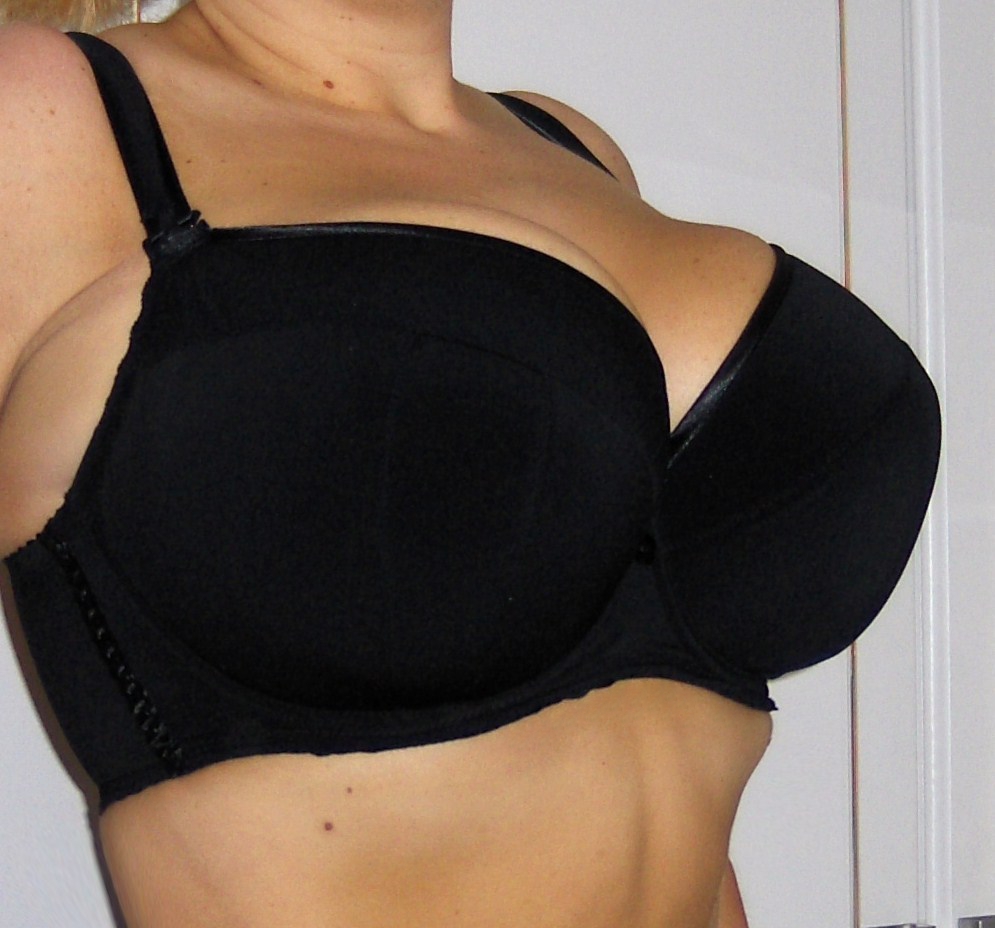 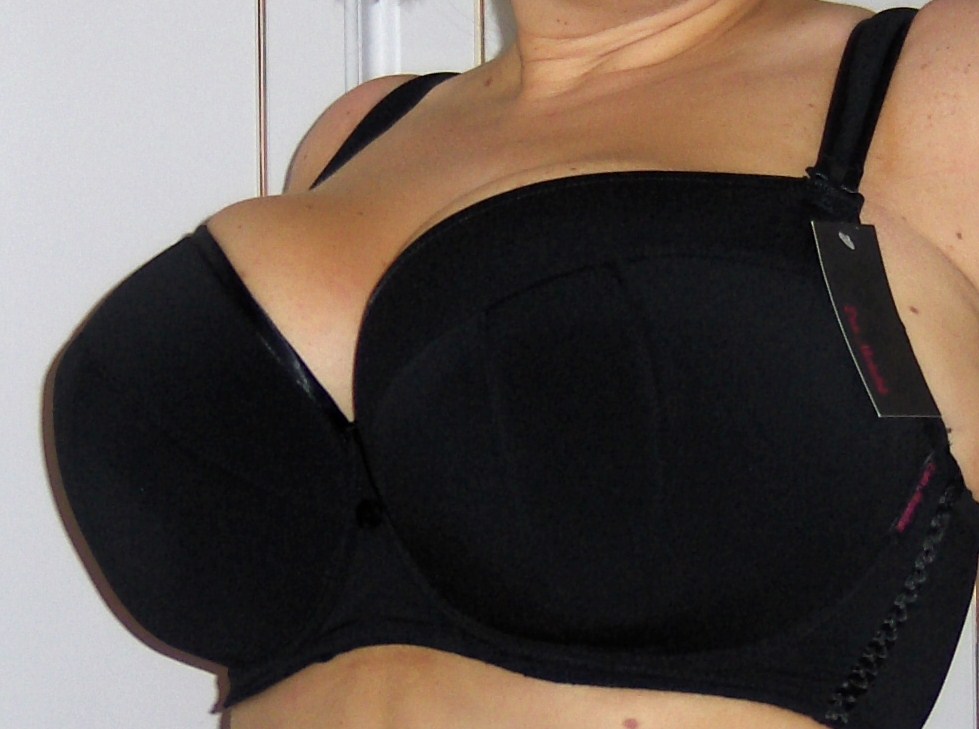 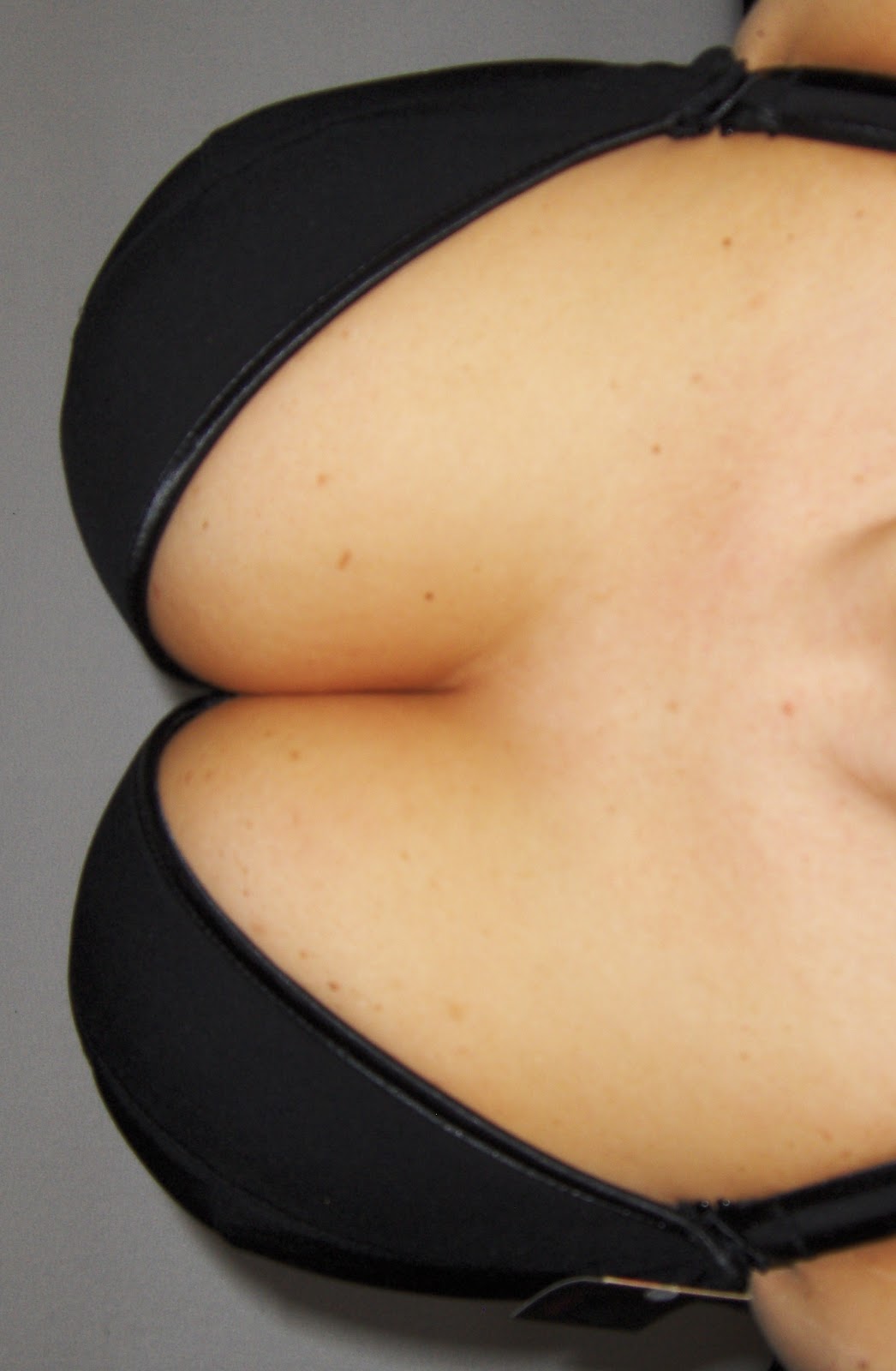 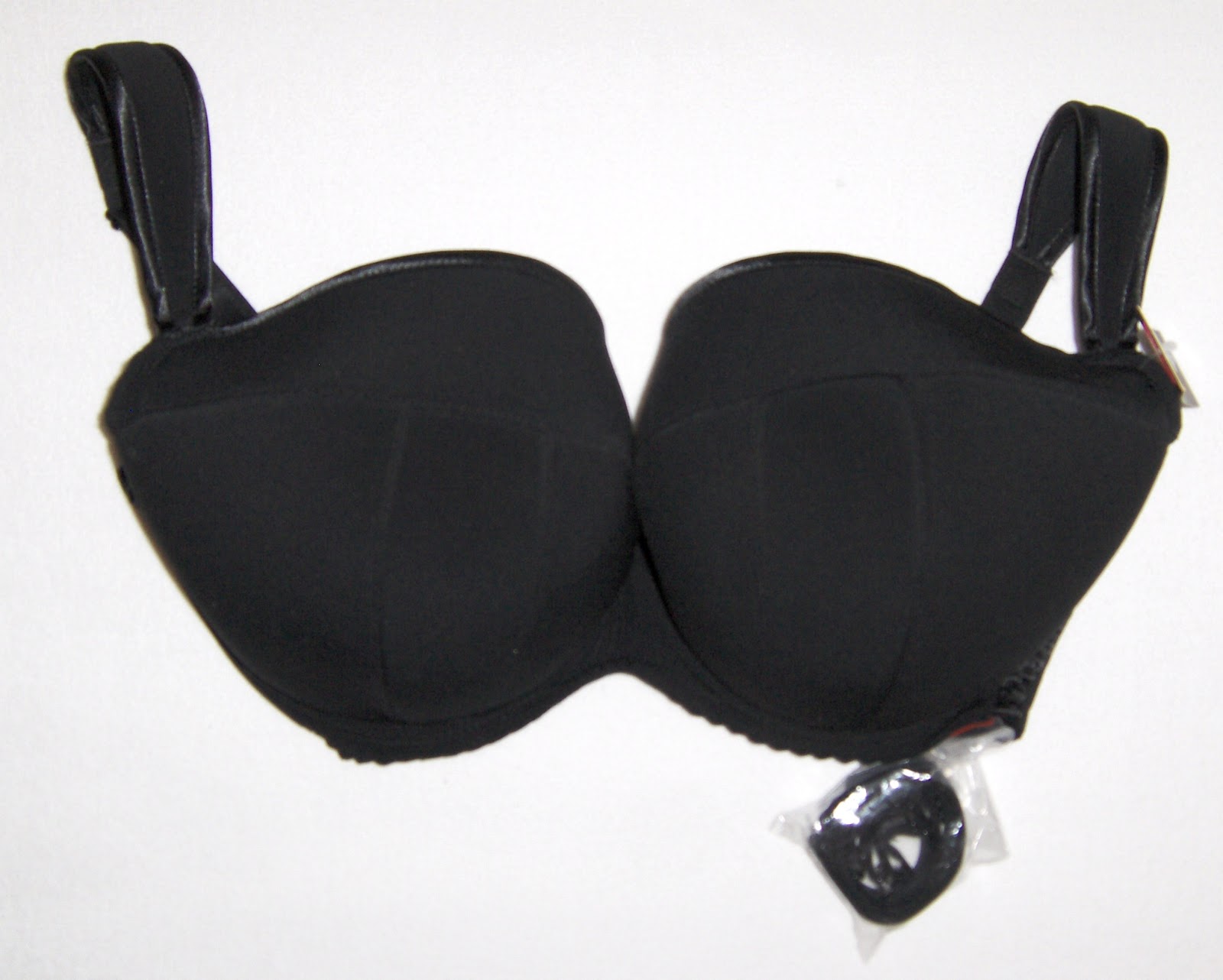 This is so much better for me!  However, I wonder if I should have gone for a 65KK as the band on this one is really stretchy – something I’d not found so much with the previous two I’d tried (more that they were too big).  So my advice if you’re in between sizes and thinking of ordering a PL Onyks is to go for your smaller band size.

The pics here show me with the removable pads in place – I love that extra bit of uplift! I have worn this bra heaps and it has retained its shape and support very well.

This bra comes very highly recommended by me.