One of my friends recently made the mistake of telling me there was a 15% off deal at Debenhams online.  I LOVE a bargain so of course I immediately scurried off and placed a huge order (whoops).

One of the many things I ordered was shapewear.  On a day-to-day basis I wear Matalan shapewear tights or their high-waisted shorts.  However I sometimes find that these items roll down when worn over an extended period of time so I have been keeping an eye out for something similar but with over-arm straps to stop the roll-down.

A couple of weeks ago I made the mistake of buying a bodyshaper from Matalan, assuming the fit would be as good for me as their tights and shorts.  Unfortunately it was an epic fail.  I bought the XL (which is what I wear in the shorts) and could not even get it over my hips. Matalan’s policy is that all shapewear is non-returnable but I might try taking this back anyway as it’s completely unwearable.  Interestingly I note that they’ve removed it from their website – I wonder if anyone else made a complaint about it…?

First up for review from my Debenhams order is the Maidenform Flexees Weightless Power Body Shaper. 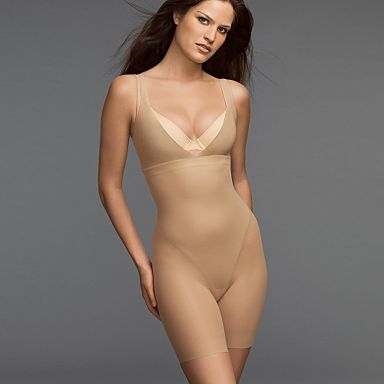 
I have wanted to try Maidenform after being told by several people that it’s the best.  This style wasn’t quite the one I was after – Maidenform do a different bodyshaper where the straps go completely up the sides of one’s bra – but I hoped that it would still do the trick.

It was easy to get on (I find shapewear differs enormously regarding the effort required to don it) and the material, although thin, felt strong and of good quality. 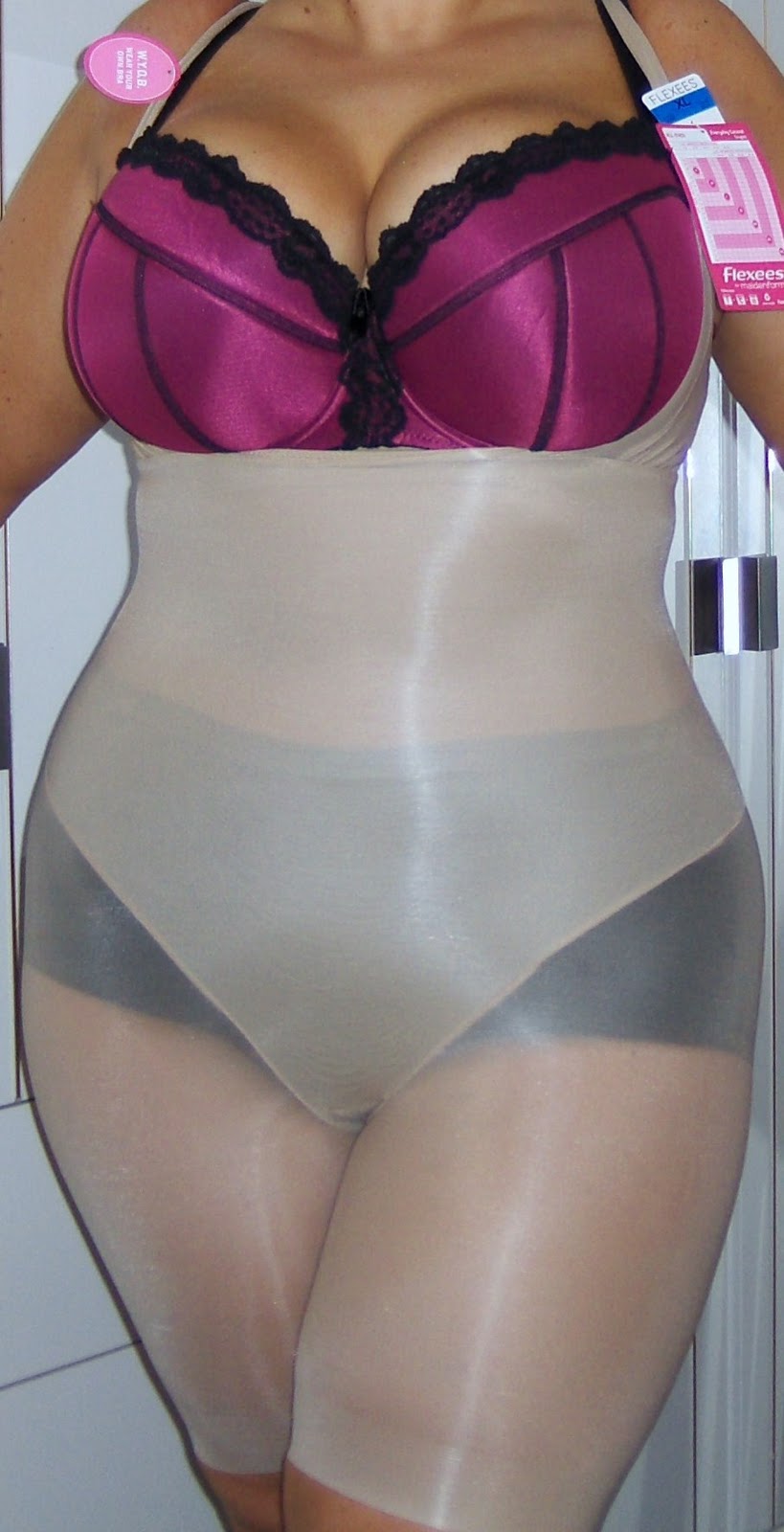 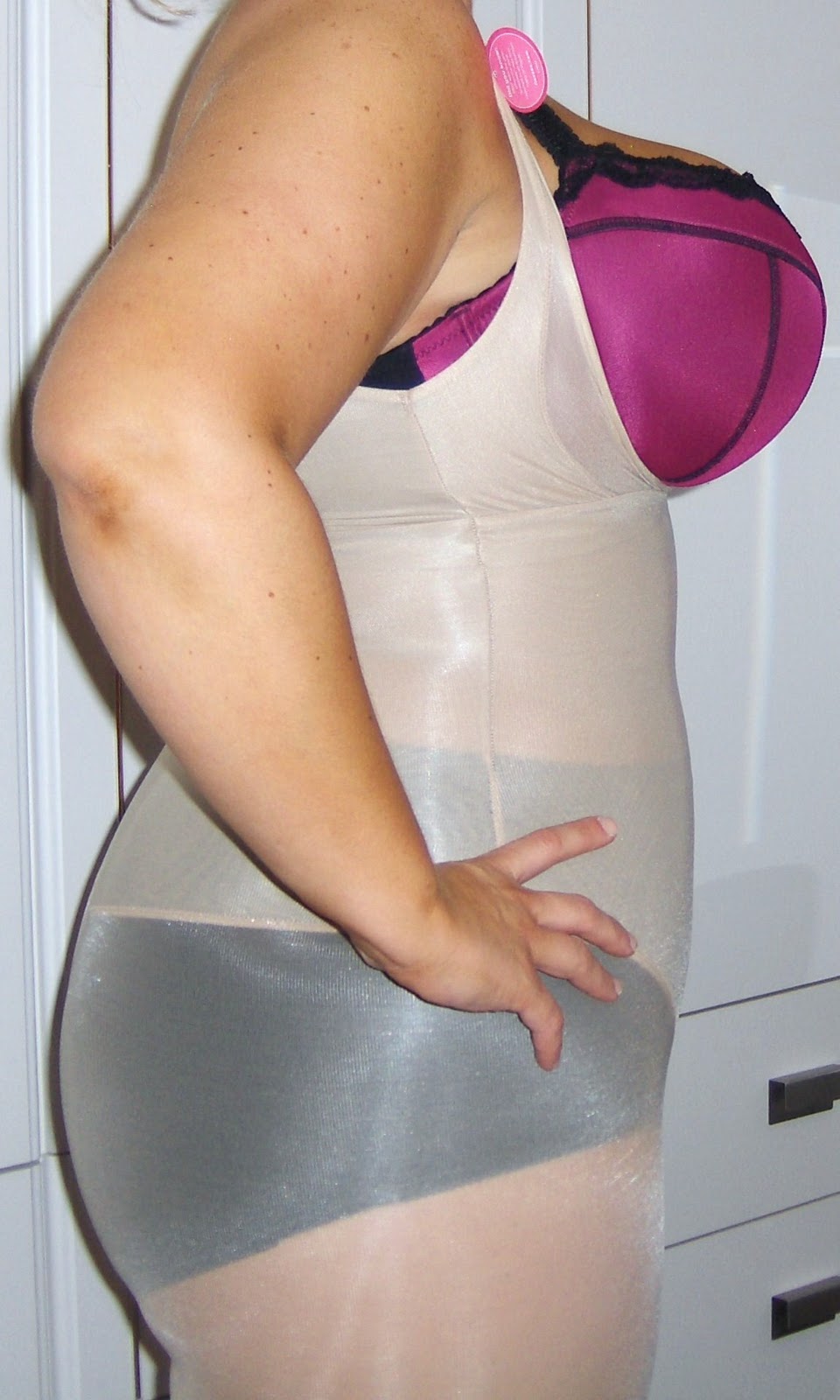 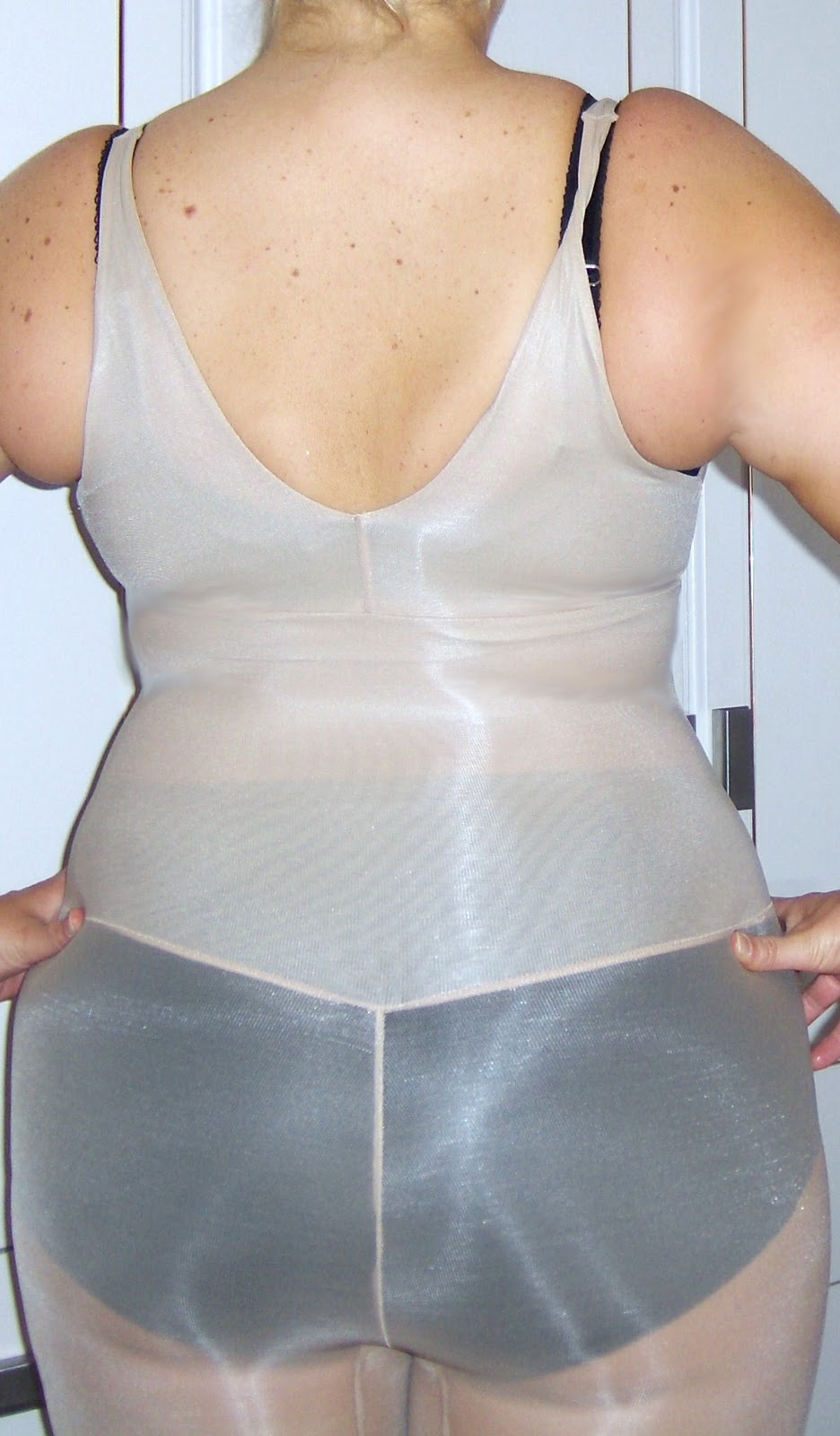 (I would not normally wear knickers underneath this but decided to do so for these photos for modesty reasons!)

I had to push the sides of the bodyshaper around my boobs as otherwise I got a terrible side quadraboob.  This gave me even better cleavage than normal, which was an added bonus!  There was an opening at the front gusset so there would be no need to get completely undressed when making a quick visit to the bathroom…provided you weren’t wearing knickers underneath, of course!

The bodyshaper smoothed me all over and I was fairly pleased with the result.  However, I didn’t feel that it made a huge difference to how I might look without a bodyshaper under clothes and the length of the legs was slightly shorter than I would have liked.

So, mind not yet quite made up, I moved on to the Debenhams Natural All In One Bodyshaper. 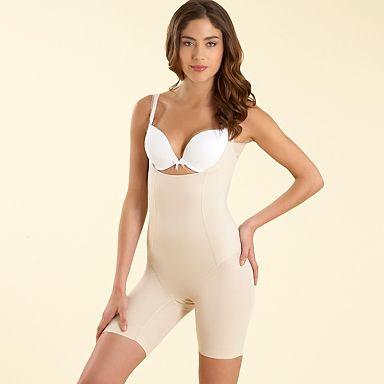 
The item description and customer reviews did not make it clear whether this bodyshaper had an opening at the gusset so I had ordered it hoping there would be one.  Fortunately, there was 🙂 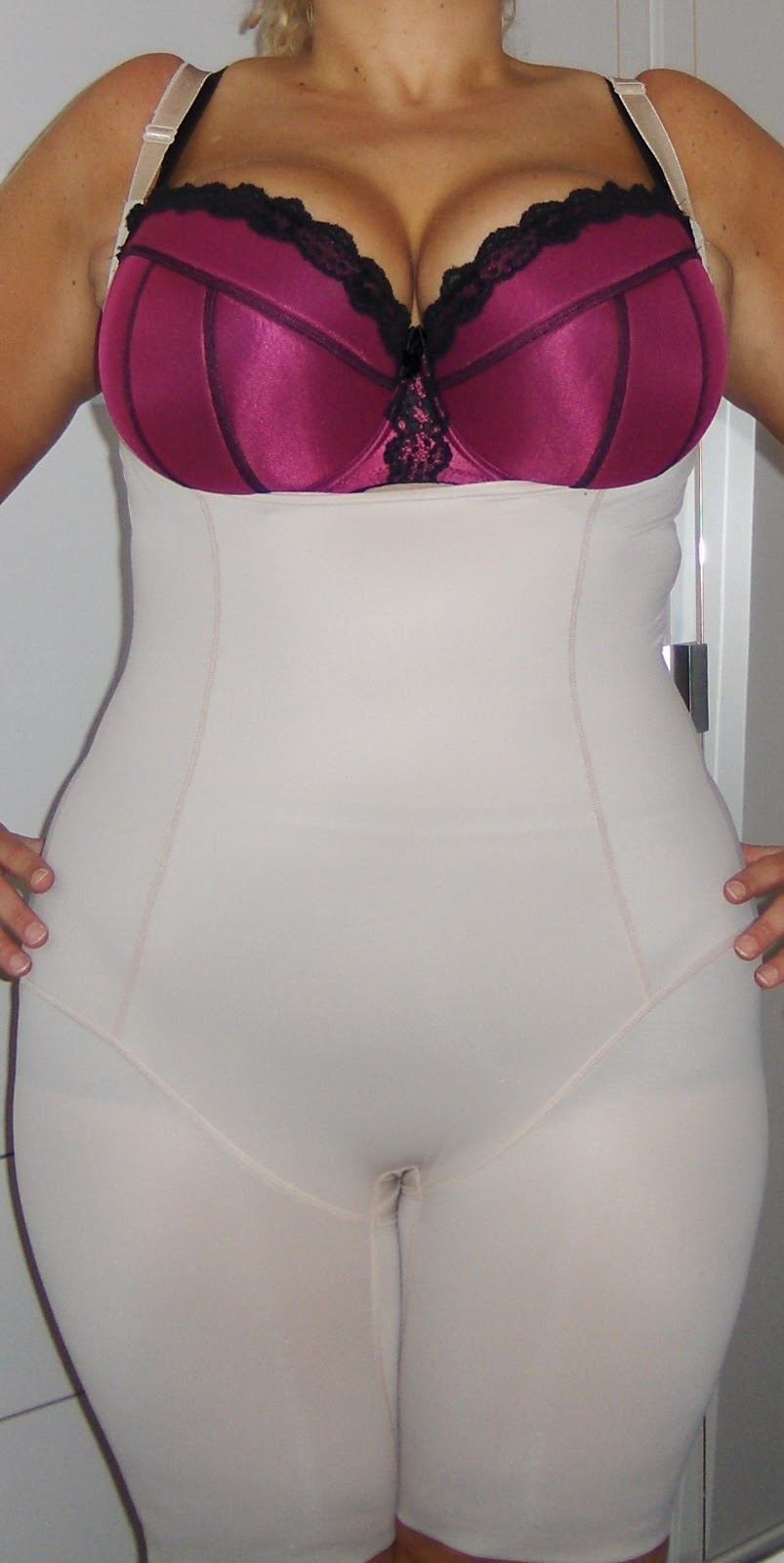 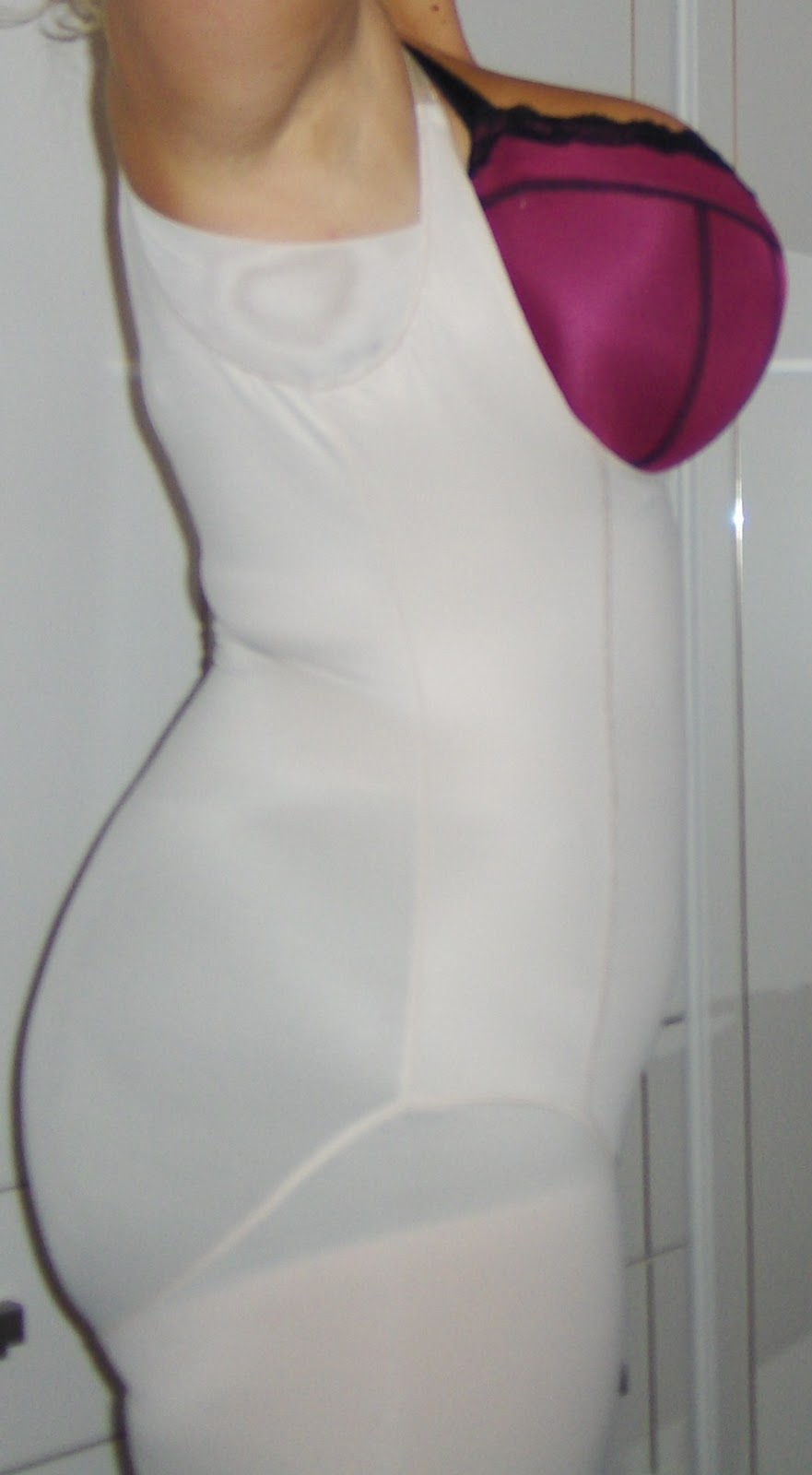 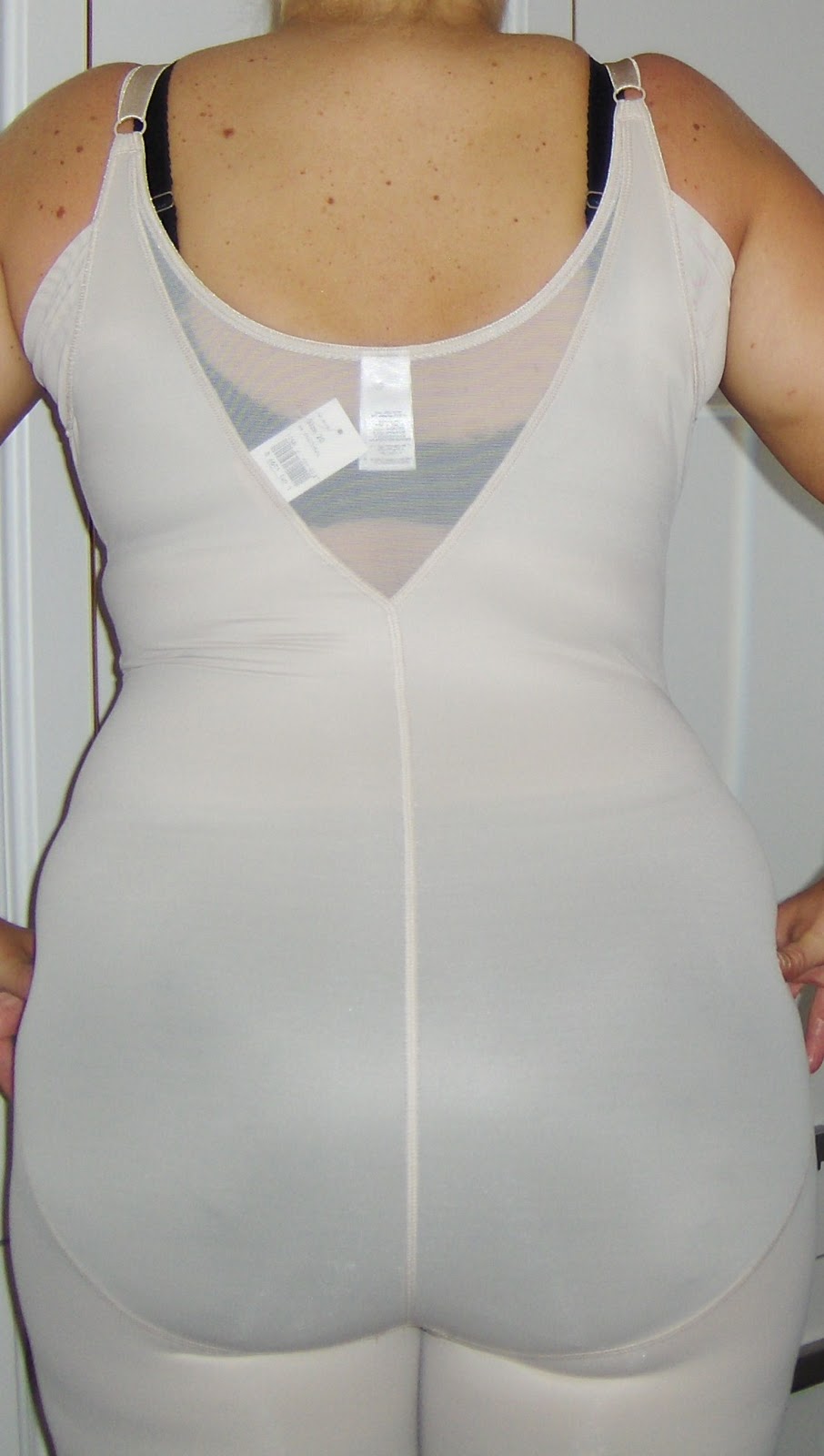 There were several advantages to this bodyshaper.  It has adjustable shoulder straps – similar to bra straps – and it is made from a fabric which is less sheer.  I didn’t feel any hotter in it so it seems to be pretty breathable.  The back section covered more of my back, meaning more areas are smoothed, which is very good.  The legs were longer and had a very slight sort of film along the bottoms so that they should not move or roll up.  And the straps ran along the side of the bust, so I didn’t have to make adjustments as I’d had to with the Maidenform.

I think both of these bodyshapers are great options.  For me, the Debenhams bodyshaper felt more comfortable and did the job better than the Maidenform.  I need to get the Debenhams one in at least one size down, however, and I think when I do the ‘shaping’ will be more effective/dramatic.  At least I am hoping so, anyway!