With the gorgeous weather we were enjoying here in the south east of England (and across much of the UK) today, I decided to spend some time lying out in the garden.  I got back from a holiday on the Mediterranean two weeks ago so it was definitely time to give my fast-fading tan a bit of a top-up.  This has prompted me to write a post on bikinis as I dug one out of the drawer today to wear in my garden.

If you have read my previous posts, you will know all about my struggle to find my ‘ideal’ bra.  This struggle extends to bikinis, which are even more problematic as matching briefs are required.  Some of you might think that matching briefs are also a requirement with bras – having recently purchased matching lingerie sets in abundance I am now in the position to wholeheartedly agree with you!  However, up until a couple of months ago, I was forced to be satisfied with simply finding a comfy, well-fitting bra, and matching briefs were stuff of which dreams were made.

I should also add here that I am unable to wear an all-in-one swimsuit.  They simply do not fit me.  Underwired swimsuits don’t sit right on me as the wire comes away from my ribcage (yes, even Freya ones).  I think this is because with the ones I’ve tried at least there is no fastening around the back.  A non-wired swimsuit is so hideous a thought for someone like me who wears a 36J that I won’t even go into why it would be completely and utterly wrong for me.  I have never found a tankini that extends to a J cup, although I must admit to not looking particularly hard for one as this is a style which does not appeal to me.  So, a bikini it is.  I don’t mind too much about this as there’s something rather lovely about having a suntanned tummy 🙂

Over the years, I have tried various styles of bikini.  I learned long ago that for me it’s no good buying a set by size (e.g. 14, 16, 18 etc) as the cups on these are usually based on a B or C.  Equally, I can’t get away with itsy bitsy triangle/string bikinis (no matter how nice they look in the catalogue!) as I need scaffolding for my lady lumps and that means underwire and a large cup size.

Long ago I decided the best way to overcome the matching briefs issue was to buy a bikini top that I could fairly easily buy some plain briefs to go with.  This gave me more options with regard to brief styles (high cut, low cut, tie sides, etc) and meant that I could often buy the briefs from the high street, in shops such as BhS or Marks & Spencer, or on eBay.  Happy days!

I used to wear a lovely plunge bikini top by Panache.  I had it in two colours, black and hot pink, and it was great.  It was like a Wonderbra but it was a bikini top.  Unfortunately my boobs grew so I had to find new swimwear.

Around 3 years ago I bought a Freya Black Russian bikini top in 36HH.  It was gorgeous and really comfortable.


However, although it fitted nicely before going on holiday, I found that after wearing it all day every day for two weeks, it soon stretched and became too big and therefore rather uncomfortable.  I kicked myself for not getting it in a smaller size as it really was a super bikini top and it had been really straightforward to find some plain black bikini briefs from the high street to wear with it.  Some time later I sold the top on eBay.

When my next holiday came around, I decided to stick with Freya as the fit of their balconette bikini tops was great.  I went with the Vodkatini Cocoa Bay in brown with orange edging, as I had already found a cheap pair of plain brown bikini briefs on eBay. 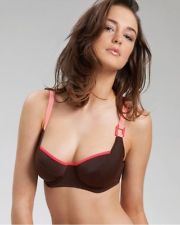 I bought a 36GG as, although it started off a wee bit snug, I remembered my experience from the previous year and allowed for the top to stretch with wear.

It served me well for my time in the sun but again, towards the end of the holiday, I felt the top was stretching a little and was not as comfortable, well-fitting and supportive as when I’d first bought it.  Also the orange straps significantly faded in the sun and are now a wishy-washy pale orangey/beigey colour. 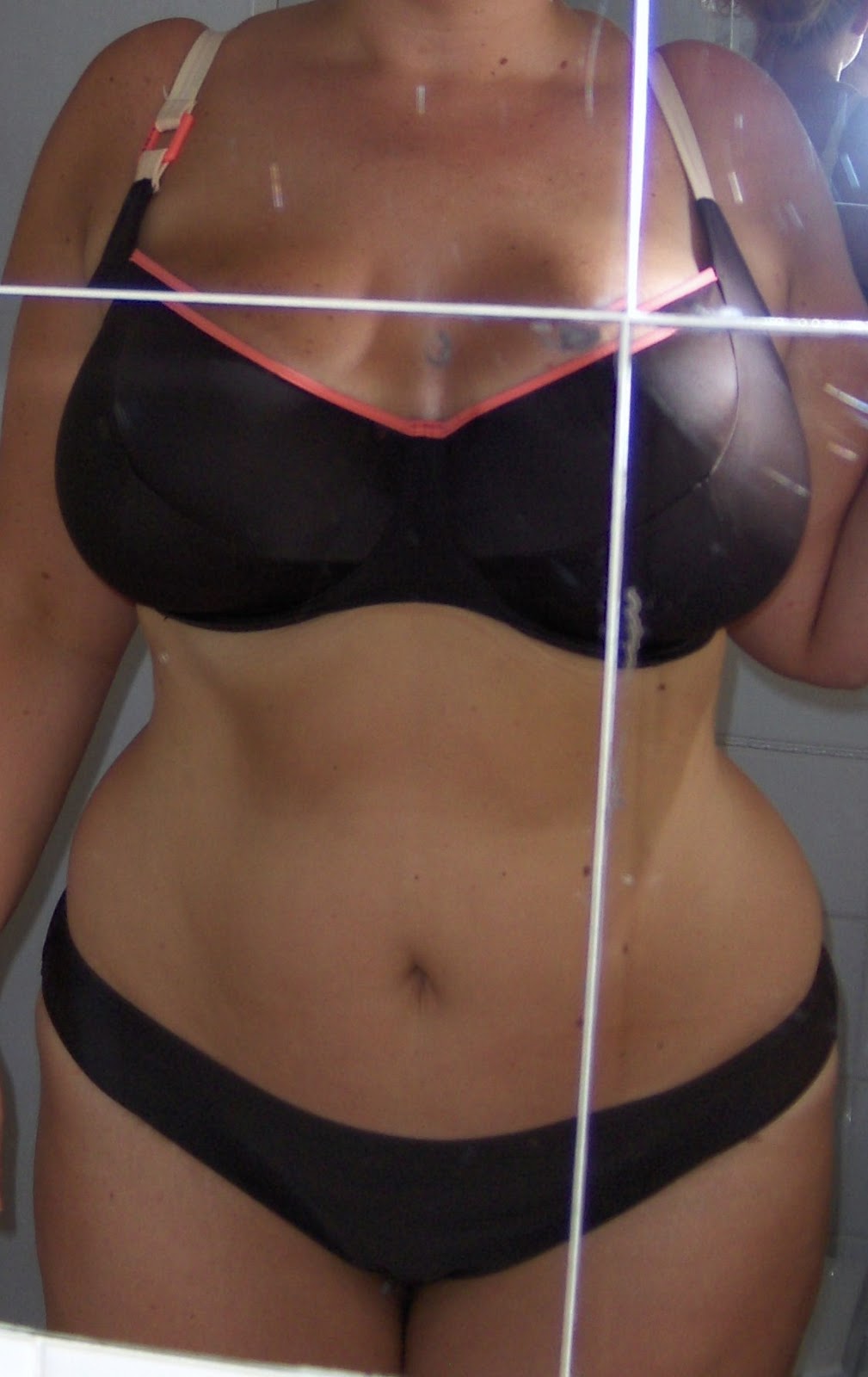 However, I kept the bikini in my drawer after my holiday as I didn’t want to get rid of it before having bought a replacement the following summer.  I ended up wearing it today when I was lying in the garden.  It still feels like the fit isn’t quite right but it’s fine for wearing at home.

So this year was yet another summer when I had to find a new bikini top and briefs.  This time, I wanted to try something a bit different.  I have been lusting after a halterneck bikini for as long as I can remember but have never tried one from Freya (needless to say it HAD to be underwired).  After reading a review online (I forget where) of the Freya Pier halterneck bikini top, I knew I had to try it out for myself and placed an order with Leia Lingerie as they had it in their outlet in last year’s colours of red and green, available at significantly reduced prices.


I LOVED both colours but decided that the red was better on my (pre-tan) fair-ish skin.  I also knew it would be much easier to find plain red briefs than it would be trying to match up the green.

The largest cup size Freya do in this bikini top is 36GG, which is what I went with. 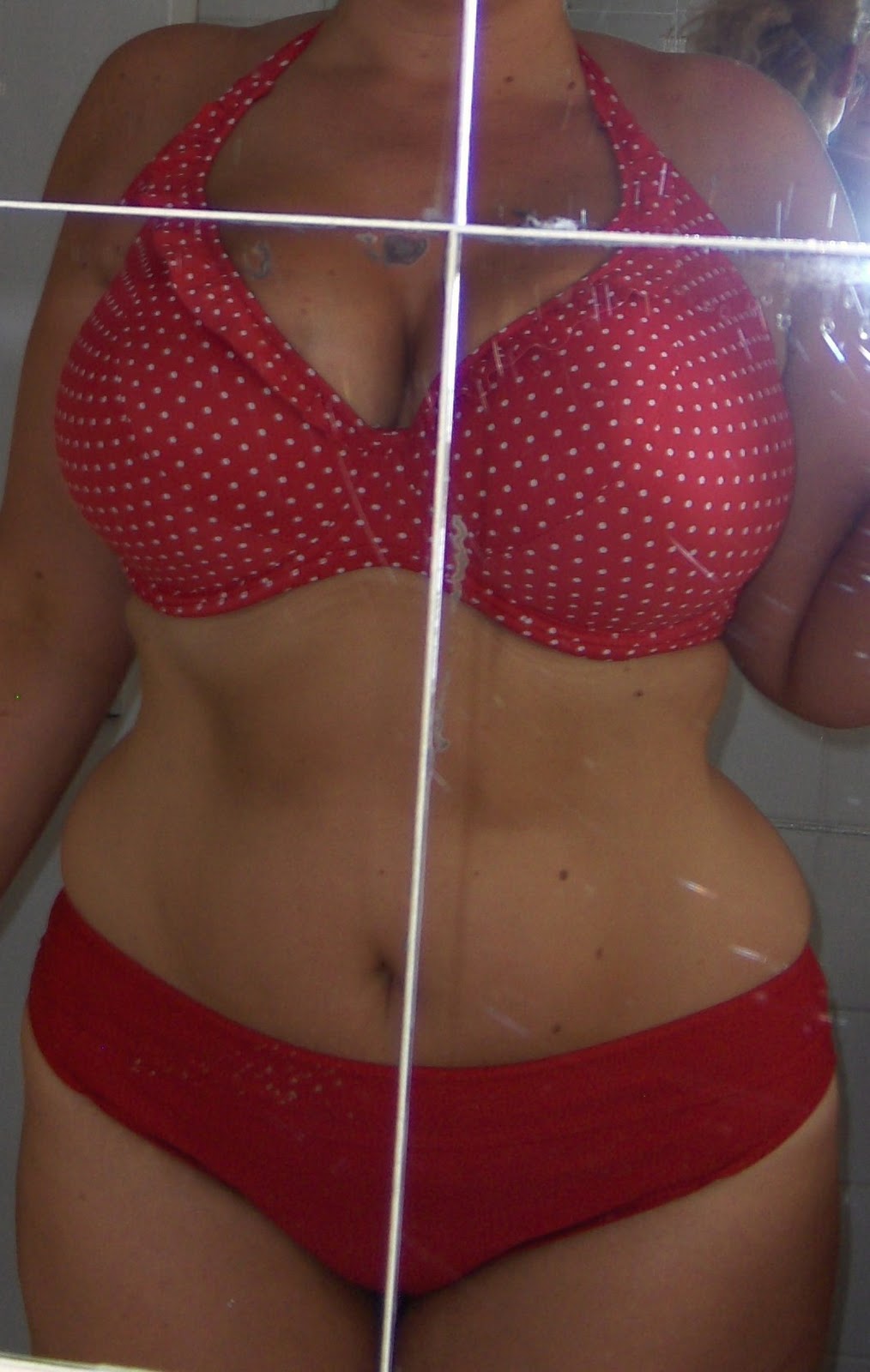 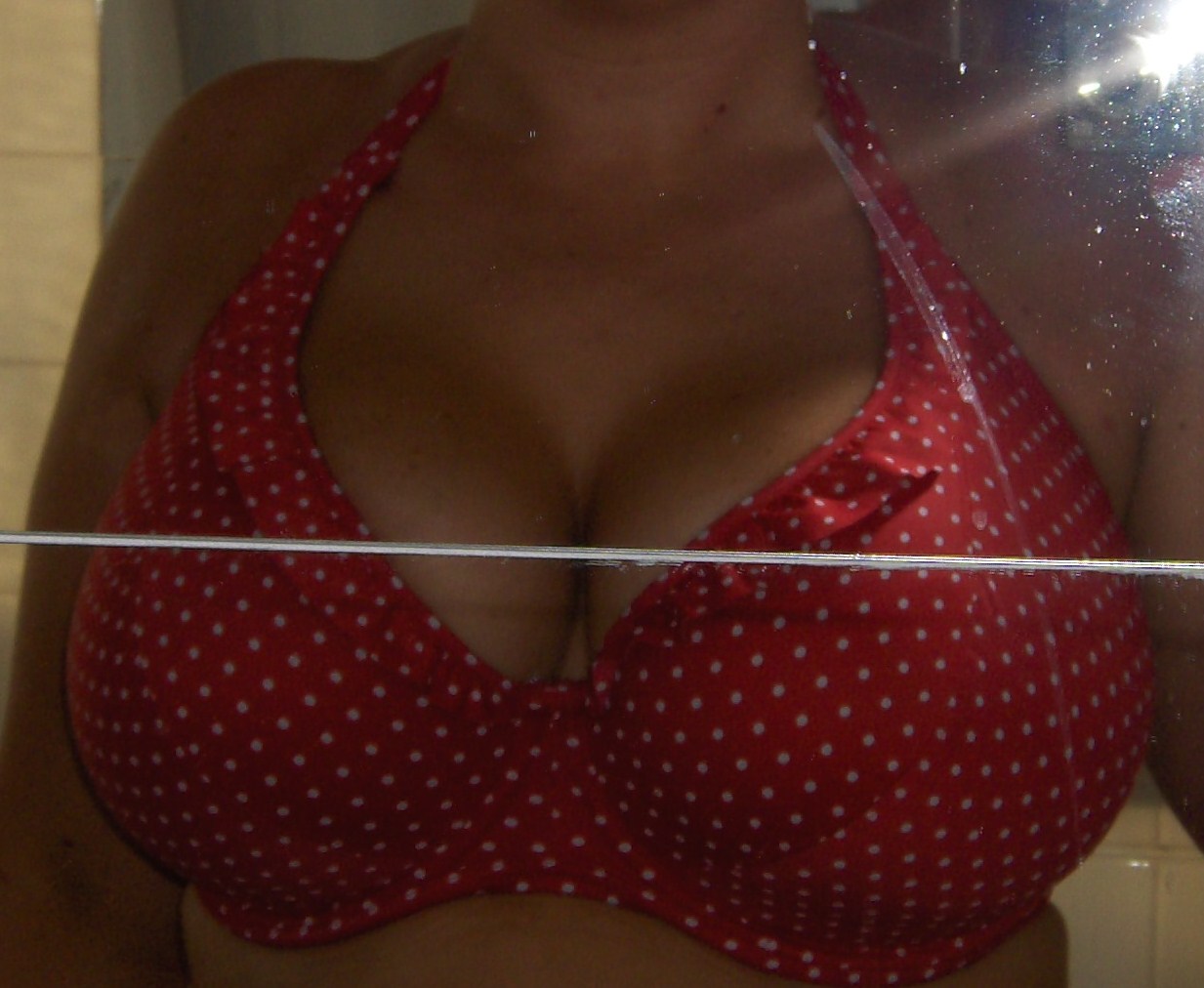 The photo makes the briefs look much darker than the top but in reality they’re not a bad match at all.

As it’s a halterneck, a significant amount of boob weight is carried around the neck.  This meant for me that the top was not as comfortable as those with shoulder straps; a fact which I begrudgingly acknowledged and ended up not wear this set as much as I thought I would.


I already owned a pair of plain black bikini bottoms so this seemed to be a great option. 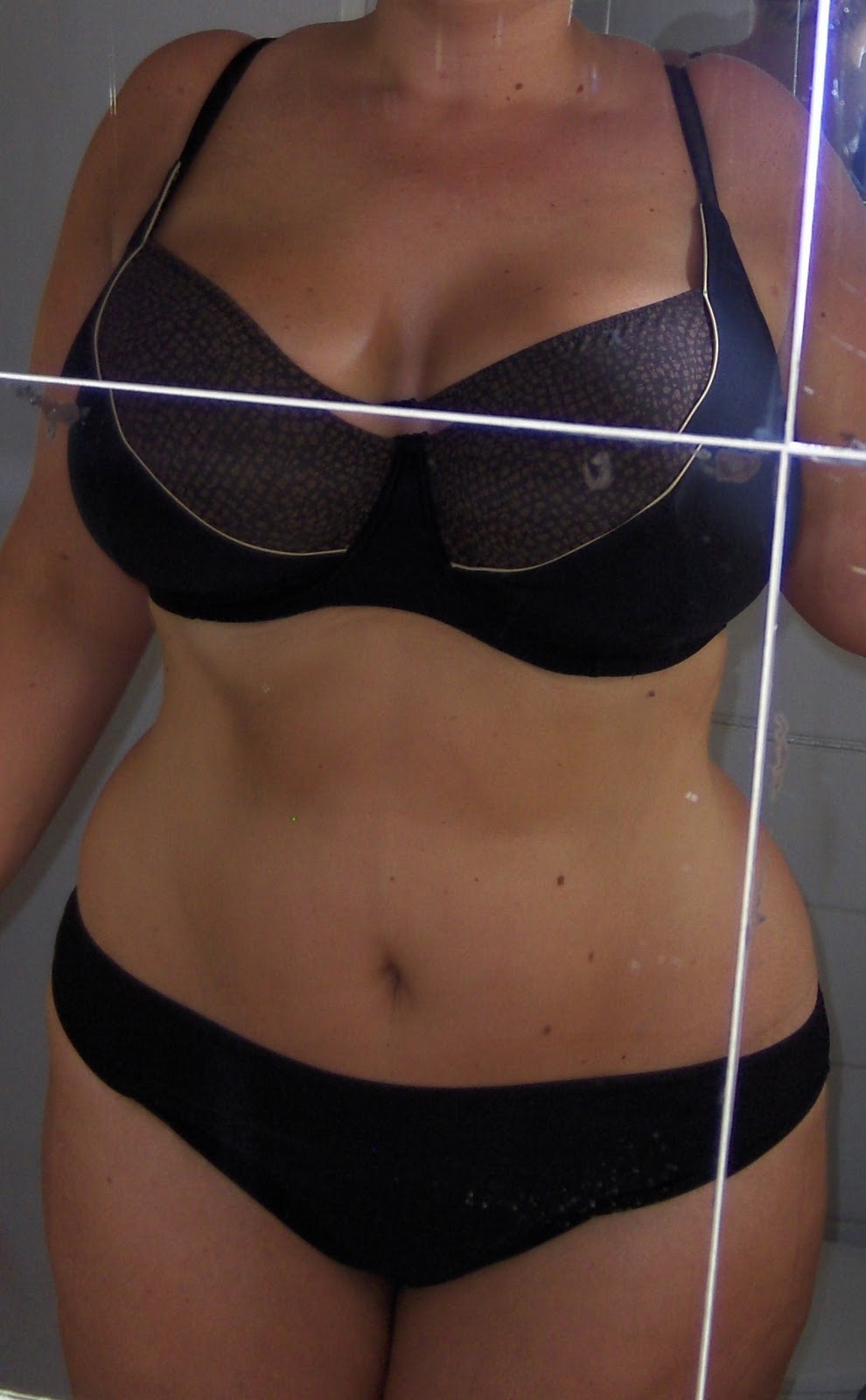 As this was a sale item, size options were limited.  My previous experience of Fantasie bikini tops was that the band sizes run rather small so I went with a 38G.  It seemed quite tight at the time and one of the main reasons I chose it was because the shoulder straps were thinner than the Freya tops I’d owned in the past, and the back of the band was also quite slim.

But…yet again I found the top becoming increasingly loose with wear (what on earth am I doing wrong here?).  Four days into the holiday and I was constantly adjusting the cups as the band was much too big.  I had little choice but to wear it as it’s not as if someone with J cup boobs can easily find a new bikini top to buy on a Greek island.  Now that I’m home I will be selling it on eBay so that it can go to a good home.

Last night I had a bit of a moment and bought two new Freya bikini tops on eBay.  Heaven only knows why as I most likely won’t be going on holiday again until next summer!  But they were very cheap and sometimes you have to grab a bargain when you see it.  One of the many good things about Freya bikinis is that you can easily resell them on eBay if they don’t turn out to be right for you as there is always such demand for them.

I am keeping everything crossed that my favourite bra retailer, Ewa Michalak, make some plunge bikinis for next summer (or sooner!).  The shape of their plunge bras would be perfect for a bikini – in fact, I almost wore my PL Cielus for sunbathing today!

Failing that, I will definitely be staying loyal to Freya swimwear.  It really does give great shape and support and the range of colours, styles and patterns available is outstanding.  However for me it would be perfect if they made their bikini briefs in larger sizes as even the XL cuts in and gives me lumps and bumps I’d rather not have.

Have you found a great bikini top?  Do you have any tips on how to find a bikini top that does not stretch with wear?  Share your thoughts by leaving a comment below 🙂