Several months ago I was sent a selection of bras from Polish lingerie superbrand Ewa Michalak. One of these bras was the SM Czarna Mgiełka: 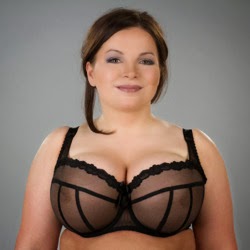 
Back when I wrote my review for the SM Margot Bra, I said I’d love to have a completely sheer bra…and it looks like my wish has been granted! The SM style is an unpadded balconette bra with narrow wires and deep cups to keep one’s breasts held at the front of the body.

I was sent the SM Czarna Mgiełka Bra in 32KK/70KK, which is the same size as my SM Margot.

As you can see, it’s probably about a cup size too small for me, which is why I wasn’t sure if I should review it. However, I decided to share these photos and my thoughts with you in any case as this is a really lovely bra and as you know I have wanted a completely sheer bra for so long!


I wasn’t sent the matching briefs with the SM Czarna Mgiełka Bra, so I improvised and paired it with some sheer briefs I already owned, plus a suspender belt from eBay and my Dublin Lady Fishnet Hold-ups from The Big Tights Company (yes, they are hold-ups rather than stockings, but I tend to wear them with suspenders as they have a habit of rolling down): 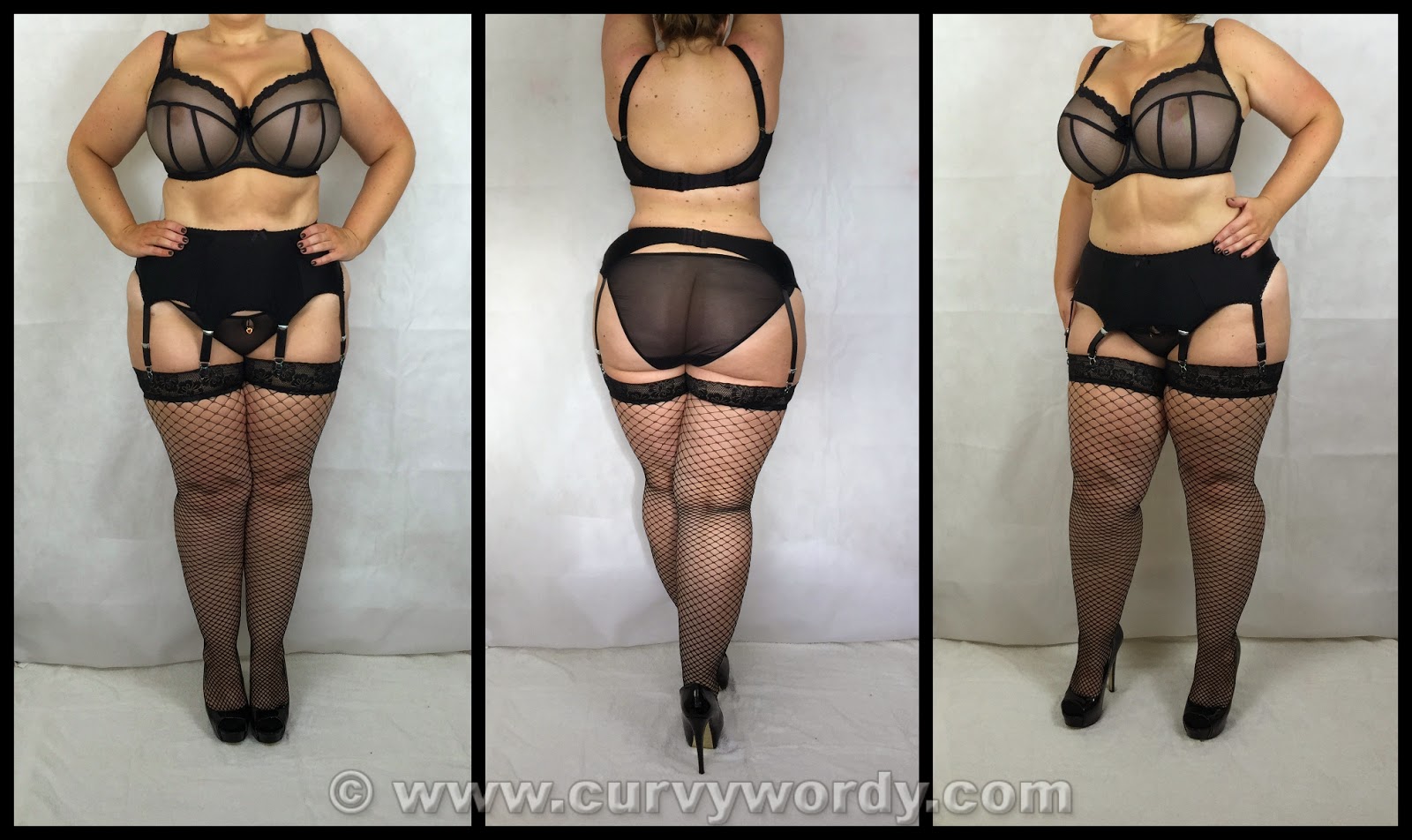 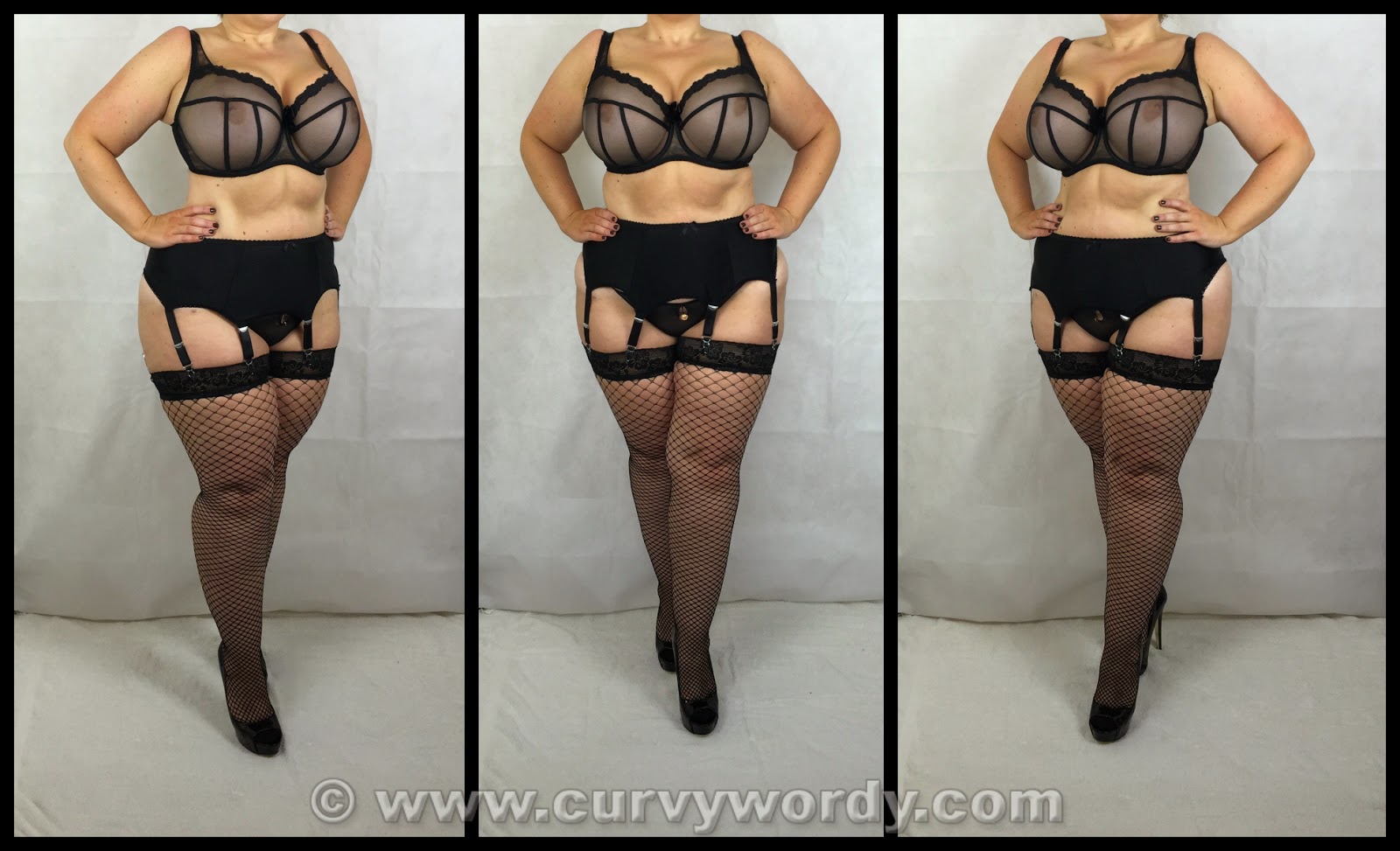 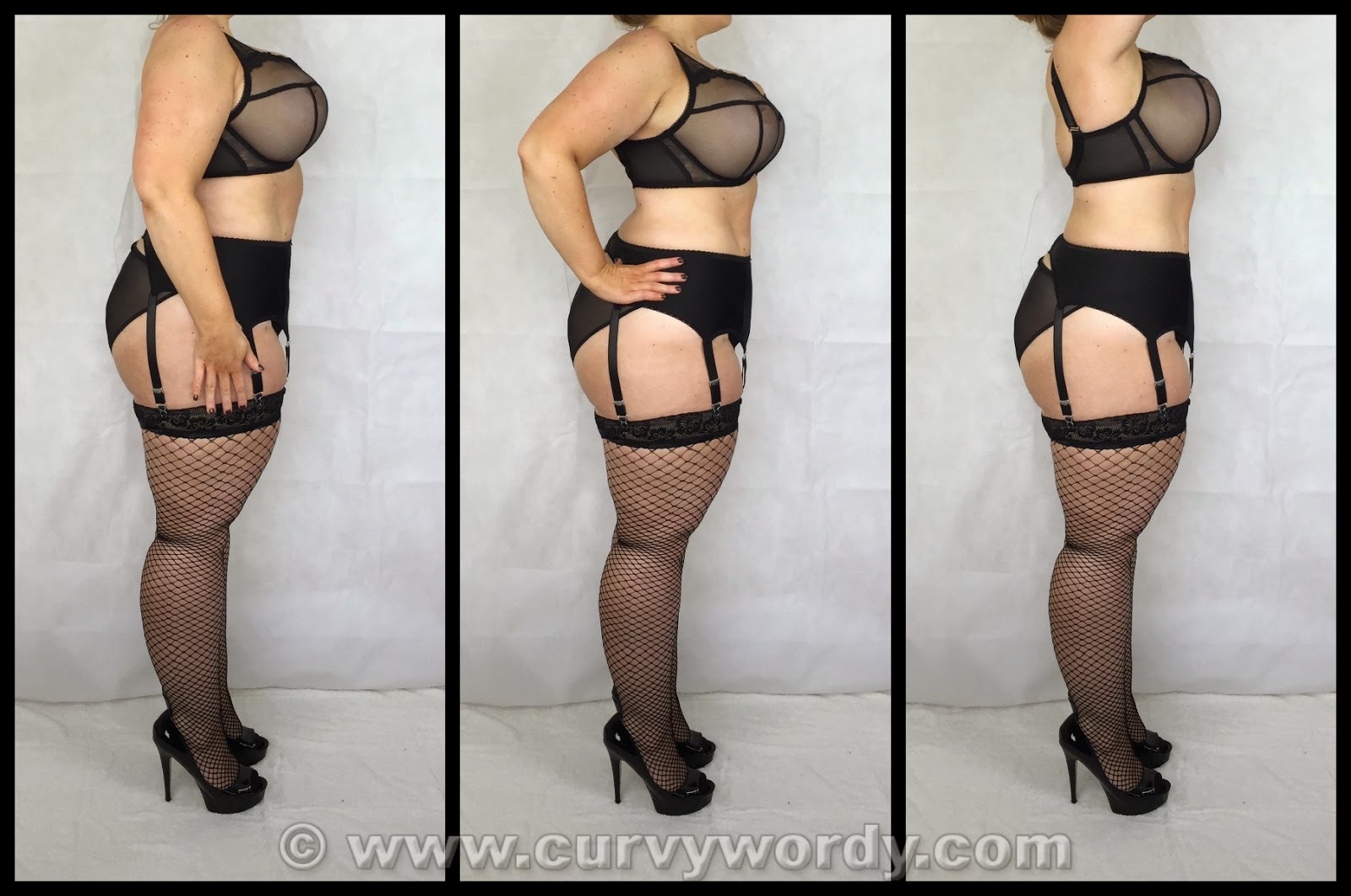 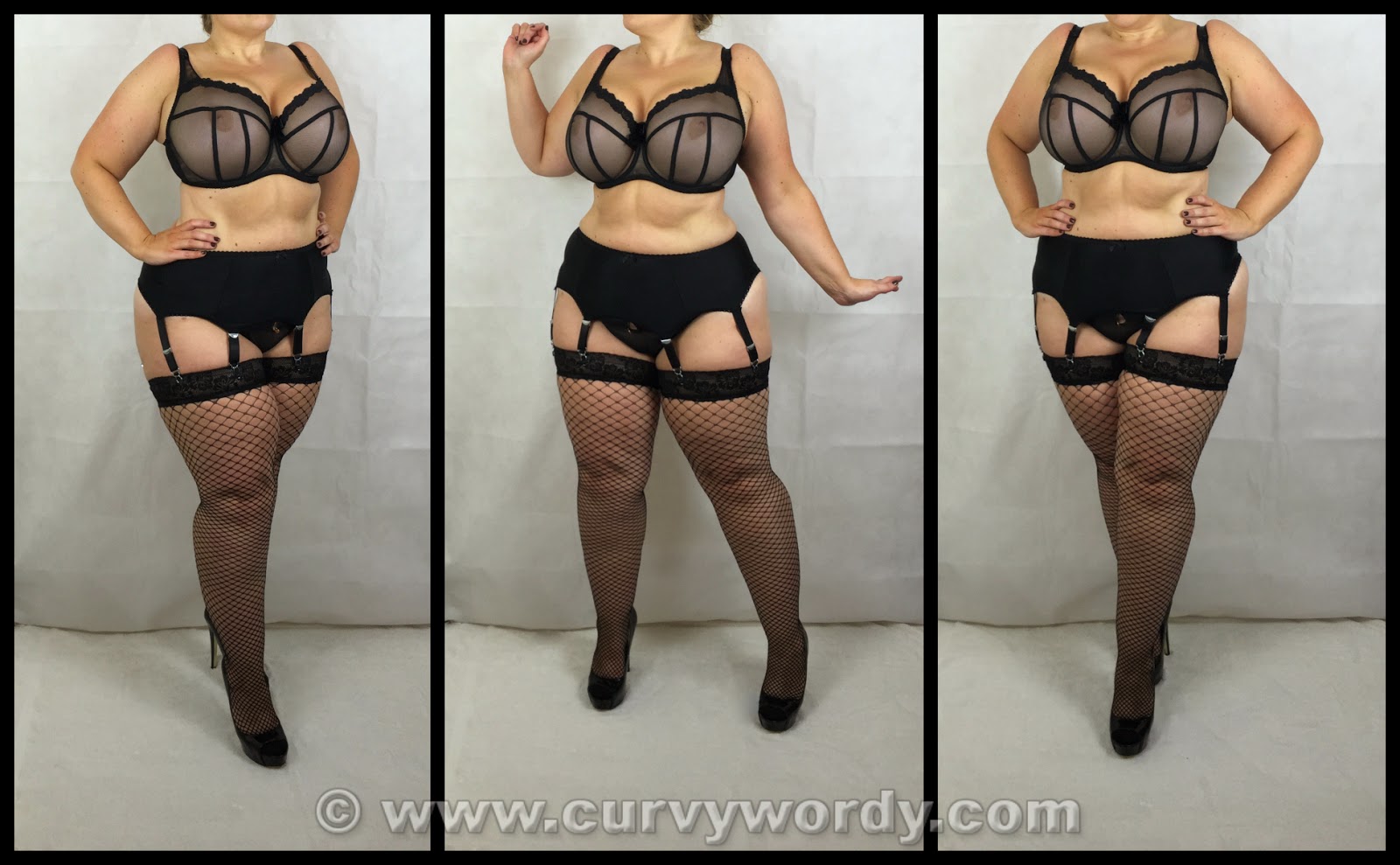 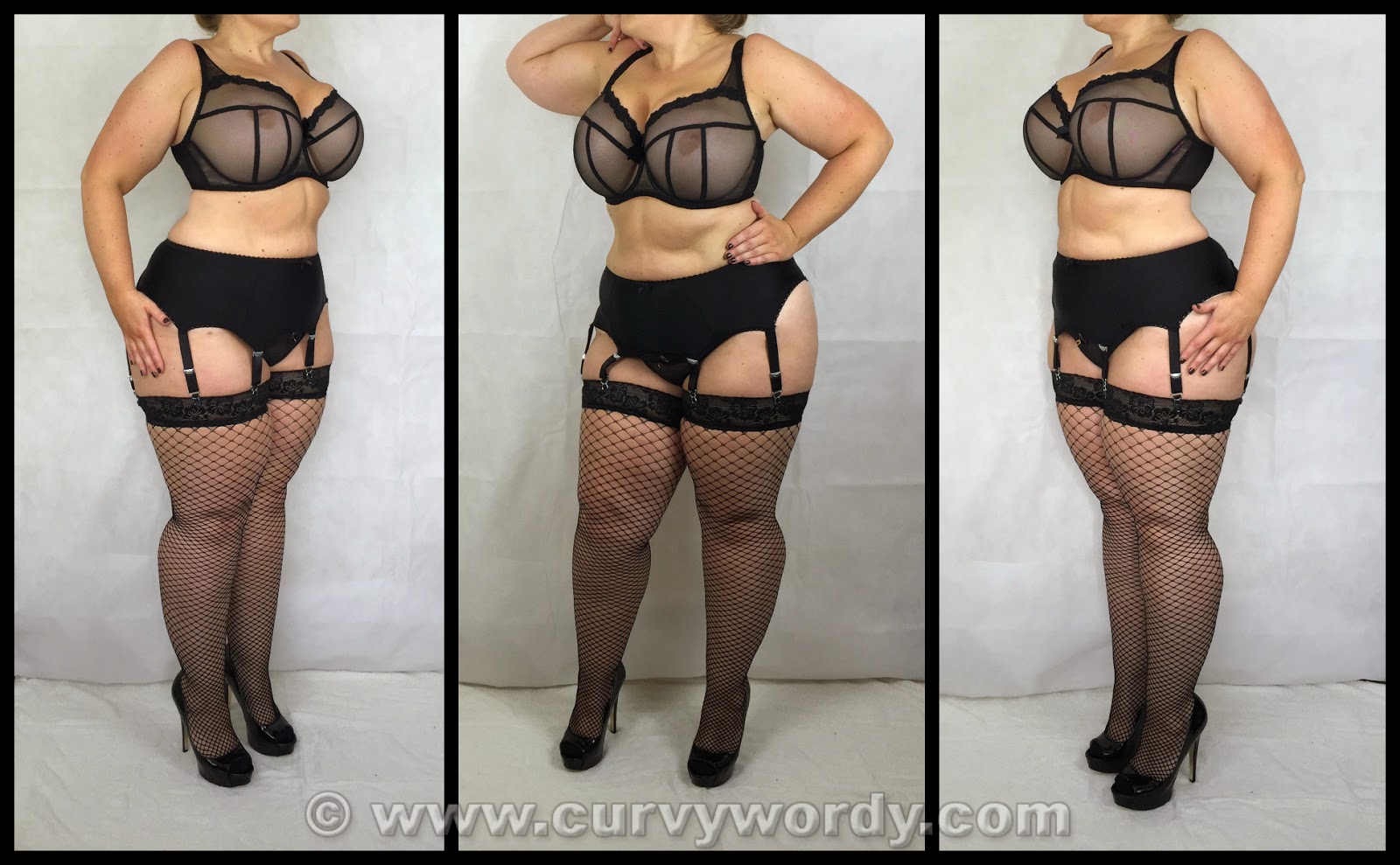 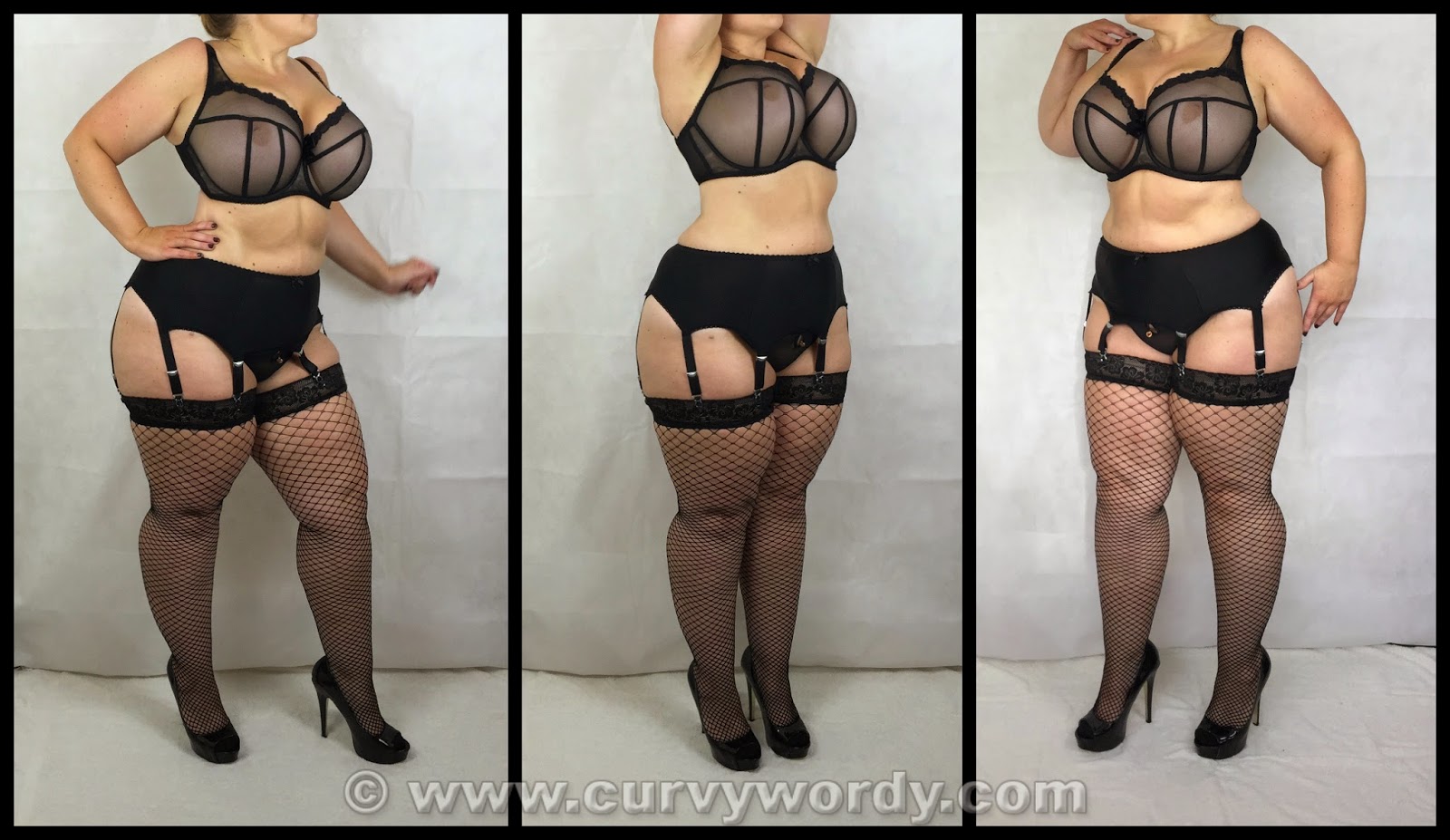 I think this works pretty well as a set – the fishnets look great alongside the sheer fabric of the bra and the briefs, and the plain black suspender belt keeps the set looking simple and unfussy.


So, let’s look at the bra itself. The SM Czarna Mgiełka Bra is made from thin mesh fabric that has completely unlined cups. The fabric has only very minimal stretch to it, and so if the cups are too small (as seen in my photos) there is no room to hide and there will be some quadboobing going on. There is a pretty floral lace embellishment along the tops of the cups, and to add interest there is a large bow on the central gore plus a small bow at the point where the tops of the cups meet the straps.


The cups are made from four part construction, with three sections across the bottom and then one long continuous section on the top. This design ensures the cups give optimal shape, structure, and support, despite the absence of padding. Ewa Michalak is surely a miracle-worker to make bras that are able to hold breasts as heavy as mine aloft, and to make them so perky and rounded, too.


The wires are wonderfully narrow and they encase my breast tissue perfectly. The central gore sits flat on my sternum and it does not dig in at all. Under my arms the wires are not too high and they sit comfortably against the side of my ribcage.


I find the band of the SM Czarna Mgiełka Bra runs very tight, and so I could certainly have done with at least one band size up, and perhaps even two. As you can see in my photos I have to wear the bra with an extender in order to be able to fasten it. The band is firm and only has limited stretch, and it fastens with four rows of three hooks and eyes.


The straps are comfortably wide, fully adjustable, and study so they do not fold over. They have embellishment along the edges so that the adjuster does not move out of place during wear. I often get asked if my shoulders hurt where the straps dig in; my answer is always that I would not wear any garment that was uncomfortable and my photos often make it look like the straps dig in more than they do because I have very squishy shoulders. Yes, I do feel the presence of the straps, but they certainly do not cause me pain. With boobs as heavy as mine bra straps are bound to cause some sort of indent in the shoulders during wear and I suppose I have just got used to it over the years.


With a bra as neutral as the SM Czarna Mgiełka, there are endless possibilities to match it with different bottoms, so here is a second look I put together: 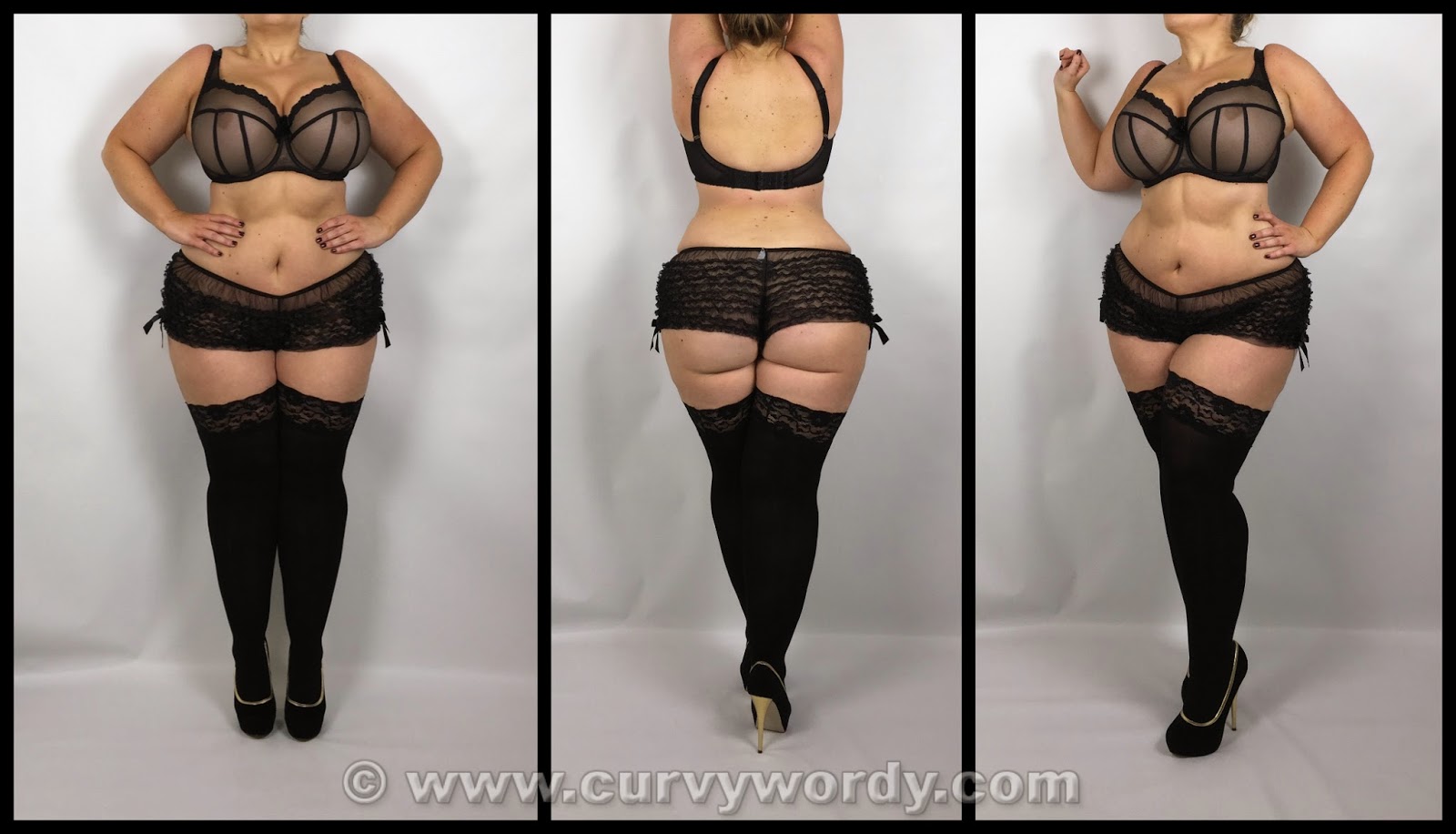 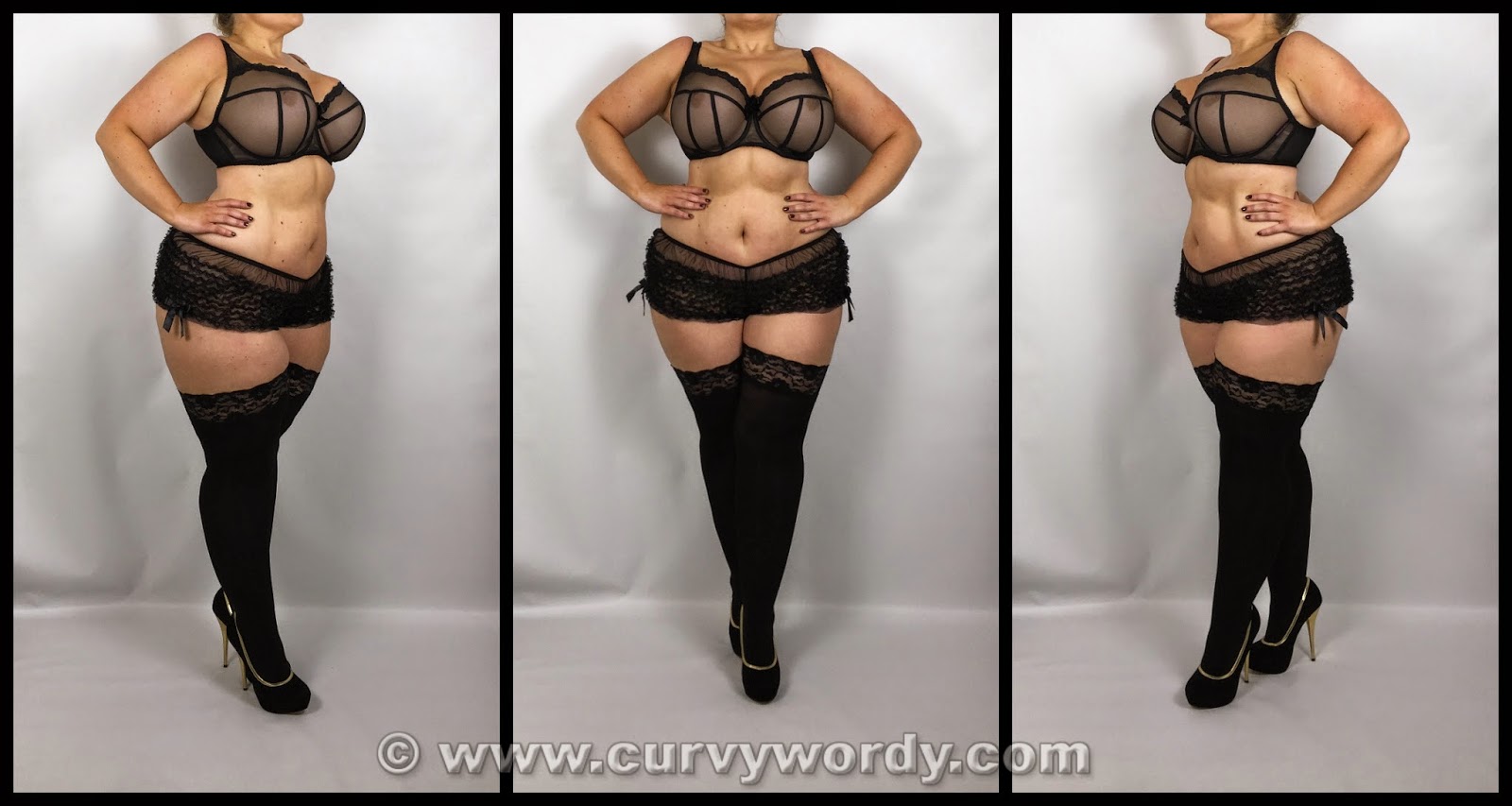 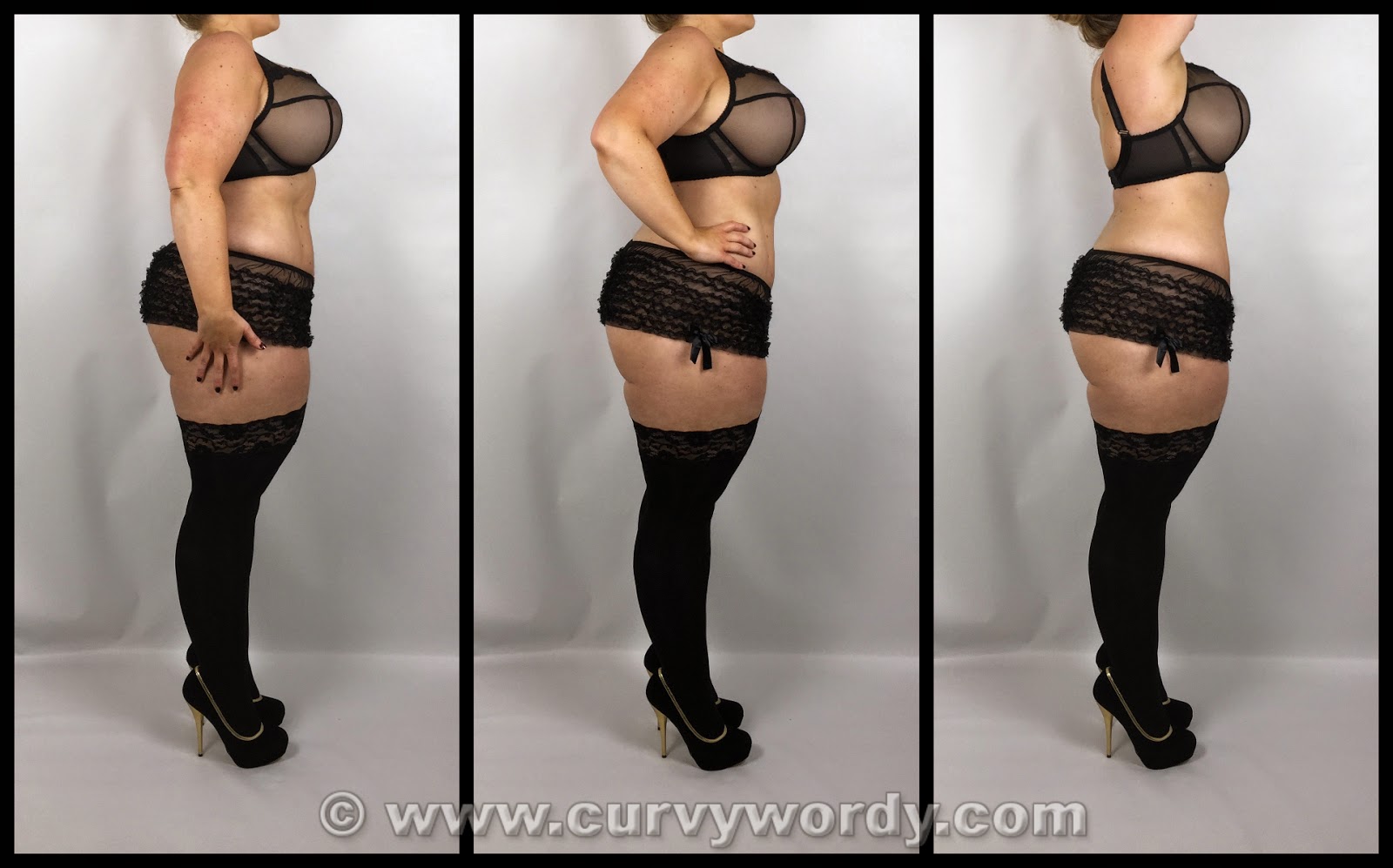 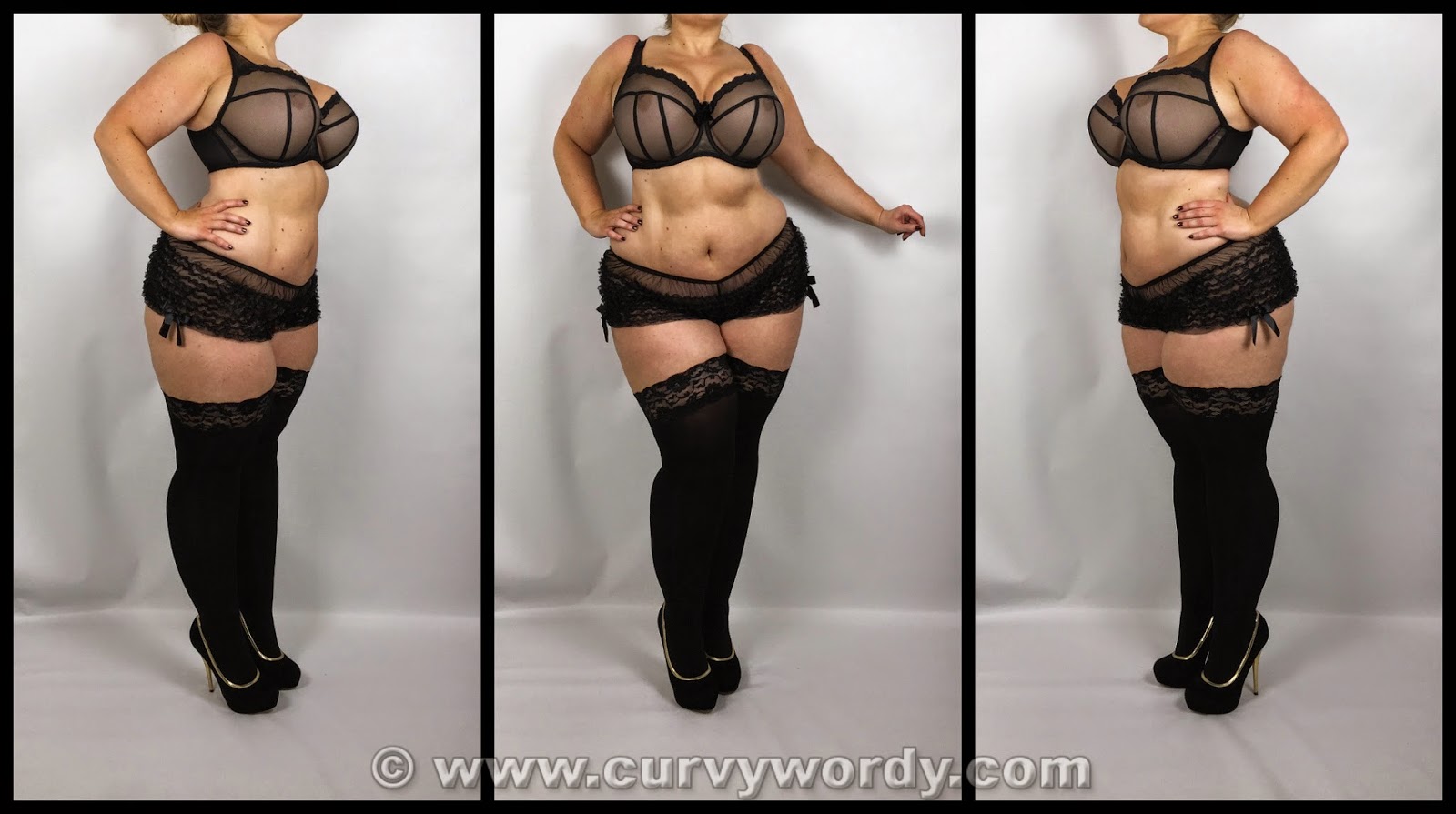 This time I have paired the bra with some frilly knickers from Yummy Bee, and my faithful black Prague Lady Microfiber Opaque Hold-ups from The Big Tights Company. Again, the sheer fabrics work well together and the lace on the tops of the hold-ups is a pretty contrast.


For me, sheer fabrics are very sexy, and I think the SM Czarna Mgiełka is a very seductive and elegant bra. 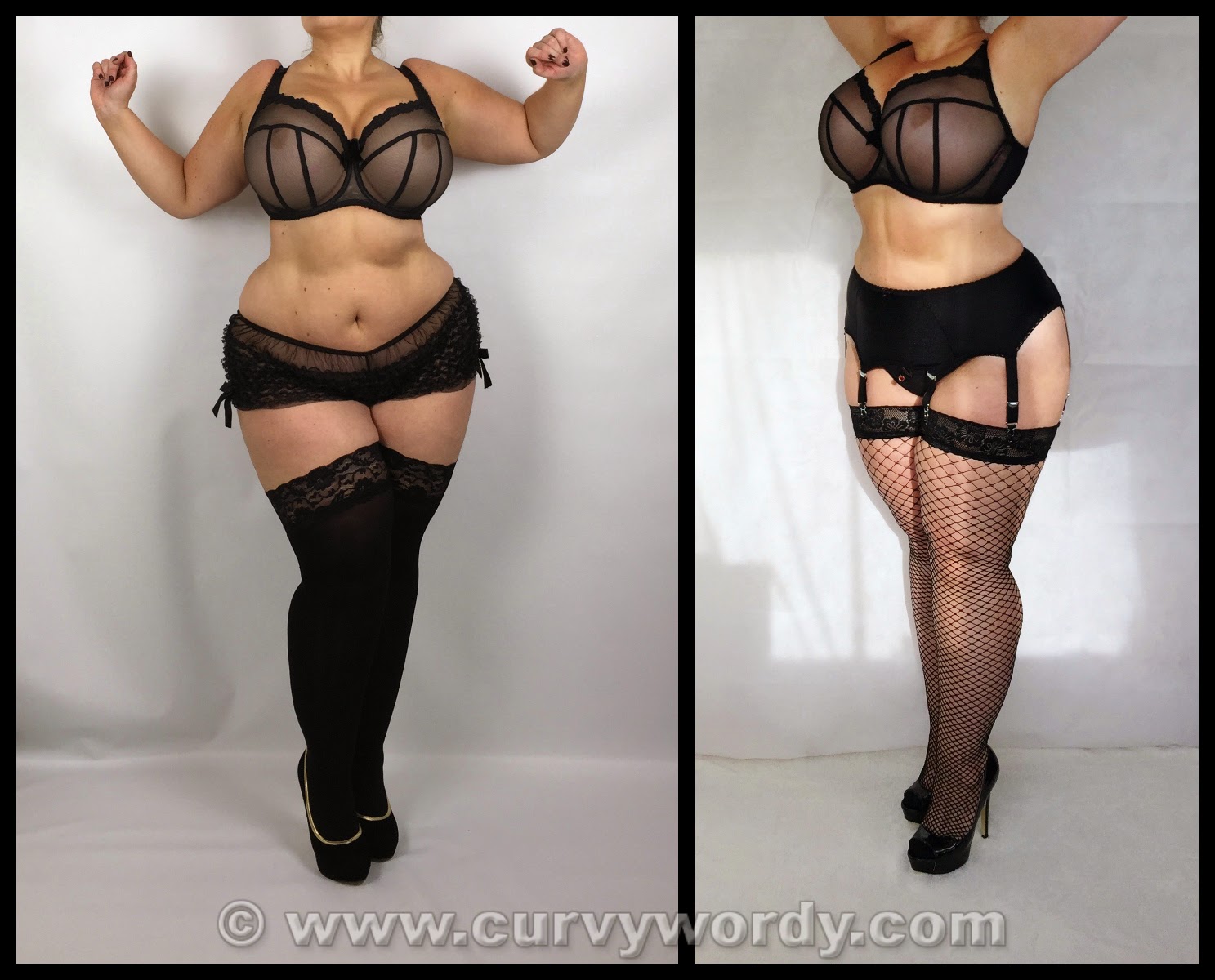 In conclusion, I really love this bra but for best fit I think a 34KK/75KK or possibly even a 34L/75L would be best for me.


I see Ewa has recently brought out the SM Kusidełko, which is essentially a nude version of this bra, with a few differences to the embellishments. It’s another fantastic addition to the range of lingerie available to large-breasted women, and from the looks of Ewa’s Instagram page lately there are lots more gorgeous items coming soon!