Strappy harness bras have been around for quite some time now, but there are very few full busted brands who have embraced this trend. Thankfully Polish lingerie brand Ewa Michalak is a trailblazer and they brought out their own version late last year: the Ewa Michalak S Przeplatanki Bra. 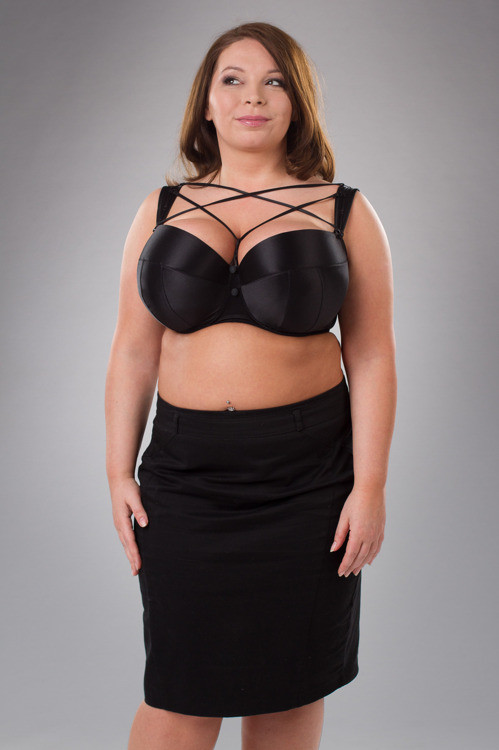 Naturally I was super eager to get my hands on this bra, so I was thrilled when the team at EM offered to send me one. I say one, but in the end they very kindly sent me two as I wasn’t sure which size would work best. I received the Ewa Michalak S Przeplatanki Bra in 32LL/70LL and 34L/75L. 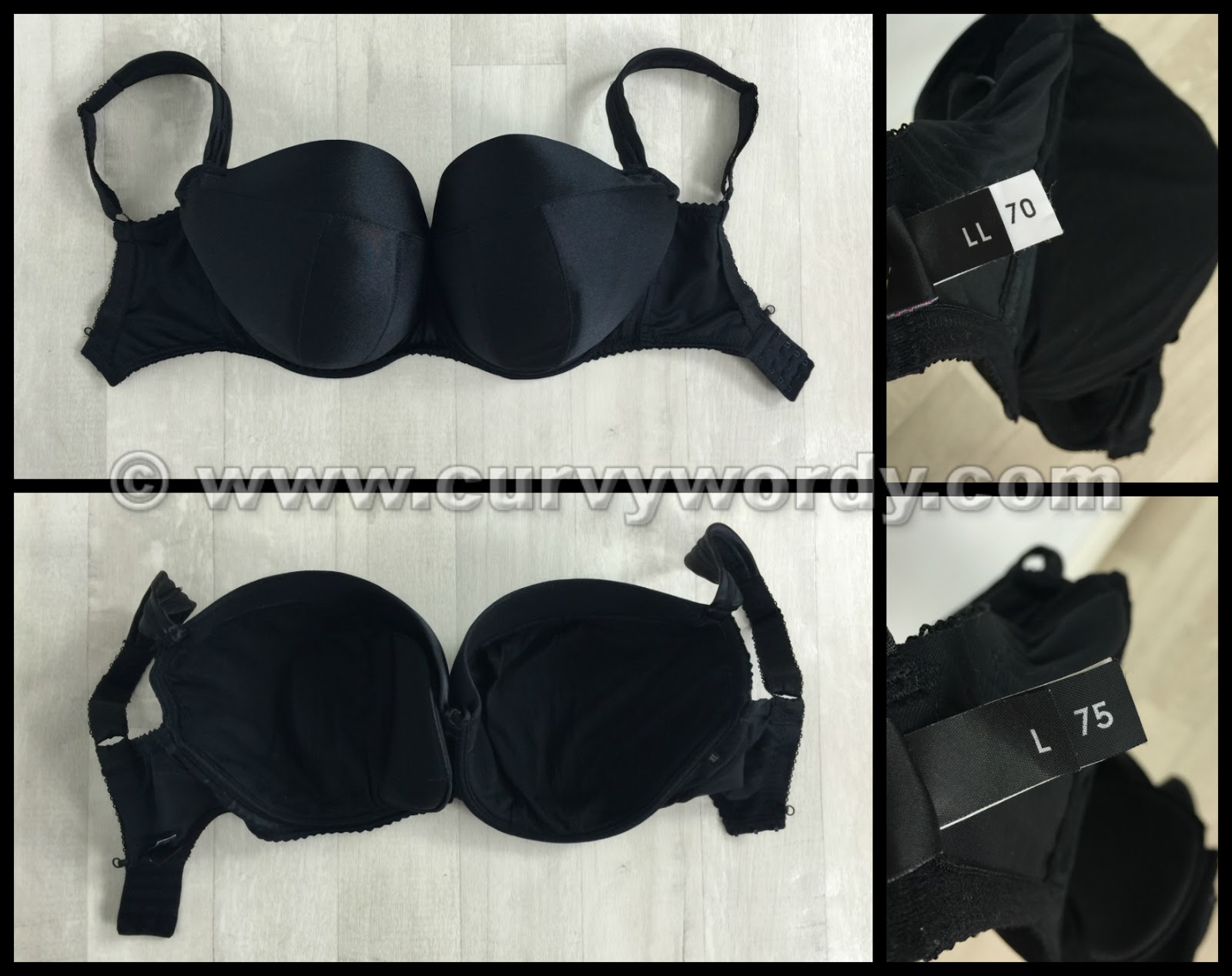 The S style bra has lightly padded foam cups overlaid with fabric – in this case black satiny material. The cups are lined with cotton for coolness and comfort. Inside the cups are removable pads, which are intended to be used to help correct the appearance of asymmetry. One can wear one pad in each cup, one pad in one cup, two pads in one cup, or no pads at all. In these photos I am wearing one pad in each cup as my breasts are pretty symmetrical but they are large and heavy so the extra support the pads provide is most welcome. 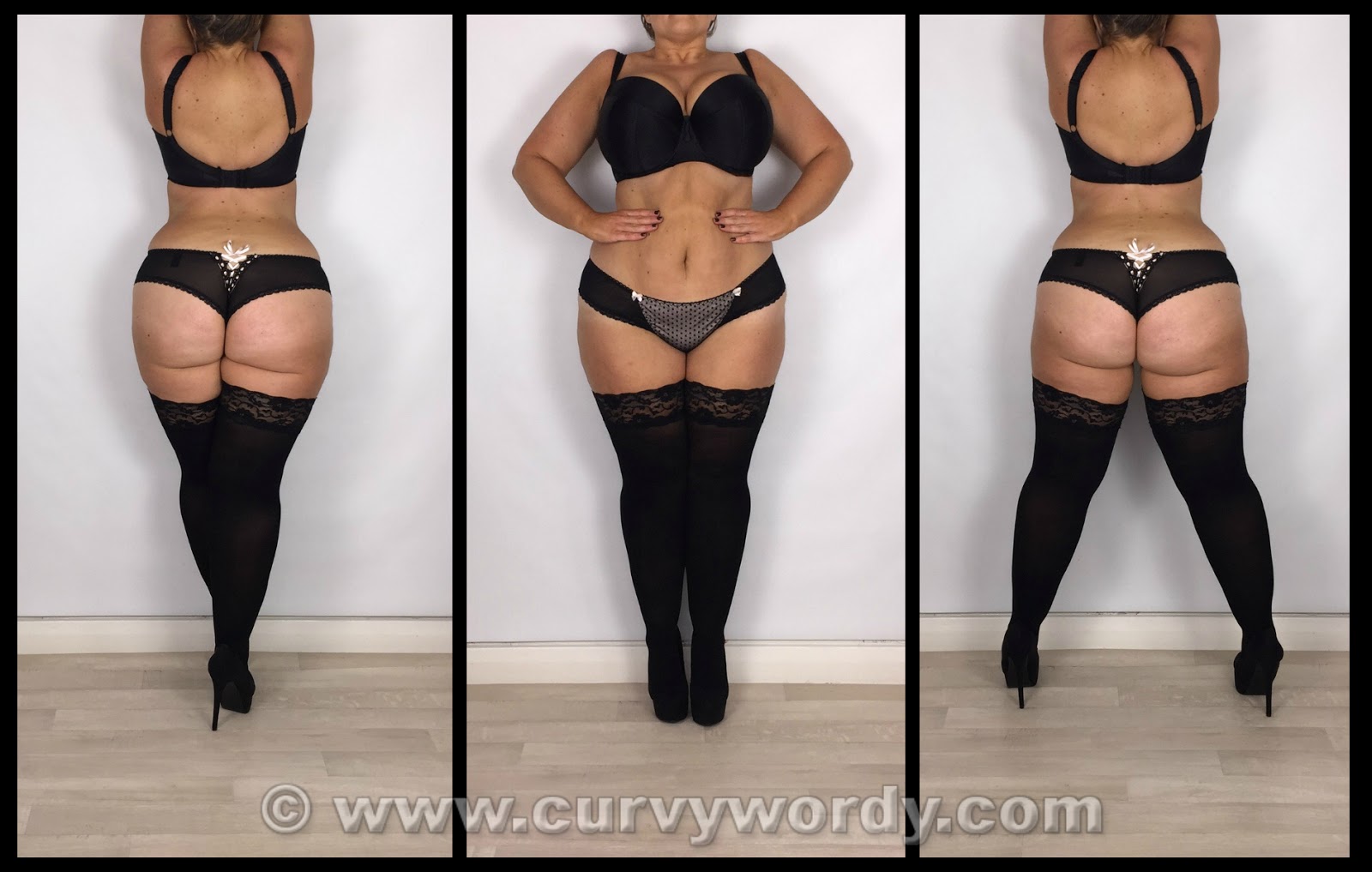 In the photo above I am wearing the 34L/75L bra with an Ewa Michalak thong from several years ago. I used to own the matching bra – it was one of the very first I bought – but I sold it on a while back as I had long outgrown it. In the subsequent photos I am wearing the 32LL/70LL bra with my Onyks thong, which is plain and matches well with the simple design of the Ewa Michalak S Przeplatanki Bra. In all of these photos I am wearing heels from George at Asda and Prague Lady Opaque Microfiber Hold-ups from The Big Tights Company. 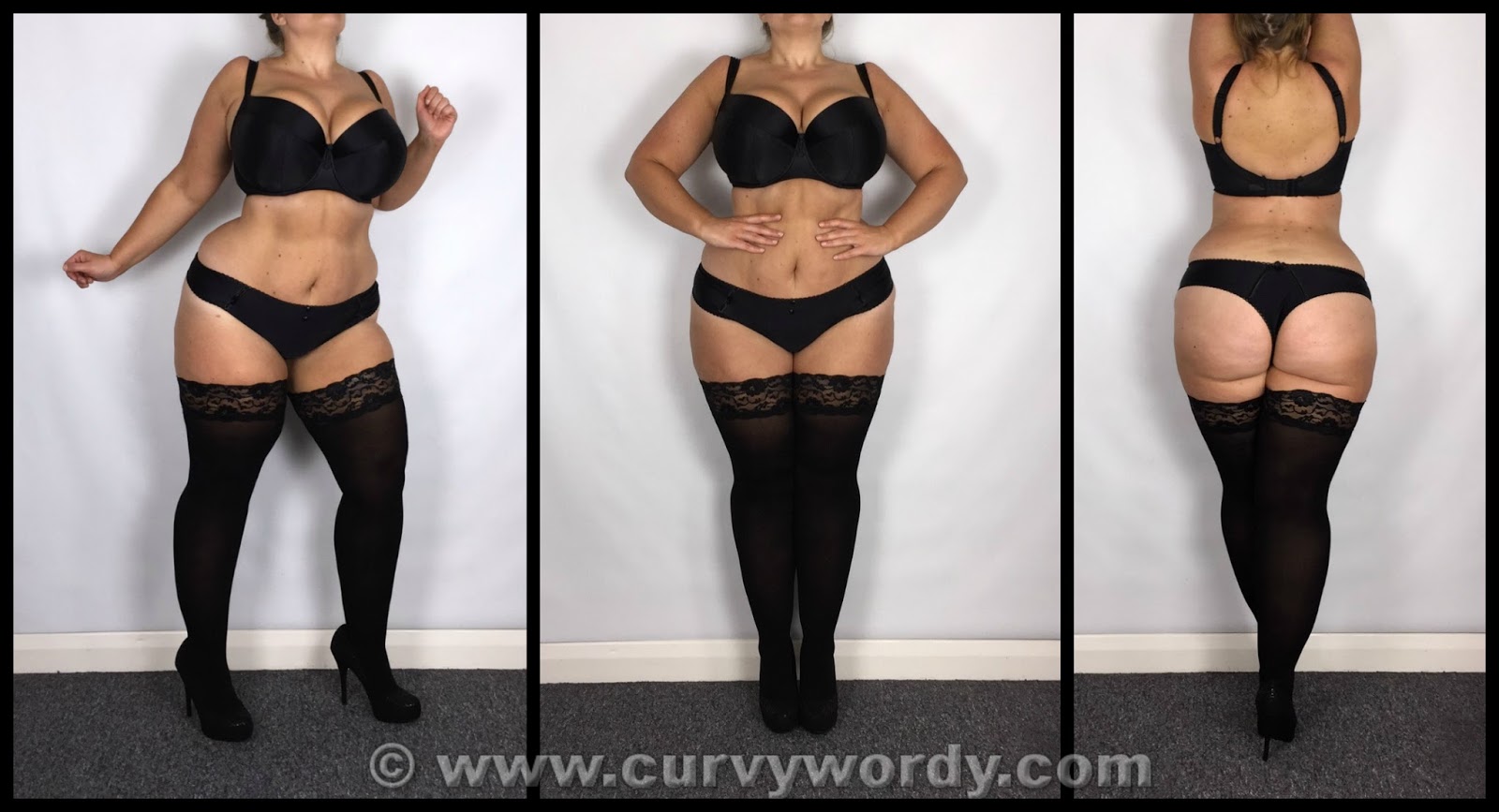 I’ll explain later how this bra can be converted into a strappy harness bra, but let’s not forget that it is first and foremost a fully functioning bra that offers superb shape, support, and lift. The S bra is ideal for women with soft breast tissue as it has a higher central gore than the PL, which is a plunge bra of a similar style. The higher central gore and cups that provide slightly more coverage mean the breast tissue is securely contained within the cups and is less likely to spill out. The cups of the S bra – in my size at least – are made from four-part construction, so they provide excellent shape and support. 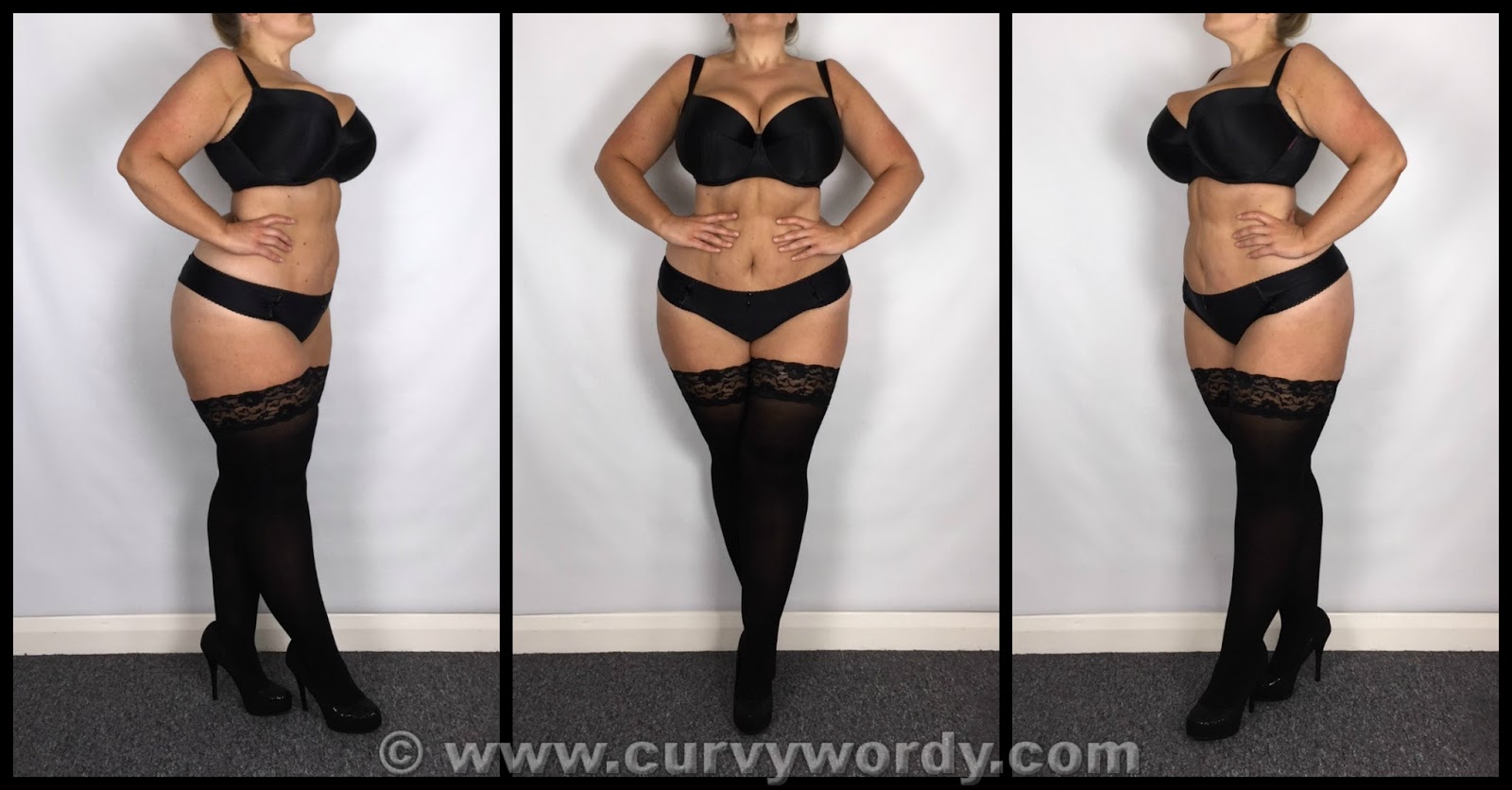 I regularly rave about the cups of Ewa Michalak bras – they are just amazing! The cups are deep and the wires are narrow, both of which perfectly suit my narrow-rooted large breasts. In case you don’t know, your breast root is essentially the area of skin where each breast joins your body. In some women this area is wide, and so they need bras with wide wires. On me it is narrow, which is why I love brands who make bras with narrower wires such as Ewa Michalak. You might notice me quadboobing in some of these photos and that is because I need a larger cup size – my next EM bras will be 32M/70M. However it’s not so bad that these bras are unwearable, and I can always get a bit of extra room in the cups by removing the pads I mentioned earlier. 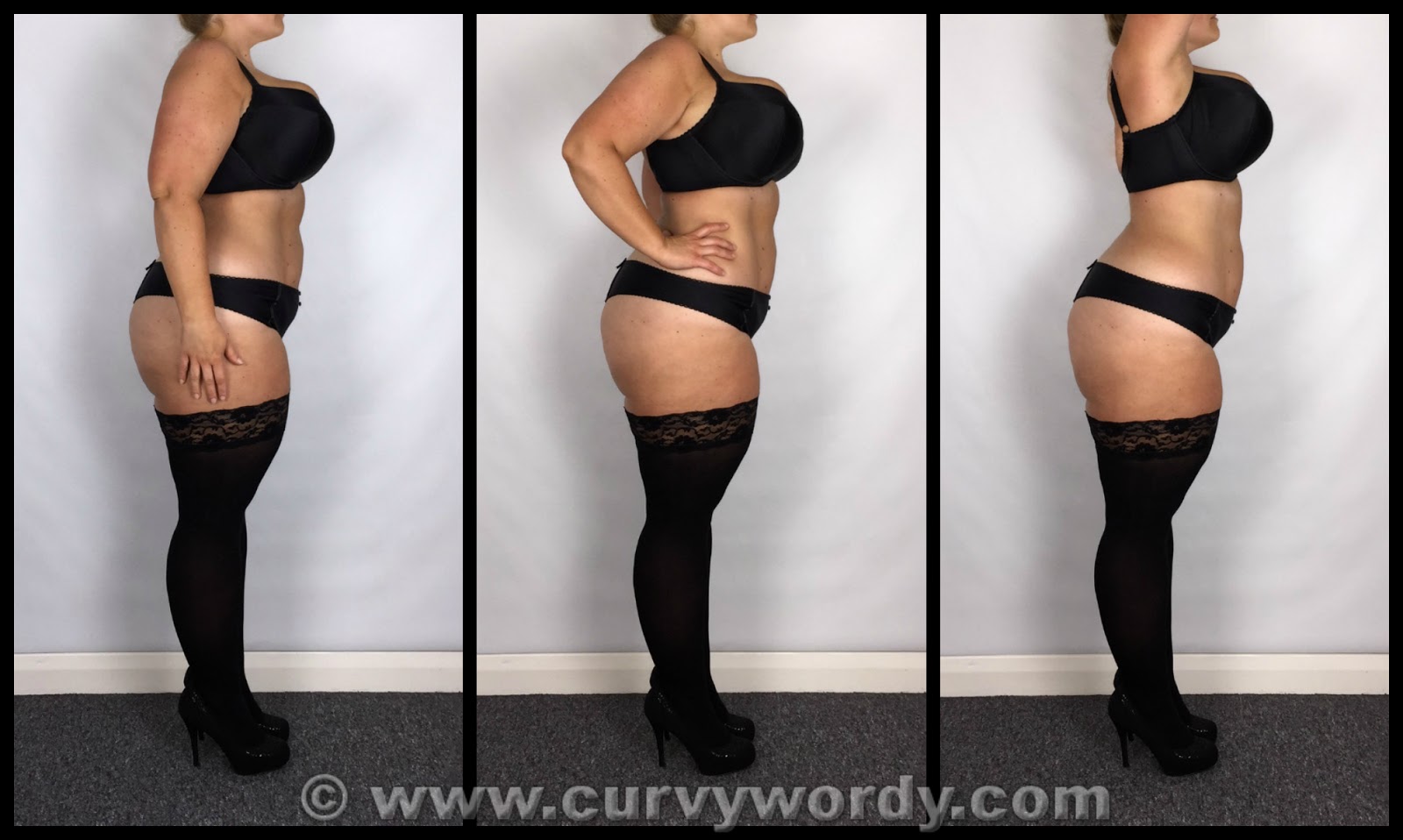 When you wear a bra it is essential that the central gore – the section at the front where the ends of the wires sit – is flush against your chest. If it is not, the bra is most likely too small for you in the cup. If this is all getting a bit confusing, you might find my post on bra fitting helpful – read it here. The central gore on the Ewa Michalak S Przeplatanki Bra sits perfectly flat against my sternum and is very comfortable. Some women complain of a gore that pokes and chafes them; again this may be down to wearing the wrong bra size, but I am pleased to report that I have never experienced this issue with EM bras. I think it’s partly because of the amazingly deep cups and also the fact that the gore is narrow and not particularly high.

A bra’s wires can cause all sorts of problems, including digging in under the arms. Ewa Michalak bras have narrow wires so they shouldn’t do this, and again this is something I have never had a problem with when wearing EM bras. The wires don’t quite reach round as far as my armpits, and the wires are short so there is no chance of them poking me. 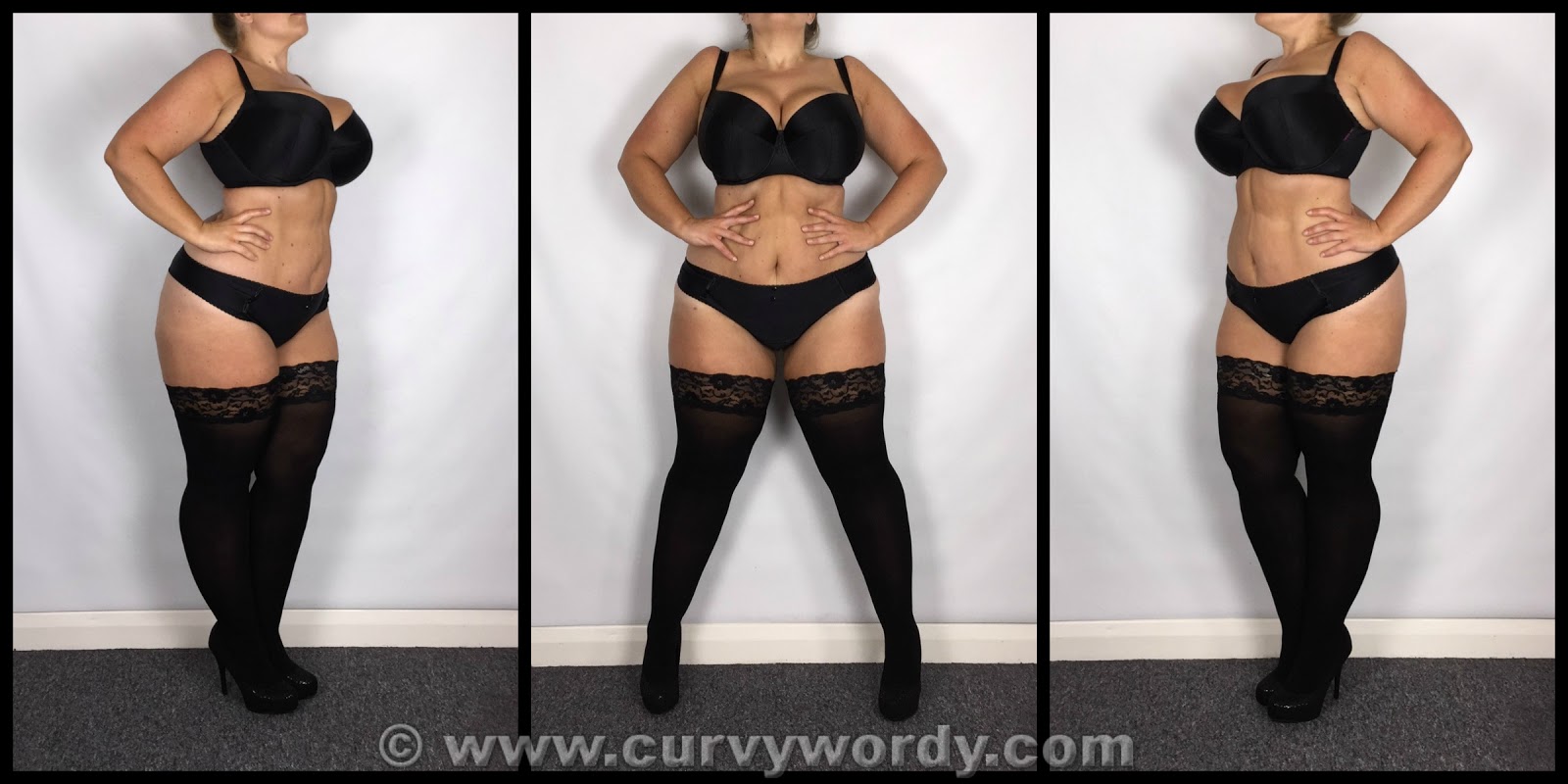 The Ewa Michalak S Przeplatanki Bra’s band fastens with four rows of three hooks and eyes. It runs true to size and is fairly firm, so if you are thinking of ordering I would recommend going with your usual EM band size. The shoulder straps are wider than usual to allow for the hooks of the harness straps to be attached, but more on that later. The shoulder straps adjust about halfway, and although it might be possible to push the adjuster beyond this point I don’t think it would go very much further as the straps widen and thicken due to the added loops for the strappy straps. 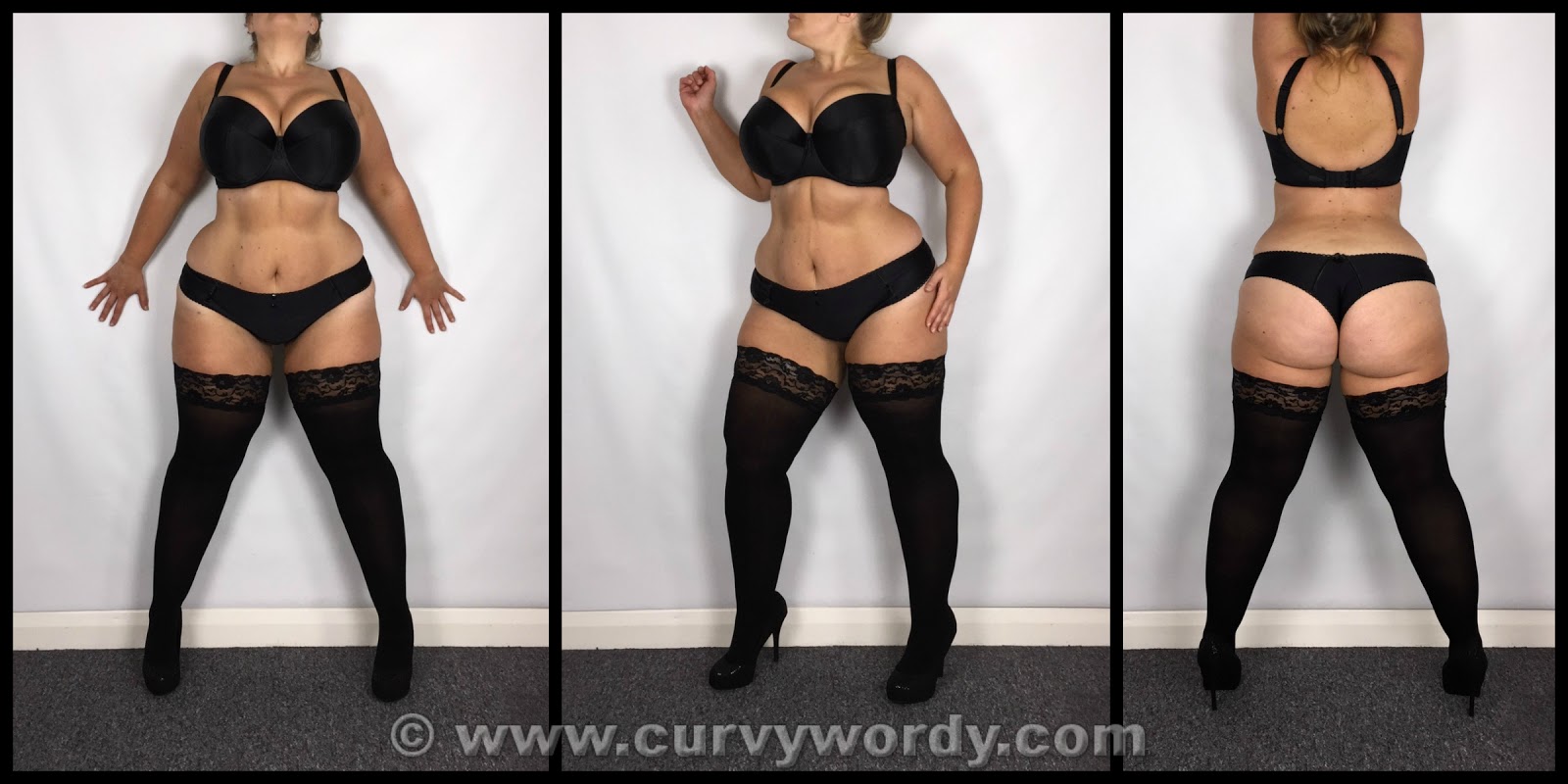 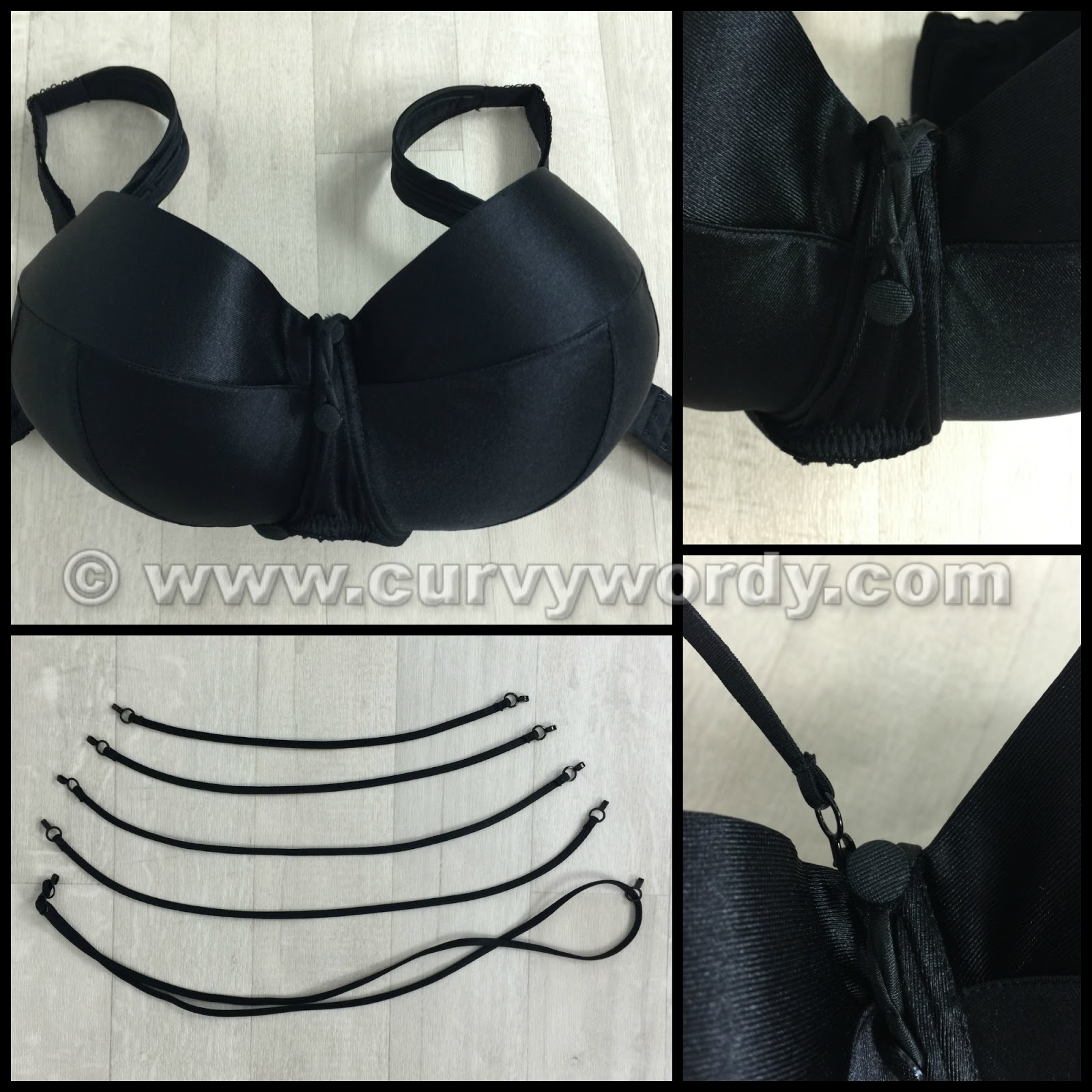 The beauty of this bra is that it can be worn either as a regular bra, or as a strappy halter bra. There are a few clever features to enable the wearer to add the straps if required. The bra is supplied with five straps of varying lengths, and these can be used in a variety of ways to make a seemingly never-ending range of looks. The straps have small hooks on each end, and the hooks have small loops above them so that other hooks can easily be joined on as well, giving yet more strap combinations. 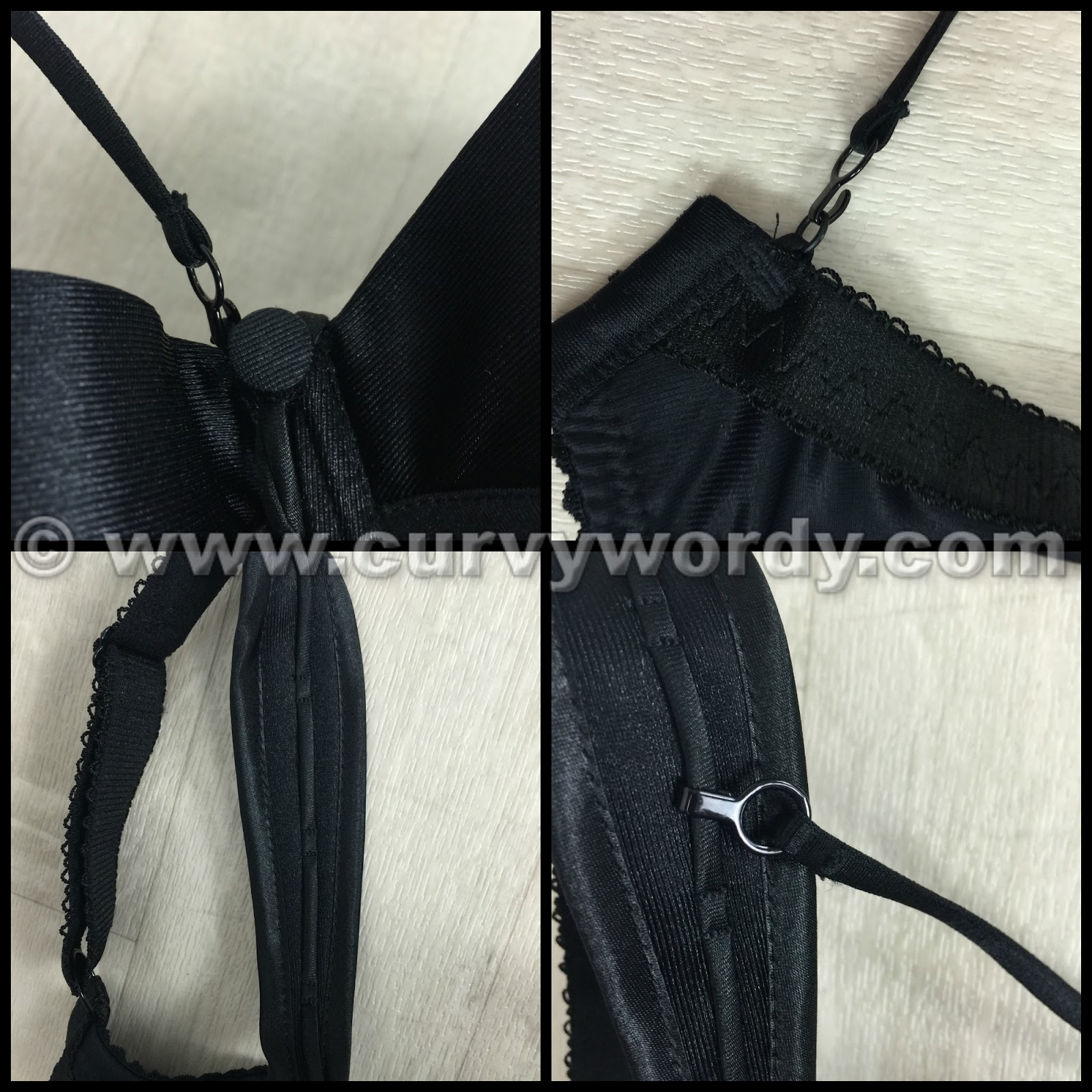 One end of the strap is attached to the central gore – either on the gore itself or by pulling up an extension from the central gore to provide a joining point further up the chest (see photo below) – and the other end is hooked onto the shoulder strap where there are loops of material attached down the centre of each strap. There are also loops attached to the bra band near the hook and eye fastening at the back so that you can create strappy patterns on your back and extend them to the front if wished. 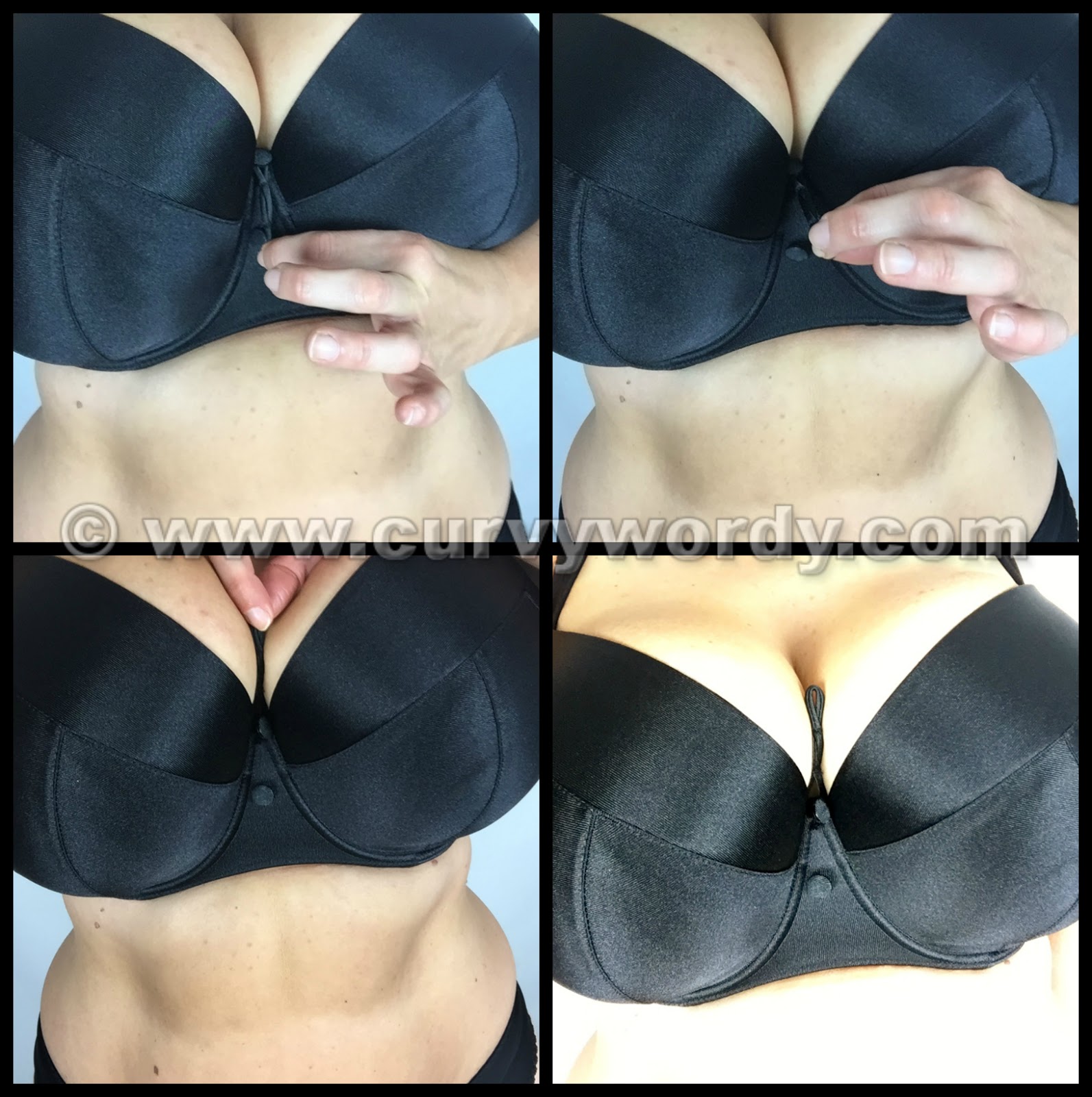 After that, it is pretty much down to you to make shapes and lines with the straps as you wish. You can find inspiration online, or just freestyle, which is what I did. 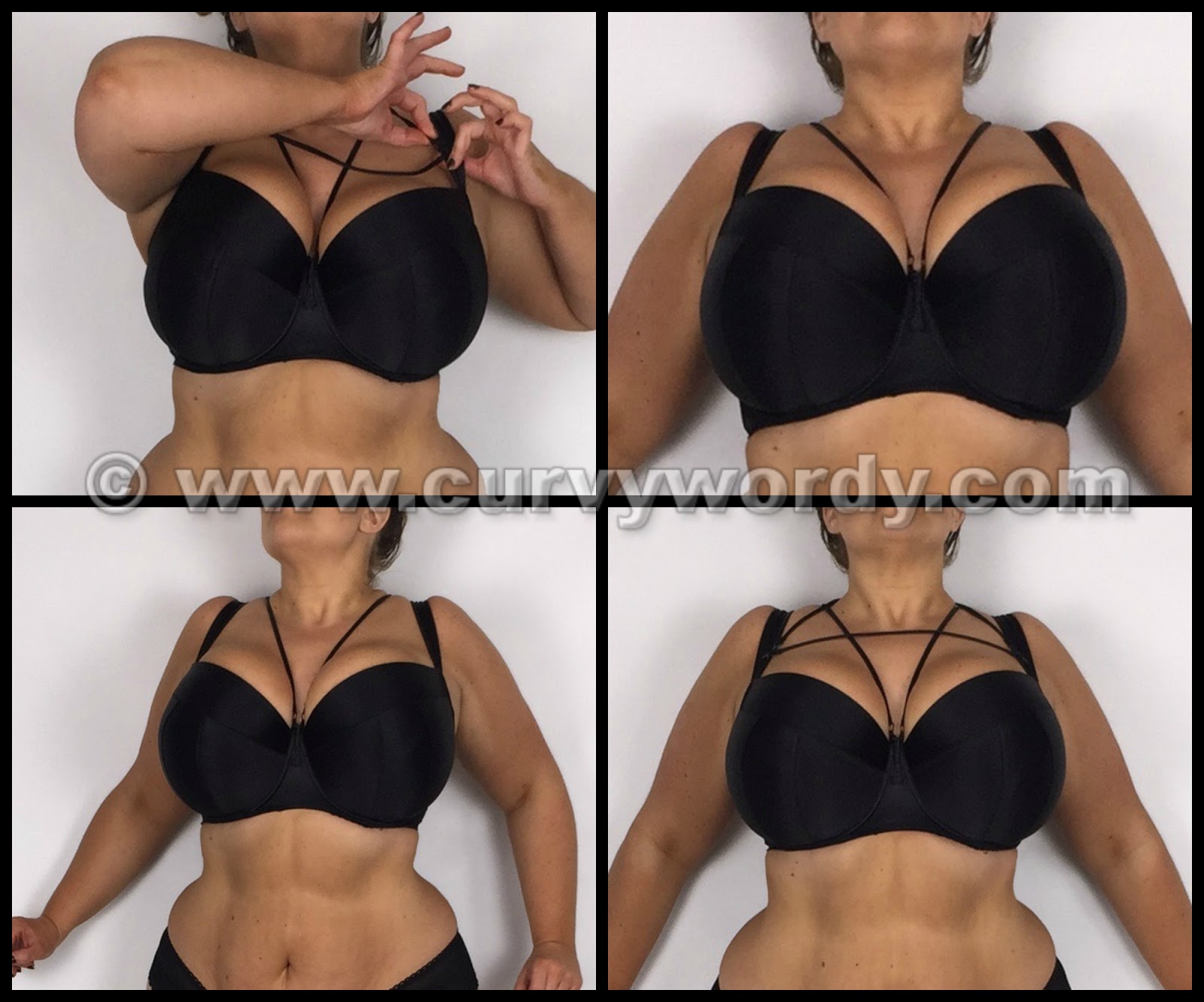 You can use the straps on the front, or the back, or a mixture of both. 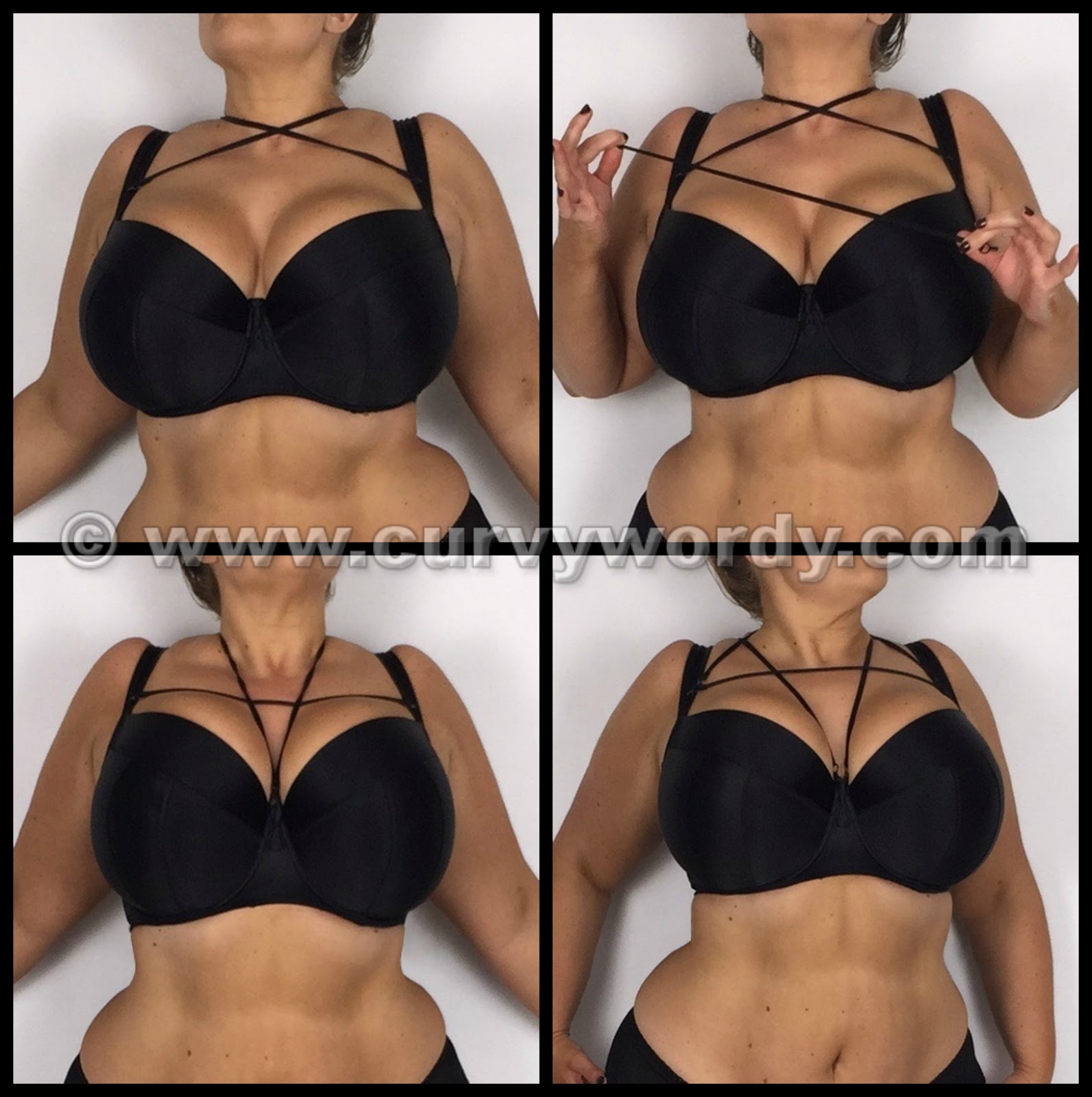 Some of the ways you secure the straps might not be comfortable for wearing over a long period of time, but they certainly look good! 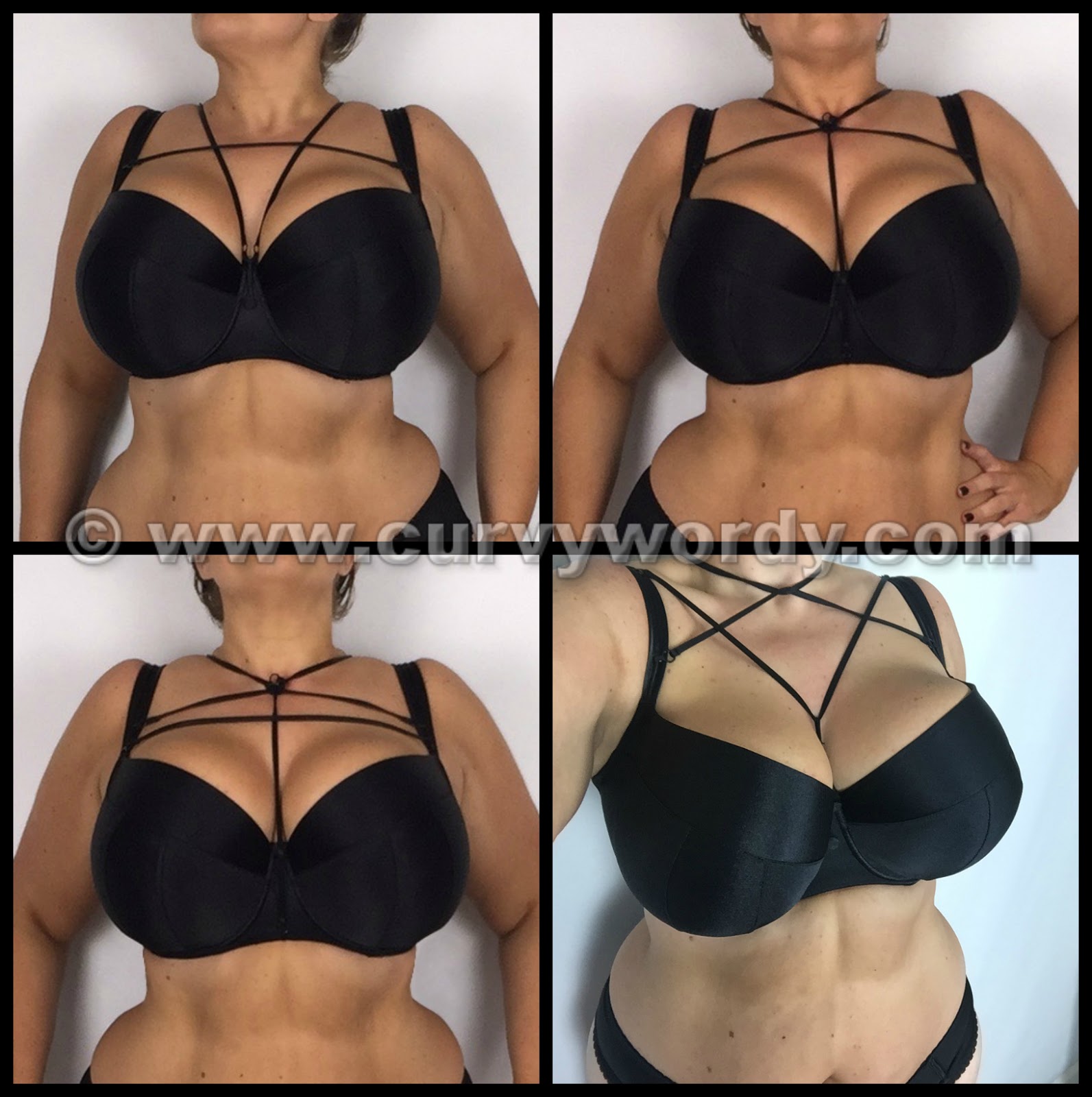 What is it about straps on one’s body that is so flipping cool? And so sexy?! I really enjoyed creating these strap patterns and could have gone on for much longer but I had to stop so that I could get on with writing this post.

I wanted to share with you some full-length pictures to show you how the straps can change the look of not just the bra but the whole lingerie set so dramatically.

This is a simple, basic black bra. It’s amazing how by adding a few straps it can look completely different.

I wore the S Przeplatanki out with the harness straps in place for the first time on my recent holiday to Spain with fellow plus size bloggers Mookie and Leah – you may have seen the pictures on my Instagram account (if not, do make sure you are following me here). 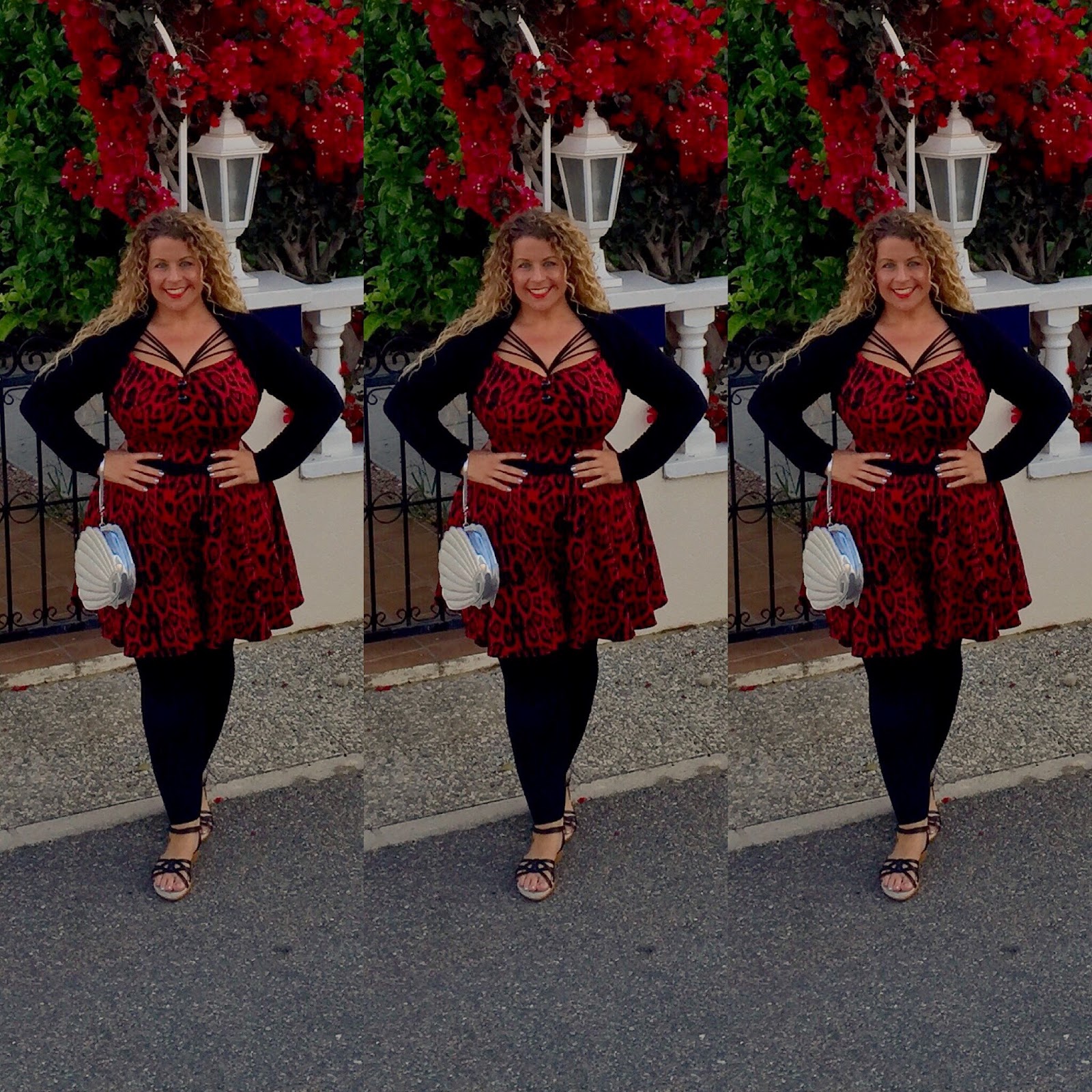 I am not sure I’d be bold enough to wear the straps if I were on my own, as they are quite attention-grabbing, but the lovely Leah and Mookie gave me the confidence to wear them on the last night of my holiday with this dyed Dolores Doll dress from Collectif. 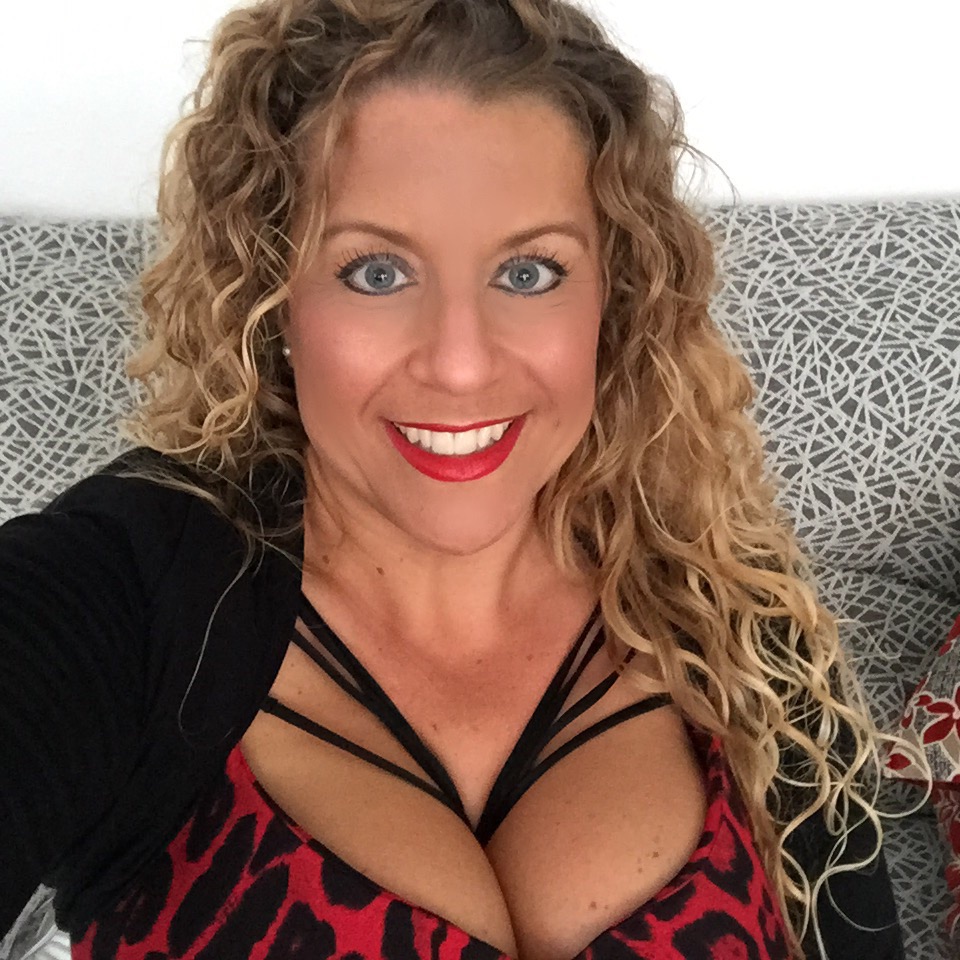 I think that’s quite enough photos for one post! Sorry there are so many but I got carried away and wanted to show you lots of different options.

So the Ewa Michalak S Przeplatanki Bra is a big hit with me, both as a regular everyday bra and also as an option for special occasions. I am pleased Ewa has embraced the strappy trend and she has extended it to other bras, briefs, and even swimwear. Look out for more reviews here in the future!

Do you own any strappy lingerie? Tell me in the comments below.