I am often asked by my readers what can be done to alleviate bra band chafing. This is something I myself have suffered from time to time so it made sense for me to trial some kind of solution and review it on my blog. Of course, the best solution is a correctly fitting bra – see my post here for tips on how to find a bra that fits you properly – but even then there may be days when your bra causes irritation and so it is good to know of a way to deal with this if needs be.

After a bit of digging round on the internet, I discovered Pambra’s (no, the apostrophe is not incorrectly placed!). They are touted as ‘the original bra liner (since 1988)’ and are made by an American company. 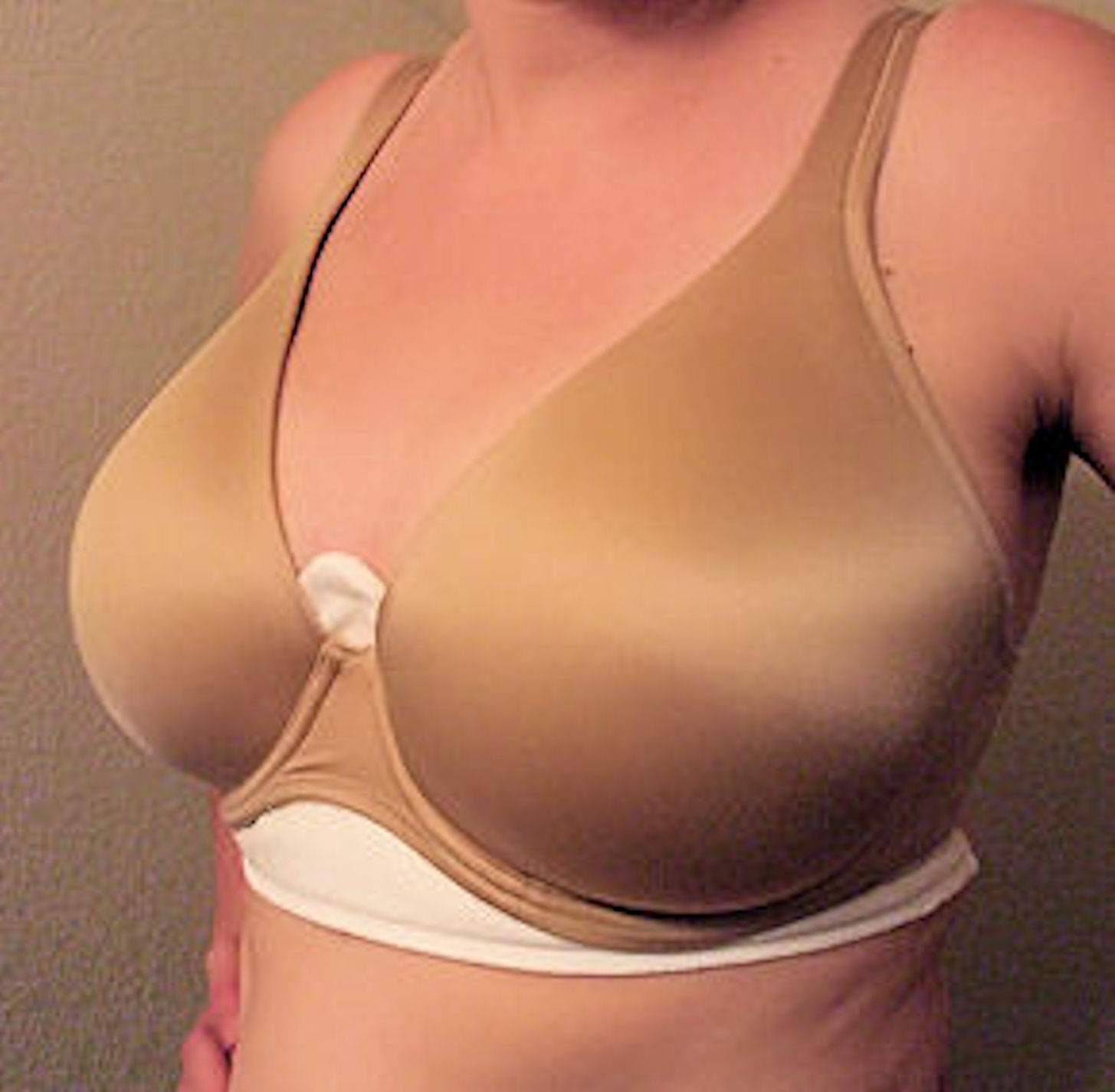 The website describes Pambra’s: The Original Bra Liner as follows:

A soft cotton bra liner designed to absorb perspiration under and between the breast. Pambra’s also add comfort to under wire and irritating elastic. Wearing Pambra’s has been proven to reduce moisture that causes skin rashes and extends the usage of your bra. Anyone suffering from an unknown rash or fungus should consult a doctor prior to using Pambra’s, The Original Bra Liner that really absorbs BOOB SWEAT.
Effectively absorbs perspiration under and between the breasts.
Extends the usage of your bras.
Keeps skin drier to prevent chafing and irritation.
Prevents wetness from seeping onto brassiere and clothing.
Now providing Nursing & Post-surgical options!

The liners are not available for sale on the website but they do have a ‘Where To Buy‘ page, and from there you can see a list of online retailers, ideal for those of us based outside the USA. I approached Lady Grace Intimate Apparel, and they very kindly agreed to send me some Pambra’s to try for myself. 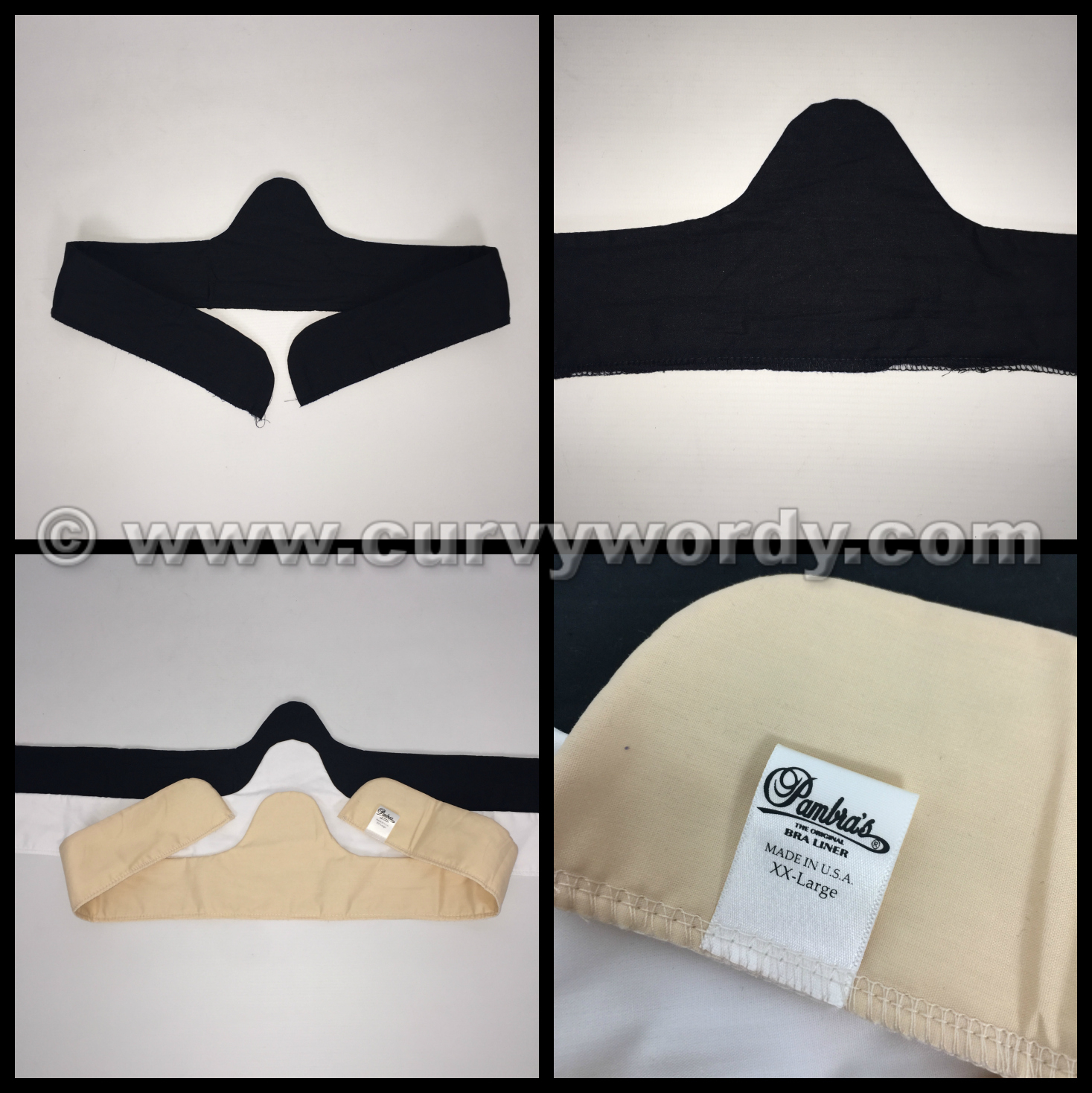 Pambra’s are sold in packs of three, with one colour per pack from a choice of white, black, or nude. They come in a range of sizes as follows:

Actual fit will depend on how far you want the liner to go across the rib cage. As you can see from the table above, a 36″ Pambra’s: The Original Bra Liner is recommended for a bra band size 48-50, so the liner is not intended to line the entire length of the band. However, I wanted to try one that would fit under the whole length of my bra so I asked for the largest size – XX-Large – from Lady Grace Intimate Apparel. 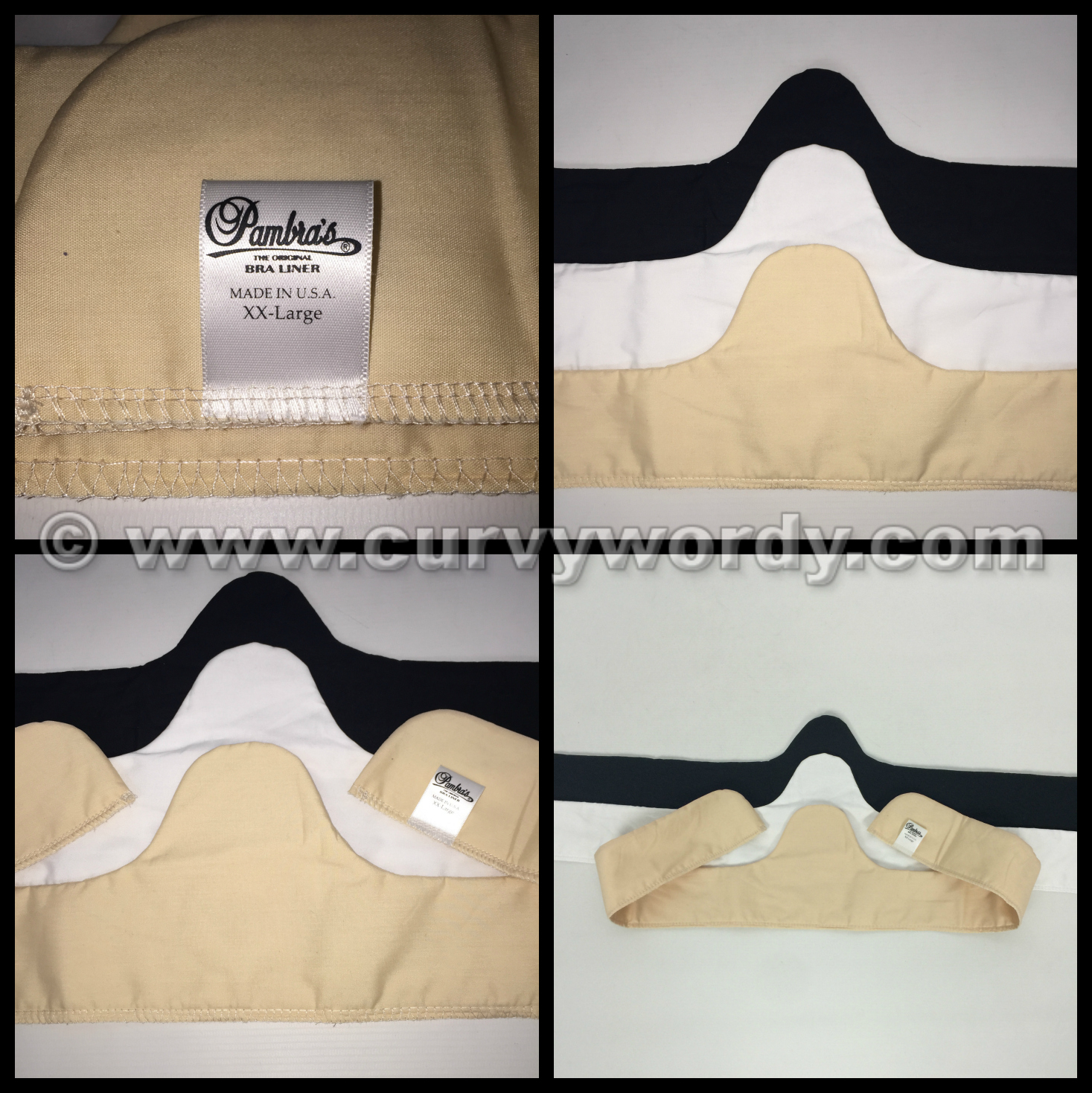 Pambra’s bra liner is a very simple concept: a strip of soft cotton fabric shaped in a particular way and filled with absorbent lining. The idea is that the main portion of the liner fits underneath the bra’s band, and the taller part should be placed underneath the central gore. The liner will then absorb sweat and provide padding to minimise and hopefully even eliminate bra band chafing.

I wasn’t sure how best to put on my bra liner to begin with, so I tried a few different ways and in the end found it was simplest to tuck the liner into place once I had my bra on. There is a great video guide showing how easy it is to do this on the Pambra’s website here.

For reference, in the following photos I am wearing the black Pambra’s: The Original Bra Liner with my Ewa Michalak FB Tęczowe bra and matching briefs, my Kix’ies Lois Holdups, and some black heels from George at Asda. 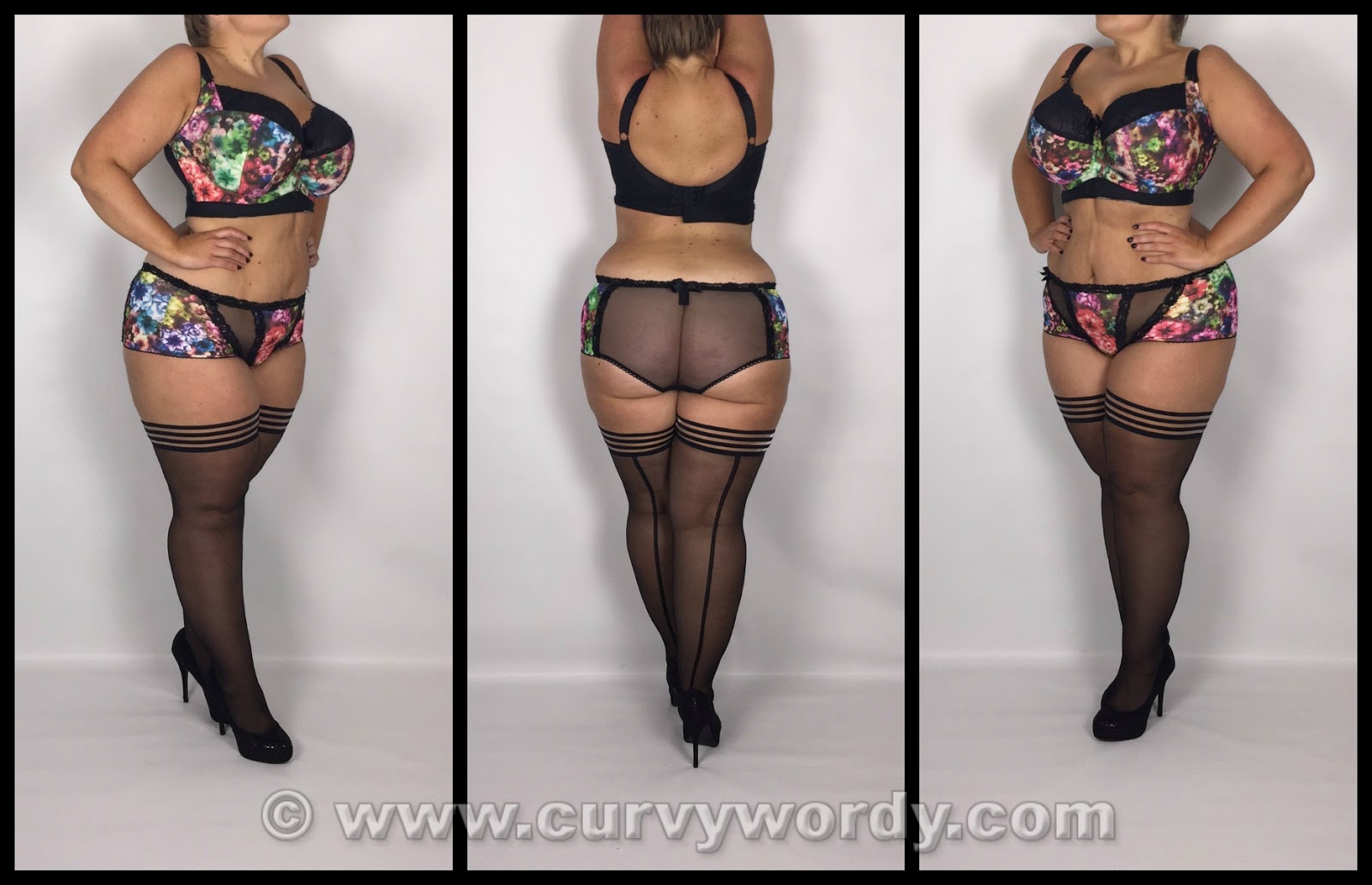 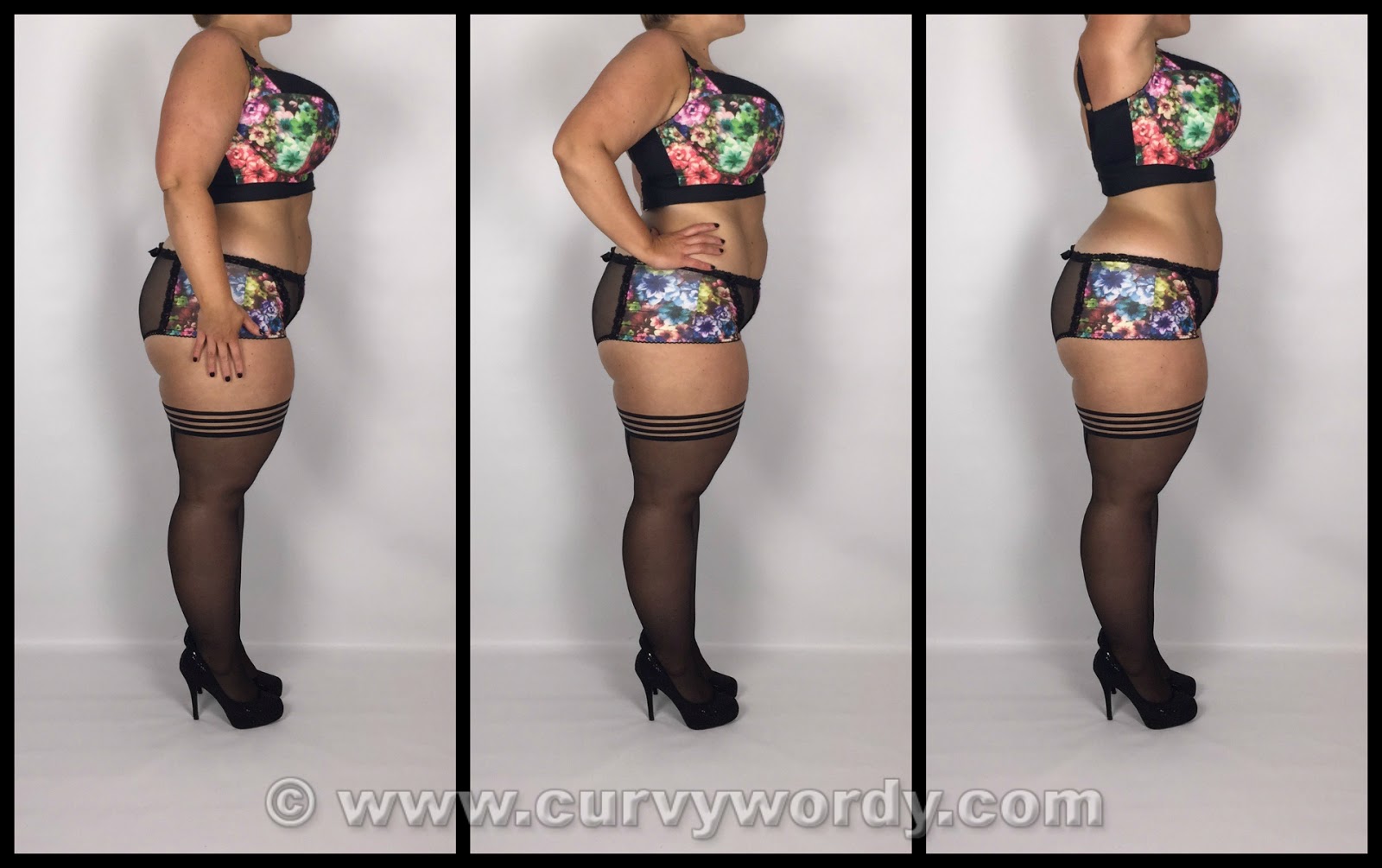 In these photos I have teamed the white Pambra’s liner with my Ewa Michalak S Letnia Noc bra and matching briefs, my Prague Lady Lace Hold-ups from The Big Tights Company, and some nude heels from Internaçionale. 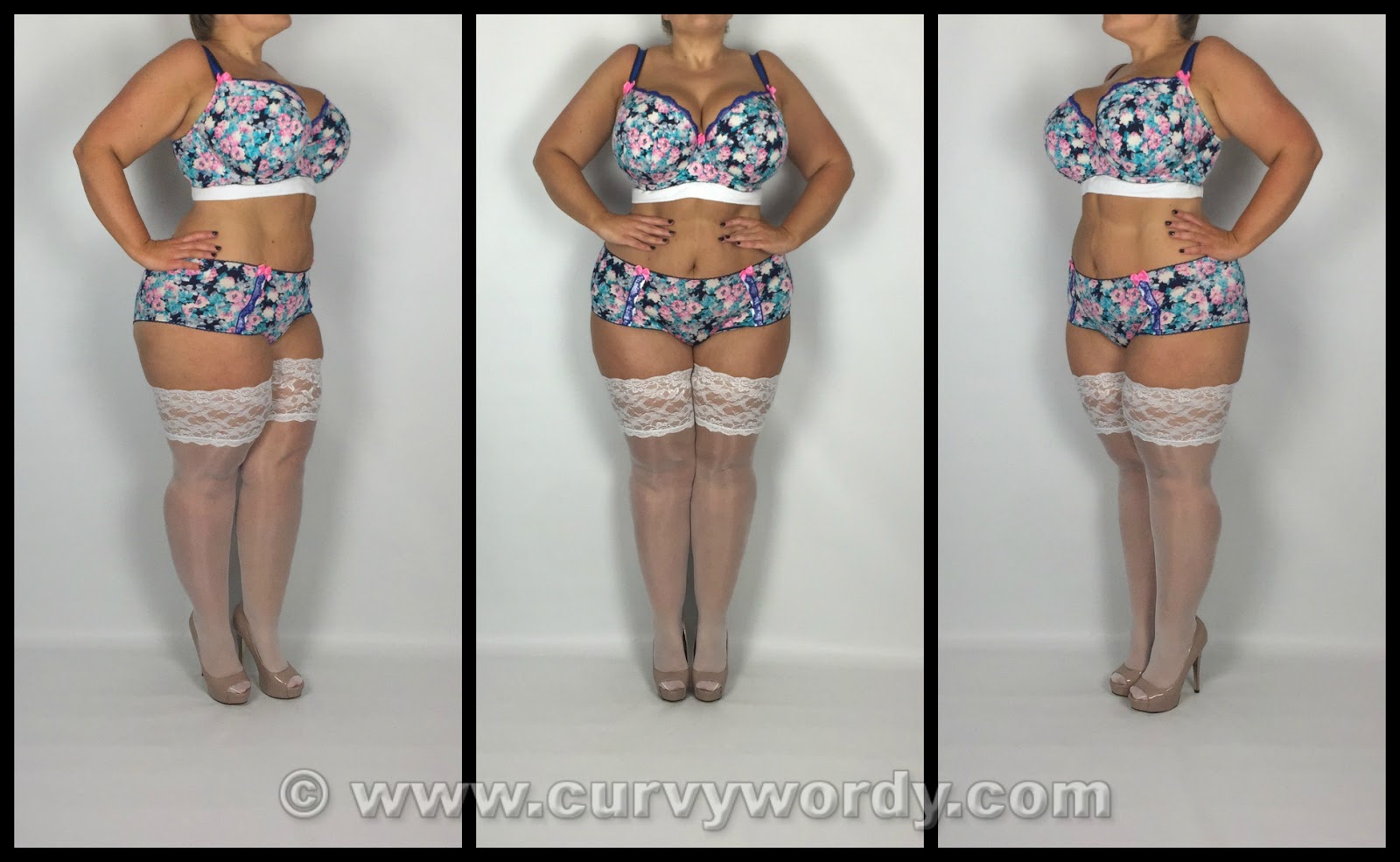 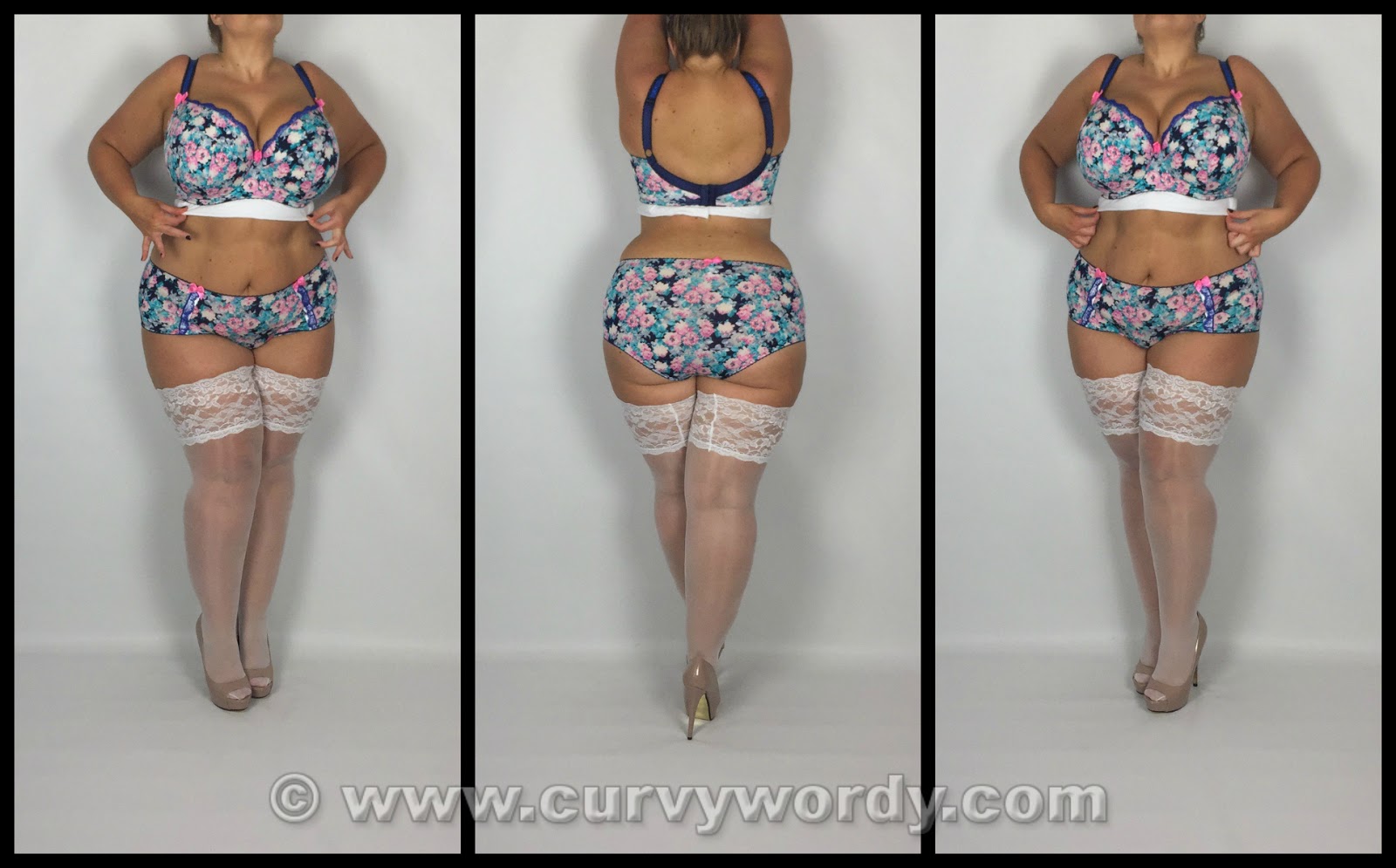 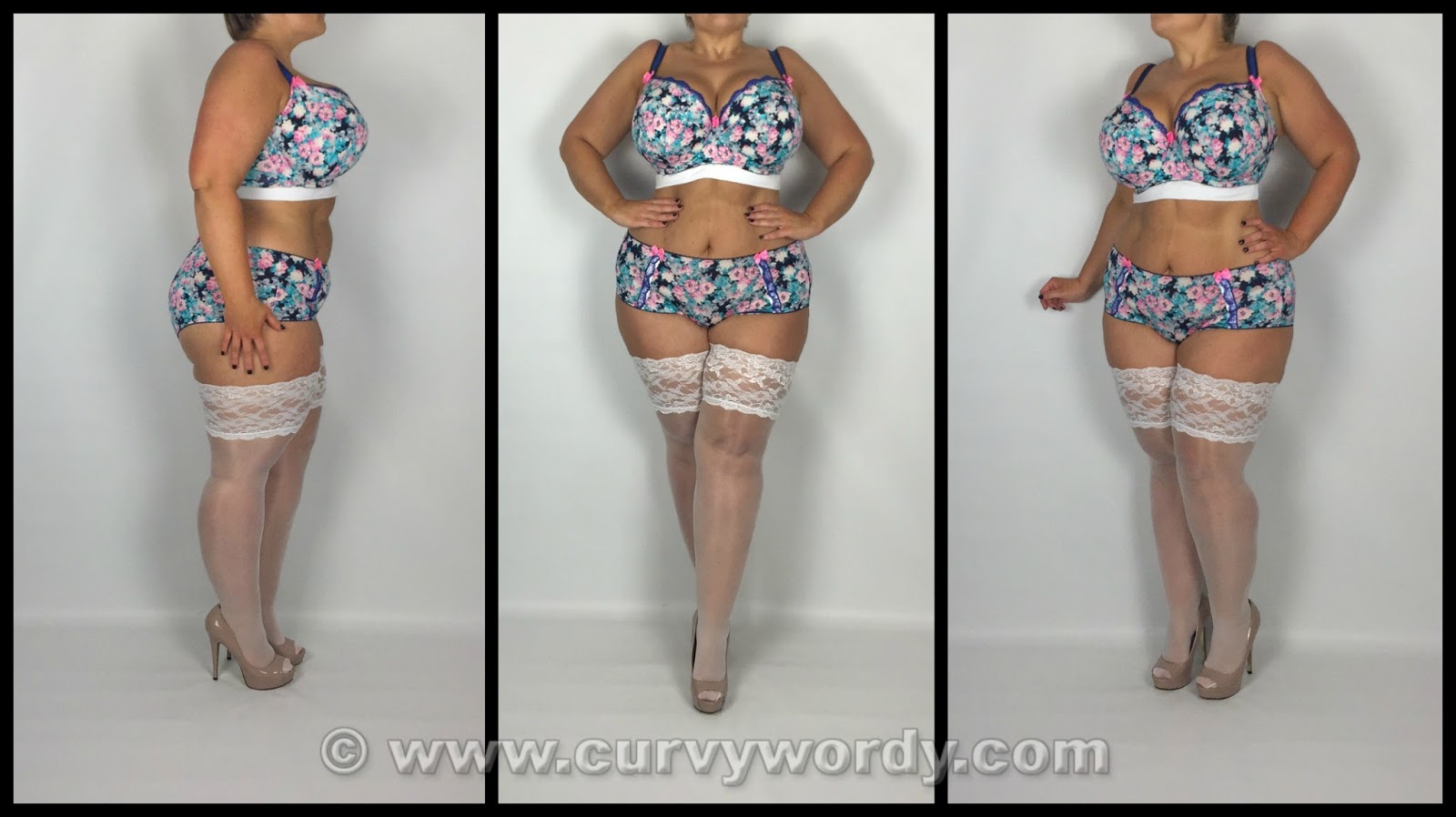 Finally I paired the nude Pambra’s bra liner with my Ewa Michalak S Granatowa Pantera bra and matching thong, my Kix’ies Lois Thigh Highs, and some platform heels from eBay. 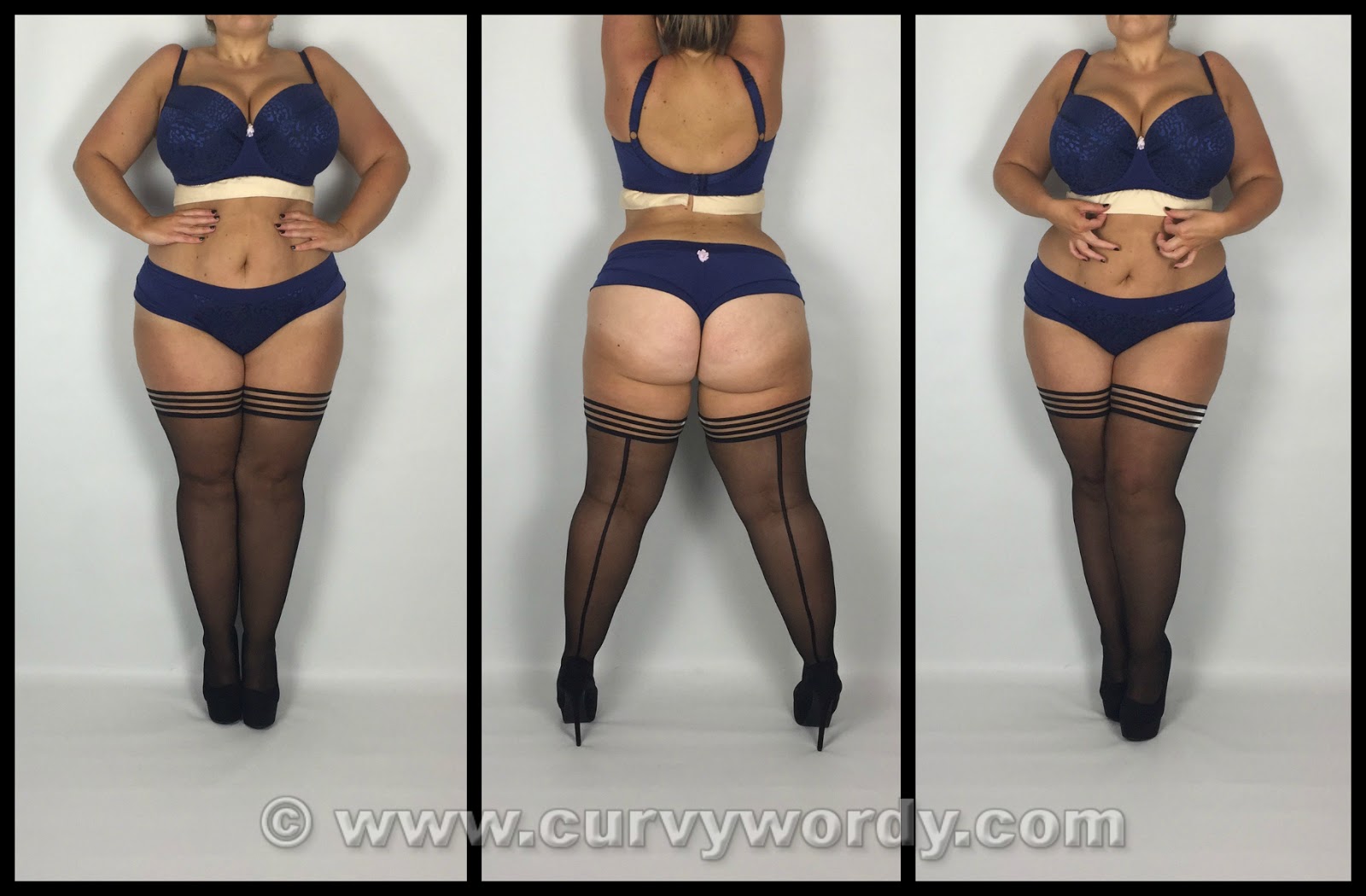 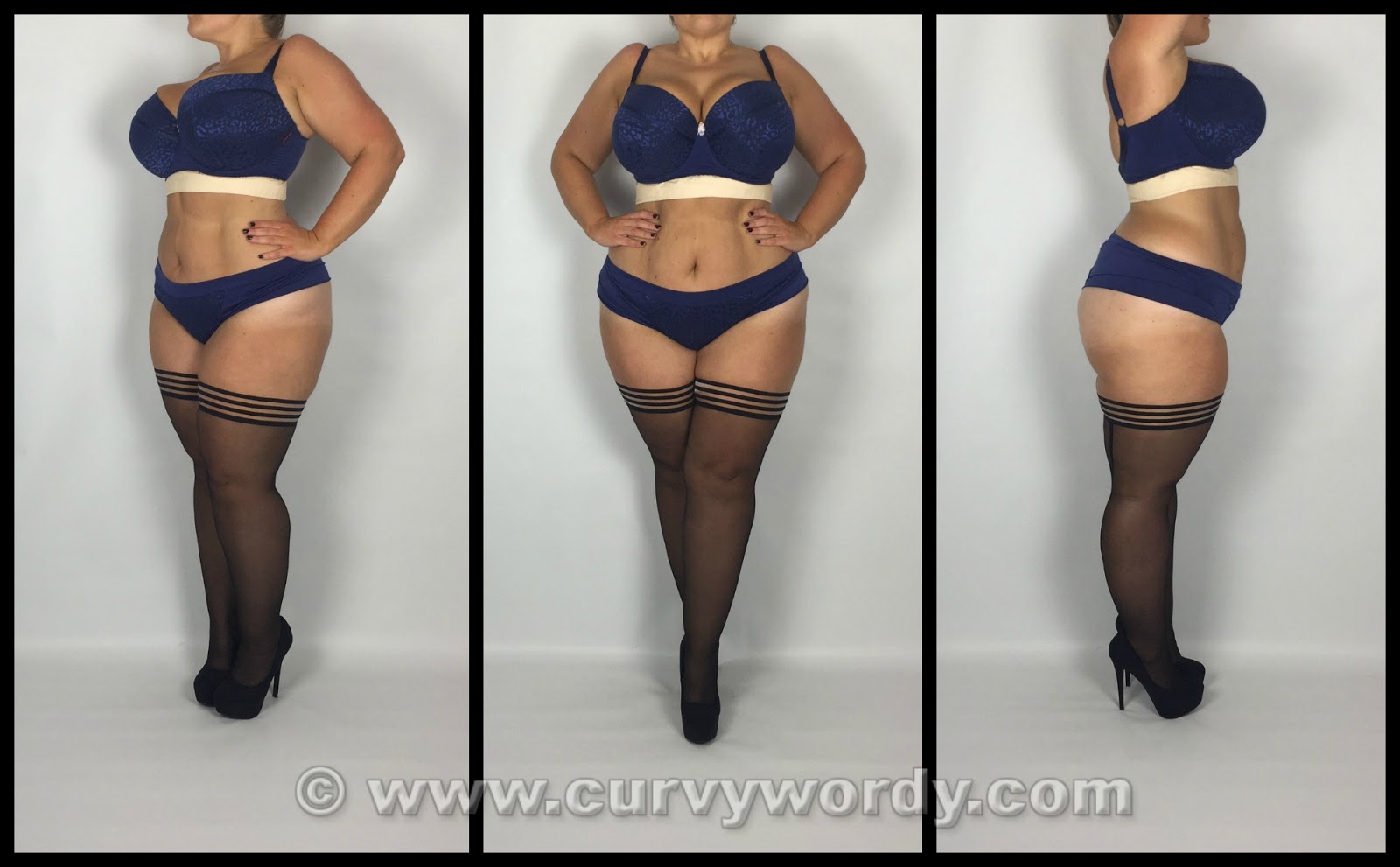 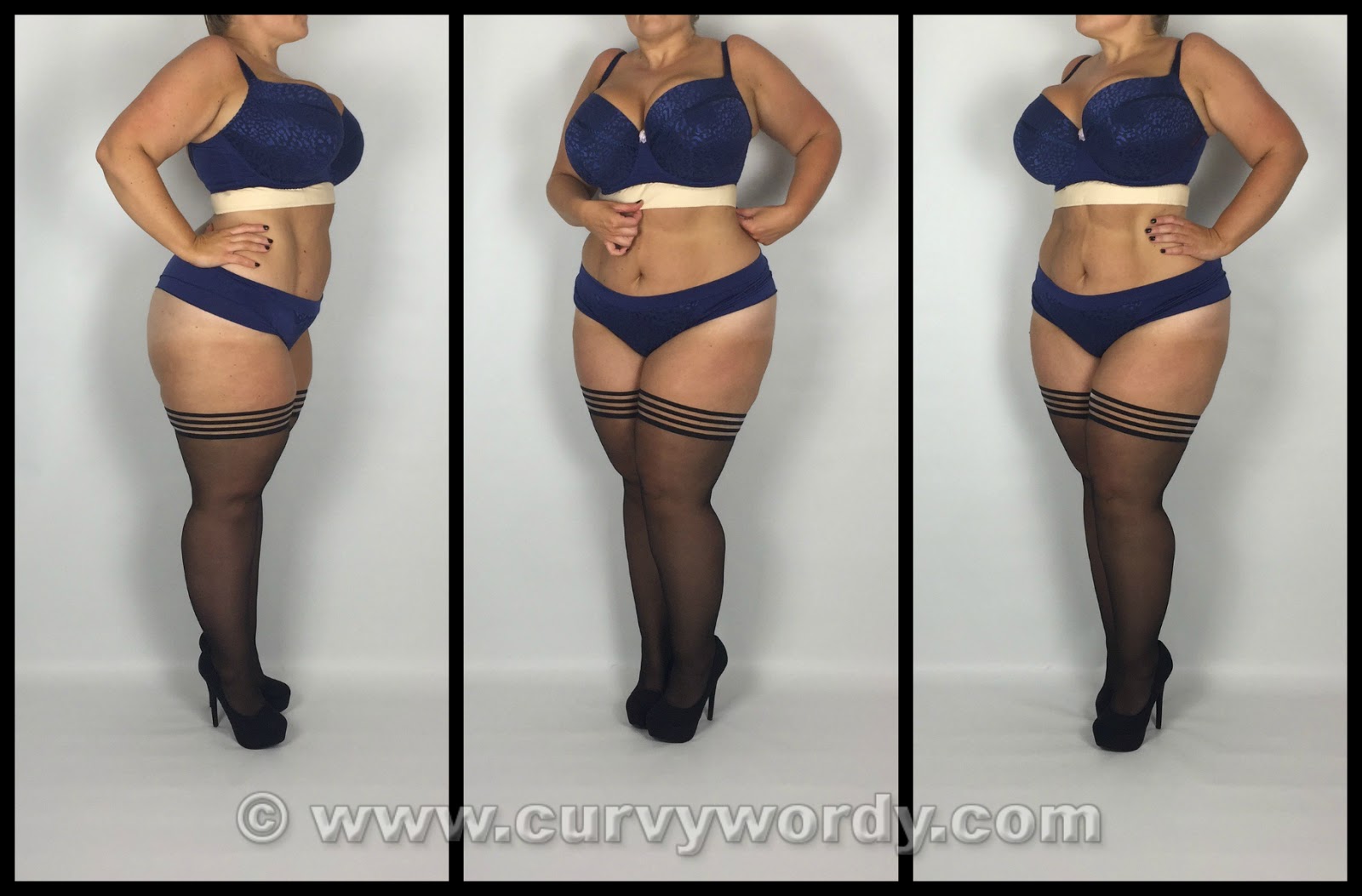 I have worn the Pambra’s liners on a number of occasions and I have found that they work very well at stopping one’s bra band rubbing. They also wick any sweat away from the skin, which means that the risk of chafing is minimised, so they are perfect for wearing on hot days.

I liked the longer length of the Pambra’s bra liner and I think if I’d ordered the size recommended for my bra size – small – the short length would have annoyed me where it stopped somewhere under my arms instead of fitting all the way round the band. I have positioned the liner a little lower than I’d actually wear it in ‘real life’ so that it is clearly visible in the photos. Normally it would be tucked more into the bra’s band. You can also see that in some pics I have positioned the liner more tidily and neatly than others – again, when wearing the liner on a day-to-day basis I would take more time to tuck it in properly and make sure it was just right.

That said, I did find some issues with the length of the liner. As there was nothing attaching the liner to the bra band it fell down during wear. It did it when taking the photos for this post, and also on the occasions I’ve worn the liner for road-testing. The front seemed to stay put pretty well as long as it was positioned properly to begin with, but the section around my back regularly worked itself free. It is because my back – as I’m sure most people’s does too – arches in at the spine so there is nothing for the band to sit against. This isn’t a problem for a bra because it is fastened around my body but the liner needs two things to hold it in place: my body and the bra band, and without both it will fall out. This must be the main reason that Pambra’s recommends a smaller size so that where the liner only goes partway round the body it will not move out of place.

I am in the fortunate position where I don’t have the need to wear a bra liner but if I did I think I would be tempted to either loosely stitch one in place on each of my favourite bras or find a way of securing it without ruining the aesthetic of the bra. Fortunately the liner makes the bra look like a longline design, so it’s not immediately obvious what it is, but if I was attaching hooks and eyes or some other way of keeping the liner in place I would be careful as to how I did it so that the look of the bra was not spoilt.

On a couple of occasions when wearing one of my Pambra’s liners I found you could see the outline of them through my clothing. This is another example of where it’s really important that one takes the time to ensure the Pambra’s liner is in the correct position when first putting it on, and then to check it during the day.

All the minor issues I have experienced can be solved by careful and purposeful use of the liner, ensuring that it is in exactly the right position throughout wear. I cannot think of any ways in which the design of the liner could be improved so it is up to the wearer to make sure they are using it correctly to get the best results.

Pambra’s: The Original Bra Liner is a great solution for anyone who experiences discomfort from their bra band. I would strongly recommend making sure you are wearing the right bra size first, however, but if you definitely are and you are still experiencing issues, this is a fantastic option to try. You can buy Pambra’s bra liners from Lady Grace here (they ship outside the US as well!).

Have you ever tried a bra liner? Did it work for you?